Ranking Kinds of Onions by How Healthy They Are

Scallions? Leeks? Cocktail Onions? Which will make me feel better about drunkenly slamming seven cheeseburgers at this upcoming family barbecue?

Sure, meat is the highlight of barbecue season. But I’d say what you put on that meat has a place in the food hall of fame, too — and more than just about anything else, some glistening onions make a killer topping.

Onions come in many shapes and sizes, though, and assuming you want to keep your toppings healthy — since those burgers and hot dogs are the exact opposite — I asked dietician Abbey Sharp, author of The Mindful Glow Cookbook, to help me rank all kinds of onions by how healthy they are, from superfood to deep-fried death.

Here’s what she came up with… 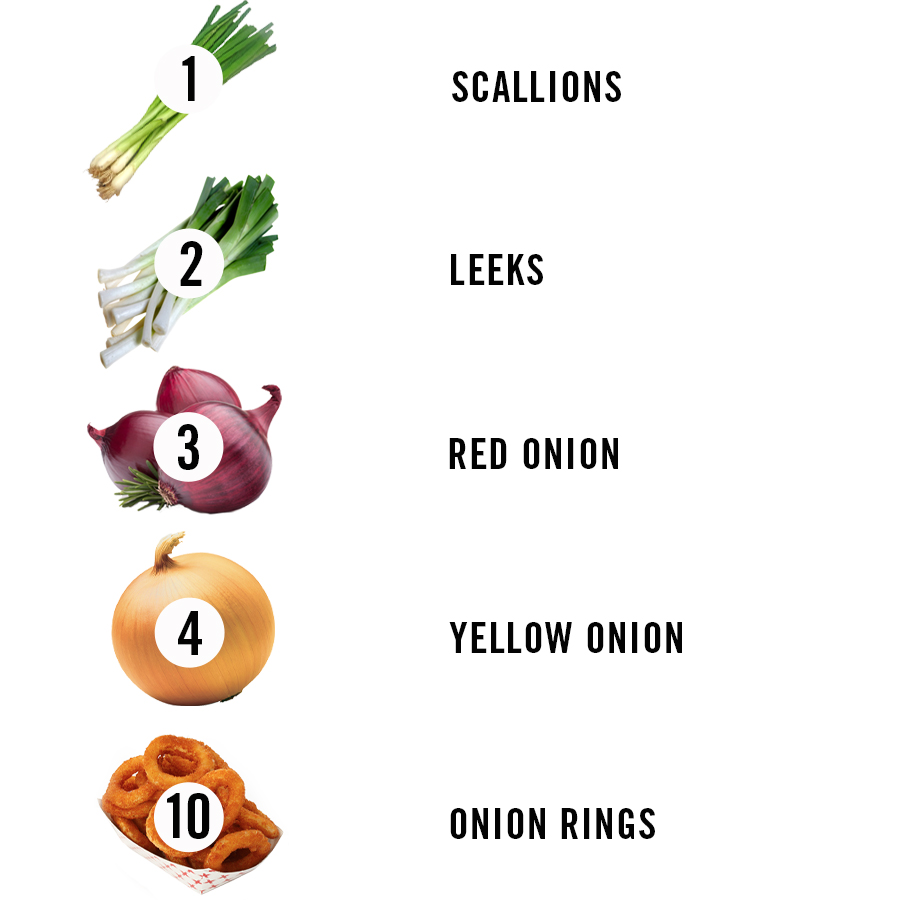 1) Scallions: Scallions often have a sweeter (and milder) flavor than their more mature counterparts, making them a safe addition to all sorts of dishes. They also happen to be especially nutritious. “With four grams of fiber per 100 grams and 50 percent of your daily vitamin C, these are a great choice,” Sharp confirms.

2) Leeks: Similar to scallions, leeks sport a milder, more delicate flavor than more mature onions. Cooked with a low heat — like in sauces and soups — leeks can contribute to a flavorful base for most dishes.

When compared to scallions, Sharp says, “Leeks are also a lower-calorie, lower-carb option with high amounts of vitamin A and vitamin C.” Besides sporting those same antioxidants common in onions, leeks may also improve high blood pressure by encouraging the production of nitric oxide, a natural gas that dilates blood vessels.

3) Red Onions: These are perhaps a bit milder than yellow onions and are often served raw — in the likes of salads and salsas — since cooking can reduce their attractive red complexion. That complexion also contributes to their nutritional value, according to Sharp, who says red onions are “higher in antioxidants compared with white onions thanks to their red hue.”

4) Yellow Onions: A popular all-purpose option, yellow onions boast a balance of astringency and sweetness (and they can become even sweeter when cooked). These onions also have a meaty texture that makes them a solid burger topping. Nutritionally speaking, yellow onions sport many of the same benefits mentioned above, but in lesser amounts compared to those higher up. Sharp specifically mentioned that they contain more antioxidants than white onions, speaking of which…

5) White Onions: These tend to have a sharper, more pungent flavor than yellow onions, which explains why they can often be found diced and mixed into the likes of flavorful salsas and sauces. Healthwise, Sharp says that white onions are “a good standard option.” In other words, they possess some of the healthy compounds mentioned above, but not enough to be considered a superfood or anything.

6) Sweet Onions: These lack the sharp astringency that many onions exude, but they make up for it with unparalleled sweetness. As such, these are often sliced thin and served raw in salads or as a sandwich topping. However, sweet onions are substantially less healthy than those sitting atop our list, since they hold more sugar and fewer beneficial sulphurous compounds, like those cancer-busting organosulfur compounds, according to Sharp.

7) Pearl Onions: These are simply regular onions whose growth was stunted in the fields. Both mild and sweet, pearl onions are often served on their own, roasted, pickled or glazed. The problem with pearl onions, according to Sharp, is that they can boast high amounts of sugar, even more so than sweet onions. None of that means these are plain unhealthy, but they hold little against the nutritional powerhouses up top.

8) Shallots: Shallots are particularly useful as a seasoning, since they can impart both a mild onion flavor and a sharp tartness. While still healthy, Sharp explains that shallots could be healthier. “Like pearl onions,” she says, “these are also higher in carbs and sugars, and lower in fiber.”

9) Cocktail Onions: These are usually pearl onions that have been pickled in brine, often with some added turmeric and paprika. While delicious, that brine is the worst part, healthwise — as Sharp explains, it increases the sugar and salt content.

10) Onion Rings: Yeah, these suck. “Onion rings are typically battered and fried, so they’re high in fat, salt and refined carbs,” says Sharp. But you already knew that deep-fried foods can — and will — kill you.

So there you go, I hope you learned something. Now please enjoy this video of a girl munching on a whole raw onion while Smash Mouth plays in the background.