Ranking Honeys by How Healthy They Are

Anyone with a honey should celebrate them on Valentine’s Day, but we should also celebrate actual, edible honey, because if it’s good enough for Winnie the Pooh, it’s good enough for you, goddamnit. So, grab your honey and some honey (hawt), and come along as I try to convince Dana Hunnes, senior dietitian at the Ronald Reagan UCLA Medical Center, to help me rank various kinds of honey by how healthy they are — from somewhat healthy in moderation to, well, maybe a little less healthy in moderation.

Immediately, Hunnes says, “This reminds me vaguely of the salt story you did,” which was, admittedly, pedantic as hell, because salt is, well, salt. So, not a great start.

Nonetheless, there are certainly a few things to keep in mind about honey if you want to make good choices. For starters, as Hunnes explains, “Honey is derived from the nectar of various flowers or flowering plants.” More specifically, bees flutter over to these plants, guzzle up a whole bunch of nectar and store it in their so-called honey stomachs, where digestive enzymes begin the process of changing complex sugars into simpler ones, like glucose and fructose. Then, the bees puke that nectar into the mouths and stomachs of other bees — several times over — where even more digestive enzymes are added to the mix. Eventually, this consolidation of bee barf is stored in a hive, where it can thicken up and become all gooey. (Seriously, you can see all of this in the video below, and yeah, honey is basically just a bunch of bee puke.)

Now, the reason I took the time to explain all of this is because (1) at the end of this process, as Hunnes explains, honey is primarily just sugar, like glucose and fructose, with some traces elements; and (2) any minor differences between honeys boils down to the plant that the bees drank the honey from — which includes how healthy that individual crop was, where it was grown, whether it was a species within a species and so on. “It all originates from the plant itself, and their various nectars decide how nutrient-rich the final product will be,” Hunnes confirms.

In simpler terms, unless it contains a bunch of added ingredients, nutritionally speaking, most honey is just sugar, for all intents and purposes, but you might also get a random batch that has some extra trace nutrients or whatever. And when you consider that there are more than 300 different kinds of honey in the U.S. alone, all of that makes this a tough ranking.

We can still make some small distinctions, though. “Their differences are slight at most, and primarily a taste thing, but for very few, there might be a more pronounced difference,” Hunnes says. “The one that comes to mind is manuka honey, since the manuka plant, when turned into honey, has antibacterial properties. Though, other honeys may as well.” (More on manuka honey in just a moment.) Moreover, Hunnes notes, “The darker the honey, the more micronutrients and healthy chemical compounds it might have.”

So while most honey is the same, we have at least some stuff to go on here, which is what dictated our (somewhat brief) ranking down below. 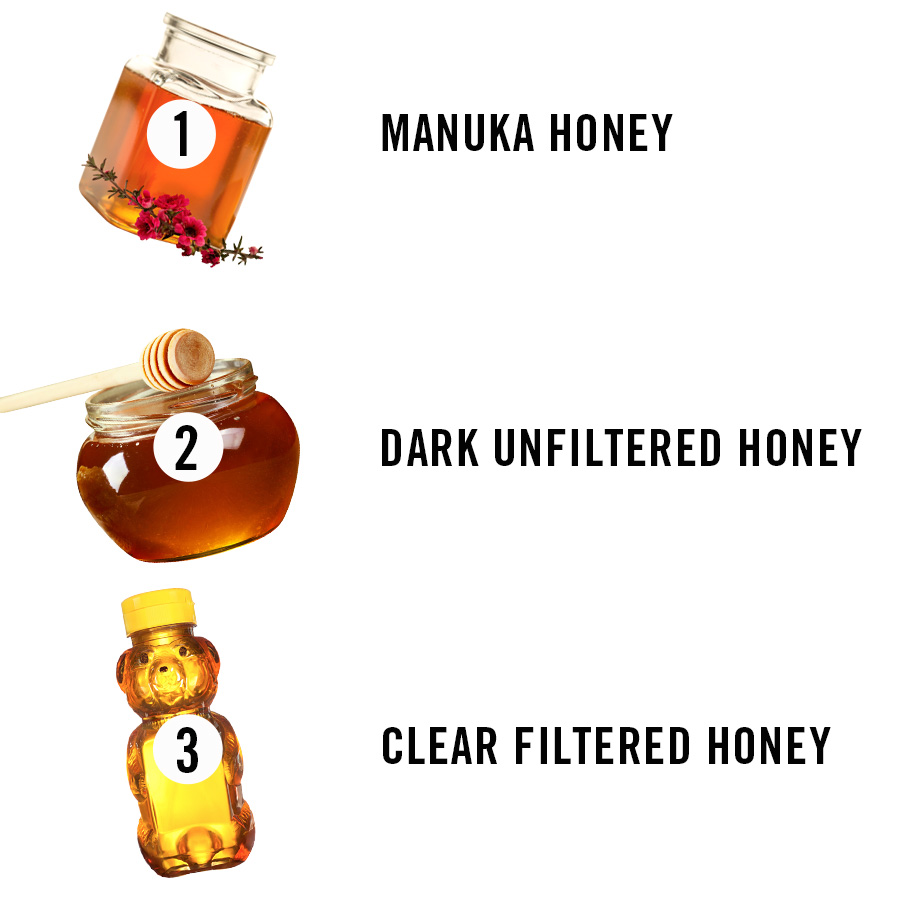 1) Manuka Honey: As Hunnes hinted at, manuka honey — which is made in Australia and New Zealand by bees that pollinate the native manuka bush — is commonly believed to be the godfather of healthy honeys. This was also confirmed to me by nutritionist David Friedman, author of Food Sanity: How to Eat in a World of Fads and Fiction, during my ranking of sugars. He told me, “Manuka honey has antiviral, antifungal, antibacterial, anti-inflammatory and antioxidant benefits. It’s an effective treatment for stomach ulcers because it kills H. pylori, a bacterium that’s been associated with causing ulcers. It’s also been found to be effective against chronic diarrhea and C. difficile, a bacterium that can cause life-threatening inflammation of the colon.”

At the time, Friedman also pointed me toward a study showing that manuka honey “attacks harmful oral bacteria associated with plaque formation and tooth decay,” suggesting that, despite honey being mostly sugar, this particular kind might actually help keep your teeth healthy.

As for why manuka honey is so great, its antibacterial properties, at least, come from a compound called methylglyoxal, which is produced in high amounts thanks to compounds in the nectar of manuka flowers. Again, though, it should be noted that methylglyoxal is found in pretty much all honeys, just usually in lesser amounts. So even though manuka honey might be a little healthier than some other variations, the differences are likely slight at most.

2) Dark, Unfiltered Honeys, Like Raw Buckwheat Honey, Alfalfa Honey, Eucalyptus Honey and Jamun Honey: Once more, as Hunnes explained earlier, honeys that are darker in color are likely to have more micronutrients, healthy compounds and antioxidants, all of which contribute to the natural antibacterial and antiviral properties of the final product. Which explains why, in our previous ranking of sugars, Friedman said, “Make sure to choose a high-quality brand of raw honey and not one that’s mixed with any syrup [like high-fructose corn syrup]. Check the ingredients, and look for the only ingredient listed as being ‘honey.’ Also, buy honey in a glass container instead of plastic, as this will ensure it’s more stable. Finally, avoid clear honey, which is an indication that it’s been filtered. Good quality honey is foggy, a natural effect of bee pollen.”

3) Clear, Filtered Honey, Like That Cheap Shit at the Grocery Store: Like both Hunnes and Friedman have already emphasized, light-colored, clear honey is a surefire sign that the healthy micronutrients have been filtered out and possibly replaced with crappy filler ingredients. “Some honey is mixed with high-fructose corn syrup, which has been linked to causing inflammation and contributes to many diseases,” Friedman said in our other ranking. In which case, that’s a nope from me.

And frankly, that’s about all there is to say about honey and nutrition. “Again, they’re primarily all based on the same riff of a theme, and their differences will be somewhat minor,” Hunnes confirms. “Honey’s still a better choice than plain old table sugar, though.”

Now quit thinking about honey and go give your other honey some attention.