Ranking Hard Liquors by How (Un)Healthy They Are

Tequila? Whiskey? Absinthe? Which is least likely to turn my innards into goo?

Warning: Hard liquor might be carb-free, but drinking too much will still expand your waistline, destroy your liver, and in entirely hypothetical cases, make you puke in the back of an Uber (I’m so, so, so sorry, sir). But that never stopped anyone from going shot-for-shot with the Shots Guy, which is where knowing which spirits are healthier than others might come in handy. As such, I asked nutritionist David Friedman, author of Food Sanity: How to Eat in a World of Fads and Fiction, to help me rank every hard liquor — from not-too-bad to “this-thing-will-fuck-you-up-big-time.”

Read More Rankings:
• Ranking Exercises by How Useful or Dangerous They Are
• Ranking Crash Diets by How Unhealthy They Are 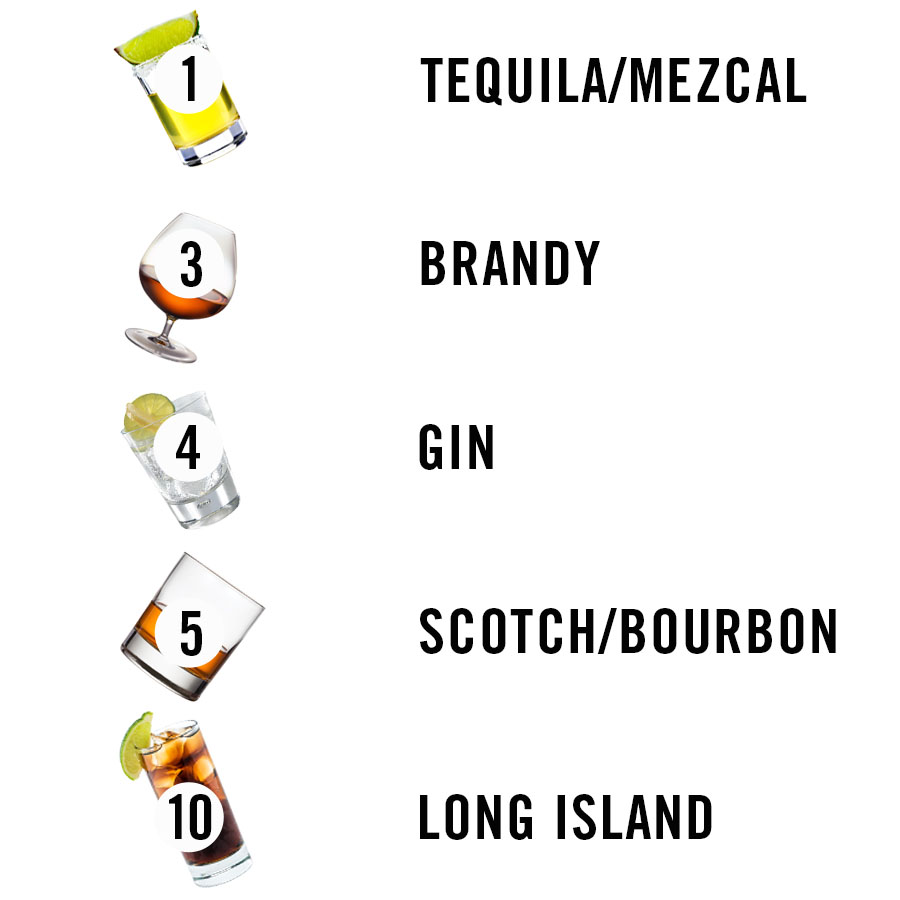 1. Tequila and Mezcal (tied): “Quality tequila (made from 100-percent agave) comes in at my top pick for the healthiest hard liquor,” Friedman says. “Unlike most other hard liquors, tequila doesn’t spike your blood sugar, which means even people with type 2 diabetes can drink it — in fact, it may even lower glucose levels and increase insulin production.” Tequila is also relatively low in calories. “One shot of tequila contains only 63 calories, compared to the 96 calories in a shot of vodka,” Friedman says.

Tequila is also one of the more gut-friendly hard liquors, according to Friedman, since it contains dietary fiber and probiotics (although both studies and experts emphasize that tequila is absolutely not a good source of probiotics). “Tequila also contains fructans, which have potent immune-boosting properties,” Friedman explains, adding that fructans have been developed into drug-carriers that help treat various colon diseases. Friedman also mentions that tequila is gluten-free, since it contains no wheat or barley.

The most surprising part? “One of the best attributes of tequila is its ability to minimize hangovers,” Friedman insists. “The primary cause of hangovers are called congeners, which are byproduct of fermentation and aging, making them more prevalent in barrel-aged spirits (such as brandy, whisky or wine). Tequila made from 100-percent blue agave, however, has fewer congeners than brown hard liquors.”

Tell that to my goddamn brain on Saturday morning.

3. Brandy: “Brandy contains vitamin C and heart-healthy antioxidants,” Friedman says. “The polyphenol compounds in brandy have beneficial effects on the endothelial lining of our blood vessels, and research shows that it can help prevent heart attacks and stroke, as well as fight obesity. Polyphenols, meanwhile, suppress the activity of a gene called NF-kappaB, which plays a role in inflammation, and brandy’s polyphenols can help ward off ailments, ranging from colds and coughs to arthritis.”

“Brandy’s antioxidants also eliminate (or neutralize) the negative effects of free radicals, which destroy healthy cells in the body,” Friedman continues. “One shot of brandy provides the same amount of antioxidants as your daily recommended vitamin C intake, which produce some anti-aging effects, including healthier skin with less wrinkles (unless you smoke a cigar with your glass of brandy).”

4. Gin: “Gin is made from juniper berries, which are chock-full of 87 distinct antioxidant compounds,” Friedman says. “These ‘super berries’ also contain compounds called flavonoids, which have anti-aging properties, heart-healthy properties and can help lower blood sugar. While other alcoholic beverages have been shown to lessen your quality of sleep, the juniper berries in gin actually have a positive impact on brain chemistry, encouraging restorative sleep.”

Friedman also says that gin provides some skin-improving benefits. “Juniper has been shown to improve the appearance of your skin, giving it a smooth and youthful look,” he explains. “Gin also contains 97 calories per shot — for comparison, the average glass of wine contains 160 calories and one pint of beer packs a whopping 208 calories. Because gin also only contains trace amounts of sugar, it’s a good option while watching your weight.”

5. Scotch and Bourbon (tied): “We hear a lot about how healthy wine is because of its high antioxidant content, but whisky contains just as many,” Friedman says. “Whisky gets its amber coloring from being aged in wooden barrels, which also creates ellagic acid, and the ellagic acid in whiskey can help keep blood sugar levels in check. Ellagic acid also has anti-cancer properties, which have been shown to help combat skin cancers, esophageal cancers and colon cancers.”

But some whiskeys are better than others. “To get the most health benefits from whisky, drink single malt — it contains more antioxidants and ellagic acid than blended whiskeys, which combine several malts with wheat and/or corn. Bourbon, for instance, is made with at least 51-percent corn, so it’s not the ideal choice. Also, 93 percent of corn planted in the U.S. is genetically modified, so look for bourbon brands that have ‘distilled using 100 percent non-GMO corn’ on the label.”

7. Vodka: Bad news, “It’s clear so it must be healthier” people: Vodka is way down at number seven. “While many people reach for a glass of wine at the end of a stressful day, research shows vodka actually relieves tension better than wine,” Friedman says. “Moderate vodka consumption [if there even is such a thing] may also help decrease the pain and inflammation associated with rheumatoid arthritis by 30 percent compared to not drinking at all.”

“Vodka is also heart-healthy and may help lower cholesterol,” Friedman continues. “Additionally, if you suffer from bad breath, try swishing a shot of vodka in your mouth each morning, since it kills the bacteria that causes bad breath — just don’t get pulled over by a cop on your way to work.” If you say so!

8. Rum: “Rum has antibacterial properties, and it’s been used to help treat strep throat,” Friedman says. “But rum is made with a fermentation process that uses sugar cane juice or molasses, so it’s not the best option if you’re watching your weight.”

Much like whiskey, some types of rum are healthier than others. “Just like red wine is healthier than white wine, the same holds true for rum: Dark rum begins as a clear liquid, but instead of being filtered immediately, it’s left in charred oak or wooden barrels to age — this brings a darker color, a bolder flavor and more healthy antioxidants,” Friedman explains. “Also, while too much drinking can damage your brain, moderate consumption of rum may actually lower that risk: Rum has properties that may help protect your brain cells and decrease your risk of dementia and Alzheimer’s.”

9. Absinthe: “Absinthe is a potent green spirit made from anise and wormwood,  among other ingredients,” Friedman explains. “Wormwood has been used for centuries to treat digestive problems, such as loss of appetite, upset stomach, gallbladder disease and intestinal spasms.”

“Absinthe earned a bad reputation thanks to thujone, an ingredient in wormwood that was widely thought to cause a whole host of side effects, including convulsions, hallucinations and psychosis,” Friedman continues (although there’s no actual scientific evidence that thujone causes hallucinations, even in high doses). “Absinthe also has the highest alcohol content on the list at 144 proof, which makes whiskey’s standard 80-proof seem like Kool-Aid in comparison. As a result, excessive absinthe drinking was once considered to be the worst type of alcoholism, a belief that led to the coining of the term absinthism. In fact, absinthe was associated with so many cases of serious toxicity that it was banned from several countries (including the U.S.) in the early 1900s. In 2007, though, the 95-year absinthe ban was finally lifted, and it’s now legal to sell in the U.S. so long as it’s thujone-free.”

10. Long Island Iced Tea: No, it’s not a spirit. It’s all the spirits! So I’m including it. Because I’m drunk. Woo! “A Long Island Iced Tea contains vodka, rum, tequila, gin, triple sec, sweet-and-sour mix and Cola,” Friedman says. “The big problem with this ‘sky’s-the-limit’ rocket-fuel beverage is that it comes at a steep caloric price — just one glass can pack on a whopping 780 calories. The high sugar content and Cola can also cause tooth decay, weight gain and a lowered immune system. Then there’s the sweet-and-sour mix, which contains high fructose corn syrup, which has been linked to ADHD, obesity, diabetes, heart disease and cancer.”

“Long Island Iced Teas have a sweet ‘tea-like’ flavor that’s known for going down easy; however, they can come back up just as easy, so make sure to have a pillow on standby for your knees during the inevitable prayer-and-puke time at the porcelain king,” Friedman says.

On a final note, I once again want to emphasize that consuming any alcohol in excess is bad for you, whatever other small bonuses your drink of choice may offer. And remember: If you think ditching hard liquor for beer will help you drink less, you’re sadly mistaken.

Now please excuse me while I sip a very small, healthy tequila.