Panda Express? McDonald’s? Taco Bell? Whose healthy item is kinda good for you, and whose is a steaming pile of artery-clogging horseshit?

Two years ago, the MEL editorial staff taste-tested the Taco Bell “healthy” menu. Some of us can still taste it. My colleague C. Brian Smith, who wrote about the feast, came to two conclusions. First, he discovered that fast food can never really be healthy, no matter what their marketing might say:

“‘While it’s true that most fast food is high in calories and fat, fast food with reduced calories and fat shouldn’t automatically receive a health halo,’ says David Wiss, a registered dietitian nutritionist with Nutrition in Recovery in L.A. He cautions that the many questionable ingredients that go into these foods — flavor compounds, emulsifiers, stabilizers, binders and preservatives — are often overlooked.”

Second, Smith emphasized our shared displeasure with the meal in general:

“In fact, boring is the consensus for the entire meal: Everything strikes us as a sadder, beige-y version of the real thing. We’ve eaten crap but didn’t enjoy it, and what’s the point of that? Overall, the reaction is what you might expect from people who were served O’Doul’s at happy hour.”

All of which is to say that I’m reliving that extremely disappointing meal as I ask Dana Hunnes, senior dietitian at the Ronald Reagan UCLA Medical Center, to help me rank fast food “healthy” items — from potentially healthy to “your definition of healthy is fucked.” 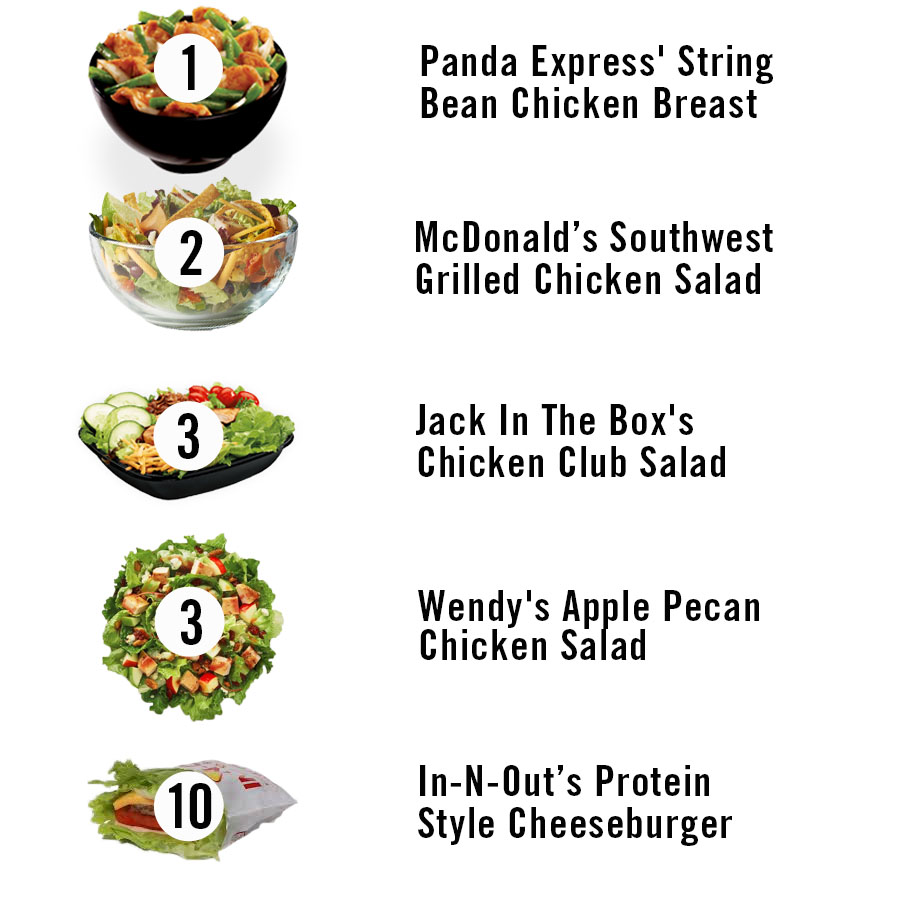 1) Panda Express’ String Bean Chicken Breast: Hunnes says that this is the healthiest item on our list, since it contains only 190 calories and 580 milligrams of sodium. Better yet, as nutritionist David Friedman, author of Food Sanity: How to Eat in a World of Fads and Fiction, explained during our previous ranking of vegetables, string beans (aka, green beans) are seriously healthy:

“‘Green beans contain antioxidants similar to those found in green tea, also known as catechins, which can improve heart health and help prevent cancer,’ Friedman explains. ‘Green beans also help to reduce the risk of heart disease due to their high levels of polyphenolic antioxidants, which are flavonoids that have anti-inflammatory properties. Test subjects with high flavonoid levels have shown anti-thrombotic results, meaning they prevent blood clots. They’ve also been shown to reduce the risk of birth defects for pregnant women. Finally, green beans provide calcium, a vital mineral that helps protect the bones from deterioration and osteoporosis.’”

However, the healthiness of this item relies on you sticking to one portion and avoiding an extra order of chow mein. “Now, if you order three portions of String Bean Chicken Breast to fill you up, that won’t be good for you,” Hunnes emphasizes.

2) McDonald’s Southwest Grilled Chicken Salad: “This one looks pretty healthy, and it contains a nice dose of fiber and lean protein,” Hunnes says. (It specifically contains six grams of fiber and 37 grams of protein.) “It looks like they use real chicken, too. My only issue is that it’s really high in sodium — it contains 1,070 milligrams of sodium and only has 350 calories. That’s ridiculously high for a salad.”

The American Heart Association recommends consuming no more than 2,300 milligrams of sodium per day, and in an ideal world, they say that most adults should have no more than 1,500 milligrams per day. That’s because too much sodium has been linked to high blood pressure, as well as increased risk for heart disease and kidney disease.

Despite having a shockingly long ingredients list, the fact that the Wendy’s salad contains pecans is a plus, as we learned in our previous ranking of nuts:

“‘Pecans have many vitamins, minerals and antioxidants,’ Friedman explains. ‘They also contain monounsaturated fats, which may help improve cholesterol levels, and they provide more flavonoids than any of the nuts — flavonoids are among the most anti-inflammatory of all antioxidants, helping to combat cardiovascular disease and the negative effects of aging.’”

Apples are also a healthy addition. So all in all, these salads aren’t a terrible choice, apart from all that salt.

5) Burger King’s Chicken Garden Salad: “Again, overall, I’d say that this is a fairly healthy choice,” Hunnes says, adding that it contains seven grams of fiber and a whopping 40 grams of protein. “Although, I’m not quite sure where the 500-plus calories or the 1,210 milligrams of sodium — which again, is ridiculously high for a salad — are coming from.” In fairness, the same holds for all the other salads, too — that is, Hunnes nor I have any clue which ingredient/component (the meat? the dressing? the lettuce?) is packing all that salt.

6) Taco Bell’s Power Menu Bowl: “This is also on the ‘healthier’ side — for Taco Bell, at least — but again, it contains 1,200-plus milligrams of sodium, and getting 60 percent of your daily sodium intake from one meal is a little terrifying,” Hunnes says. “This is still probably better than one of their burritos, though.”

That said, the ingredients list for this bowl is frighteningly long and contains several potentially harmful preservatives, including calcium disodium EDTA (which might cause essential mineral depletion), and numerous MSG-like flavor enhancers, including disodium guanylate and inosinate (which can induce headaches and nausea).

7) Del Taco’s Pollo Asado with Avocado: Unlike the Taco Bell bowl, the ingredients in this bowl are refreshingly simple, including easy-to-understand ingredients like seasoned black beans, grilled chicken and diced tomatoes. However, once again, Hunnes has major problems with how much sodium this dish contains. “This has almost 600 calories and nearly 1,400 milligrams of sodium — that’s 70 percent of your daily recommended sodium intake in one salad-type meal,” she emphasizes. Shit.

8) El Pollo Loco’s Original Pollo Bowl: This bowl is really similar to the Del Taco bowl, but it takes that sodium overload to a whole other level. “The calories are fine at 530 per serving, but this contains 1,680 milligrams of sodium, which is beyond ridiculous,” Hunnes says. “For some people, that’s 100 percent of their daily sodium intake, and for others, it’s 85 percent.”

9) Carl’s Jr. Beyond Famous Star w/ Cheese: Once again, Hunnes points to the fact that this (Beyond) burger contains 700 calories and a whopping 1,550 milligrams of sodium. “I do like that it’s a vegan burger, though,” she adds. “But I wish it were on a whole-grain bun — that would be much better for you.”

She’s right: As Friedman explained during our recent ranking of sandwiches, white flour — which is used to make white bread — is the absolute worst, since the bleaching process that it undergoes strips away all of the nutrients. “Consuming white bread can cause a spike in blood sugar, weight gain and inflammation,” he told me.

As for why whole-grain would be better, Friedman explained, “It’s loaded with fiber, healthy plant-based protein, vitamins, minerals and a variety of phytochemicals that help to improve digestion, reduce inflammation and lower cholesterol. Whole-grain bread also contains lactic acid, which promotes the growth of ‘good bacteria’ in the intestines.”

10) In-N-Out’s Protein Style Cheeseburger: Protein style (which replaces the bun with lettuce) might seem like a healthy option, but Hunnes focuses in on the cheese, which she says contains tumor promoting casein (animal protein), and the red meat, which is a known carcinogen according to the World Health Organization. “I’d definitely stay away from this,” Hunnes says, as I cry about the fact that my go-to fast-food burger joint got wrecked by this ranking.

All in all, as you probably guessed, very few of these items are truly healthy — if they don’t contain enough sodium to make you turn into a raisin, they have an ingredients list that’s longer than the dictionary. Besides, if you’re going to a fast-food joint, are you really going to order a dry-ass salad?