Ranking Every Type of Sushi by How Healthy It Is

Unagi? Hamachi? California rolls? Which provide the most of those sweet, sweet omega-3s?

I frequently convince myself, while stubbornly exploring the limitations of my wasabi tolerance, that sushi is indeed a healthy meal. At the very least, compared to other meats, fish contains more heart-healthy omega-3 fatty acids and less artery-clogging saturated fat. Right?

But still, some types of sushi are significantly healthier than others, which is why I asked Dana Hunnes, senior dietitian at the Ronald Reagan UCLA Medical Center, to help me rank several popular sushi-grade fish — from superfood to super-full-of-plastic.

But before establishing this ranking, let’s quickly talk about the five most common styles of sushi (in the U.S., at least):

Nutritionally speaking, Hunnes says that these different types of sushi are, more or less, the same. “Rolls are fine, but I recommend sticking to no more than two or three in one meal, since the calories and carbohydrates can add up,” she explains. “Sashimi is okay if you’re on a low-carb fix, but frankly, I don’t recommend low-carb, because our bodies have evolved to prefer carbs for energy. Nigiri is also fine, but you miss out on the yummy seaweed and still consume a decent amount of carbs.”

The common sushi condiments, meanwhile, provide their own set of nutritional benefits. “Ginger is an anti-inflammatory and has been used for eons as a digestive,” Hunnes explains. “Wasabi is akin to horseradish, and gives your nostrils a real clearing — while quite healthy and possibly an anti-inflammatory, the spice might upset your GI tract if you eat too much.”

But while ginger and wasabi are healthy, Hunnes warns that soy sauce is high in sodium, which can contribute to an increased risk of high blood pressure. “I don’t recommend it, and frankly, I feel like it hides the flavor of the fish,” she says. “If you’re going to eat fish, eat the fish — don’t hide the flavor with salty soy sauce.” 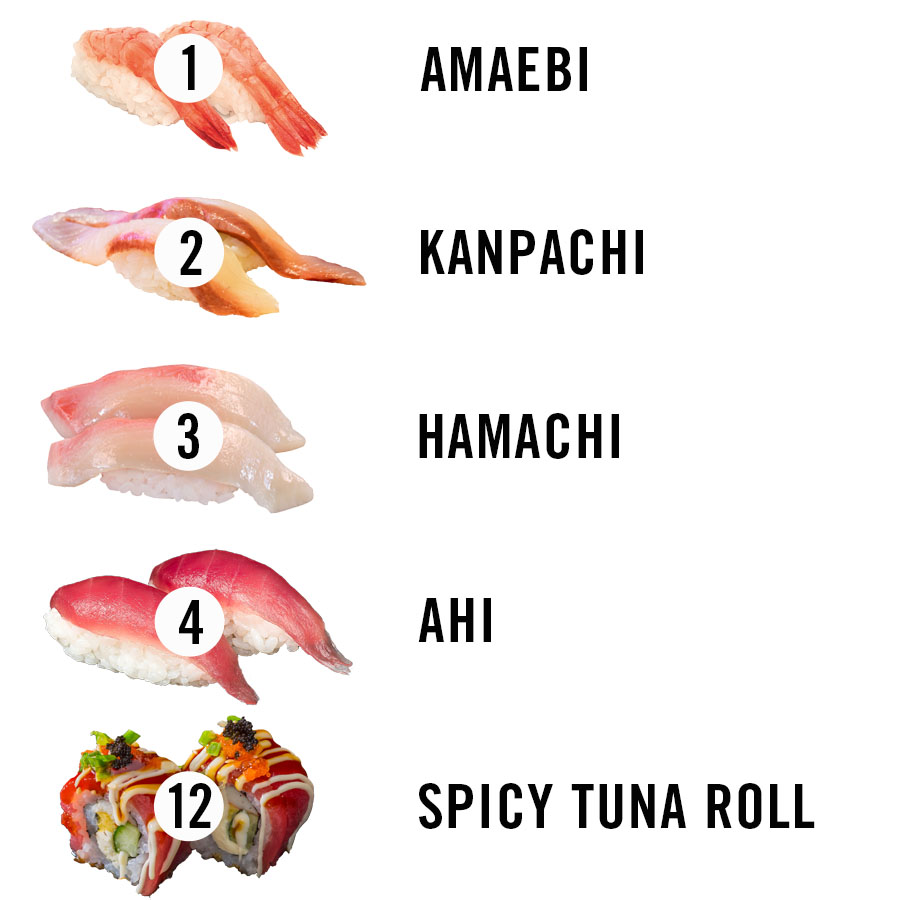 Armed with that information, let’s rank some sushi…

1) Amaebi (aka, the bullshit shrimp one that always turns up in your combo platter): Cold-water shrimp with a sweet taste, amaebi tend to be relatively low in healthy omega-3 fatty acids, but Hunnes explains that they also tend to be low in dangerous microplastics that have polluted our oceans. “These are frequently farm-raised nowadays, and since they’re low on the food chain, they also pose a relatively low health risk,” she explains. On another positive note, amaebi is a good source of phosphorus (which supports our bones and teeth) and vitamin B12 (which reduces the risk of cardiovascular disease). Amaebi is also extremely low in saturated fat. It is still, in this writer’s opinion, bullshit, and only one step above the gross one with the egg. Next!

2) Kanpachi (Amberjack): “Amberjack tend to be younger, more juvenile yellowtail — they can sometimes be more tender, but also less flavorful,” Hunnes explains. “But since they’re younger, amberjack also usually haven’t accumulated as many harmful substances (mercury or plastic residue) as older, bigger fish. They also don’t have quite as many omega-3 fatty acids as some of the other species on this list.” On the plus side, amberjack is a solid source of vitamin A (which supports our vision) and vitamin D (which promotes bone health).

3) Hamachi (Yellowtail): “These are bigger than amberjack, because they’re older — though, they’re typically a similar (or the same) species,” Hunnes explains. “Older means that they’ve had more time to acquire both harmful substances and more omega-3 fatty acids [yellowtail is actually one of the best sources of omega-3 fatty acids on this list], so it’s difficult to truly say which is better or worse.” But since marine pollution is only getting worse, yellowtail goes beneath amberjack on this list.

4) Ahi (Tuna): Hunnes explains that ahi tends to be less fatty than some other types of tuna; however, “Because they can be somewhat long-lived, they also tend to accumulate some of those more harmful substances that I previously mentioned.” Also, their low fat content also means that they don’t contain many omega-3 fatty acids. That said, ahi boasts quite a bit of magnesium (which helps the body produce energy).

5) Unagi (Freshwater Eel): “Sustainability wise, these are dubious at best,” Hunnes warns. “They tend to be fatty with good amounts of omega-3 fatty acids; however, since some are farm-raised nowadays, their healthfulness (or lack thereof), is primarily based on their feed — it’s hard to judge, because feeds can differ depending on the farming company.”

6) Hotate (Scallop): “This is a bottom (filter) feeder, so if you’re up for eating an organism that filters hundreds of gallons of water — filled with who knows what — each day, then go ahead,” Hunnes says. “Scallops also aren’t particularly high in omega-3 fatty acids.” Scallops are, however, a good source of  vitamin B12, magnesium and potassium (which supports our muscles).

7) Hirame (Halibut): “Halibut are a long-lived fish, taking many years to begin spawning, which can put them at high risk for overfishing,” Hunnes says. “Their long lives also increase their risk of accumulating some of the more harmful chemicals floating around the sea. They’re also not particularly high in omega-3 fatty acids.” These fish are significantly low in fat, though, and they contain high levels of vitamin B6 (which aids with brain development), vitamin B12 and vitamin D.

8) Sake (Salmon): Sake its loaded with omega-3 fatty acids, B vitamins and essential minerals, but it also contains more unhealthy saturated fat than many of the fish listed above. The biggest issue with this salmon, though, is that it’s massively overfarmed. “When farmed, salmon isn’t safe to eat more than once a month and often harbors sea lice, which can infect wild populations,” Hunnes says, adding that, while wild-caught salmon is a healthier alternative, “they’re in major decline in the Pacific Northwest.”

9) Uni (Sea Urchin): Hunnes says that these are primarily fat with “some protein.” She also explains that uni is actually sea urchin gonads. Yum!

10) Toro (Bluefin Tuna): “This is like eating a cheetah — not only are bluefin tuna the fastest fish in the ocean, but in the Pacific Ocean, they’re also the most endangered,” Hunnes explains. “They’re long-lived fish predators that accumulate a lot of the harmful substances, and they’re somewhat low in omega-3 fatty acids, since they’re so muscular.”

11) California Roll: We can’t rank sushi without including every sushi-hater’s go-to order. “California rolls are made with imitation crab meat, or a finely pulverized white fish, which is usually salted, sweetened and dyed,” Hunnes explains. “They don’t contain many omega-3 fatty acids.”

12) Spicy Tuna Tempura Roll: Speaking of which, here’s a tempura roll for good measure. “Tuna is so-so on the health scale, but frying the roll makes it not healthy,” Hunnes says. Bet you couldn’t have guessed that!!!

The upshot here is, I feel like crap, partly because my body is full of plastic, but mostly because my insatiable, kraken-like desire for sushi is ruining the ocean. It’s true: Our collective sushi habits are certainly contributing to the deteriorating health of the oceans. “The United Nations comes out with The State of World Fisheries and Aquaculture every two years, and the 2016 version basically shows that we overfished more than one-third of all fisheries — another 55 percent were maxed out, meaning we would be overfishing those, too, if we removed any more fish,” Hunnes explains. “A mere nine percent of fisheries are underfished.”

More than anything, similar to our previous fish ranking, this list should also emphasize the importance of understanding both where and how your seafood is caught (sushi-grade or not), which can dramatically impact the health and sustainability of that meal. To keep track of that kinda stuff, we recommend checking out SeafoodWatch.org.

We hope this list also emphasizes that shrimp nigiri is bullshit.