Ranking Deep-Fried Foods by How (Freakishly) Unhealthy They Are

This was an awful idea

Conventional — and nutritional — wisdom holds that deep-fried foods sit atop the hierarchy of unhealthy eats. In fact, I recently wrote about a new scientific study that corroborated this belief: “New research found that eating at least one serving of fried food each day increases your chances of dying an early death from cardiovascular disease by eight percent.”

One surprising finding from this study, as I reported, was that the killer consequences of consuming deep-fried foods on a regular basis were even further exacerbated when meat was involved: “Even more obnoxiously, the study also found that fried snacks like French fries, crackers and tortilla chips are less harmful than fried meats — even fish and chicken — which means I’ll go ahead and supersize that order of fries, thank you so very much.”

Why deep-fried snacks are healthier than deep-fried meats remains uncertain, but the researchers theorized that it might simply have to do with people generally consuming larger portions of meat. They also mentioned that restaurants are more likely to reuse oils when frying meats, as opposed to snacks, which could increase the number of unhealthy contaminants (and calories) in those dishes — plus, meats are usually more deeply fried than snack foods.

Unfortunately, this notion that deep-fried eats are more like little biohazards than actual food was even further substantiated when I asked Dana Hunnes, senior dietitian at the Ronald Reagan UCLA Medical Center, to help me rank a collection of some the fried foodstuffs you might find at a state fair — like corn dogs, deep-fried Mars bars, and of course, straight-up deep-fried butter. “As far as I’m concerned, very few of these products have any sort of redeeming quality,” she emphasizes. “For the most part, they’re deep-fried, processed foods with numerous additives in them.” My other go-to source for these rankings, David Friedman, author of Food Sanity: How to Eat in a World of Fads and Fiction, adds, “Even though my last name is Friedman, I’m going to have to pass on this one.”

But why — God, please tell me why — are deep-fried things so freakishly unhealthy? The answer is unfortunately quite simple: Deep-fried foods are typically much higher in calories and trans fats than their un-fried brethren. That’s because (1) deep-fried foods are usually coated in flour — i.e., more calories; and (2) they absorb extra fats and calories from the oils they’re fried in.

As I briefly mentioned earlier, frying foods at high temperatures also produces trans fats, which are the unhealthiest fats out there — something that I explained in detail while writing a previous article: “Industrially-produced trans fats are produced when hydrogen is added to vegetable oils [hydrogenation also occurs when oils are heated to high temperatures during cooking], making them more solid (like in the creation of margarine or shortening), thus increasing the food’s shelf life. Unfortunately, these artificial trans fats raise cholesterol, harden arteries and inhibit the formation of an enzyme called cyclooxygenase, which helps determine the dilation of your arteries and regulates blood flow.”

All in all, the World Health Organization estimates that a diet high in trans fats can increase your risk of heart disease by 21 percent and premature death by 28 percent. Furthermore, when you add on that eight percent increased chance of death from the study mentioned up top, you can really see how deep-fried foods earned their hazardous status.

But all of this considered, Hunnes was a good sport and at least attempted to rank the deep-fried foods that I sent her way. Here’s what she came up with… 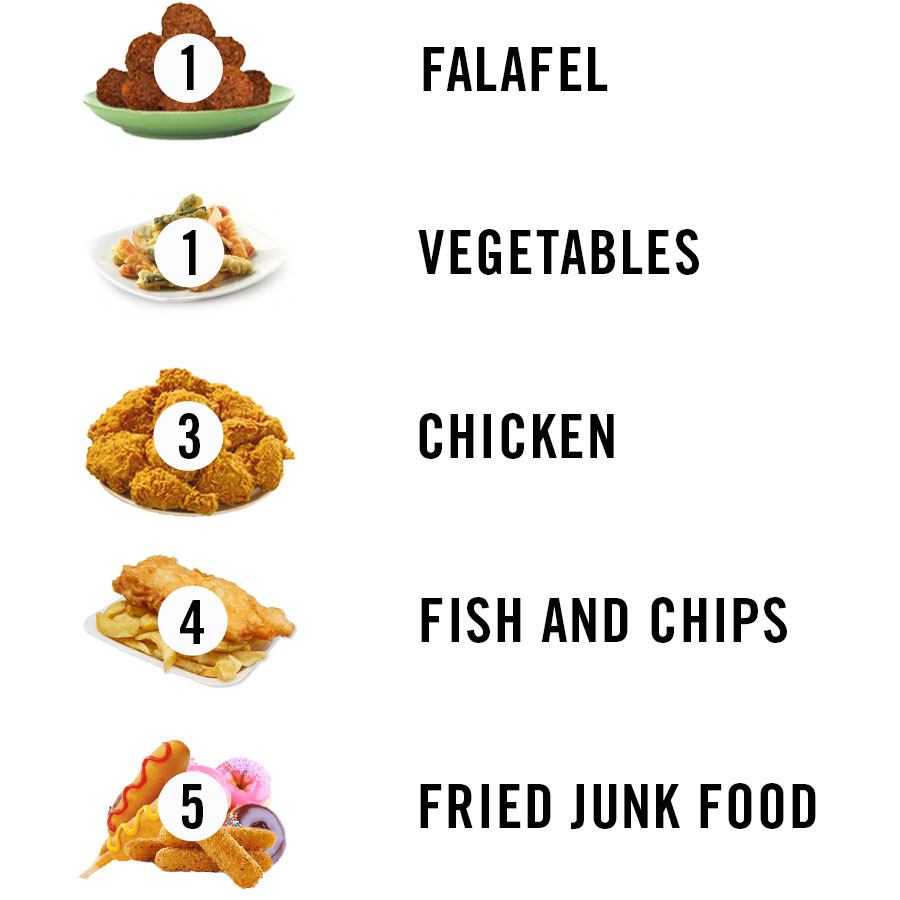 1) Falafel and Fried Vegetables (tied): “Falafel is a deep-fried chickpea dish,” Hunnes explains. “It has fresh herbs, chickpeas (which provide fiber) and it’s lower in sodium than the other items on this list. Therefore, it does, in fact, have a few redeeming qualities.”

Meanwhile, Hunnes mentions that fried vegetables are (more or less) the same. “You’re at least getting nutrients and fiber,” she says. But remember: When I asked Friedman about Blooming Onions during our recent ranking of vegetables, he explained that deep frying can make even the healthiest vegetables unhealthy. “If you dip onions into a flour-based batter and fry them in greasy, fattening oil to make Blooming Onions, the bad outweighs the good and onions fall to the bottom of this ranking list,” he told me.

Overall, though, that’s not so bad! Maybe this ranking won’t terrible after all.

3) Fried Chicken: “If we’re talking about a deep-fried piece of real chicken [rather than fast-food chicken, which as you can imagine, is terrible for you], then I suppose it’s at least a recognizable food and a source of protein,” Hunnes says. Okay… that’s not the best news, but I can live with it.

4) Fish and Chips: “I suppose you could argue that, at the very least, the fish in fish and chips has one redeeming quality — it’s a lean source of protein,” Hunnes explains. I admit, at this point, things seem to be spiraling out of control quickly.

5) Mozzarella Sticks, Corn Dogs, Doughnuts, Deep-Fried Butter, Deep-Fried Mars Bars, Deep-Fried Twinkies, Deep-Fried Ice Cream and Basically Every Other Deep-Fried Junk Food You Can Think Of (Tied): “I really truly have nothing good to say about these — they’re all white flour, sugar and high sources of calories,” says Hunnes. “Also, I’m sorry, but who eats fried butter? That’s just a heart attack waiting to happen, and I can’t even imagine that tastes good. Also, corn dogs are processed meats, a likely carcinogen according to the World Health Organization.”

In that case, sounds like I have some serious soul searching to do: Death or deep-fried ice cream?