Ranking Cauliflower-Based Carb Substitutes by How Healthy They Are

If you have a passion for carbohydrates, you surely noticed when, over the past couple of years, companies began replacing some of your favorite foods with versions that are made from cauliflower, and they better leave my French fries alone, or I will unleash my fury upon them like the crushing of a thousand waves.

Anyhow, as more Americans embraced gluten-free, low-carb and plant-based diets, food companies started messing with cauliflower and its gentle taste to deliver allegedly healthier alternatives to simple carbs like rice, noodles and breads. But whenever anyone does anything for the sake of making money, we need to ask questions, and today, I want to know if cauliflower substitutes are actually as healthy as they purport to be. I asked Dana Hunnes, senior dietitian at the Ronald Reagan UCLA Medical Center, to help me rank an assortment of cauliflower alternatives by how healthy they are — from much, much healthier than the original product to “might as well have just had regular tater tots.”

Before diving into the ranking, it’s important to stress that while it might be easy to believe that a cauliflower substitute is automatically healthier than the carb-laden alternative, you should never assume that. “Blanket substitutions aren’t necessarily going to be better, especially if cauliflower is a buried ingredient,” Hunnes warns. “If there are multiple other ingredients higher up on the ingredients list, that can make the item not much better than the original version.” As such, she suggests “comparing and contrasting these items with their original cousins, and seeing which has fewer calories, less sodium, fewer carbohydrates, more fiber and so on.”

As far as our ranking goes, while Hunnes again emphasizes the importance of simply looking at the ingredients list and nutrient content of your products in order to make the right choice, we were still able to come up with a general list. 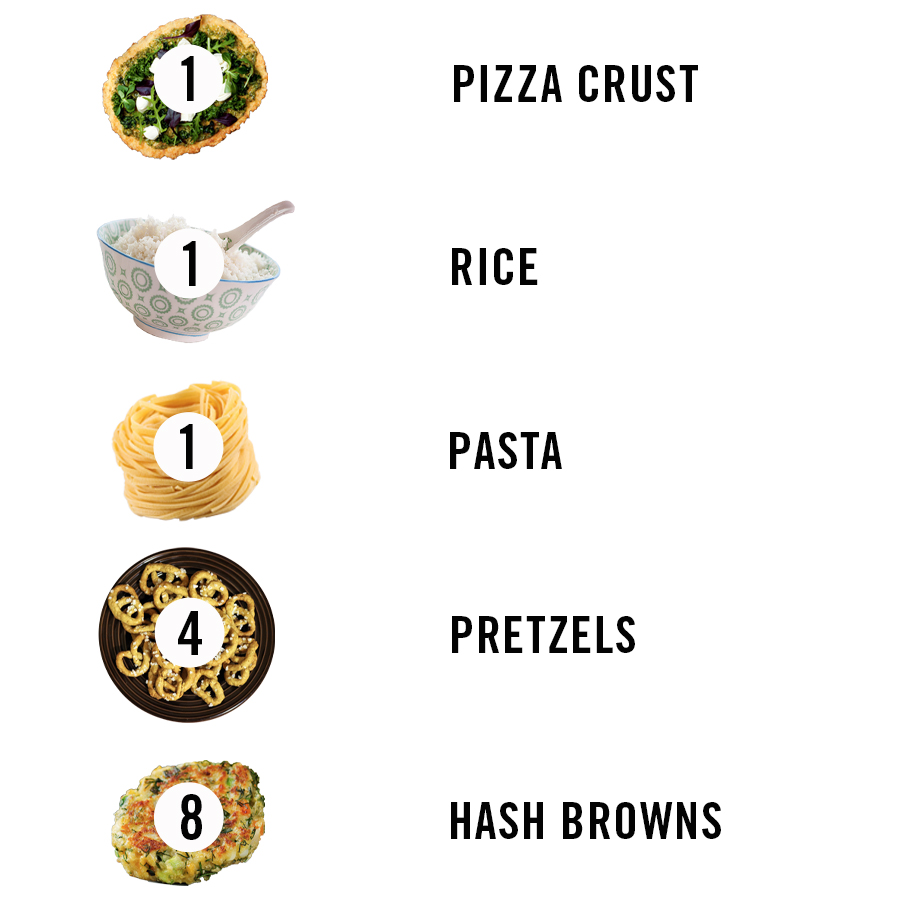 1) Cauliflower Pizza Crust, Pasta and Rice (tied): In most cases, a cauliflower version of these extremely basic carbs are going to be better than the standard versions, which are often made from white flour, an ingredient that has almost no nutritional value. “The cauliflower version will add nutrients and fiber that might not otherwise be there,” Hunnes confirms. You can see, for example, that these cauliflower spaghetti noodles deliver a decent amount of iron (which helps with energy production), potassium (which regulates our internal fluids), fiber and even protein, whereas even a wheat pasta, one reinforced with vitamins and minerals, contains barely half of those amounts across the board.

That said, if you were originally going to have, say, a side of wild rice, which is packed with nutrients, replacing that with cauliflower is kind of unnecessary. These substitutes are best served when replacing the least nutritious versions of whatever they might be emulating, like white rice. And again, make sure that cauliflower is up high on the ingredients list before buying into the product.

4) Cauliflower Buns, Crackers, Pretzels and Chips (tied): These all fall into the bread and snack substitute category, and the same thing I said above applies here, too: To get the most out of your cauliflower substitutes, make sure the cauliflower is up high on the ingredients list and remember that, for instance, replacing Doritos with cauliflower chips provides a much more significant impact than replacing carrot chips with cauliflower chips. Still, you can see, for example, that these cauliflower sandwich thins contain fewer calories, carbs and much less sodium than plain old white bread, which also happens to deliver loads of sugar and a ton of harmful preservatives.

Again, though, make sure to scrutinize those labels! These cauliflower crackers and pretzels still boast a decent amount of sodium, for example, and while they might tend to be better than, say, Cheez-Its, assuming that these products are as healthy as an actual cauliflower could encourage you to go overboard and do more damage than you might have without them.

8) Cauliflower Hash Browns, Fries and Tots: While nothing good can be said about the health benefits of fried white potatoes, perhaps because these products tend to be notoriously unhealthy in their original states, manufactures of the cauliflower versions can be more carefree about adding extra ingredients. “The hash browns still have a high amount of sodium, and same with the fries,” Hunnes notes (I told you not to fuck with my fries). “The carbohydrate content may be a bit lower, but the calories aren’t that much different. The tots, meanwhile, certainly have a lot of extra ingredients in them, additives that may not make them any better than the original version.” Indeed, while making your own hash browns from white potatoes might not be highly nutritious, at least you can avoid unnecessary ingredients like sodium acid pyrophosphate, which studies have linked with a weakened immune system and osteoporosis when consumed in large amounts.

But again, if the choice is between a large order of McDonald’s fries and a pack of frozen cauliflower fries, the latter is still probably a better choice. Also, again — and yeah, it needs to be said a million times — look at those labels, folks. “In some instances, the original would be better for us,” Hunnes says, adding that this can be especially true when replacing a single-ingredient food (like a potato) with a cauliflower substitute packed with additives (like some frozen cauliflower fries). “That’s really the only way to reliably look at what’s better for you.”