Ranking Butter Alternatives by How Healthy They Are

Ghee? PAM? Margarine? Which can I put on everything and still have a working heart?

Since the low-fat craze of the 1980s, butter has been perceived as a gluttonous delight, the enemy of slender waistlines and chiseled abdominals. This is a largely misleading and unfortunate impression, though: In reality, butter is actually something of a health food, boasting a decent amount of important nutrients and conjugated linoleic acid, a type of fat that has anti-cancer properties, aids in weight management, supports immune function and reduces inflammation. It also contains a nice dose of a fatty acid called butyrate, which supports the intestines and could help treat stomach ailments like irritable bowel syndrome and Crohn’s disease. Finally, while butter is high in saturated fat, hence it being targeted by the low-fat movement, recent research seems to debunk the notion that these fats contribute to the development of heart disease.

To that end, some research even suggests that eating moderate amounts of dairy foods, including butter, could reduce the risk of heart attack and stroke. Others found that a higher intake of high-fat dairy foods, like butter, reduce the risk of obesity. That said, there are also studies that point to other fats, like olive oil, as better options for keeping the heart healthy.

Now, none of this is to say you should go out and pound eight sticks of butter, like this dude on YouTube:

Instead, just know that eating butter in moderation — about one or two tablespoons a day — alongside a variety of other healthy fats, like certain cooking oils and fish, could actually do more good for your health than bad.

Still, there are an assortment of butter alternatives on the market these days, many of which promise to be a healthier choice. So I asked clinical nutritionist Tara Coleman to help me rank a bunch of butter substitutes by how healthy they are — from better than butter to a whole lot of nope. As for where butter itself might land in this ranking, that kind of depends. “If you’re looking at just the numbers, butter is a little better than ghee, as it’s slightly lower in calories and saturated fat,” Coleman explains. “However, ghee has a higher smoke point (which can be better for cooking), and the milk proteins are removed, so it’s better if you’re lactose intolerant. It’s also important to remember that there are a lot of different types of butter, and they’ll each have different nutrient profiles. Perhaps the biggest difference is the difference between grass-fed and grain-fed butters: Grass-fed butters have higher levels of vitamins and antioxidants, as well as healthy fats, like omega-3 fatty acids and conjugated linoleic acid. Of course, at the end of the day, it’s still something that you should use in moderation.” 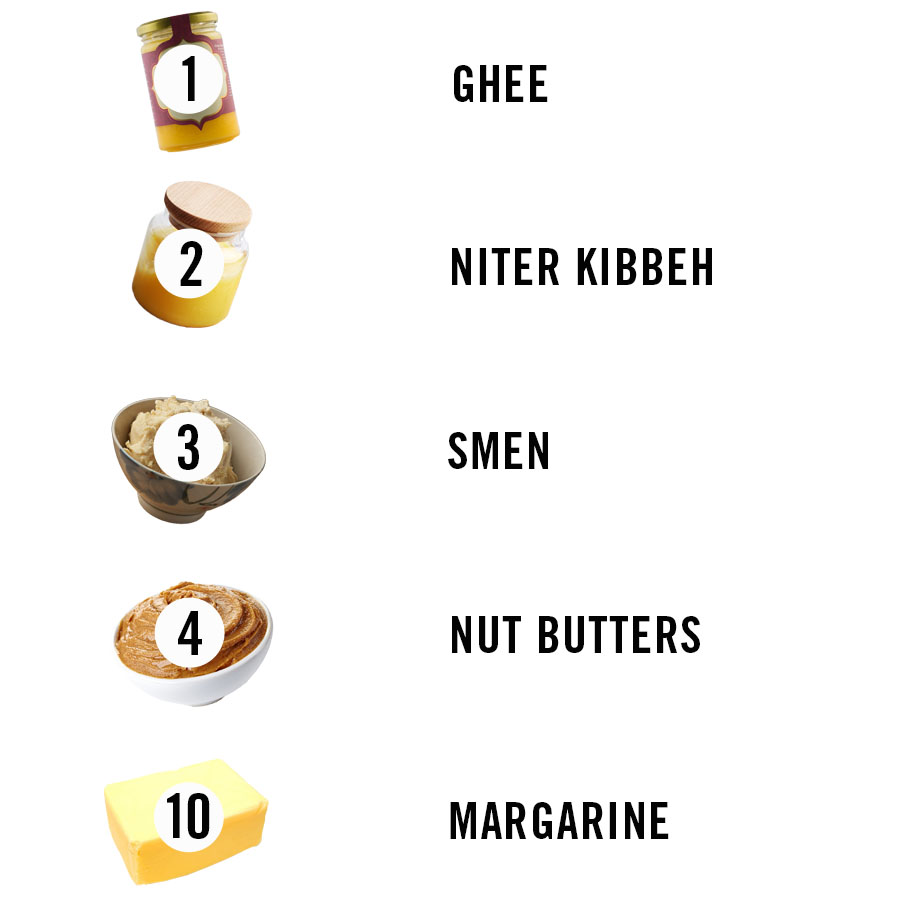 1) Ghee: “Ghee is a type of clarified butter that’s popular in Indian cuisine,” Coleman explains. “One of the things that makes ghee unique is that it’s heated at a very low temperature, which allows it to maintain nutrients, like vitamin A and E.” Vitamin A supports skin health, immune function and healthy vision, while vitamin E backs the heart and acts as an antioxidant, protecting cells from disease-causing free radicals.

Another benefit of ghee is that the potentially unhealthy and disagreeable milk solids are strained out during the lengthy cooking process. “It also filters out the lactose and casein, so people who traditionally struggle with those milk proteins can typically tolerate ghee,” says Coleman. “Finally, it has a higher smoke point than butter, which can make it healthier for cooking.” That’s because cooking fats and oils past their smoke point can release an assortment of toxic chemicals, so generally, those with a higher smoke point are safer to cook with.

Overall, ghee can be used in place of butter on just about everything, from spreading it on toast to sauteing vegetables with it.

2) Niter Kibbeh: You probably have to stop into your local health food store to find this stuff, since it’s more commonly found in Ethopian cuisine. “Niter Kibbeh is similar to ghee in that it’s clarified butter,” Coleman says, meaning it has many of the same benefits. “However, it’s traditionally made with Ethiopian spices, giving it a very unique flavor. The combination of the clarified butter and spices makes it an easy way to add both texture and flavor to simpler dishes. For those willing to experiment, it’s also fairly easy to make at home by heating butter, skimming off the residue and simmering with spices.”

3) Smen: Another funky butter alternative, smen is most often used in the Middle East and North Africa, but again, you might be able to find it if you look around the right places. “Smen is a fermented butter made from goat, sheep or cow’s milk,” explains Coleman. Health-wise, it again is similar to ghee and niter kibbeh, and the fermentation process could possibly add some gut-healthy probiotics to the mix. “Due to the fermentation, it has more of a stinky blue cheese flavor than the butter we’re used to, so you may not be able to use it interchangeably.” But you can spread it on some toast and give that a go.

4) Nut Butters: Unless you’re something of an expert in the kitchen, you probably don’t want to cook with nut butters, since that can be kinda tricky. But chances are, you occasionally spread them on some toast or whatever else you have laying around in the pantry. “If you’re looking simply at nutrient profile, nut butters may surpass the traditional cow butter that we know and love,” Coleman says. “They contain protein, fiber and healthy fats, as well as magnesium, folic acid and potassium.” Magnesium maintains energy levels, folic acid helps prevent cancer and potassium does good things for our muscles.

So why, then, are nut butters lower on our list? Well, because the potential for disaster is high. “Two words of caution,” Coleman emphasizes. “When you’re looking at the ingredients, a nut butter really only needs nuts and salt. If you see a laundry list of ingredients, it’s best to find another options. Second, nut butters tend to be really tasty, so it’s easy to overdo it. For instance, we don’t typically stand over the kitchen counter with a jar of butter and a spoon.”

*puts spoon down and slowly steps away from the butter*

5) Coconut Butter: “The difference between coconut butter and coconut oil is that it’s made from the meat of the coconut,” Coleman says. “This means that it has the health benefits associated with coconut oil, but also maintains some fiber. This includes lauric acid (a bacteria and virus fighter), magnesium and amino acids. It has a light and sweet flavor that’s tasty enough to stand alone, similar to the nut butters. It tastes great in curries and stir-fries, and the sweet flavor really brings out the flavor of roasted vegetables in the winter months.”

6) Lard: “This one might surprise you,” says Coleman (I am indeed surprised). “Traditional lard is made from pork fat. It has less than a third of the saturated fat and over two times the monounsaturated fats of butter.” Monounsaturated fats are particularly healthy, for several reasons: They help us lose weight, keep our heart healthy, reduce our chances of developing cancer and so on.

Coleman explains that lard can also contain omega-3 fatty acids, which prevent heart disease, depending on how the pig was cared for. “Plus, it has a ton of flavor,” she adds. There is a caveat, though: “Unfortunately, the majority of the lard found at the grocery store — or in your favorite refried beans — are hydrogenated and something you want to steer clear of,” Coleman says. Hydrogenation can result in trans fats, and trans fats raise cholesterol, harden arteries and inhibit the formation of an enzyme called cyclooxygenase, which helps determine the dilation of your arteries and regulates blood flow.

Now, since Big Lard often employs hydrogenation, a process seldom listed on food labels, the best places to find quality lard are at butcher shops and local farmers markets, where it comes untampered, directly from the pig. Still, even with the good stuff, lard should be used in moderation, as it can indeed be deeply unhealthy in large amounts.

7) Vegan Butter: “Vegan butter can be a great plant-based alternative to traditional butters, however, it really depends on the ingredients,” Coleman explains. “Most vegan butters are vegetable-oil-based and a combination of canola, palm and soy oils. Depending on the combination, they can be high in omega-6 fatty acids — the inflammatory ones — as well as not being suited for cooking with heat.” I should note that the way omega-6 fatty acids interact with the body, and what part they play in inflammation, is still something scientists are debating. “Luckily,” Coleman continues, “there are plenty of new alternatives made with olive, avocado or coconut oils.”

8) PAM: “Similar to vegan butter, traditional PAM is made with a highly-refined canola oil,” Coleman says. “Although the health impact of canola oil is still disputed, I can promise that you are getting plenty of it in your regular diet. Luckily, PAM offers alternatives using coconut and olive oil, so you can get the convenience of the spray while not adding more refined oils to your day.”

9) I Can’t Believe It’s Not Butter!: “I Can’t Believe It’s Not Butter! is similar to the vegan butters and PAM in that it’s a mixture of processed vegetable oils,” says Coleman. “They did remove the trans fats, typically found in solid vegetable oils, like margarine, which is fantastic. However, the rest leaves a bit to be desired. Moreover, they’re capitalizing on the olive and coconut oil trend by adding it to some of their recipes, and then putting it on the label. Still, it’s just an ingredient on top of their normal recipe, so it’s more of a marketing ploy than anything.” I can’t believe they would do that!

10) Margarine: Margarine is a processed assortment of vegetable oils designed to taste and look like butter. The problem is, in order to keep vegetable oils hard at room temperature, like normal butter, food scientists had to employ hydrogenation, which means pesky trans fats. “Don’t eat this,” Coleman emphasizes. “You don’t need it. Even McDonald’s stopped using margarine.”

There you have it, butterheads. Now leave me be so I can get back to churning.