Is Ranch Dressing a Guy Thing or a Girl Thing? An Investigation

In America, we've all got Big Dip Energy

Ranch dressing is zesting up the news again — this time, for momentarily pausing a presidential campaign. Sen. Kirsten Gillibrand’s Iowa City stop generated an inadvertent viral moment when resident Hanna Kinney passed through a group Gillibrand was addressing at a restaurant. It looked like Kinney was approaching the senator to speak with her, but instead she said, “Sorry, I’m just trying to get some ranch.”

And Ranch Girl — the “hero America needs now” — was born. 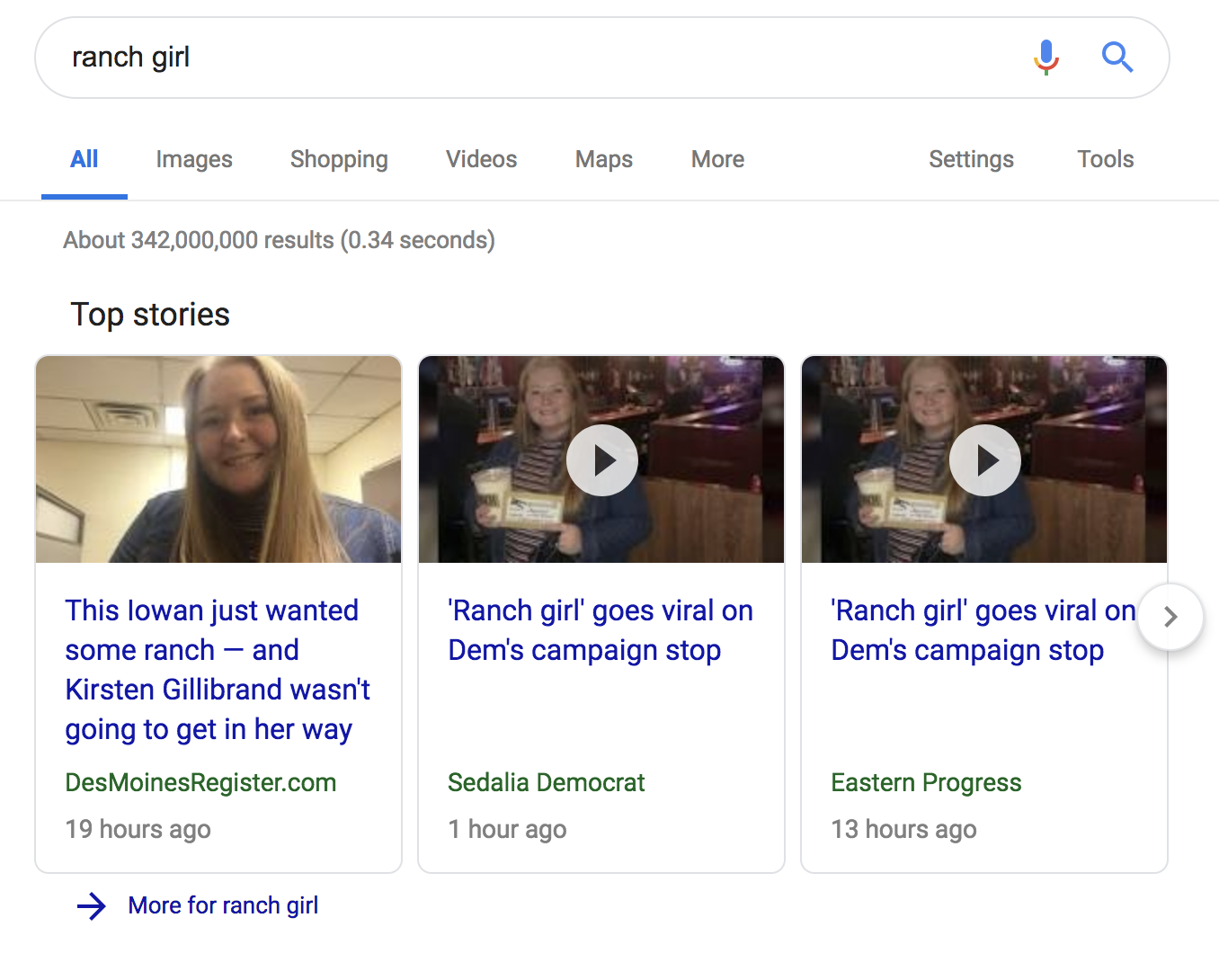 Cue heated debate. Ranch: Is it horrible? Wonderful? Classy or not? A weird Midwest thing? A weird California thing? Or… some kind of girl thing?

Some men in the MEL office insist ranch fandom is predominantly female, even though we’ve covered Hidden Valley’s ingredients on our own site, a men’s site, as a sauce that “tastes good on everything.” These men probably eat blue cheese because eating mold makes them feel tough, even as they watch jealously as others ranch it up.

But is it true? Is the typical ranch lover really a Ranch Broette, so devoted to her dressing that she dunks everything in it, slathers everything on it, and talks up that buttermilk sauce like it’s salad-dressing manna from heaven?

I asked Hidden Valley, which had no data to share about its customers’ gender breakdown. “Instead of focusing on gender, we’re more interested in who dips their pizza in ranch and who doesn’t,” said a rep.

There are no hard and fast statistics on who buys ranch dressing by gender, but we do know it’s the single most popular salad dressing in this country by a landslide (40 percent ranch; 10 percent Italian). Women do eat more salads! But they also eat healthier! And ranch isn’t that healthy! Ranch is one of the top condiments in some five states, according to a recent survey (the only other ingredient also holding top honors for five states is coconut oil).

We know that ranch is reviled but beloved, and that it tends to be associated with unrefined food tastes. The stuff has humble roots; it was invented by a plumber in 1950. But its flavor profile is not so different from other condiments a foodie would happily consume. Ranch is not so different from, say, spicy mayo, which is also hated on by classist jerks.

As the New York Times notes in a piece mapping out the way ranch is now included in everything from carrot dip to pizza to soda to vegan snacks, ranch’s combination of creamy, herb-y, tangy and spice is a lot like all these items people have no problem bragging about eating:

Ranch may be a modern phenomenon, but its flavor profile isn’t new at all. Many classic condiments also combine cream (or creaminess) with alliums (the family that includes garlic, onion, leeks and chives). Middle Eastern toum, Mediterranean aioli, Caesar dressing, French onion dip and the pasta sauce “Alfredo” served at places like Olive Garden all have the same profile: a mild, cooling base set against the heat of strong, pungent alliums.

Ranch’s popularity peaks in the Midwest, but I would’ve sworn it was more popular in my stomping grounds of the Deep South, which turns out to be the second-most-popular region for the stuff. Some of my California colleagues claim ranch on pizza as a Golden State thing, but you’ll find homemade-ranch slices at hip Brooklyn joints too. There’s a restaurant in St. Louis that puts ranch in every menu item, including the Bloody Mary, which features a ranch-infused vodka.

Which is to say, ranch is an entire-country thing, and that’s something to celebrate. In an age of Bourdain-legacy enthusiasm for street food and the elevation of anything edible with working-class roots, you’d think we’d realize that anything can be both high and low, often proving that lower is usually just as good.

But… what about the whole gender thing? We still don’t know if women are actually bigger fans of the stuff. Is the Ranch Broette a real phenomenon? Here’s what I found out.

The Washington Post spoke to Hanna Kinney, a senior at University of Iowa who may be ranch dressing’s fan-club president. She’s the designated person in her Bible study group who often tracks down the ranch when they order pizza, because, in her own words, “One, because some people are lazy, and two, I am dedicated to this ranch.”

They were having their usual pizza/study group at the restaurant Airliner when she realized it was time to grab the dressing and breezed through the Gillibrand campaign event, which had taken over downstairs. That’s when she became Ranch Girl, a folk hero, according to Meghan McCain.

But Her Supporters Are Men and Women, and Lots of Midwesterners

And so did a mix of Midwesterners:

Ranch Was, However, Created by a Man

Ranch dressing was made by a dude, though. That dude is plumbing contractor Steve Henson, who is from Nebraska. He invented ranch dressing in Alaska, but then he and his wife Gayle moved to Santa Barbara in 1954 to open Hidden Valley Ranch, an actual dude ranch and not a free-flowing pool of the dressing. That’s where they served the concoction to customers in souvenir jars, and that’s where the dressing was popularized before it was sold to Clorox in 1983 and turned into a shelf-stable product, as opposed to the original buttermilk-based Henson invention that spoiled more quickly.

There Was Another Ranch Girl Before This Ranch Girl

In 2016, South Dakota high school student Carson Haase dressed up as a bottle of Hidden Valley Ranch for a western-themed Homecoming dance. Hidden Valley noticed when the photo went viral, and she became Ranch Girl. They sent a boatload of dressing by way of thanks, and also started a scholarship fund for Haase’s friend and classmate who’d recently died by suicide.

There’s No ‘Ranch Man,’ but Homer Simpson Might as Well Be It

In a Simpsons episode where Homer Simpson, a man, trips on a carbon-monoxide-fueled fantasy, he exclaims, “Bring me my ranch-dressing hose!”

As Slate noted in 2005, “Homer’s tastes are meant to reflect those of the American everyman, and in this case the Simpsons writers nailed it: Ranch dressing has been the nation’s best-selling salad topper since 1992, when it overtook Italian.”

And Courtney Cox, who, uh, drinks it straight from a bowl.

Lots of Ranch Accessories Are Lady-Skewed

A Woman Slipped in a Puddle of Ranch and Sued Walmart

But she was standing in a men’s shoe department aisle!

You can buy a ranch fountain (like a chocolate fountain, but with ranch) featuring 27 bottles worth of the stuff from Hidden Valley for $100, and after they advertised the spot during the Super Bowl, brides allegedly made a bum rush on the site causing it to temporarily sell out.

But duh, they’re also great for Super Bowl parties, or any party!

One strong piece of evidence that women are the target market for ranch is that Hidden Valley sells jewel-studded bottles and/or gives them away for events one could strongly argue are lady-flavored.

There’s the bejeweled collector’s edition you could buy for $50 at one point, and then, to celebrate Meghan Markle’s marriage to Prince Harry as well as National Ranch Day, they gave away an even fancier bottle of the stuff covered in diamonds and sapphires that kinda looks like a bottle of Crown Royal. It was worth $35,000.

This fancy whiskey bottle style packaging Hidden Valley once sold for $25 is more like the fine liquor you’d buy your dad or boss to honor his great taste in high-end booze. Only there’s a bottle of Hidden Valley inside.

There’s Totally a Ranch Bro, Too

(In terrible ranch news, a man was charged with sexual assault which involved, in part, smearing a woman in ranch dressing.)

Ranch Is the Preferred Dipping Sauce for Man-Food, Wings

Women eat wings, men eat wings, we all eat wings. Still, we insist on treating certain kinds of meats as man food. Even if we indulge in this gendered perception of food, it’s worth noting: Ranch dressing is the overwhelmingly preferred dressing for Buffalo wings, winning 57 percent of the vote to blue cheese’s mere 35 percent.

Ranch Girl May Really, Really Love Ranch, but So Does Everyone

Kinney told the Post that everyone was trying to turn her single-minded ranch procurement into some political thing, when, “I’m literally just a girl getting some ranch, and [Gillibrand] just happens to be in the way, and the crowd just happened to be there,” she said. “People are grasping at straws.”

Perhaps much like the straws of trying to figure out if women like ranch more than men? In the end, I can’t prove women have a stronger ranch alliance. But one thing is clear: Hidden Valley Ranch is having it both ways, marketing to men and women alike, because that’s good marketing. By turning ranch into something everyone can not just eat, but wear, celebrate, drink or gift, it’s clear it’s an everyperson dressing.

Before the Ranch Girl moment, ranch use didn’t swing liberal. Could ranch narrow the political divide? Will Kendall Jenner star in an ad bringing salad dressing to police and protesters? This Ranch Girl thing has got legs. Big Dip Energy is the new BDE.

So whether it’s the lifelong, elusive quest for some additional tangy flavor to deepen our understanding of life’s purpose, or maybe just the only way imaginable to self-soothe during the next election cycle, surely there is one thing we can agree on: Ranch has no gender. Even if you’re buying a keg of it.