…Until now. It’s a journey to trust a medical system that’s been historically detrimental to Black American health. But change is afoot — in the form of an unconventional barbershop campaign

“The other day when I talked to you, you said that the one thing you do that’s absolutely totally Black is that you disregard good advice like getting a vaccine,” my pop recently told me with a laugh. “Pearl [my pop’s wife and my stepmother] got a big kick out of that. I told her, ‘I’m so disappointed in you.’”

This time, we both laughed.

My pop and I were discussing the fact that I’ve never gotten the flu vaccine. This year, though, my girlfriend suggested otherwise. She made a common-sense argument based on self-protection, which she followed up by pointing out that I’d also be protecting vulnerable populations. Both good points.

Yet, I was still hesitant.

I certainly trust science. I’m just suspicious of capitalism and how it motivates American health care. But more than anything else, it’s impossible for me to overlook the rampant amount of racism in this country’s medical system. There are numerous statistics that detail how racism causes worse health outcomes for Black Americans — how it lowers life expectancy and affects (all to our detriment) infant mortality, medical malpractice, organ donation, emergency room wait times and ambulance response times. Thus, my distrust of American medicine feels wholly reasonable.

But my racialized reluctance and bias is the exact sort of challenge medicine must now contend with in order to convince skeptical Americans to get inoculated with the COVID vaccine, particularly Black Americans. A recent Kaiser Family study found that, statistically speaking, half of Black Americans are unlikely to get a COVID vaccine. That’s despite the fact that 39 percent of Black Americans reported that “they know someone who has died from the coronavirus, nearly double the rate for white adults.” Data from the CDC also shows that of all the COVID cases in the U.S., more than half have been Black or Latino. Similarly, Black and Latino Americans are more likely to die of COVID, with racism in medicine being the obvious explanation.

Whenever a Black person mentions America’s racist history in medicine, three words almost always come to mind: the Tuskegee Experiment. For 40 years, Black doctors and nurses ran a syphilis experiment that used Black men like animal subjects to see what the effects of the disease would be if left untreated. The men were told that they were involved in a study of “bad blood,” and that they were being treated for it. That was a lie — one that Black America has never forgotten. “Every time shots are brought up, that’s the first thing I think about,” my colleague Ernest Crosby III, MEL’s video producer, tells me. “The people who did that were monsters. So it’s hard for me to come back from that.”

This sort of distrust runs deep in the communities of Black America. Regardless of whether you’re in Memphis or Detroit, Newark or Inglewood, you’ll hear this sort of thinking. “As a Black person — based on the history of the decisions made for Black people — it’s hard for me to trust that, all of a sudden, this year, they care,” Ernest says, summing it up perfectly. Moreover, such skepticism feels like a healthy awareness of the world we live in, a shrewd position to take based on how people’s biases affect Black lives.

That said, this same position makes for a painful irony, since it was an enslaved African man who first introduced vaccinations to the West.

In 1721, there was an outbreak of smallpox ravaging Boston. A local religious leader named Cotton Mather, a prominent figure from the Salem Witch Trials, listened to his slave Onesimus, who showed him how to take a small amount of smallpox pustule and use it to inoculate a person with a subdermal injection, a practice that was widespread in sub-Saharan Africa. Mather advocated for the medical community in Boston to do the same, but it fell on deaf ears. Critics refused to use any medicine based on the word of a slave. Others argued that the pandemic was God’s will, and thus, they should do nothing to oppose the plans of Providence. (Sound familiar?)

There was one doctor, however, who listened to Mather. He chose to inoculate his youngest son and two of his slaves. When all three survived, the practice of inoculation began to spread and the smallpox pandemic was quelled.

Admittedly, this is practically ancient history to modern Americans — and certainly it remains more unknown than not (even to the Black community). Nor does it necessarily undo the damage of Tuskegee, given that it happened some 200 years prior. Which is why for the last two decades, Stephen Thomas, a professor at the University of Maryland’s School of Public Health and director of the Maryland Center for Health Equity, has been attempting to leverage the power and trust of the barbershop in order to improve Black health outcomes. His approach has proven to be highly effective.

“I’m a Black man. I go to a Black barber shop. I also happen to be a professor in public health,” Thomas tells me. “So I’m sitting in the barber shop on a Saturday. You know how the place is — you’re going to be there half a day, maybe longer. You’ve got a TV on every wall. They’re all on different channels. The music’s on. That’s when somebody comes into the shop. Let’s call him Joe. He hadn’t been around in a while. Someone says, ‘Where you been?’ ‘I was in the hospital,’ Joe replies. ‘Took me to the emergency room, told me I had a heart attack. They kept me in the hospital for three days.’ He pulls out a pill bottle and says, ‘They gave me these pills, told me I have to take them for the rest of my life.’ Now everybody in the place is really listening. The barber says, ‘Joe, if you take those pills, you know you won’t be able to keep up your obligations.’” (The suggestion obviously being that the new pills were gonna give Joe a limp dick.)

“So, I’m listening and realizing, he’s in the hospital for three days, got a diagnosis, got a prescription, filled it and he’s still not going to take those pills,” Thomas continues. “Joe’s doctor has no idea that there’s somebody in the community — his barber — with that kind of influence on his patient. No MD, no nothing, just trust. Joe’s not taking those pills. He may not even tell his doctor he’s not taking those pills. That’s how it happens. You know how black men are: If something hurts…”

“…we keep it to ourselves,” I say, finishing his thought, like call and response.

“We don’t go until it hurts. Then, when it hurts, we don’t go until our arm’s falling off,” Thomas explains. “These days, we know more than we’ve ever known about how to prevent chronic diseases, including cancer, but people have got to come in early. It only works with early detection. We’ve got Black women showing up with breast cancer, and they’re already at stage IV. Not a lot you can do. You can’t blame that woman for why she didn’t come in sooner. You can’t blame that Black man for why he’s not going to take those pills. He trusts his barber more than he trusts the doctor.”

But that is why Thomas decided to meet the people exactly where they’re at: “I was sitting there, saying to myself, ‘What if the barber was a partner?’ The barber is just leaning into his own information. What if that barber said, ‘Hey, Joe, if you’re ever getting any side effects, tell your doctor. They can change your medication. They can change the dose. Just talk to them’? What if he encouraged him to talk to his doctor, not try to be a doctor?”

“Fast forward about a decade,” Thomas continues. “We launch our initiative with support from the National Institutes of Health. It’s called HAIR — Health Advocates In-Reach and Research. In our network, we bring the health professionals into the barber shops. The cardiologists, the gastroenterologists, the specialists that people can’t even pronounce. Now, in the barber shop, they’re having a conversation they otherwise would never have. White health professionals, who have never been in these spaces, they learn to be much more culturally competent. I think that’s very important and transformative.”

Another aspect of his initiative is what’s called the Barbershop Health Box. “Imagine you walk into the barbershop and on the wall is a mailbox, but it’s wrapped in the barber pole colors,” Thomas explains excitedly. “Then there’s a set of index cards and a pen. All you do is write down any question you want. The client could write a question. A barber can write a question. Drop it in the box. My team comes. We pick up the mail in the Barbershop Health Box. We go back, and we answer those questions in the form of infographics — in plain language. We post the infographics on Instagram. If you go to Instagram, and type in ‘barbershop healthbox,’ all one word, it’ll pop up.” 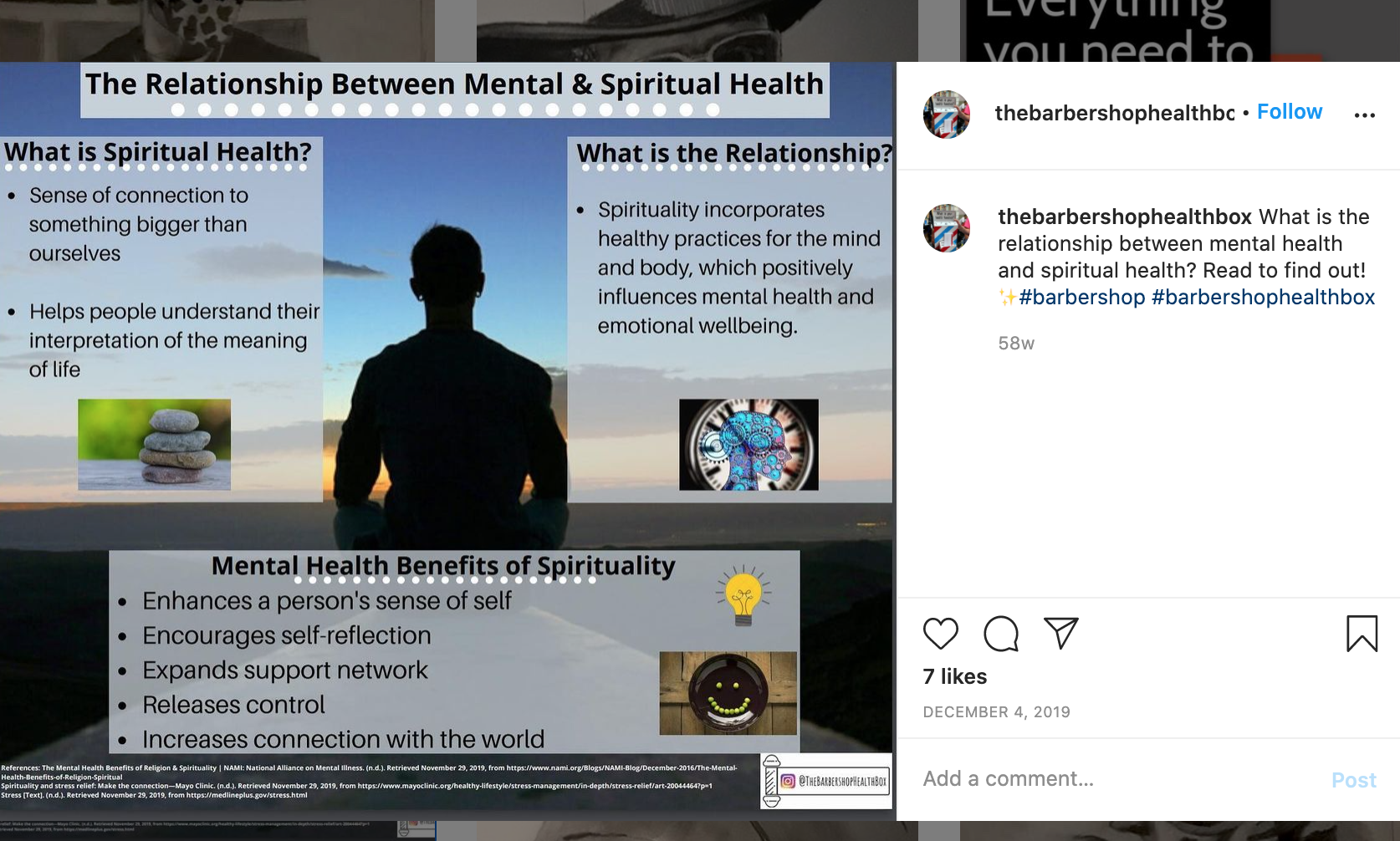 “It all builds trust. They feel like we’re listening to them,” he adds. “They see we’re responding to their needs. And so now, maybe, they think we’ll listen to them about this colorectal cancer thing. Maybe we’ll listen to them about this [coronavirus] vaccine thing. If you see the news, the way they’re trying to reach our community is presidents of HBCUs getting the shot. But they don’t have the credibility Big Mike got or Big Joe got or Big Tony got. That’s the point. Right now we’ve got barbershops around the country, calling me, emailing: ‘How can we be part of this?’”

It’s this sort of fresh thinking that has hugely positive downstream impacts. After all, sometimes it only takes a conversation. Which, for me, was with my pop. At the end of our phone call, he laid out his final argument for vaccines to me, his reluctant son. “What would be a reason not to do it? It can’t possibly hurt you, and it may save your life. So take your vaccine. I’m one of the hardest persons in the world on people who have done things that they know better than to do.”

He ain’t lying about that. No one is harder on those acting a fool than my pop. “So, the last thing I’m going to do is put myself in a position for me to fuck with me. If I don’t take the vaccine and I get sick, I’m gonna be sitting there with me saying, ‘See, the reason you’re here is because you knew better, motherfucker. You knew better, and you didn’t do it.’ I can’t get up and walk out on me. I can’t put me out. I’m in there, stuck with me. So, I say, ‘I’m taking the vaccine.’ That’s all there is to it.”

As usual, he was right. And so, this year, I got my first ever flu vaccine. And whenever I can get a COVID vaccine, I’ll get that, too.

I imagine my discussion with my pop isn’t all that dissimilar from those many others are having in the Black community right now. The key is that any meaningful dialogue involves both parties listening. Advocacy for public health, particularly Black health, can’t be one-sided or empty. As Thomas knows better than anyone else, it must feel as real as any conversation we’d have at the barbershop.