The growth and influence of the subreddit, where you’ll regularly find videos depicting violence against women, is due in no small part to how easily its content finds its way to the top of the platform overall

After tweeting a “pretty standard joke about how much copying and pasting I do while coding,” Anna, a coding instructor in New York, received a mostly normal, arguably expected amount of trolling.

“A few people commented, pretty much baiting me, saying, ‘She must not be a good developer at all,’ or ‘I wouldn’t want a woman like that on my team,’” Anna tells me. “Now, I’m a drag queen, so I don’t identify as a woman, but I wanted to show that even subtle comments against women wouldn’t be tolerated and clapped back.” 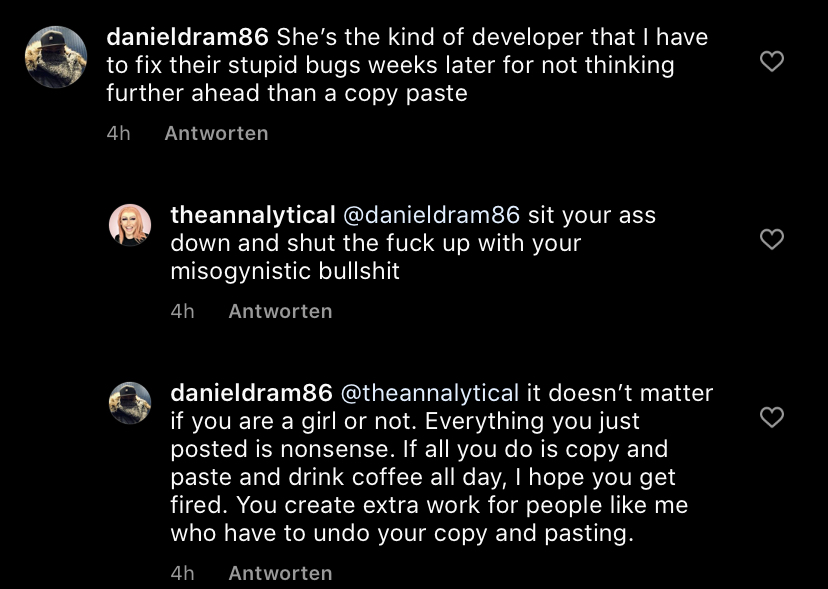 Unfortunately, unlike the thousands of short-lived flame wars that happen daily in the Instagram comments section, things didn’t end there. Suddenly, Anna’s Instagram account was “swarmed with a bunch more similar comments.” After investigating, Anna says someone had taken a screenshot of the interaction and posted it to the subreddit r/pussypassdenied, a community of 575,000 subscribers that describes itself as a place “where women are not allowed to use their gender as a handicap or an excuse to act like assholes. Yay equality!”

Paired with the title “You’re a Misogynist If You Tell a Woman She’s a Bad Programmer,” the screenshot of Anna’s comment quickly became one of the highest rated posts of the year with more than 18,000 upvotes and 650 comments. Anna appealed to both Reddit and the sub’s moderators, hoping to at least remove any identifying information from the screenshot, but came up empty.

For the uninitiated, “pussy pass” refers to a “belief circulated in the manosphere (though also in parts of mainstream culture), that women use their gender or femininity to side-step taking responsibility for their actions and society reinforces this,” explains Ashley Mattheis, a fellow at the Institute for Research on Male Supremacism. “This idea has its roots in the primary conspiracy theory undergirding manosphere beliefs, which positions the government as in support of and controlled by women — even if they don’t hold elected positions of power.” So when it comes to the “pussy pass,” she adds, “their claim is essentially that women expect to get away with bad behavior even though they simultaneously want ‘equality.’”

As interpreted by the manosphere, “equality means that ‘if women want to be like men, then they should be treated like men’ — and as the subreddit shows, these men understand ‘being treated like a man’ to include inherent violence and brutality,” Mattheis continues. “It’s an anti-feminist version of the notion that ‘might makes right,’ which is predicated on dominance as a primary aspect of the construction of ideal masculinity in these online cultures.”

Whether celebrating a man who physically pushes a girl who poured water on him, reveling in the wreckage of a car with the bumper sticker “You just got passed by a girl” or highlighting a snarky exchange with a woman on Tinder, Mattheis says almost every post in the subreddit serves to reinforce the same basic ideals.

“Posts purport to ‘show’ that when women don’t know their ‘correct’ place — and society doesn’t hold them to account — then two things follow,” she explains. “One, women’s uncontrolled behavior is monstrous, and two, men respond with violence because they are forced to it by women’s ‘bad’ behavior — i.e., that men supposedly react with violence toward women because they just can’t take it anymore — and clearly the women deserve it.”

Of those four subreddits, r/pussypassdenied is the only one that hasn’t been quarantined, banned or largely abandoned. If anything, posts from r/pussypassdenied regularly get enough upvotes to be featured on the “front page” of Reddit where they reach millions of people who don’t subscribe or even know about the subreddit.

This, in turn, “acts as a type of ‘red-pilling’ resource, where the volume of material serves as evidence of their version of ‘truth’ and ‘reality,’” Mattheis explains. On January 22, 2020, this video of a man throwing a woman to the ground after she kicked him appeared on Reddit’s front page. In the ensuing 24 hours, r/pussypassdenied welcomed roughly 10,000 new subscribers.

Moreover, Mattheis adds, “The portrayal of these violent materials as humorous — in the sense that it can be attributed to ‘edge lords,’ ‘satire’ or ‘dark humor’ — also allows these materials to be more widely circulated by individuals who may not identify as part of manosphere cultures but still identify with these types of misogynist and anti-feminist narratives, including women. Broadly speaking, it’s used to help shift the Overton window about women’s roles and violence against women as, at least, understandable when masculinity is ‘threatened.’”

While Anna escaped largely unscathed, Mattheis sees the initial “swarm” of harassment Anna experienced on Instagram as a real-world manifestation of the subreddit’s evangelism. Namely, that the subreddit has enough sway to influence a “networked harassment attack,” wherein a community exploits and weaponizes the target’s social media accounts against them.

“The goals of such attacks against women from manosphere communities — if not an enjoyable community activity similar to their enjoyment of the violent memes and videos on the subreddit — include, at a minimum, punishing, silencing or pushing women out of online spaces,” she explains. “These attacks are particularly insidious because there’s almost no way to get away from them once they start, and there are no sufficient or even consistent institutional avenues of recourse through the platforms, police, etc.”

“There are indications that ‘deplatforming’ works, [and] banning material at such a scale that it forces communities or users to different platforms can work, too,” she continues. “But ultimately, the first step any platform should take is to more consistently enforce their existing rules regarding content and users in relation to disallowed hateful or violent material and content.”

In Anna’s case, enforcing the existing rules would’ve certainly lessened their headache. “Plenty of subreddits showing cringe or rude interactions will mandate removal of identifiable information,” Anna tells me, and r/pussypassdenied is no exception — the number one rule listed on the subreddit is “No posting personal information.” Still, the moderators refused to take action: 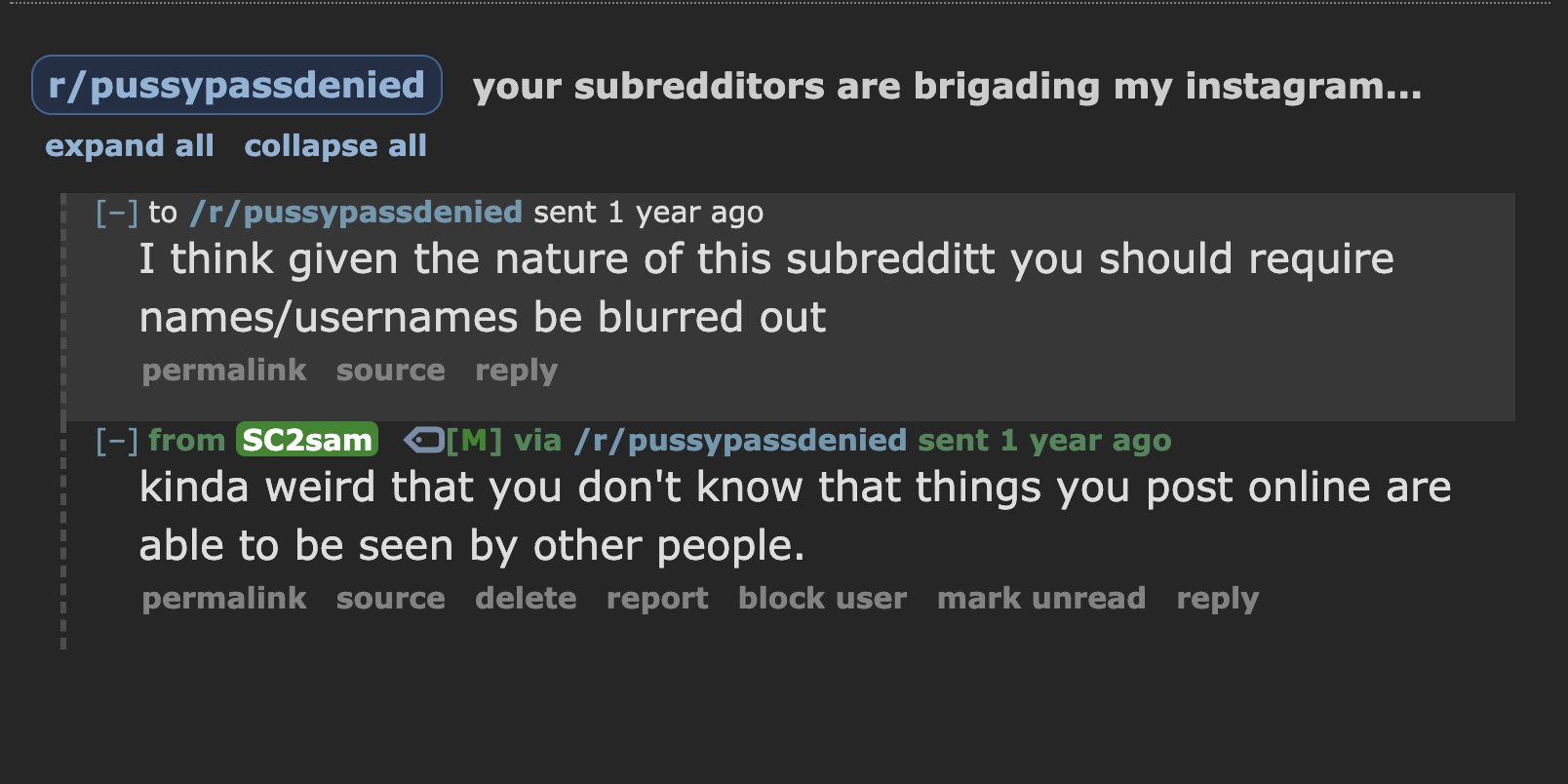 Reddit has yet to comment on whether it’s monitoring r/pussypassdenied or if it has plans to keep the sub from reaching the front page, but both Mattheis and Anna argue that enforcing the community’s existing rules would be a good place to start. Either way, Anna did what they could to make the best of it — and show that they were actually right all along. “Luckily, I didn’t get too much hate,” Anna says. “In fact, I ended up making a whole tutorial on YouTube creating a website with only copy-pasted code to show that I did know what I was doing.”