I’m in Love With Pumpkin Spice Manhattans. Go Ahead and Laugh.

Is there a bigger punchline in the autumn than the pumpkin spice latte?

Starbucks launched the drink without much fanfare in the early aughts, but within the decade, the “PSL” became its best-seller — and launched a bonafide American food trend, with pumpkin spice swallowing up seemingly every food product it could, regardless of how awful the results tasted.

In one sense, all the derisive jokes wrote themselves; I mean, merits of the latte aside, who wants pumpkin spice dog treats? But in another view, the rise and fall of pumpkin spice had a lot more to do with the idea than the flavor itself. So many annoyed takes fixated on a certain stereotype of a white girl in North Face, Instagramming her PSL with cringe hashtags. I think Rebecca Jennings of Vox sums it up best in her breakdown of the Starbucks pumpkin spice latte and the culture war it wrought.

“Since its inception in 2003, the pumpkin spice latte has become something of a straw man for discussions about capitalism, seasonal creep and the meaning of ‘basic,’ resulting in widespread hatred for an otherwise innocuous beverage,” she writes.

At least now, a decade since the trend took off, ripping on pumpkin spice is about as basic as the PSL itself. And I’d like to argue that this ingenious blend of cinnamon, nutmeg, clove and ginger needs an earnest revival in the face of so much mockery. I may personally think pumpkin spice makes coffee taste like cheap ass, but that doesn’t mean we should relegate it to mere pie duty for the rest of time.

Hence, a cocktail. And as it turns out, there is a serious dearth of boozy autumnal cocktails that feature pumpkin spice. What I did find tended to be more fruity and effervescent, as with this blend of Scotch, pumpkin and ginger beer or this pumpkin-ginger “martini,” both of which look perfect for a hot September afternoon. But the autumn of my imagination doesn’t involve refreshing spritzer-like drinks that I can throw back at will. For me, the season conjures up something richer and less sprightly — a drink strong enough to make you sip and contemplate the turning of time, all while highlighting the warm spice flavors we’ve come to associate with fall.

Thankfully, I stumbled across bar legend Jeffrey Morgenthaler’s “Autumn Leaves.” Named after the jazz standard, it blends peppery rye whiskey with apple brandy, sweet vermouth, herbaceous Strega and several dashes of strong cinnamon tincture. Seeing rye and vermouth set off a lightbulb in my head, because that’s what defines the Manhattan, a rich booze-forward cocktail that remains a classic even after 150 years. So what if we brought pumpkin spice’s complexity to rye and vermouth, while stripping away some of the savory complexities of Morgenthaler’s take?

I wondered whether the best maneuver would be to infuse the spices straight into the whiskey, but realized that while it would be delicious, the resulting cocktail wouldn’t quite capture the round, buttery flavor of pumpkin at all. Instead, I decided to incorporate a thick brown sugar syrup infused not just with the spices, but with real pumpkin puree. I love this recipe, and simply played with the ratios to increase the intensity of the spice, because we’re only using a small amount in this cocktail. The method is simple: You mix brown sugar, pumpkin puree, pumpkin spice and a few other flavorings together in a pot, stir over heat until it’s smooth and combined, then strain.

It’s not enough to just dump some of this sweet spiced syrup into a conventional Manhattan recipe and call it a day. Adding sugar on top of intense sweet vermouth is too overpowering; it’s the biggest reason why I sought out Dolin Blanc, a special “bianco” vermouth that leans more floral and herbaceous. You could use your favorite dry vermouth if you can’t find a bianco, but the point is that we need to reduce the sugar content so that the spirits aren’t fighting with the syrup for space on your tastebuds.

Mixing Dolin Blanc with a brown liquor is a bit unconventional, but I figured its fragrant apple and elderflower notes could stand up to the spices. For the rye, I went with ol’ reliable — overproof Rittenhouse Rye, which clocks in at a stout 50 percent alcohol rather than the usual 40 percent. Rounding out the mix is a splash of orange bitters, which livens up the drink and compliments the Dolin Blanc. 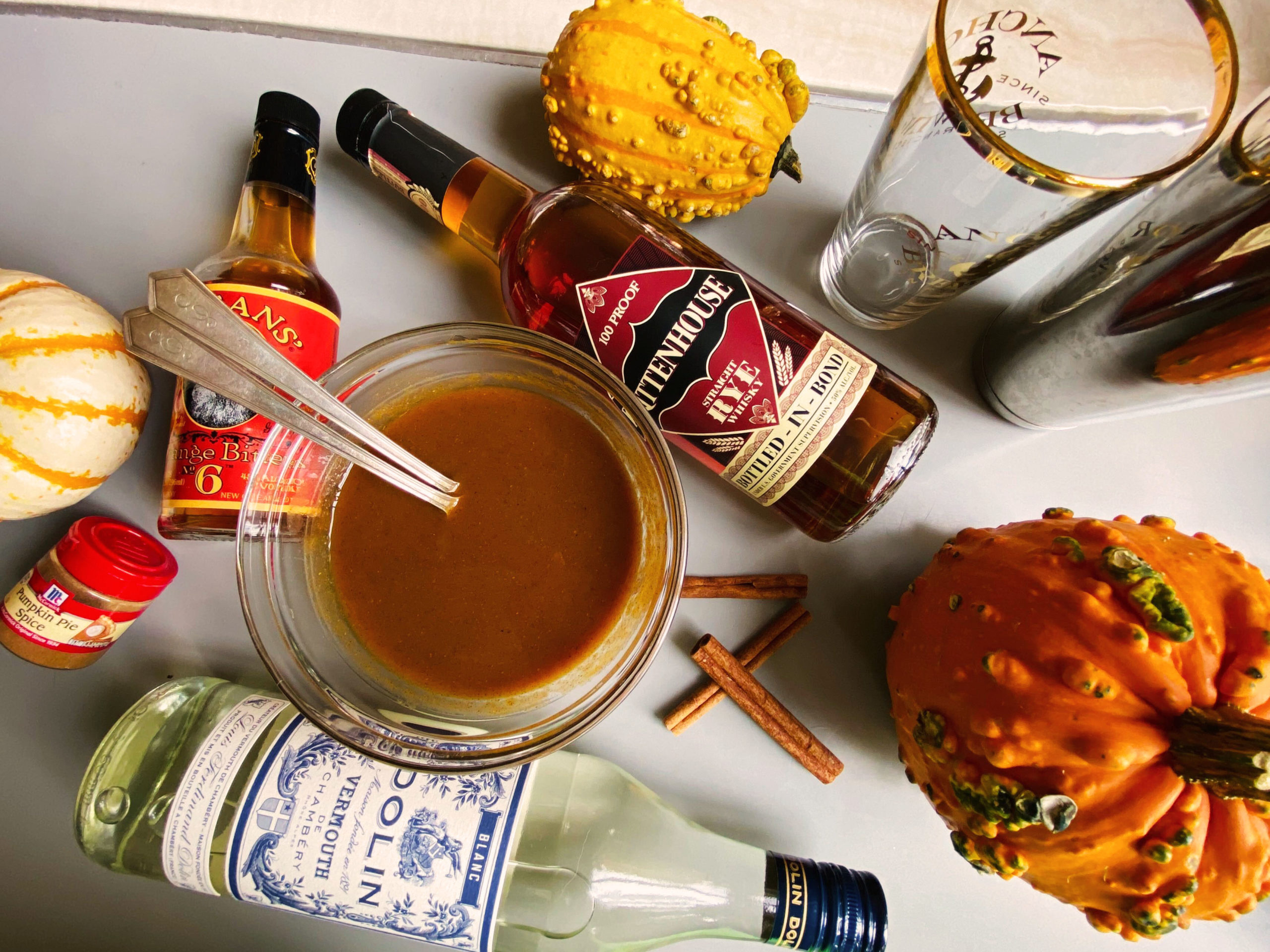 Stirred (not shaken) together, you get a drink that’s lighter than a conventional Manhattan, despite the addition of sugar syrup. Using a spicy rye helps ground the flavors, and I think the pumpkin-puree infusion creates a thicker body for the drink. It doesn’t taste like a PSL, or anything else “pumpkin spice”-flavored, really. Indeed, after two of these things, I realize there really is no punchline to write here, even though I dreamed of the cocktail as a fall-themed gag.

In a small saucepan, combine the water and sugar and stir over medium heat, making sure it doesn’t reach a boil. Once the sugar is melted, add the pumpkin puree, spices and salt. Stir and cook for 2 to 3 minutes, lowering the heat if it starts to simmer. Then pass the mixture through a fine mesh strainer into a bowl, using a spoon to help push the syrup through. Stir in the vodka at the very end — the booze fortifies the syrup and helps it last longer without spoilage in the fridge. 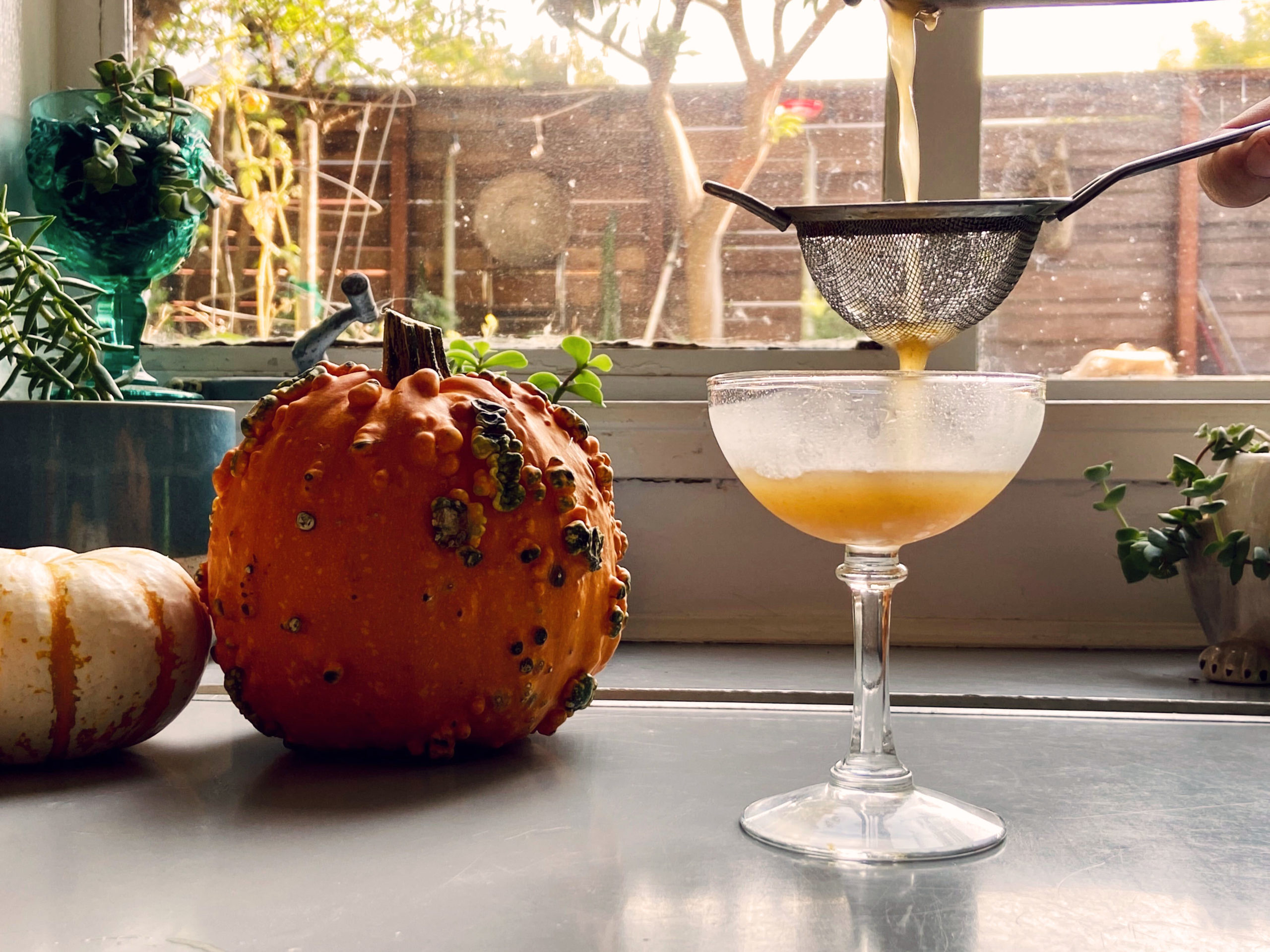 Add all the ingredients to a mixing glass, then stir the mix with a spoon to help the thick syrup blend with the booze. Fill your mixing glass with ice, then begin stirring the drink, using a long barspoon to “spin” the ice. (A chopstick works wonders if you don’t have a barspoon.) You want to stir for a full minute, to homogenize the pumpkin syrup and properly dilute the cocktail. Double-strain the mixture into a coupé or martini glass, using a strainer and a fine mesh filter to catch any lumps.

Stand outside and sip while contemplating how autumn represents the inevitable mortality of all things, including pumpkin spice as a trend.