A Not-Quite-Complete History of the Puffy Toilet Seat

From the off-white medical-looking ones to the colorful knitted and furry kinds, who invented these weird-ass things (or rather, weird ass-things), and why?

“In recent years, seats have been adopted to provide various functions in addition to their basic seating function. Toilet seats, for example, have been designed to provide features which increase the comfort of the user. One particular type of toilet seat commonly referred to as a cushioned toilet seat, is shown in U.S. Pat. No. 4,451,940. But this reference does not provide any audio capability.”

It was after reading this line above — a patent description for a cushioned toilet seat that plays music — that I realized, after days of research, that if I didn’t stop looking now, I might never escape the rabbit hole my mission had hurled me down.

It started out simply enough: I wanted to understand the history of the cushioned toilet seat. You know, those weird, puffy seats that almost seem like a medical device and make that deflating pfffft sound when you sit on them. I wanted to find out where they came from, who uses them, and anything else I could on these weird-ass things (or, rather, weird ass things). I figured I could do it. After all, I’ve previously found the world’s foremost expert on public expectoration to discuss urinal spitting, not to mention unearthing a bunch of guys who have urinals in their homes, so I figured this level of toilet trivia would be, well, a piece of piss.

Boy, was I wrong.

If you Google “who invented the padded toilet seat,” the internet spits back at you two names that seem promising. Once I looked deeper, though, both seemed problematic. The first was Matt DiRoberto of Worcester, Massachusetts; this name is listed on Wikipedia and several other places with the following sentence: “In 1993, Matt DiRoberto of Worcester, Massachusetts, invented the padded toilet seat, an early 1990s fad.” But frankly, 1993 seemed a bit late to me, as I remembered a few of my relatives having them earlier than that — other sources of mine were telling me that their grandmothers had them going back to at least the 1970s. So suspicious of this info was I that I tracked down Matt DiRoberto of Worcester, Massachusetts, and asked him if he’d invented the soft toilet seat. He replied with a prompt “no.”

Okay, so maybe a different Matt DiRoberto of Worcester, Massachusetts, invented the seat. But given the scant information and the out-of-sync timeline, I figured this was likely bullshit, just like the legend that the fanny pack was invented by someone inspired by a kangaroo.

The other guy the internet claims to have masterminded the cushioned toilet seat is David Harrison. I was unable to confirm this with him directly, since it seems he passed away. But in addition to trivia claims that Harrison invented the soft toilet seats, he does indeed have a patent dated 1972 for a soft foam toilet seat. Again, though, it’s not the end of the mystery: The details of the patent make clear that this isn’t the first soft toilet seat ever, it’s just a new and improved way to make it.

Going back even further, the earliest patent for a soft toilet seat I could find is from 1955 by a guy named Stanley J. Samuels. His patent does make it appear that he’s introducing something completely new. The only precedent for it that I could find is a rubber toilet seat from 1941, which I wouldn’t consider the same thing. Other patents exist for soft toilet seat improvements after 1955, like this 1979 model and even a 2007 model for a gel-filled one. There are also weird variations, like the musical one I mentioned earlier from 1994 and a fragrance-filled one from 1993, but it seems most of the credit goes to Samuels for its inception and Harrison for its refinement.

As for when they first hit the market and how they became popular, well, this all seems as muddled as the origins of the seat itself. Bathroom experts that I consulted — like this guy, this guy and this woman — all had no idea. The only thing that seems clear is that the toilet seat company Beneke sold Harrison’s model, as Harrison was an employee, but other companies sold other models before and after that. And while I assume — because info on this was also mysterious — that there are fewer soft toilet seats sold today, they are still very much available, as evidenced by this 2019 article pointing out the best options.

None of this is even getting into the cousins of the soft toilet seat — the knitted toilet-seat cozy and the furry toilet-seat cover. It’s even more difficult to discern where these came about, mostly because I don’t think people patent such things. For the cozies, the most I could think to do was try to figure out when people started putting cozies on shit to begin with: The first recorded use of a tea cozy — or cosy, to give it its more appropriate U.K. spelling — was in England in 1867, as a means of keeping tea warm in the pot. This was a completely logical, practical item when compared to what would come later on, as people started putting cozies on things like toasters, toilet paper and yes, the toilet seat.

When I first started looking into cozy-making, I felt a warm glow of affection for this odd but charming hobby, born as it seemed out of an excess of both time and yarn. But then I started to find a lot of these cozies depicting “mammies” in all sorts of racist, degrading fashions, and my feelings quickly changed to Fuck these racist old biddies and their weird, racist cozies. When all this cozy-making died out is hard to say: While hobbies like this are certainly carried on by some, my guess is that when women started to enter the workplace in the 1950s and ’60s, many of them found better things to do with their time and money than knitting woolly overcoats — racist or otherwise — for everything they owned.

Those fuzzy, carpeted seat covers are also difficult to track in terms of when exactly they began, but by looking through old catalogs for Sears, JCPenney and the like, I was able to piece together a bit of a timeline. In the 1930s to the 1950s, pastel bathrooms were a big deal, often featuring colored toilets in soft hues of pink, blue and green. Due to these pretty colors, it seems that toilets remained mostly bare, but some toilet lid covers did exist, as I was able to find a few from the ’40s and ’50s, though it’s hard to say if the disease that was the carpeting of toilets had yet spread to the seat itself.

By the 1960s, pastel fixtures began to die out and it became peak time for carpeting shit, as evidenced by pictures like this, this, and this monstrosity from a 1961 Sears catalog. 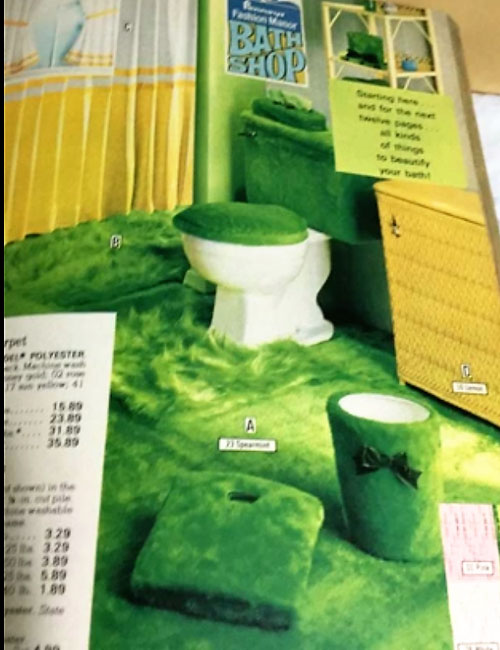 They carpeted the scale in that bathroom. The scale! (As an aside, it’s also worth noting that you used to be able to order a monkey through the Sears catalog, which shows that not everything since then has changed for the better.)

Carpeting the toilet continued through the 1970s in similarly garish fashion. According to Bo Sullivan, founder of Arcalus Period Design, the trend finally started to die out in the ’80s, but you can still buy such things today, should you decide that you wish to have the experience of accidentally sitting on a chinchilla every time you go to poop.

So who’s actually buying any of these products? The audience seems, at a glance, to be generic “old ladies,” as best evidenced by this Reddit thread all about soft toilet seats, how horrible they were, and how everyone’s grandma had them. And it makes sense, since much of the marketing for these products appears aimed at the elderly and/or disabled, but it also seems far too oversimplified.

I personally remember a rather young uncle of mine having one when I was growing up. When I asked him about this, he said that he had no good reason for getting one other than it was the “in” thing back in the early ’90s when he had it, which squares nicely with the claim that it was a “1990s fad,” even if it wasn’t actually invented by Matt DiRoberto of Worcester, Massachusetts. My friend Krystal recalled that her fortysomething grandmother had one dating back to the ’60s, and that she used it not for comfort but because it was viewed as luxurious. Another friend, Julie, said that she bought one herself recently for the sake of comfort, but she’s only in her 50s — hardly the decrepit “old ladies” Reddit spoke of.

Either way, it’s hard to argue in favor of the things. While added comfort is the obvious benefit assigned to any sort of cushy toilet seat, along with the luxury of not having to sit on a cold seat, the near consensus seems to be that there are more cons than pros: The Reddit thread lamented the soft seat’s tendency to stick to your sweaty ass on a hot day, and both this same thread and my own anecdotal sources cited its tendency to crack, revealing its cushiony insides.

This cracking made me consider the idea of cleanliness and what exactly might be breeding inside that cushioned toilet seat. Jason “The Germ Guy” Tetro, author of The Germ Files and host of the Super Awesome Science Show, confirms, “If it is solid and nonporous like most seats and puffy seat covers, the droplets will fall onto the surface and eventually dry. So there’s no real difference from other toilet seats. But if those seat covers are torn, the water can seep inside and they may allow bacteria as well as fungi to grow.” He adds that they’ll likely get stinky not long after they tear, so they should be replaced once that happens (which seems to be often).

“As for the knitted covers,” Tetro says, “they will absorb all the droplets much like a washcloth or towel. Depending on the humidity, they could get musty and possibly allow all sorts of bacteria and fungi to grow.” So they’re gross right up front, no tearing required.

While that’s not quite all there is to know about puffy toilet seats — they’re still hiding some mysteries in those musty, bacteria-laden crevices — hopefully it’s enough to convince you never to buy one. Unless you really, really need “a bit more cushion where you’re pushin’.”