The Newest Fad Diet Is Just Not Eating

Prolonged fasting is for only the most extreme keto dieters. We talked to guys who swear by it — despite all the risks

Kyle, a 28-year-old in California, weighed 472 pounds a little over a year ago. And then he found fasting. Not intermittent fasting, not One Meal a Day. Kyle fasts for 20 days at a time, four times a year.

Kyle is currently nine days into his 20-day fast. It will be his fifth extended fast, and he says he’s never felt better.

Chan, a 21-year-old in Texas, took up fasting when he realized his life was in shambles. “Life got so bad, I decided I needed a shamanic experience,” he tells MEL. “So I took a 5g psilocybin trip and I embarked on a journey to rediscover my passions and set my life in to order. … I bought some supplements the internet told me to take during my first fast, and it lasted five days.”

I found Kyle and Chan in the subreddit r/fasting, a community of people who embark on extended fasts. It happens to be one of the fastest-growing communities on Reddit. People post detailed urine tests and lipid panels measuring ketosis and other vitals, in addition to before-and-after pics and discussions of what their first meal should be after 30 days.

There’s even an app, Fastient, they use for tracking the length of their fasts, calories burned and their feelings.

Obviously, there are risks involved. Dr. Keith Kantor, a nutritionist and panelist for Consumer Health Digest, says he would not use fasting as a weight loss tool. He calls himself “a supporter of intermittent fasting and short fasts that last a couple of days,” but warns that “prolonged fasting should be done under a doctor’s supervision and is not for everyone.”

Research suggests “fasting will improve your focus and ability to think more clearly, and it has been shown to improve your ability to control impulsive eating due to insulin regulation,” Kantor tells MEL.

But people lose weight, too, and brag about it all over r/fasting. 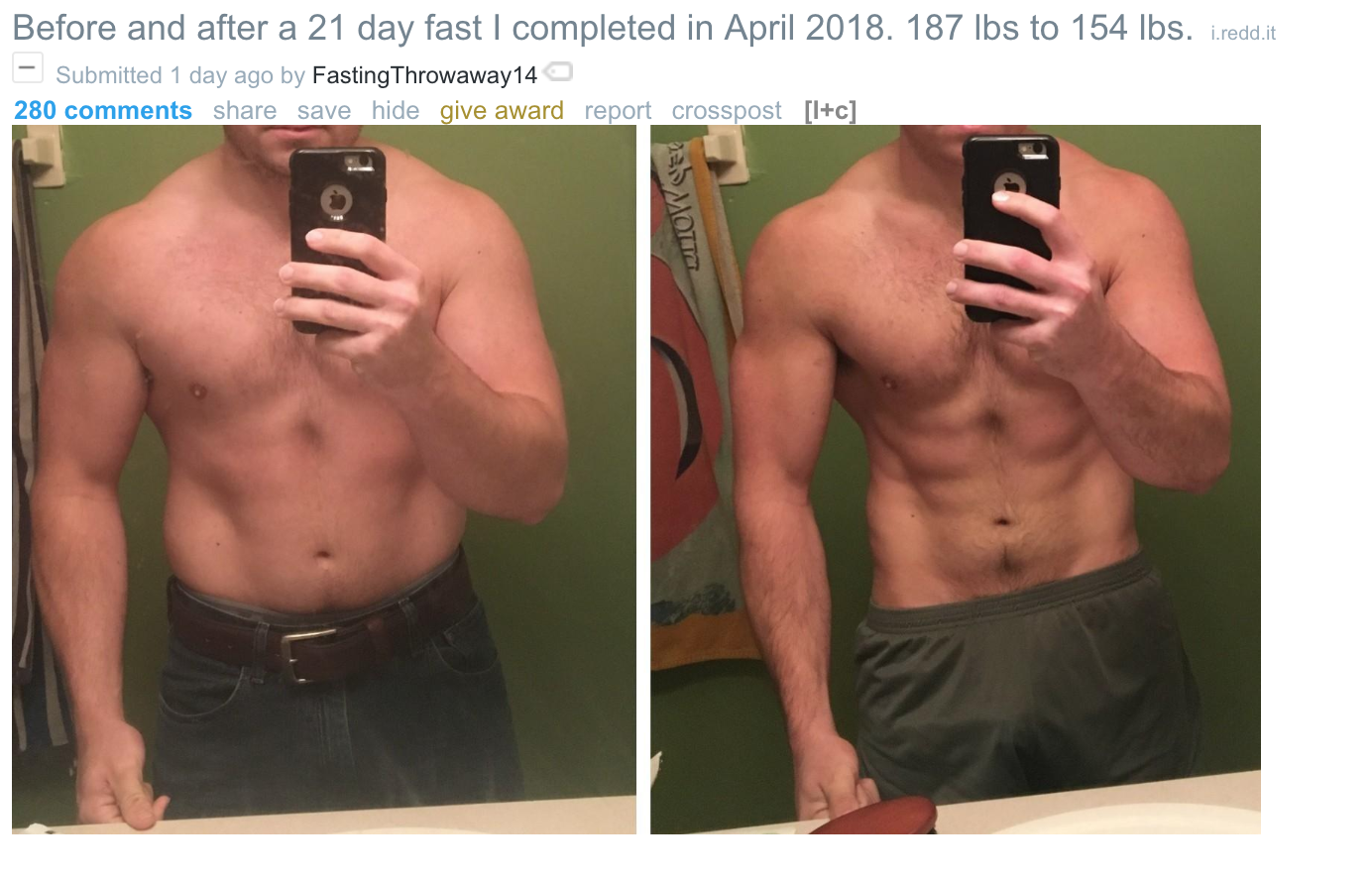 The reason, Kantor explains, is that your body is burning its own fat storages for energy rather than burning food for energy. “Fasting trains the body to use its own fat stores for fuel rather than depending on glucose from food to fuel the body and brain,” he says. “The scientific metabolic answer is ‘autophagy’ — our body’s natural process of self-cleaning. Autophagy destroys old cells that are diseased, dead or worn and it creates new healthy cells.”

The cons? Fasters, especially those with “insulin resistance” (basically, conditions that are often a precursor to diabetes), “may need to ease their way into this lifestyle and monitor their glucose levels throughout their fast to ensure they are not dropping too low, which can strain the heart, cause lightheadedness, fainting and lead to hospitalization,” Kantor says. “Fasting is NOT recommended for those who have an eating disorder or are in eating disorder recovery.” Fasters also risk dehydration, heartburn, increased stress and sleep disruption, according to the U.K.’s National Health Service.

Kyle says he had other concerns: “My experience with fasting can be summed up in a simple sentence: ‘Never trust a fart.’”

On a longer fast, three or more days, you’re going to feel like shit unless you give your body at least some of what it needs. I take an electrolyte supplement, a multivitamin, and a mineral supplement every day, and I seem to do pretty well with minimal side effects. At no point do I feel weak, lightheaded, or malnourished.

Although there is one brutal side effect… You would think the not eating would mean not shitting. You’d be wrong. Days one and two, you’re probably still just getting rid of the food in your system. Days four and five, your bowels have waged war on your clothing, your bed, your furniture, and any relationships you may have.

These aren’t normal “Hey I’ll need to go to the bathroom in a few minutes” solid shits either. These aren’t even “I’ve got the flu and I can’t leave the toilet” shits. At least then you’d be prepared for what’s to come.

No, these are the guerrilla warfare of shits. They disguise themselves as farts if they are even kind enough to warn you at all. Dark liquid monstrosities that pride themselves on taking you from zero to wardrobe change in the space of a YouTube add. They come at all hours of the day and night. They don’t care where you are or who you’re with, and Calvin Klein help you if you sneeze.

Justin, 38, another faster, says there can be social problems too: “Being the one person not eating at a dinner table is like being the guy with a mohawk covered in facial tattoos at a Mormon church or something lol.” He doesn’t mind sipping on fluids while his friends chow down. “When my friends or family invite me to dinner, I sit with them and drink water. I’m one of the weird ones who isn’t bothered by watching others eat. I actually kind of like it. In a strange way, it’s as if I can eat vicariously. They seem empathetic.”

He watches his levels carefully during a fast. “For the longer fasts,” he says, “I do simple blood tests using lipid panels you can get at any clinic to measure glucose, cholesterol, triglycerides, etc. Basic stuff. That way, I can know how much the foods I eat contribute to my levels. My main concern is heart disease.”

Chan complements his fasts with a ketogenic (“keto”) diet, both of which force the body to burn fat reserves instead of carbohydrates. “[It’s] a shortcut to the highest forms of ketosis as well as autophagy and a reset of insulin resistance,” he says. “I do ketogenic diets when I’m not fasting, but I still keep things simple. It saves money and time. I don’t use urine tests, ketone powders or three-hour recipes… it just seems impractical. To me it’s nothing more but feeding a parasitic market that seems to have developed out of the ketogenic-diet craze.”

Madelyn Fernstrom, Ph.D., of the University of Pittsburgh Medical Center’s Weight Loss Management Center, tells Medical News Today that fasting might not be the best option for long-term weight loss. “The appeal is that [fasting] is quick, but it is quick fluid loss, not substantial weight loss. If it’s easy off, it will come back quickly — as soon as you start eating normally again.”

But the fasters all say they’ve developed healthier long-term habits. The guys I spoke to say they fast to break free from the routine of eating three meals a day.

“I fast for liberation,” Chan says.

“We absolutely need food to live, we have a near addiction to the idea that we need three meals a day, every day, or we’ll die,” Kyle says. “Fasting gets rid of that. It gives you absolute control over your diet.”

Bob Bateman, 40, a Utahan who fasts for four days at a time, says he learned to separate which food cravings were real: “There’s this mental thing for me that happens … where I started realizing how much I used to think about food. And knowing I’m not going to eat that day, I realize that a lot of those thoughts have nothing to do with me actually needing food at the moment, it’s just more of a habit. And don’t get me wrong, I love food. When I eat, I eat well, but realizing that it’s a choice and not a need to fulfill this craving has been kind of zen-like. I’m 48 hours in, and I almost feel more energized. I woke up this morning, haven’t eaten since dinner Saturday, and I was good to go. Right now, I feel great.”

Justin agrees fasting has helped him stick to a diet. “I’ve tried all the diets, but the idea of simply not eating never even occurred to me. Not stopping is what also causes me to fail and binge. I’ll get over confident and be like, What’s the harm in a small bite?, and the next thing I know, I’m waking up in an alley, covered in pizza boxes with my pants around my ankles (not really, but you get the idea).”

To be sure, there’s a hump to get over. Kyle’s first extended fast “was three days and it wasn’t easy. By the third day I was hangry as fuck, nearly shitting my pants on the regular, and ready to eat anything that was slower than me (lookin’ at you, Hot Pockets). By the start of day three I was convinced that fasting wasn’t for me, but by the next day I was planning my next fast.

“In only three days, I had gone from constantly craving garbage, to craving greens, fruit, complex carbs and generally healthy food. No fight, no willpower, just going down on a salad like it was nachos on a plate of hundred-dollar bills, served in Jennifer Lawrence’s crotch. It was a religious experience.”