Not much is known about inventor Mark Pringle, like when he was born, or when he died, or whether or not he had a fantastic handlebar mustache. But what is known is that on March 5, 1937, a patent was filed with his name on it entitled “Method and Apparatus for Processing Potatoes.” In the explanation for its purpose, the patent explains, “Potato chip products now available are markedly non-uniform in size, shape, crispness and in other properties. Moreover, potato chips made according to known methods are exceedingly difficult to keep crisp and whole.” The patent then went on to describe a new means of creating uniform chips and a new way of packaging them.

Despite this, Mark Pringle is not the namesake for Pringles, or at least, not officially. Supposedly the name either came from the Cincinnati telephone book, or “Pringle Drive” in Cincinnati, where several people lived who worked for the Pringles parent company, Procter & Gamble. Now, those explanations might be true, or it may just be that no one remembers where the name came from, but it’s hard to believe that Pringles aren’t actually named for Mark Pringle, as Pringles solve all the potato chip problems that Pringle cited in his patent. Plus, Mark Pringle’s patent was cited in the original patent for Pringles from Procter & Gamble.

But while the Mark Pringle patent was more about uniform cutting, the Pringles chips patent, filed in 1969, went about making uniform chips entirely differently. Then and now, Pringles are made by creating a dough from potato flakes, rice, wheat and corn, and they’re fried entirely differently than traditional chips. The shape of Pringles, which is key to their success, was developed by chemist Fred Baur. Perfecting the taste of Pringles was done by researcher Alexander Liepa and the machine used to cook them was developed by machinist and famous sci-fi author Gene Wolfe.

This holy trinity developed something entirely new in the field of snack foods — so different, in fact, that Procter & Gamble were later told that they couldn’t call them chips at all due to objections from other chip companies, so they renamed them “crisps” instead. Years later, British courts would make a similar ruling, saying that Pringles couldn’t be called crisps in the U.K., because that’s their word for chips.

Whatever they are, Pringles couldn’t have become a success without their innovative packaging, which was created by the same guy who developed the shape of the chips, Fred Baur. The lightweight can of metal and cardboard is key to preserving those perfectly uniform chips, and — perhaps even more so than the chips they contain — the can has become an enduring part of the pop-culture landscape in the decades since it debuted in 1968.

But before all that happened, people had to actually eat the chips first, which did present a bit of a challenge. Pringles stayed fresh longer than most chips, and their can made them easier to ship nationwide, but being the lone can in the chip aisle made them seem out of place. Not only that, but people were essentially given a solution to a problem they didn’t know they had: Most were fine with the broken, irregular nature of potato chips, so to get them to understand what a breakthrough product Pringles were, Procter & Gamble’s original advertisements served as an education in why everyone needed Pringles.

Pringles Newfangled Potato Chips, as they were originally called, didn’t really catch on until the late 1970s, but by the 1980s — when a young Brad Pitt starred in one of their commercials — they were available nationwide and becoming competitive in the already crowded potato chip market. It would be the 1990s, though, that seemed to be the first true Pringles decade, one where they could be found in the background of big shows like Friends and Seinfeld. The Pringles can itself would also have a memorable scene in 1994’s Clerks, with Dante helping a poor customer who got his hand caught in a Pringles can (a problem which is still very relatable).

The new millennium would bring about even more Pringles appearances: King Kong, Stranger Things, Ghostbusters, Mr. Robot, an appearance on The Simpsons when Homer dreams up a conversation between himself and the mustachioed Pringles mascot, the chips — sorry, crisps — were everywhere. They’ve also been making waves recently with a series of commercials starring Rick and Morty.

The popularity of the Pringles can has even become an object of nostalgia and a collector’s item to some. For example, there’s Cyroz Portucela in the Philippines, who has 229 Pringles cans, and Juraj Matleković from Croatia, who has 240 cans. These guys, however, still have a long way to go to catch up to Louis in Germany, who tells me he has about 400 Pringles cans, and Vytautas Balnionis from Sweden, who has more than 800 cans from countries all over the world.

Each of these Pringles can collectors says that their fandom is based not only on the wide variety of limited edition packages that Pringles have made over the years, but also the ingenuity of the can’s design. And while these hardcore collectors would likely shudder at all the ways Pringles cans are carved up, its versatility is another reason why the Pringles can has become such a popular product. For example, speech and language therapist Lisa Quimby tells me that she’s used Pringles cans with a number of crafty projects with the children she teaches, and tabletop gamer Jo Levin explains that many gamers use Pringles cans as a way to make a dice tower. You can also find videos on YouTube that teach you how to make one into a bong, or a solar hot dog oven.

Given its usefulness, universality and uniqueness, it’s not surprising that in our current era, the Pringles can has become strong meme fodder. Some of these memes comment on the can’s multifaceted nature, extending all the way into it being useful as a homemade Fleshlight. Others celebrate Pringles as the noblest of potato chip companies, since it’s the only one not selling a mostly empty bag.

Perhaps the most popular Pringles memes, though, relate again to the shared experience of getting one’s hand stuck in one. Sometimes this is given a sexual twist; other times they seek to jokingly solve a problem that Kevin Smith pointed out almost 30 years ago: Why the fuck are they just too small to fit our hands in? 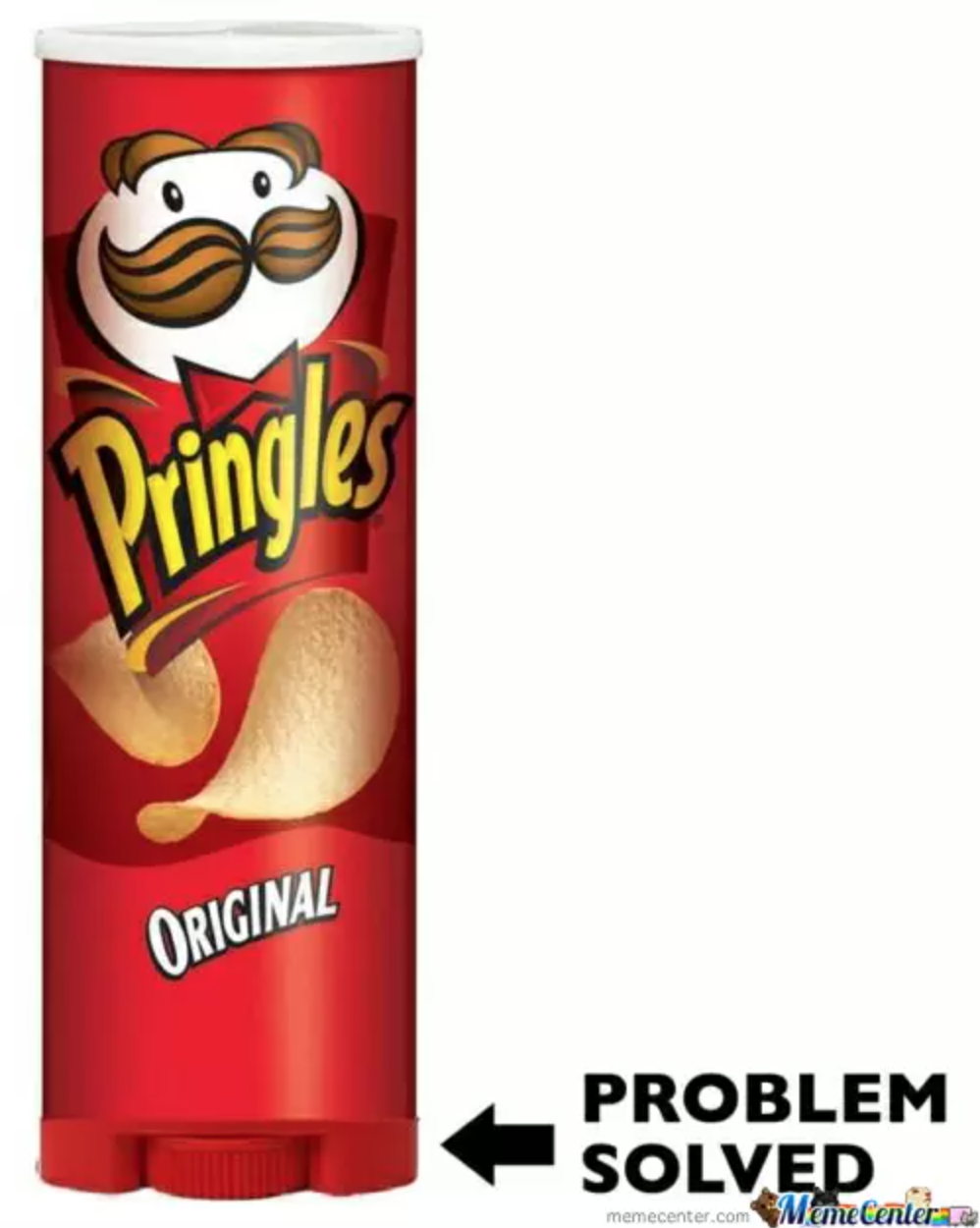 Pringles is no doubt aware of the problem, but they don’t consider it to be all that serious, as they recently answered this query on Twitter:

I was originally annoyed at the glibness of this response, as I too have had my hand stuck in a Pringles can, and I’ve gotten crumbs all over myself in a later attempt not to get my hand stuck. But upon further thought, I’ve decided that maybe Pringles is right. Just consider this: If Pringles did make the can a little bigger, the chips would be more likely to break in there, and if they then increased chip size accordingly, the chips might be too big for our mouths. Additionally, Pringles would have to change up all of the machines in their factories. Maybe, just maybe, making the can a teensy bit bigger would cause the whole Pringles empire to crumble, much like those Pringles scraps at the bottom of one of their iconic cans.

Furthermore, maybe we’re just expecting too much of a Pringles can. You can already make it into a thousand different things, and the guy who created the can — Fred Baur — was so proud of his invention that he even had his ashes buried in one (really). So do we really need to fix a problem that, let’s be honest, isn’t even that bad?