The Reefer Madness of Joe Biden

Way back in 2005, The Onion ran one of their man-on-the-street interview gags on the subject of the FBI relaxing their standards for prospective agents’ past use of marijuana. The first answer, impeccably dry, has stuck with me ever since: “I think it’s a good change. The FBI should be open to considering applicants who attended college at some point in their past.” 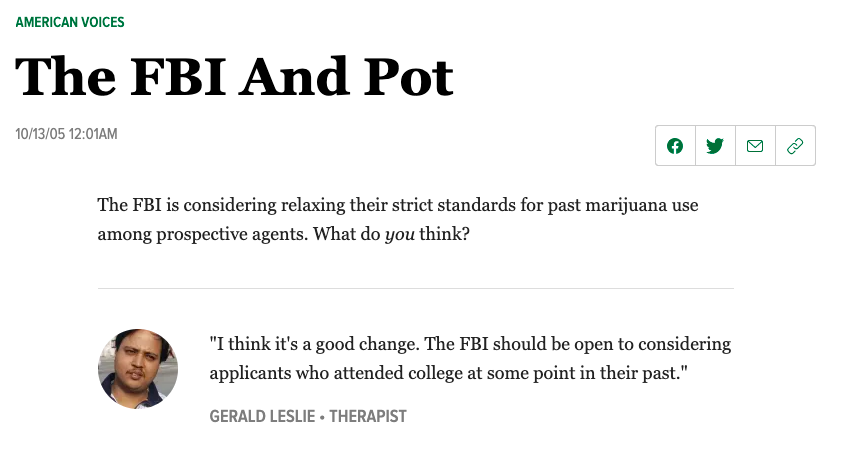 That was almost 16 years ago. This week, news broke that President Biden’s administration had fired five staffers and sidelined “dozens” who had divulged prior cannabis use in background checks — despite assurances that such an admission would not be disqualifying. Even for Biden, a guy who peddled bogus “gateway drug” theory on the campaign trail as he promised not to legalize the devil’s lettuce, this is asinine policy, rooted in some completely archaic view of pot smokers as unreliable, incapable and even morally degenerate. Really, really dumb shit.

Why can’t Joe shake this reefer madness? Whatever his personal grudge against ganja, he could at least be bothered to read the writing on the wall: Cannabis isn’t the counterculture anymore, it’s a multibillion-dollar industry. State by state, it’s becoming more available, not just as medicine but for recreational use. Biden doesn’t drink, but I doubt if the thought of dismissing employees who unwind with an evening cocktail — or go on a weekend binge now and then — has ever crossed his mind. And if someone claims on a job application that they’ve never tried weed, there is a very good chance they’re lying. Are we really promoting deceptive careerists over honest stoners? Because I know which group is more trustworthy.

The optics are terrible, too. This little gotcha tells us that the Biden White House is run with the capricious ethics of your own worst boss, the one who always changed the rules without telling you, misrepresented his positions and found sneaky, sleazy pretexts for giving workers the boot, then hired less qualified people at lower pay — leaving you to pick up the slack. Millions of Americans can identify with the indignity of losing your job over a total non-issue, thanks to the whim of a manager with stodgy or impractical ideas about what his workforce should be. Why, exactly, is it a problem if some low-level aide in the West Wing has an eighth and rolling papers at home? Does this weaken us in the eyes of the world? Didn’t Kamala Harris puff and pass?

Nobody thought Biden would be a champion for legalization — only that he might not stand in the way of regional progress on the matter. But if he’s that worried over the influence of THC in American life, a zero-tolerance standard for his office is a weird, counterproductive place to start. Ensuring that marijuana isn’t marketed to or accessible for children, figuring out how to stop people from driving high and regulating the product to keep consumers safe and informed are all better directives to focus on (and areas where the staffers with direct cannabis experience would’ve helped).

To round up and dismiss the supposed pot gang after telling them not to sweat it hints instead at the hysteria of the new war on weed, promoted by the likes of Malcolm Gladwell and other contrarian pinheads, which declares that habitual users are doing themselves serious mental and physical damage. The leading author of this theory, of course, became a rabid COVID-19 truther and is posting anti-vaxxer junk on Twitter as I type this.

In short, the move helps nobody and serves as a depressing reminder that Washington is dangerously out-of-touch with both the electorate and the present moment. A party this eager to cast out its potential bong owners is also the kind that revises its most basic promises after assuming power and struggles to raise the minimum wage when 80 percent of the country is in favor of it. Surely the executive branch of the federal government has enough to do after Trump’s disastrous term without prioritizing a witch hunt of anyone who can articulate the difference between indica and sativa.

Good job kneecapping and alienating a bunch of hard-working nerds on your team who did nothing wrong except have faith in the quality of your leadership. God forbid they smoke a bowl and watch TV after a long day of making you look halfway competent. I guess when you devote decades to the wrong approach on drugs, it’s that much harder to finally quit.