Why Pizza-Flavored Snack Foods Never Taste Anything Like Pizza

From Combos to Pringles to Keebler’s defunct Pizzarias chips — why can’t anyone get this right?

Samuel Stillman Pierce was a Boston grocer from the 1800s who made a name for himself by getting some of the most sought-after goods from around the world. He also had a number of high-profile customers — like former President John Quincy Adams — which further helped to enhance his reputation, even long after his death in 1881 (or 1880, depending upon where you look). Pierce was something of an innovator in his own time, but the S.S. Pierce food company continued to make advances after his death, and in 1957, they released what might have been the first ever pizza-flavored snack food.

All I know about S.S. Pierce’s Pizza Corn Chips is that they sold for 59 cents in a five-and-a-quarter ounce jar. Aside from that, there’s not much to go on: I don’t know what they looked like or what the ingredients were and I can’t find a single ad for them after 1957, which tells me that they likely weren’t a big hit. That said, there is one detail about them that I’m pretty damn sure about: They probably didn’t taste like pizza.

I say this because over 60 years later, food companies still haven’t cracked the code for pizza flavoring. Don’t get me wrong, pizza-flavored stuff tastes fine most of the time, but they never quite have that magical  “pizza” flavor. Pizza-flavored Pringles, for example, taste salty and cheesy, but the tomato part of it seems to have more of a ketchup quality. Pizza-flavored Combos — with their delightful mystery paste in the middle — have the sauce taste a bit more on-point, but the cheese has hints of a Velveeta-like fakeness.

The same was true nearly 30 years ago, when I would regularly consume two pizza-flavored snacks in my childhood. The first of these was Keebler’s Pizzarias, which were chips made from actual pizza dough that were covered in a Cheetos-like red powder. These chips were absolutely delicious, and they still have a following online, including a Facebook group which is solely dedicated to their return. Despite this — and the fact that an elf boasts that it “tastes like real pizza” in the commercial — they did not taste like pizza (I remember this quite clearly).

The second of my nostalgic pizza snacks was Ralston’s Teenage Mutant Ninja Turtles Pizza-Crunchabungas, a corn snack that was kind of like a savory version of Honey Comb cereal. Because they were associated with the Turtles, I of course was going to eat them enthusiastically, but I clearly remember them tasting even less like pizza than the Keebler chips did (though I do think that “Crunchabunga” is one of the greatest names for a food ever). 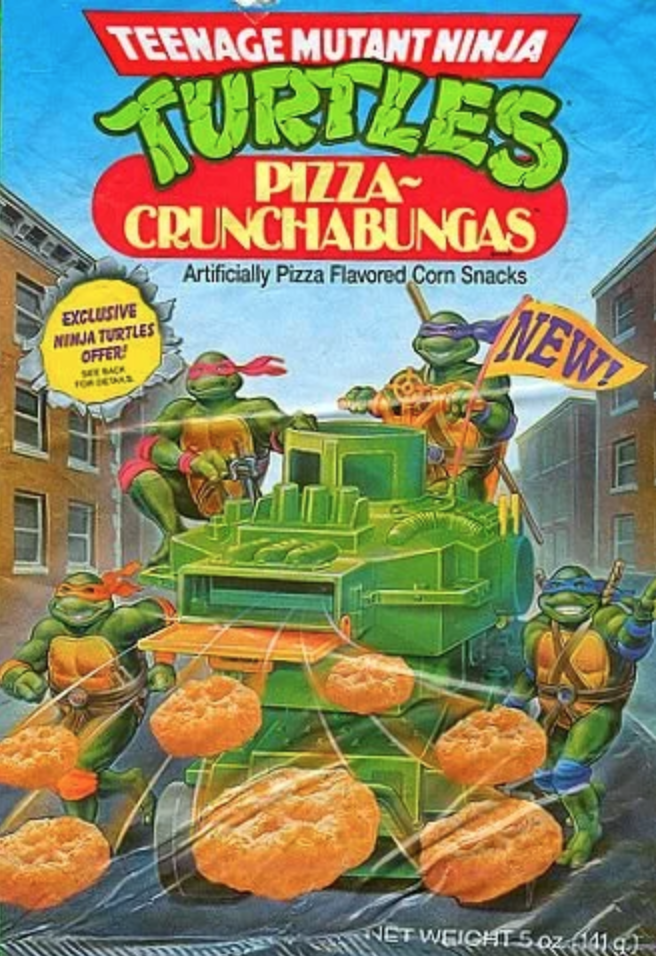 So why is it that, over several generations, no one can master the flavor of pizza? Nutrition science professor Cordelia Running, who is part of the lab group SPIT Lab, tells me that much of the reason why pizza is hard to capture comes down to texture: “Pizza is complex — it’s not one aroma and it’s not even one food. It’s a composite and it’s hard to convey all of those pieces.” There’s the gooeyness of the cheese, the crunch of the crust and the smoothness of the sauce, and that’s without any toppings, so the idea that you can find a powder that can convey all of that is a tall order, especially since the snack has to be dry and served at room temperature.

Running also explains that the relationship between texture and flavor is a bit of a controversial subject, scientifically speaking. “This is actually a debate amongst people in my field. Believe it or not, we have arguments about this,” Running says. “Some think  that texture is integral to how our brains define flavor. Like, for example, a soggy potato chip, is that still a potato chip? Does it count as the same flavor when the texture is wrong? We may debate it ourselves, but from a consumer level, a soggy potato chip isn’t going to measure up.”

When it comes to pizza-flavored stuff, even if the flavoring is enjoyable, it’s still not going to convey the experience of eating a slice of pizza, so our brains are going to process those flavors differently.

Much to my surprise, the basic ingredients that make up most pizza flavorings are what you’d hope they’d be — tomato and cheese. For example, though the back of a Pizza Pringles can has lots of ingredients, there is indeed “tomato powder” and “cheddar cheese” in the “Contains 2% or Less” section, as well as onion and garlic. And while less than two percent of this stuff may not seem like much, Running says that when it comes to flavoring, a little bit goes a long way.

I was also able to track down the back of a Crunchabungas label, and was encouraged to find romano cheese and tomato among the ingredients. But even though these snacks boast (a few) recognizable ingredients, Running says that if you were to visit the factory, you may not recognize them as cheese and tomato sauce.

In the old commercial for Crunchabungas, Leonardo is seen slicing up a pizza with his katanas, following which the pieces fly into the snack bag, but — and I hate to break this to you — this is sadly not an accurate depiction of how these pizza snacks would have been made. Instead, the sauce and cheese would have been dried and powdered, then stuck to the corn snack with maltodextrin or a similar ingredient, which Running tells me helped to preserve the flavoring and make it “stick” to the chip. Even for Combos, which are flavored with that pasty substance on the inside, Running says the ingredients are probably not going to look much like the cheese and sauce you’d see at your corner pizzeria, as they’d still be heavily processed before being inserted into the pretzel.

Another factor in the flavor of these snacks is going to be how they’re delivered. While there’s other weird shit out there — like pizza-flavored chicken nuggets — usually it’s corn chips or potato chips (Combos, however, use a pretzel). In each of these cases, the type of snack is going to affect how the pizza flavoring tastes. Not only that, but Running says there’s the matter of expectation, too. When we’re craving Pringles, we want that Pringles taste too, not just whatever flavor it is, which is why pizza-flavored Pringles still taste more like Pringles than they do anything else. Even the Pizzarias, which were made on real pizza dough, used paper-thin dried dough served at room temperature, so though they may have come closer to tasting like pizza — as some Pizzaria die-hards still claim today — there would still be a long way to go before it could mimic the overall pizza experience.

And, to get a bit philosophical about it, maybe it should be like that. After all, pizza is just about the most perfect food there is — it’s no wonder that the pleasure of eating it can’t be captured by a pretzel or a corn chip. Maybe that’s why S.S. Pierce, the Keebler Elves and, yes, even the Heroes in a Half Shell, could never quite rise to the challenge.