The King of Vasectomy Reversals Has Helped Bring 3,000 Babies Into the World

Dr. Philip Werthman is just the guy to put you back together again

What have I gotten myself into?, Sean Daniels wondered shortly after getting married. His wife, he soon learned, was bipolar, unstable and abusive. The 23-year-old Oklahoman was very religious, though, and considered divorce to be an unforgivable sin, so he vowed to make the relationship work. But he also vowed not to have kids with her, figuring children would only make matters worse. And so, three months after getting married, he got a vasectomy. Seven years later, Daniels’ wife kicked him out of the house and filed for divorce. (She then killed herself, which is why he asked we not use his real name.)

“I packed everything I could fit in my Camaro and started a new life in California,” the now 43-year-old construction worker tells me. His new life included marrying a “Ukrainian princess” he met abroad. Ten years later, the princess told him she wanted to become a mother queen. Yet every urologist Daniels met with explained his odds of impregnating her were next to nil, given it had been nearly two decades since his vasectomy. So he read a bunch of books and began researching andrologists, or urologists who focus entirely on male fertility, which some call the male equivalent of a gynecologist. “I was like, Who’s the instructor training the doctors to do vasectomy reversals? Who’s the real specialist?” Daniels recalls. “Everywhere I looked, one name kept coming up: Werthman.”

Dr. Philip Werthman, to be exact, the Brooklyn-born, 54-year-old director of the Center for Male Reproductive Medicine in Beverly Hills. While most urologists’ success rate of vasectomy reversals hover somewhere around 60 percent, provided there’s sperm in the vas deferens (i.e., there isn’t a second blockage), Werthman tells me his success rate is 99 percent. “I won’t say it’s 100,” he concedes, “because with maybe one patient a year we expect to see sperm and don’t, so it takes longer than we would like, but generally, it’s a very, very successful procedure.”

It was a desire to be (pro)creative that led Werthman to a career in male fertility. “Unlike plastic surgery, this was a way of being reconstructive but also help people bring life into the world. The surgery is technically challenging — it’s one of the smallest things you can operate on — and the result was beautiful: offering men a second chance at fatherhood.”

His motto? “Make the impossible possible.” 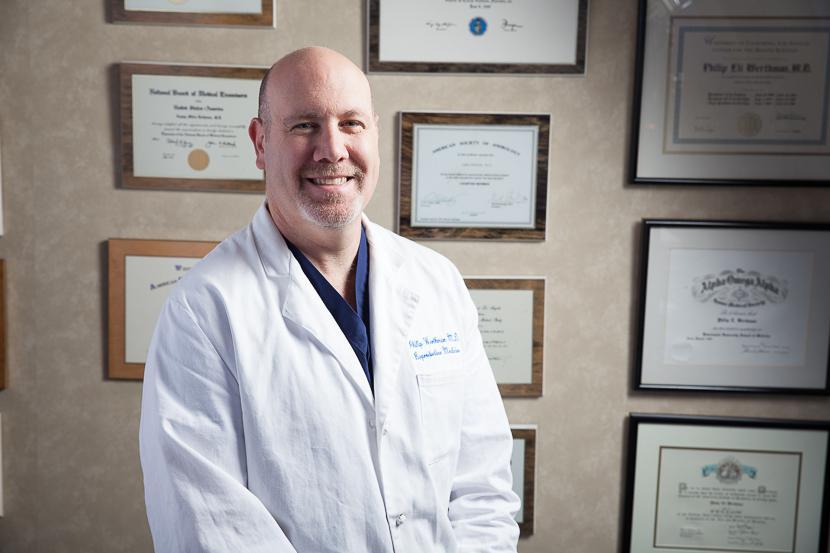 As for Daniels, “I needed to see if this guy was full of shit. I mean, we’re talking about my fucking balls here, right?”

Werthman explained to him that a vasectomy reversal is a relatively painless, low-risk procedure when performed by the right surgeon. Sperm are produced inside the testicle and exit via the vas deferens, a thick muscular tube with an inner channel about the size of a pen dot. While a vasectomy blocks the vas deferens and flow of sperm, Werthman noted, a vasectomy reversal reconnects the cut ends using micro sutures half the thickness of a hair, restoring the flow of sperm.

As Werthman continued to describe the procedure, something caught Daniels’ eye. “There was a fucking Commander’s Coin on the bookshelf!” he excitedly remembers, referring to a small medallion presented by U.S. generals in recognition of special achievement. “I used to work as a contractor at Tinker Air Force Base. If you did a good job — I mean, a really good job — they’d give you one of these coins. It was the first time I’d ever seen a doctor have one, though. It was exceptional, and it meant he pulled off something really special. It was all I needed to see. I said, ‘Alright doc, let’s do this.’”

When I visit Werthman’s office, I find a variety of such coins on display. “I’m not sure which one he was specifically referring to,” Werthman says. “I take care of a large number of law enforcement, firefighters and military personnel. I believe he saw this LAPD coin, which I received from an officer I helped conceive a child after a successful vasectomy reversal.” 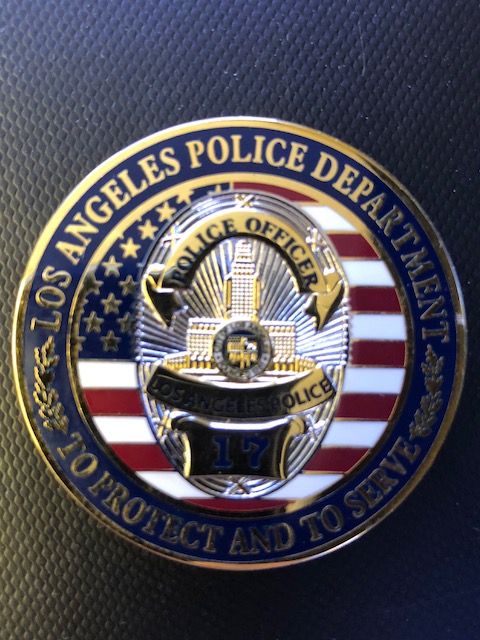 Werthman’s connection to vasectomy reversal can be directly traced back to the first one ever performed, by Australian microsurgeon Earl Owen in 1971. Five years later, Owen brought his pioneering procedure to the U.S., sharing it with Werthman’s mentor, Cappy Rothman, the first male infertility specialist in L.A. who became known as the “King of Sperm” after starting the California Cryobank, the largest sperm banks in the country. Microsurgery — that is, surgery performed with miniaturized instruments and a microscope — was brand new at that time, Rothman explains. So new, in fact, that there were no instruments for urologists to use. “I had to borrow microsurgical gear from ophthalmology and ENT departments,” the retired 80-year-old tells me.

More importantly, aside from Owen in Australia, no one was teaching urological microsurgery. So Rothman taught himself. “I’d buy a rat at the pet shop, bring it to the operating room and give it knock on the head to make it unconscious. Which is obviously forbidden now, but it was the only way to practice on a viable organism. It was quite an exciting subspecialty.”

In the late 1990s, Rothman was ready to retire and sought a young associate to succeed him. As one of the few urologists in the world to have completed an intensive microsurgical fellowship specializing in vasectomy reversal, Werthman was an ideal candidate. “When Phil came here, he watched me and I would stand over his shoulder, tutoring him,” Rothman says. “He was an excellent student.”

“We had a little office microscope and Dr. Rothman set up a bunch of tiny silicone tubes,” Werthman recalls. “He said, ‘Every night, for two hours, you’re going to practice sewing all this stuff back together until you can do it in your sleep.’” More than anything else, though, Werthman credits his professional success to a “Kentucky Fried Chicken” principle of medicine. “We do chicken right,” he explains, “Because that’s the only thing we do. So we have a much broader experience than a urologist who maybe sees one or two fertility patients a month because they’re covering the whole gamut of men’s health.” Compare that to Werthman, who says he’s averaged three reversals a week for the past two decades, or more than 3,000 in all.

The typical vasectomy reversal patient, Werthman says, is a guy like Bill Shaw, an automotive business owner who had three sons in his early 20s followed by a vasectomy at age 28. After a divorce six years later, he remarried Debra, a woman 14 years his junior who asked if he’d be willing to reverse his vasectomy. “I was very open to it,” Shaw tells me. “I love children, and I knew she’d make a great mother.”

Like Daniels, however, most urologists were skeptical about the Shaws’ chances. As Debra explains, “They were like, Wow, that procedure is extremely difficult and has a very low success rate. I don’t think it’s gonna work. When we finally consulted with Dr. Werthman, the first thing I noticed was a wall of baby photos of all the kids resulting from successful reversals. He basically said the exact opposite, explaining that because I was younger and Bill was older, we were the poster children for this procedure and basically guaranteed I’d get pregnant, which I did — twice.”

Microsurgery demands steady hands, which is why Werthman doesn’t drink coffee. (The morning I meet him, his breakfast was a “hunk of cheese” leftover from his wife’s cocktail party the night before.) “I avoid crack whenever possible, too,” he jokes. Clad in scrubs and a simple cardigan, his “everyman” humor combined with a lumbering physique and a dégagéis demeanor eases anxious patients. “I don’t wear a white coat so I can break down barriers of communication,” he explains. “It took my wife and I four years to have kids, so I understand the anxiety surrounding this. I try to be their friend, not their doctor.”

Part of being a friend is correcting their misconceptions about male fertility, which Werthman considers among his greatest challenges. “Nearly half of infertility cases are related to the man in some way,” he explains. “Yet guys still think of fertility as a women’s issue.” Nobody, for example, ever calls a man barren. U.K. sociologist Liz Meerabeau writes that the belief that fertility is a “women’s issue” even prevails within the medical establishment, noting that the female is almost always the first one whose health and bodily function is examined and assessed.

Men, on the other hand, have “a cultural narrative that says kids are fun but optional,” says Paige Lucas-Stannard, a writer and educator at Everyday Feminism. “‘Real men’ are assumed to have aggressive, uber-sperm so potent it makes babies from across the room.” In reality, though, even “real men” have fertility issues. As such, Werthman treats a wide variety of male-factor infertility conditions — ranging from chronic testicular pain to enlarged prostates to sperm-free ejaculate. Nor are procreation woes limited to middle-aged men. “Varicocele, or large varicose veins around the testicles, affects a quarter of men in their teens and 20s,” he explains, adding one in five men in their late teens have a varicocele present on exam.

For all the ignorance and secrecy around male infertility, however, startups are itching to (discreetly) monetize men’s fertility fears. To that end, a flood of devices have entered the so-called SpermTech space, meaning you can now MacGyver your iPhone into an at-home sperm test. “Home sperm tests like Trak and Yo allow men to take fertility into their own hands,” says Florida urologist Jamin Brahmbhatt, adding that yes, the pun is intended. Meanwhile, on January 31st, Dadi, a new men’s health company, is launching dadikit.com, a fertility test and sperm-storage kit discreetly delivered to a dude’s home. Basically, he busts a load in a sealed cup, slaps a pre-paid FedEx label on it and ships it to a secure lab facility where a technician analyzes the deposit. Days later, he’s emailed a personalized fertility health report, including a video of his swimmers.

To hear Daniels tell it, though, his vasectomy reversal was almost simpler. “I thought it was gonna suck,” he says, recalling a nightmare testicular torsion surgery he had at age 15. “That’s where your ball comes loose from your ball sack, and it does a twist. It feels like somebody’s repeatedly kicking you in the balls. My nuts swelled up like a fucking grapefruit and I walked bowlegged for a week.” But there was no such horror from Werthman’s $10,000 handiwork. It lasted only two hours and healed with the help of a Band-Aid.

The only downside? “You can’t hump for like a month,” Daniels says disparagingly. “No sex, no beating off, no wet dreams. That was the worst part of the whole thing.”

That said, it paid off. “Now we have a baby!” Daniels announces with glee. “He’s 11 months old and gorgeous.”