We failed to stop COVID from spreading, but perhaps there’s still time to contain ’za before it truly gets out of control

When nobody was looking, ’za became an acceptable slang word for pizza. I know, I know, it’s hard to believe that anyone would refer to pizza — man’s most perfect food — in such a disrespectful fashion, but I’ve recently discovered that not only do some people still say ’za, but that the use of the word is now disturbingly common, having spread under the radar, much like our current pandemic.

Like so many things in my life, this all started while I was reading a Teenage Mutant Ninja Turtles comic book. To my horror, Leonardo, the leader of the Turtles, referred to pizza as ’za in a 1991 publication. I mean, if I would ever expect anyone to show proper respect to pizza, it would be the Heroes in a Half Shell, but there it was, in print, a mutant turtle calling pizza ’za.

Still, at this point, I had no idea how bad things were. It’s a nearly 30-year-old comic, so I figured it was just a product of its time.

Before I get any further though, I guess I should explain myself a little bit. I don’t like to judge anyone for anything, but I find the word ’za to be just about the most obnoxious, annoying thing imaginable. And, as a guy who has been unofficially dubbed MEL’s “pizza correspondent” by our editor-in-chief, I find the term a near-personal affront. But don’t just take my word for it — here’s renowned pizza chef and James Beard Award winner, Chris Bianco, to back me up: “’Za is right up there with ‘guac’ as my top two personal fingernail-on-chalkboard pet food names. For fuck’s sake, isn’t ‘pizza’ short enough?”

Saturday Night Live even had a recent sketch denouncing the slang word and its usage, noting that it’s pronunciation — “zah” versus “suh” — was completely illogical.

Imagine my horror, then, when I was told by multiple people that they’d heard the term still being used today. I quickly turned to Facebook to get an unscientific survey, asking my friends if they’d ever heard the word ’za or, God forbid, used the word themselves. To my surprise, several people said that they’d heard it and several more said they’ve uttered this abomination themselves.

Some people, like me, were properly horrified by this. “I would NEVER use it myself,” said my friend John. “OMFG,” began Sarah, boldly. “THE FIRST TIME I EVER HEARD THIS ABOMINATION OF A FUCKING WORD WAS WHILE PLAYING MY EX BOYFRIEND IN WORDS WITH FRIENDS. NO ONE USES IT AND IT IS BULLSHIT AND I HATE IT.” Others said they’ve used it mockingly to refer to pizza; still others seemed to take no issue with unironically calling pizza by this truly offensive nickname.

Again, this is unscientific, but from their details, it seemed that ’za was somewhat regional, with most of the people who said they’d heard it encountering it somewhere in the Midwest. A few others, however, associated it with California valley girl and/or surfer dude speech patterns. For me — a guy who has spent most of his life in New York’s Hudson Valley and a few years in Brooklyn — I literally don’t believe I’ve ever heard this word in person, but when I hear it in my head, I hear Southern California, as in “Ya, let’s get some ’za, brah.”

For a more definitive answer, though, I turned to etymologist Barry Popik, who the Wall Street Journal has referred to as “the restless genius of American etymology.” Popik explains that the word dates back to at least the late 1960s, citing slang dictionaries that refer to it as Midwestern college slang from 1966, 1967 and 1968. ’Za is a type of slang called “clipping” where sections of a word are dropped. So, like how refrigerator became “fridge,” pizza became “’za.” Popik says that “clipping was popular in student slang,” and that it may have been “college slang at Illinois or Ohio State.” Popik also says that slang words like this generally spread via a popular influencer. For ’za, he finds no exact originator, but speculates that ’za may have originated from a local pizzeria near either of those colleges.

While Popik’s research confirms my informal Facebook survey linking ’za to the Midwest, I had people insisting it was from California, including my friend Todd, who says he heard it as valley girl slang in the late 1970s. I also found this to be backed up by a Scrabble dictionary, which claims it was California college slang in the 1970s. In reality, both things can be true, either because it started in the Midwest and somehow was brought to California, or it could be that it was born twice in separate locations. For my money, though, I’d go with Popik over Scrabble (I’ll explain why later).

So ’za was born in the 1960s — or perhaps even the 1950s — as college slang, and by the early 1980s, the word began appearing in a ton of Midwestern newspapers that were explaining the slang to the general public. By reporting on ’za, these newspapers likely affected the word twofold: On one hand, ’za became more well-known, which is bad, but they also were undermining its “coolness” by simply reporting on it. As Popik explains, “When [a slang word] reaches print and your grandmother knows what it is, it is already dead.” By dead though, Popik doesn’t mean “gone” — he simply means that it’s no longer “cool.”

Of course, I’d argue that ’za was never acceptable, and the only time it seems to have been “cool” was for a brief moment in the 1980s when the word confused Soviet spies who couldn’t make sense of American college slang. To elaborate: In 1985, the Defense Department reported that Soviet codebreakers had been stumped by the phrase “The rents will pay for the shwench’s ’za.” To translate: “rents” means parents; “swench” grew annoyingly out of “shmen,” which was short for freshman; and, of course, ’za is pizza. 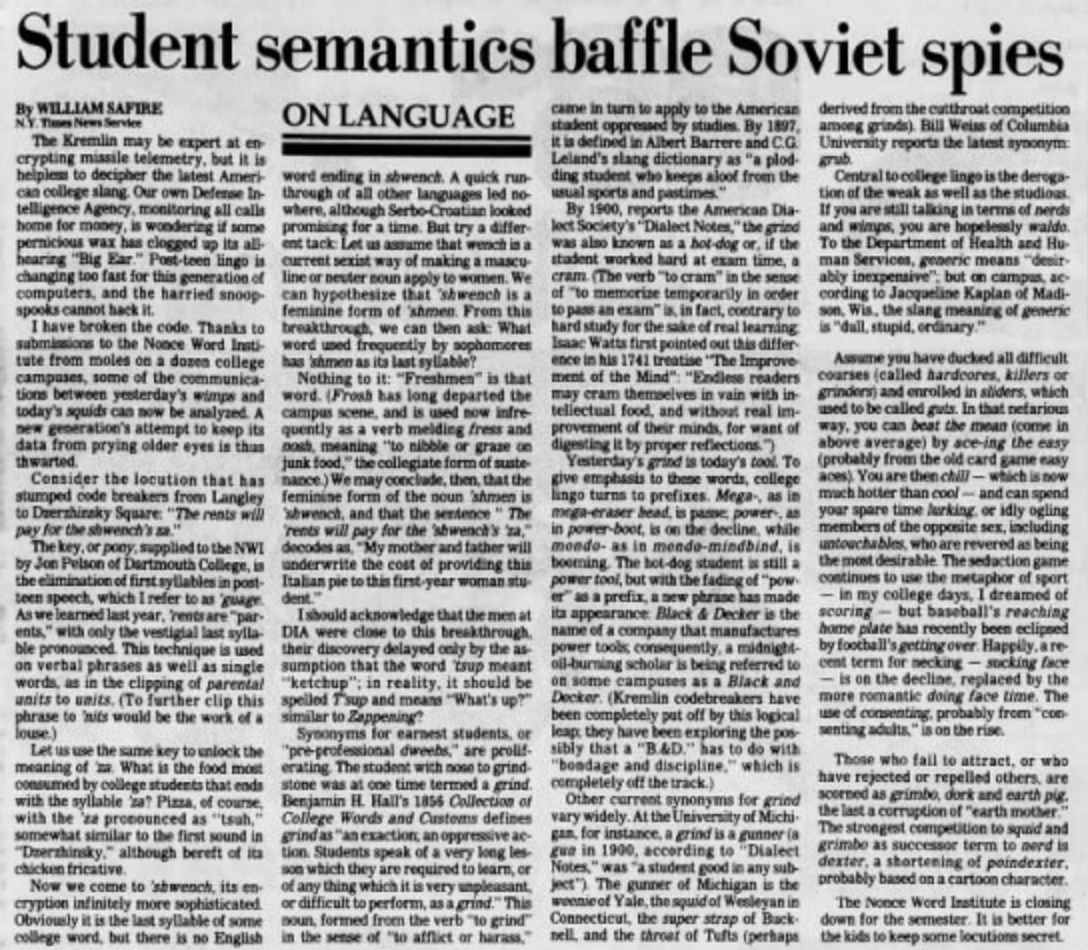 So that was ’za’s only cool moment, and even that was super annoying. In an effort to be objective, however, it seems like ’za was possibly somewhat “cool” through the 1980s — in an episode of The King of Queens, Patton Oswalt’s nerdy character Spence asks Kevin James if he wants to “grab a slice of ’za,” to which James tells him that, “calling pizza ’za stopped being cool in 1982.”

This might be correct — newspapers as late as 1990 were still explaining ’za to the general public, which suggests that the slang may have been, at the very least, not as well-known (and therefore still retained some cachet) until the early 1990s (and that, perhaps, Leonardo even said it when it was still somewhat okay to say). Regardless, ’za would definitely lose its coolness by 1992, when a frozen pizza company named one of its products after the word.

Much like it was on The King of Queens — which aired in 2000 — in the new millennium, ’za became a joke of a word, said by lame TV characters to illustrate their lameness. It was uttered by Michael Scott on The Office and Ben on Parks and Recreation. Stewie also said it on Family Guy when he was trying to act cool. But even though these TV shows were mocking the word ’za, they were unwittingly making the word more commonplace, so much so that ’za began to spread as a common name for pizzerias.

Which pizzeria first named itself after ’za is hard to know. Perhaps it was the same mysterious pizzeria that Popik speculates originated the phrase. The earliest one I could find, though, is Pete’s Za, which was featured in a coupon book in Binghamton, New York in 1983. I can find no further information on Pete’s Za, like when it opened or when it closed or who Pete was and what he was thinking when he gave his pizzeria this name. The restaurant did exist though, I know that much; otherwise, those pizza coupons would have been worthless.

The single most egregious thing to legitimize ’za, though, occurred in the year 2006, when Scrabble added the word to their dictionary, making it an acceptable word to play in the game. While the Scrabble folks might argue that they were just reflecting the changing American tongue, I’d argue that a huge part of the reason ’za is used at all is to cheat at Scrabble (and its rip-off, Words With Friends). I’d even go so far as to say that this board game is largely to blame for the spread of this disease. Seriously, the only other 11-point, two-letter word in Scrabble is qi, which is a totally legitimate alternate spelling of “chi.” ’Za, however, is only used by those without the proper vocabulary to play the game, or by those who can’t handle losing the 10 points on the Z tile.

So now, thanks to those TV shows, pizzerias and morons who shouldn’t be playing Scrabble in the first place, ’za is now a word that is very well known. Given that, I ask Popik when we might be rid of such a word — like, if after a few generations, a slang word like this may cycle out of usage. Unfortunately, Popik tells me that ’za will likely never go away — it may fade in popularity and it definitely isn’t cool anymore, but he says that, at this point, it will never be gone entirely.

Just like COVID, we acted too late to do anything about this. ’Za was allowed to spread, and now we’re stuck with it for the foreseeable future. So, rather than wish it away, we just may have to accept that this is a part of our lives now, and live with the risks and consequences therein.