But that agony inspired ‘Pain and Glory,’ his acclaimed new drama that looks at aging, regret and the physical deterioration that waits for us all

The title of Pedro Almodóvar’s latest film is somewhat misleading. While Pain and Glory may seem to be an indication of the lows and highs that its main character, an aging filmmaker named Salvador (played by frequent collaborator Antonio Banderas), endures while reflecting on his life, the “pain” isn’t simply the emotional kind. Indeed, as we first meet Salvador, he’s submerged in a pool, trying to relieve the back pain that’s crippling him. Now retired because of physical ailments — which also include asthma, tinnitus and a mysterious trouble swallowing — Salvador is wondering whether his contributions to the world really meant anything. His beloved mother (played in flashbacks by another Almodóvar regular, Penélope Cruz) is dead, he has no significant other and his best work seems like ancient history. And perhaps most vexing of all, his body is clearly falling apart on him.

What’s remarkable about Pain and Glory is that it’s that rare film to talk about physical pain — how daily, unrelenting bodily discomfort can slowly destroy a person’s psyche. Older characters in movies are often depicted as saintly or lovable — seldom do we get the sense of the more commonplace aches and pains that take their toll during our so-called golden years. For Salvador, it’s not a question of “toughing it out”: Every day seems to bring with it some new malady that weighs on him. Which is why, out of desperation, he turns to heroin as a way to self-medicate. But it works too well, leaving him addicted — a cruel irony considering that, years earlier, he’d been involved with a man who was probably the love of his life, Federico (Leonardo Sbaraglia), who had driven Salvador away because of his own heroin addiction. Now Salvador’s only companion is the pain. But then, against all odds, Federico comes back into his orbit.

When I had a chance to sit down with Almodóvar recently, I knew our time would be short — only 20 minutes — and that the Spanish writer-director, who recently turned 70, would be speaking through a translator. So I decided to focus on this particular element of Pain and Glory — how people learn to cope with physical pain — and see what transpired, aware that Almodóvar himself suffers from back problems. Was that what inspired him to tell this story of an aging, pain-ridden filmmaker? 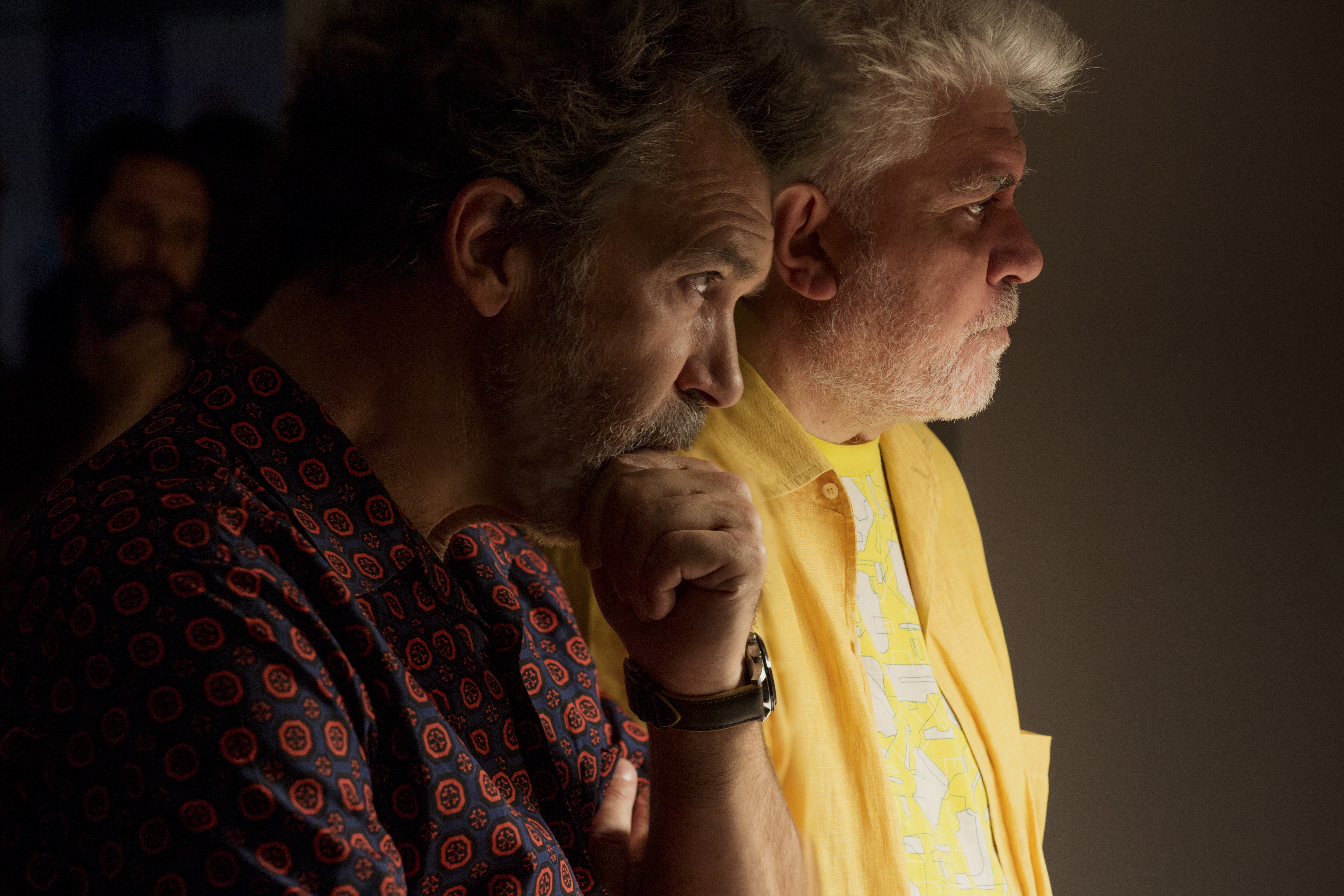 What follows is a condensed, edited version of his free-flowing response to my question. Sometimes, he would speak in halting English, occasionally looking to his translator to make sure he was using the right word or phrase. He then might segue into Spanish, letting the translator clue me in to what he said. But no matter the language, what became obvious quickly is that Salvador is close to his heart, even if he isn’t entirely like Almodóvar. (For one thing, the Oscar-winning filmmaker of All About My Mother and Talk to Her never had a heroin problem.)

Weaving between the past and the present, Pain and Glory allows Almodóvar to look back at his own life and career, from the troublemaking, transgressive early films (like Matador and Law of Desire) to the more gently reflective dramas of recent years. There were times during our chat when he talked about Salvador as if he was really talking about himself — the line between the two men is miniscule. Below, he discusses living with pain, the downside to the freedom he and his countrymen experienced after the end of Francisco Franco’s reign and why he doesn’t want to complain about his bad back.

I have the same kind of back pain [as Salvador]. I had a back operation, and all in all, it lasted about a year, from before the operation to after the operation, where I spent a lot of time laid out because of the pain.

I’d spend a lot of time in a swimming pool, because of the lack of gravity, to help alleviate my pain. That was one of the genesis points for this movie. After a while, I thought about this image of floating, the lack of gravity. Then I asked someone to draw me a picture [of that image] to see if it was cinematic. Once I saw that it was — and that it was mysterious — I started writing about that situation in the swimming pool.

As I was writing, the water of the pool [led me to think about] another water, which is the water of the river of my childhood. I started writing about when I was a little boy: I was three years old, and I remember going with my mother and playing with the fishes while my mother and the neighbors were washing clothes, singing and talking. It was really like a party — it was during the best part of my life. It was a very happy memory, but I’d never written about it. 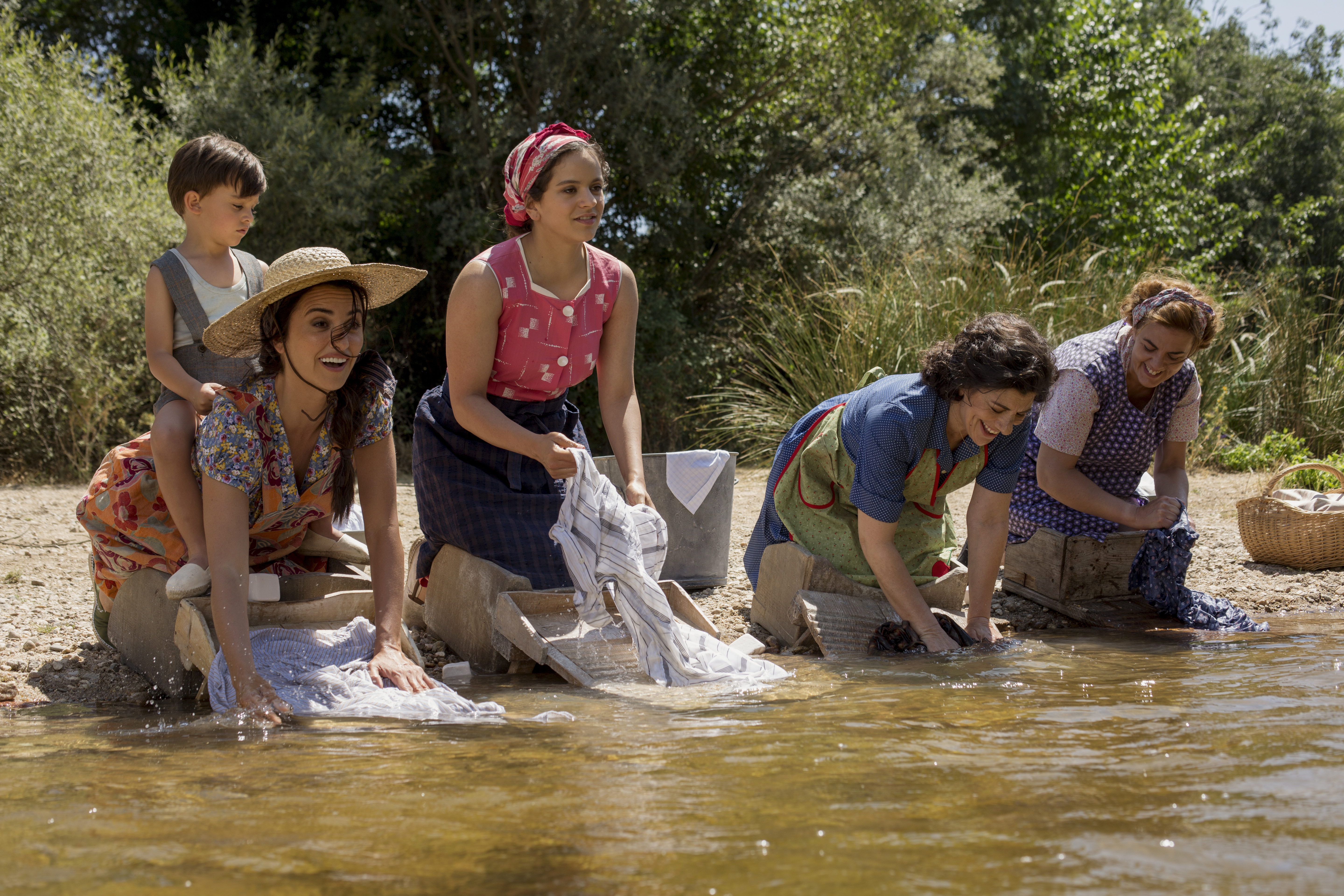 After that memory, I went back to the swimming pool — I went back to the reality, which was painful, dark and pessimistic for Salvador. I made the character into a filmmaker, but in that moment of his life, he’s not filmmaking — he says he’s retired. Once I reached that moment, I hesitated, because, of course, I thought, Well, I’m talking about myself. If I keep going, it will mean making myself the reference for the main character.

I’m very bashful: [I’m in] my movies but behind other characters, not like this. But once I decided that I wanted to keep on writing, I forgot that. I wrote about myself [but] always mixed it with fiction, because it’s the only way to write a script. I was writing about someone who was very close to me. I was alternating between the present and memory. I don’t think I would’ve made the movie if I hadn’t found that back-and-forth, where the character is constantly flooded by memories — not just memories of his childhood but also from the 1980s and the present. I don’t think I would’ve written a story just about a character in pain.

The life that Salvador has lived has been full of excitement, but now he’s at this standstill. He’s not paralyzed, but he’s come to a stop in his life, and those memories are all the things that remind him of who he is today, and why he is who he is today. And so, this was a movie where I wanted to talk about his pain and the things that he suffers and is subjected to. But I didn’t want to make a movie about a character who’s constantly complaining about his pain. Pain is part of everyday life — we all suffer pain, even famous people — but the reason I didn’t want a character who was constantly complaining about it is because there’s people who suffer much greater pain in the world. There’s people who migrate and leave their homes and sometimes die. [As a sign of] respect toward that greater pain, I didn’t want to have a character who just complains.

I associate aging with pain, but the movie is also about the passing of time. There is the period of the 1960s when I was a kid — even at that age, I was very conscious of my sexuality and I, like the character, had to go to seminary school because it was the only way that you could really get an education when you were that poor. It was really important for me to talk about the experience of [Salvador as a boy] — an experience that wasn’t necessarily a painful experience, even though he lived in great poverty. It’s a very precarious state in which to live. 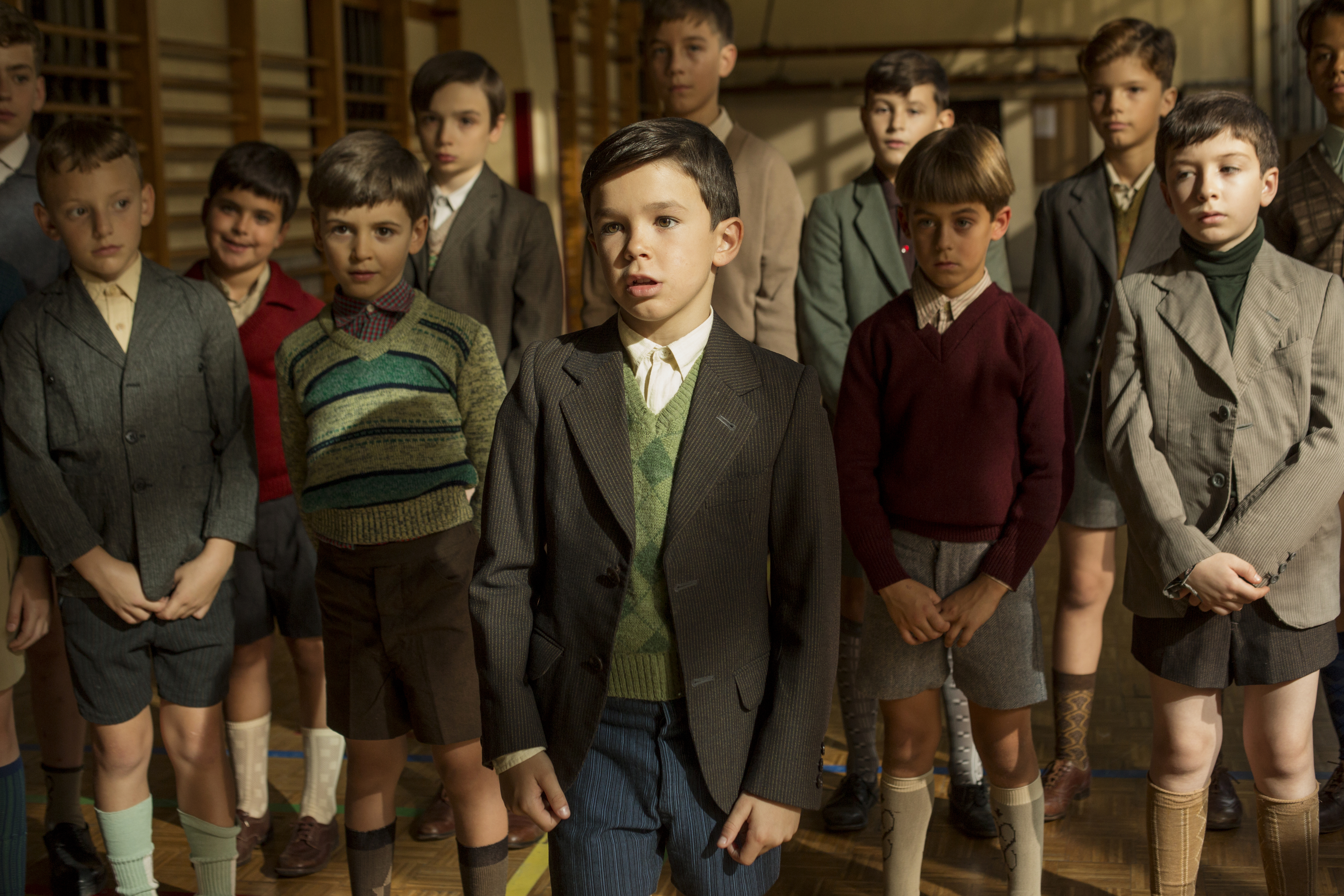 In the 1980s, after Franco, there was an incredible explosion of freedom in Spain, and I was lucky to be young [to experience] that moment. It was a moment that never repeated again in Spain. But the memories that I talk about in the movie about that decade, they were very painful. The use of drugs was part of a way of experiencing the kind of freedom that was finally accessible, but there was also the pain that you underwent [when] deeply in love with someone and then you had to break up because of their addiction to heroin. The 1980s were painful, but it was the result of a lot of freedom.

There is a moment when Salvador feels incapable of making movies because of his physical pain. That’s really the reason why he’s depressed, more than [because of] illness. He says he can’t continue his life without making [films]. His actual addiction is less to drugs than to the necessity to continue to be a storyteller.

I liked the contradiction inherent in the character: He really hated heroin in the 1980s, and then, in his 60s, he’s attracted to it. That contradiction speaks to the way in which we’re all made up of contradictions. He’s going to meet his former lover, something that he was waiting [to have happen] for 32 years. All these things [in Pain and Glory], some of them are part of my life, some of them are not. 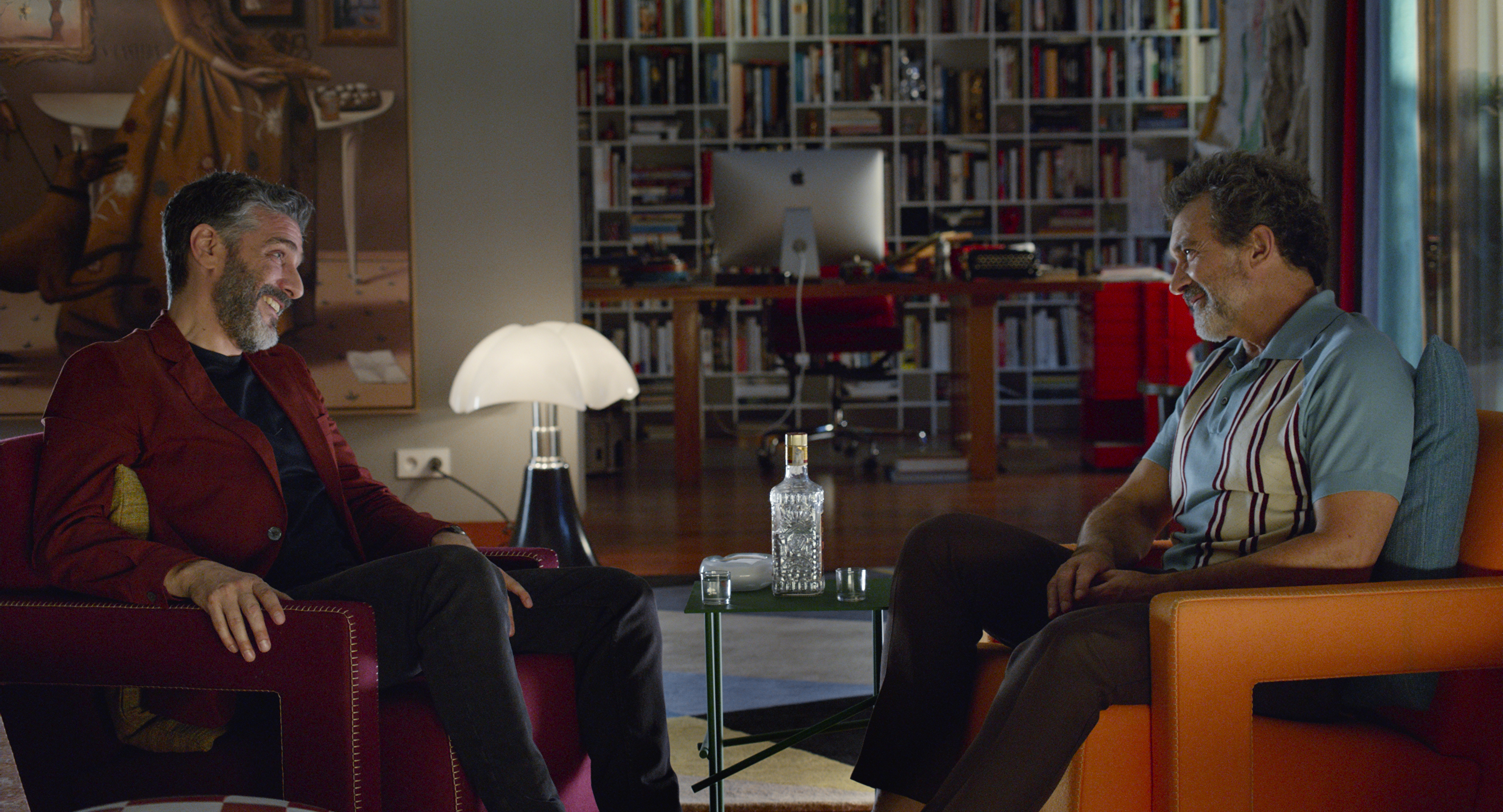 How do I cope with my pain? I [see] physical therapists twice a week. I have to be much more careful physically in my life. I have migraines, which there’s nothing you can do about. The day you have a migraine, you’re just paralyzed.

The best thing you can do for pain is to accept the fact that it’s going to be part of your life. Try not to pay attention to it or bring it front and center, except for the days where you have to take some medication for it. I don’t think I’m an exception in that way. [smiles] In any case, I’m much better [off] than the protagonist of the movie.