While it’s hard to imagine a world where Star Wars merchandise isn’t omnipresent, before the film debuted on May 25, 1977, many companies failed to see the licensing behemoth it would become. Topps, on the other hand, had found success with science-fiction trading cards based on movies like Planet of the Apes, so when Star Wars premiered, they were among the few companies ready with something to offer.

But even Topps couldn’t foresee just how much demand there would be for Star Wars memorabilia, so they quickly began creating more and more series of collectible trading cards, amounting to several hundred in 1977 alone. In Series Four, however, one rather unique image slipped by. It seemed like a perfectly innocent picture of C-3PO; yet upon further examination, it appeared that card number 207 had something else going on.

Was it a prank? Or perhaps a trick of the light? Whatever the case, the image was clear: C-3PO had a gigantic metal erection, making the card a storied collector’s item for decades to come (pun unavoidable). And, even though it’s not to be found in an episode of The Mandalorian or anywhere within the vast Star Wars expanded universe, the image would become a Star Wars legend in its own right. So just what’s really happening with 3PO’s golden rod?

Gary Gerani, author of Star Wars: The Original Topps Trading Card Series, writer, artist, designer and director at Topps from 1973 to present: 1977 was the year that changed everything. That was especially true for me at Topps because I went from zero to hero there, going from a decently-paid copywriter to being in charge of the biggest thing that Topps ever had, Star Wars, which came out of nowhere and changed the world.

A couple of years before, I was put in charge of the movie and TV adaptations. I did just about all of those because I was into film and all that so I claimed that area as my own. Before it came out, Star Wars was a license like any other, and with that, I’d get a copy of the script — this was in the days before such things were protected — and I’d choose images from a library.

Topps was in Brooklyn, but for Star Wars, I would fly to California and go directly to Lucasfilm, which had a little bungalow right across the street from Universal Studios — that’s where all the magic happened for that first movie. Once I was there, it was [Lucasfilm photo editor] Sherry Holstein who gave me the images. I’d go into this small room and go through these books of slides and hold them up to the light and look at them with a magnifying glass and select the images for the cards. Then they’d make copies, which were first generation originals, so they were of excellent quality.

Back in Brooklyn I’d turn in the prints, along with my captions and all of my drawings for what the back and front of the card would look like. From there, I’d sit down with the art department and discuss it with them. We tried to find little ways to distinguish each set so, with Star Wars, it was my idea to put these little flecks of stars in the borders and I drew that spikey blast around the Star Wars text. You got to do a little bit of everything at Topps, so it was a great training ground. 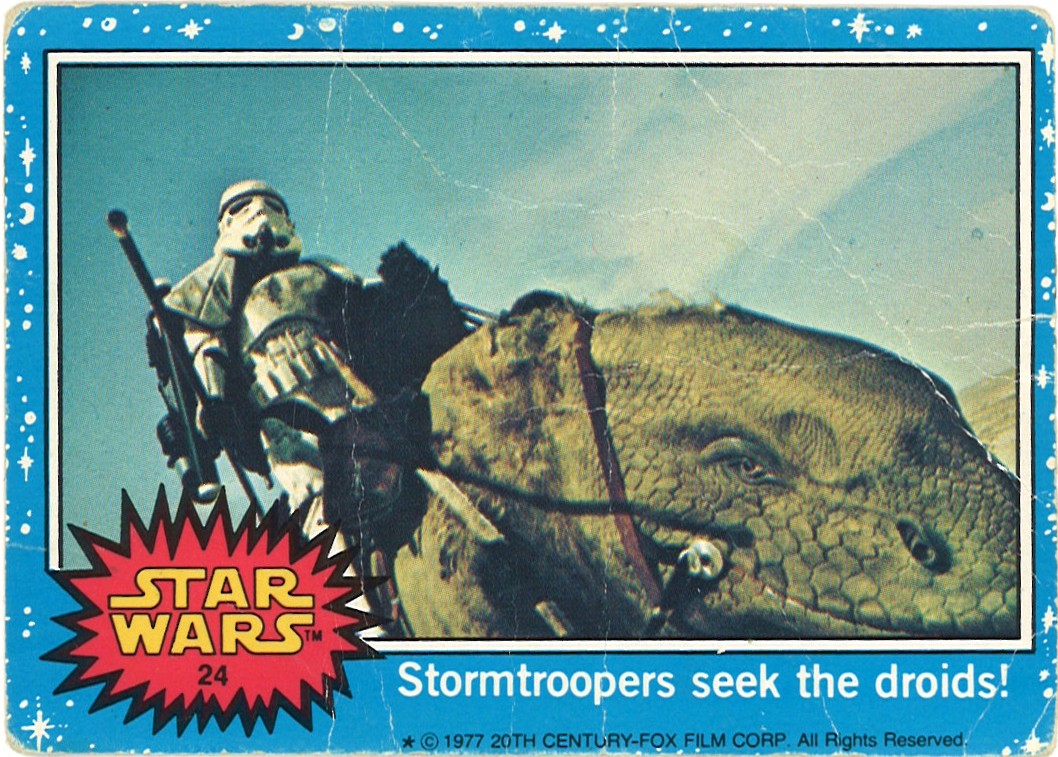 Steven Stolk, Star Wars Topps trading cards collector: I’ve been collecting Star Wars Topps cards since the very beginning. I saw Star Wars on opening day in 1977, and I was so blown away by the movie that I needed something to latch on to. There was no internet then and no VHS tapes or anything like that, so the Topps cards gave us all a way to keep the movie alive in our heads. The action figures came out a little later, and they were very primitive back then. So the cards were really it in a lot of ways. They were a big deal for us.

Gerani: This movie just kept on selling, and we kept doing additional card series. By Series Four, we’d used just about everything. At that point, the images were just fractionally different from what we’d used in the first two series, so the sets were getting really redundant. But they kept selling, so we kept making more.

Every time we made another series, I’d get flown back to California to get more pictures. I went to Lucasfilm and selected the pictures and wrote the captions and did my usual thing, and lo and behold, when we were working on the next series — Series Five — I was off in California again and I get this phone call from Len Brown at Topps saying, “What did you do!? What kind of picture did you give us!?”

I had no idea what he was talking about so I asked, and he said, “Apparently, there’s a picture out there of C-3PO with an erection and we’re getting all kinds of complaints!” Eventually, when I saw the image, I said, “Holy shit, you’re right!” I just hadn’t noticed this weird appendage coming out of him. But, in all fairness, neither did Topps art director Ben Solomon and neither did Lucasfilm, and they gave me the picture! Still, I was the editor, so the buck stopped with me.

Stolk: Topps never recalled the card or addressed it publicly or anything, so my friends and I all found out about it by word of mouth. Most of us had never really noticed it at first, and even once we did, it was still just a normal card to us, so we just kept trading it like the rest. Who knew that years later, it’d be worth over $100 in good condition.

Gerani: When I came back to Brooklyn, I had a meeting with the president of Topps and I walked in there with Len Brown, who was my supervisor and like my big brother. Luckily, with the way things worked at Topps, I’d already had dealings with the president, Arthur Shorin, who was very much the classic businessman with a cigar in his mouth, but also a very down-to-Earth guy. He wasn’t angry, he just wanted to understand what happened, so I explained that I just didn’t notice it and that was really it. It was no big deal.

That’s the way Topps was back then. We were all just guys from the neighborhood in Brooklyn, and when something like this happened, they really stuck by you, they didn’t throw you to the lions. This was no one’s fault really, so it wasn’t a big deal. All Topps did was, in future packs, they just airbrushed out the offending appendage.

Stolk: The reissued version was offered at the very end of 1977 in the last runs of Series Four. The last series, Series Five, came out the next year and once the next series was out, they stopped printing the previous series. So, ironically, the corrected version of the card is more rare than the original. A lot of dedicated fans though, like me, have both in their collection. 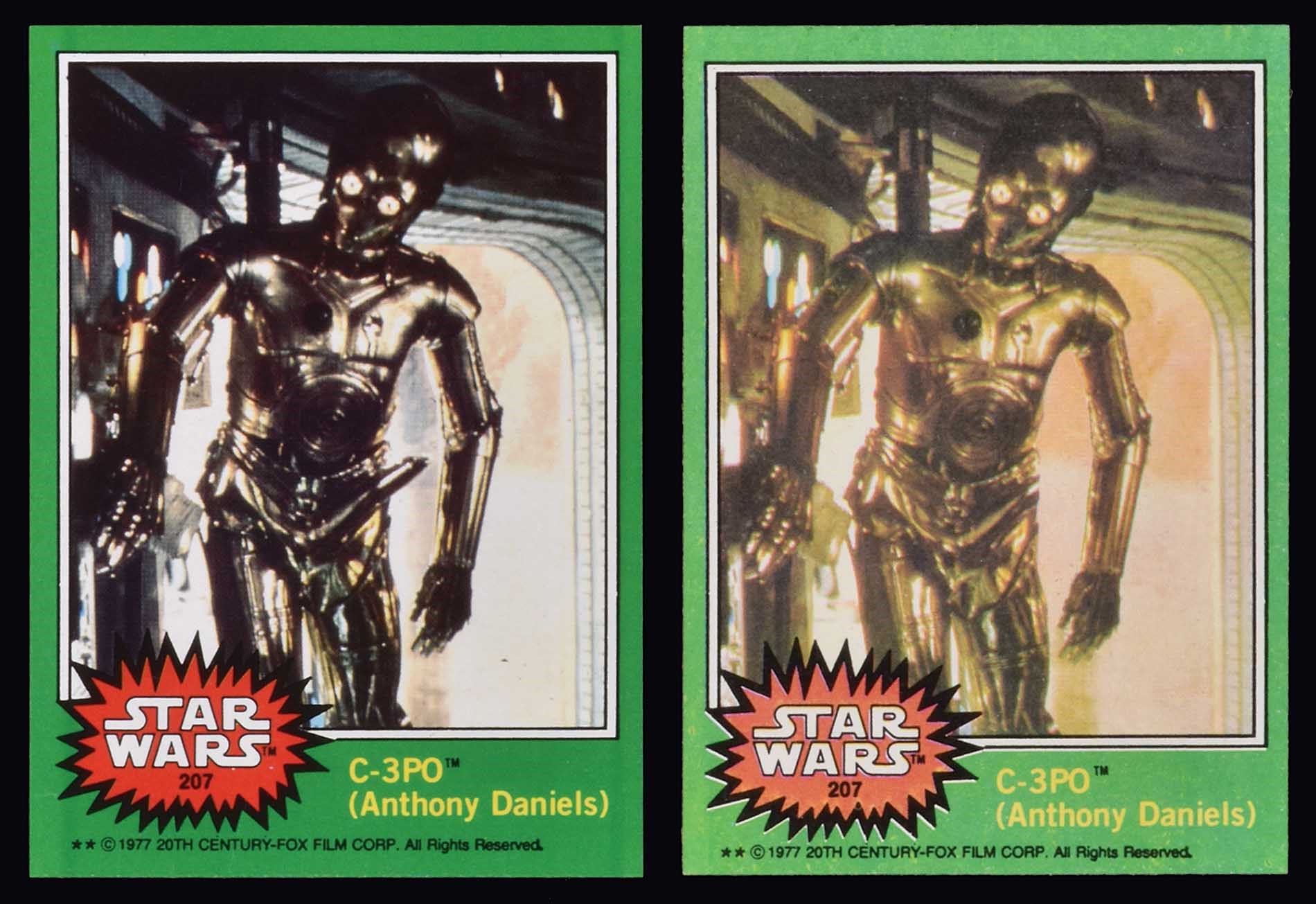 Gerani: For years, I had no idea what had happened with that original photograph. I thought, maybe they were having some fun on the set and Harrison Ford took a picture of it and they wound up in the library? Who knows, right?

Anthony Daniels, C-3PO actor, excerpt from I Am C-3PO: The Inside Story, 2019: Many years [after filming] a rather unexpected collector’s item would appear for sale. It transpired that a mischievous employee noticed a fold in the plastic part of the costume, just above where the top of the leg should have been. It was caused by the failure of the tape, allowing my leg to drop down. Very cleverly, if tastelessly, he painted in a quite credible extension. Threepio had never looked so excited.

I have always disapproved of the altered version, which somehow did go into circulation — though it was quickly withdrawn once the offense was discovered. I care less about the poor taste. It’s more that it insults and demeans a good friend of mine, who can’t speak for himself in this galaxy.

Lucasfilm, official explanation from 2007: It appears that the extra appendage is not the work of an artist, but rather a trick of timing and light. The untouched archive photo shows the image just as it appears on the card. The current theory is that at the exact instant the photo was snapped, a piece fell off the Threepio costume, and just happened to line up in such a way as to suggest a bawdy image. The original contact sheets from the photo shoot attest to this. They are not retouched in any way, yet still contain the same image. Whatever the real explanation is, the “mischievous airbrush artist” scenario simply doesn’t fit.

Gerani: Ultimately, the legend is better than the truth because, from what I understand, the costume was just falling apart and a piece that looked suggestive just broke, so it’s as simple as that.

Cam, C-3PO cosplayer and suit builder: I’ve been cosplaying as C-3PO for about three years now and I’ve built a couple of suits based on the original designs, so I can tell you exactly what happened here. It’s actually a flex in the shorts that caused that extension. 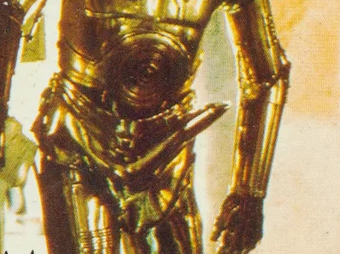 The suit was extremely inflexible, so several modifications were made to the shorts to do different scenes. The suit in the movie was also breaking all the time, so I’d say the plastic was cracked around the hip, which caused the plastic to stick out like a flap. If you look closely, that’s actually coming off of his side, not from the center. The crack, plus a bit of a reflection, caused that unfortunate-looking appendage.

Daniel Wallace, author of Star Wars: The New Essential Guide to Droids: If you’re looking for an in-universe explanation for what’s going on here, the best I can offer is that part of C-3PO’s chassis came loose, and that’s about it. That area only contains C-3PO’s pelvic servo motors, and not much else. He’s not like R2-D2 where he’s got a bunch of gadgets that pop out. Beyond that, I would hesitate to try to explain it because that really takes the fun out of it.

Gerani: It’s funny, I’ve worked on thousands upon thousands of cards over the past five decades, yet none is as famous as this card. I’ve seen T-shirts printed of this card and all kinds of stuff. Fans love it, and it’s become a pop-culture classic in its own right.

That’s good though, it’s good for people to have that. What am I now, 67? This is the year I turn 68, and I gotta tell you, if you love this kind of thing, the kid in you remains there forever — it never goes away. It will serve you too. As other people are depressed about getting old, we have this thing that we can tap into and lose ourselves in the way we have all of our lives. They don’t have that, but this will always enable us to always find some joy in life. We crazy fans and fanboys, we do have that going for us.