Sofia Coppola’s slight, wistful comedy pairs Bill Murray and Rashida Jones as a man and his grownup baby girl who spy on her husband to see if he’s having an affair. But what she’s really seeking are the answers to why her own father walked out on her.

Laura, the main character of On the Rocks, is a successful writer, mother and wife. Played by Rashida Jones, she has a gorgeous apartment in Manhattan and is married to a handsome entrepreneur whose new app looks like it’s about ready to blow up. Laura has everything, except for the fact that she’s never entirely gotten over her father. He’s not dead, but still he haunts her.

The new film from Sofia Coppola is her most lighthearted, but it’s also among her most melancholy, exploring how an accomplished woman can’t help but measure herself against her dad’s shadow, and also his failings. She loves her old man, and he adores her, but they’re bonded by the wound he inflicted long ago. And when a similar sin pops up in her adult life, she finds herself returning to that old pain. Her dad cheated on her mom when she was a kid — is her husband doing the same now?

On the Rocks serves as a reunion between Coppola and Bill Murray, who received his only Oscar nomination for his work in her 2003 film Lost in Translation. That film helped cement Murray’s transition from comedic leading man to sad-eyed dramatic character actor, and he’s in a somewhat similar vein here as Felix, Laura’s womanizing, globetrotting father. Felix is one of those cultured gentlemen who has a job that only people in the movies have — he’s an art dealer — and loves impressing folks with the places he’s been and the people he knows. He’s frequented every good restaurant and has stayed in every luxe hotel. His small talk consists of dropping showoff-y knowledge about esoteric bits of history, and he’s good at projecting an air of civilized worldliness. He thinks Laura is too good for any guy, and he believes to his bones that men can’t be monogamous. He should know — he never was.

Felix comes back into Laura’s life in the midst of a personal crisis she’s facing. Suffering from terrible writer’s block as she’s about to start a new book, she feels overwhelmed by her two young daughters — especially her infant — but her husband Dean (Marlon Wayans) is so busy schmoozing at late-night meetings that he doesn’t have much time for her or the kids. His life is filled with ridiculously hot young women — including his overly chummy assistant Fiona (Jessica Henwick), who Laura is fearful is sleeping with her husband. Laura feels so invisible — in his world, she’s just “the wife” — and she needs advice. Probably unwisely, she turns to Felix, who’s in Paris with his latest age-inappropriate beauty, but when he hears her anxious voice on the phone, he returns to New York. He suggests they do some undercover work: They’ll tail Dean to see if he’s being unfaithful.

There’s an intriguing potentially semi-autobiographical aspect to On the Rocks, considering that both Coppola and Jones are prominent daughters of larger-than-life fathers. (Sofia’s is Francis Ford Coppola; Rashida’s is Quincy Jones.) So it’s not a stretch to guess that they might understand something of the dynamic bedeviling Laura, who basks in her father’s affection while wondering what the cost has been to her own emotional well-being and development.

When Felix shows up out of the blue, complete with a fancy town car and driver, On the Rocks resembles an urban fairytale in which the princess is whisked away for evenings frequenting enchanted eateries and magical late-night spots. (Coppola and cinematographer Philippe Le Sourd shoot Manhattan at night with a lush, romantic glow.) Murray, frailer at 70 but radiating a paternal warmth, is like a fairy godfather pulling Laura out of her malaise. Maybe they’ll find out that Dean is cheating on her, but in the meantime, they’ll strengthen their lifetime connection — co-conspirators who have always enjoyed a rapport that no one else could possibly break. Never mind that Felix has an unspoken ulterior motive for helping his daughter: If Dean is indeed sleeping with Fiona, it’ll prove his theory that men can’t be faithful. And perhaps it also will, in some small way, make his own infidelity seem less egregious. After all, if Dean cheated, too, how mad can she be at him for doing the same thing so long ago? 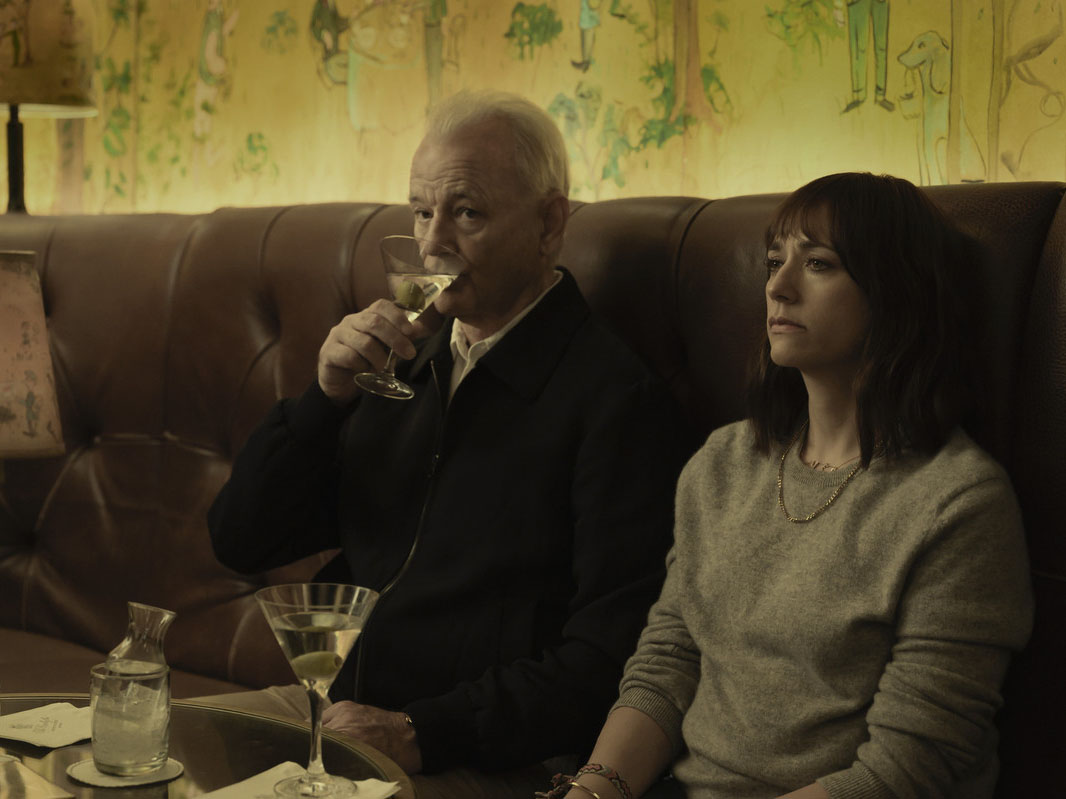 Starting with her 1999 debut The Virgin Suicides, Coppola has told stories about privileged, often fabulous people: Her characters are usually rich, gorgeous, well-connected, yet suffer from a nagging ennui, an emptiness that all their advantages can’t rectify. Anyone who doesn’t care a jot about a successful New York writer who’s as beautiful as Rashida Jones will probably have a tough time with On the Rocks’ low-stakes suspense. And perhaps recognizing how unimportant Laura’s problems are in the grand scheme of things, Coppola gives her story all the weight of a soufflé — it’s comparably light, tasty and insubstantial.

But while On the Rocks doesn’t entirely work — ultimately, the story gets too silly, and its ending is too self-consciously feel-good — what gives it life is Coppola’s exploration of a daughter still tethered to her dad. Uninterested in chit-chatting with the other moms at her kid’s school — Jenny Slate is forced to play a one-note bore who’s always gabbing about her self-help insights — Laura is, like Scarlett Johansson’s Charlotte in Lost in Translation, fundamentally alone, with Murray’s Felix the only person who seems to really understand her. But unlike that 2003 film, the relationship in On the Rocks is far more fraught. Laura disapproves of her dad’s womanizing — she rejects his thesis that men are biologically oriented to keep seeking new partners — but we sense that no man has ever made her feel special in the way that he has. That the same person who tore apart her family when he cheated could be the one to give her such a sense of security is On the Rocks’ fascinating conundrum, and as she zips around town — and eventually flies to Mexico — to snoop on her husband, the tension of this contradiction becomes increasingly apparent to her. Yet if she confronts her father, will he run away again?

Because Felix is meant to be an almost impossibly lovable hobnobber, it helps immensely that Murray plays him with a bit of a wink. The character is supposed to be a cliché — always smooth, always confident, the whole world his oyster — and Murray has the laid-back swagger to sell Felix’s bulletproof charisma while also slyly hinting that the guy is meant to be an exaggerated comic construction. On the Rocks is the sort of movie that, to demonstrate Felix’s teflon assurance, has him get pulled over by the cops for running a red light. Not to worry: Felix knows the policeman’s dad — and also everything about the family — and soon they’re best buddies. Felix gets off with just a warning, which exasperates but doesn’t surprise his daughter. Some people just live a charmed life. 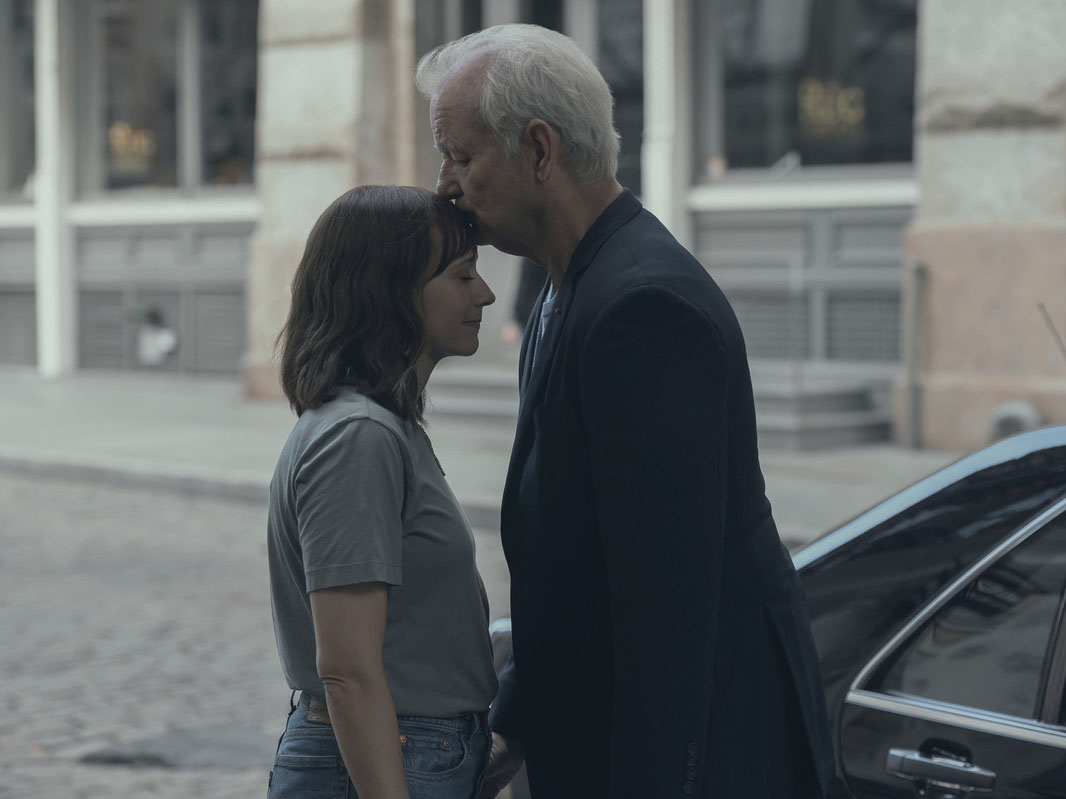 It might be great to have a dad like Felix — the kind of father who has the key to every door and who can make your every wish come true. This slight film doesn’t have enough heft to give those ideas a rigorous examination, but in Jones’ adorably insecure turn as Laura, we get a clue of how it feels to be that man’s kid. When you have a father who can open every door, you don’t have to figure out how to unlock them yourself — and when the world isn’t as easy for you as it is for him, it might make you start to wonder why you don’t have the same magic dust sprinkled on you.

Felix and Laura are bonded by blood and affection, but they’re profoundly different people. Sometimes, that makes Laura happy; other times, it’s her misfortune. On the Rocks means to be a frothy mystery romp about a possible infidelity. It ends up being about how a daughter discovers that she’s been cheating herself out of a more fulfilled life because she’s still wanting her dad to fix everything for her.