While You Weren’t Looking, Nerf Guns Got Terrifyingly Militaristic

Bigger, badder automatic weapons with actual cryptofascist insignia: This is the military-industrial complex for tykes

More than 50 years ago, inventor Reyn Guyer — who had already helped create the hit party game Twister — was shopping around a line of indoor games that used polyurethane foam balls. Parker Brothers wound up running with the concept, but initially sold just the 4-inch ball itself, touting its safety in ads: “You can’t damage lamps or break windows. You can’t hurt babies or old people.” In 1970, Americans bought 4 million of these squishy “Nerf” balls, named after a slang term for foam padding on a Jeep’s roll bars. Nerf basketballs and footballs soon followed. Fun! Safe! Happy! 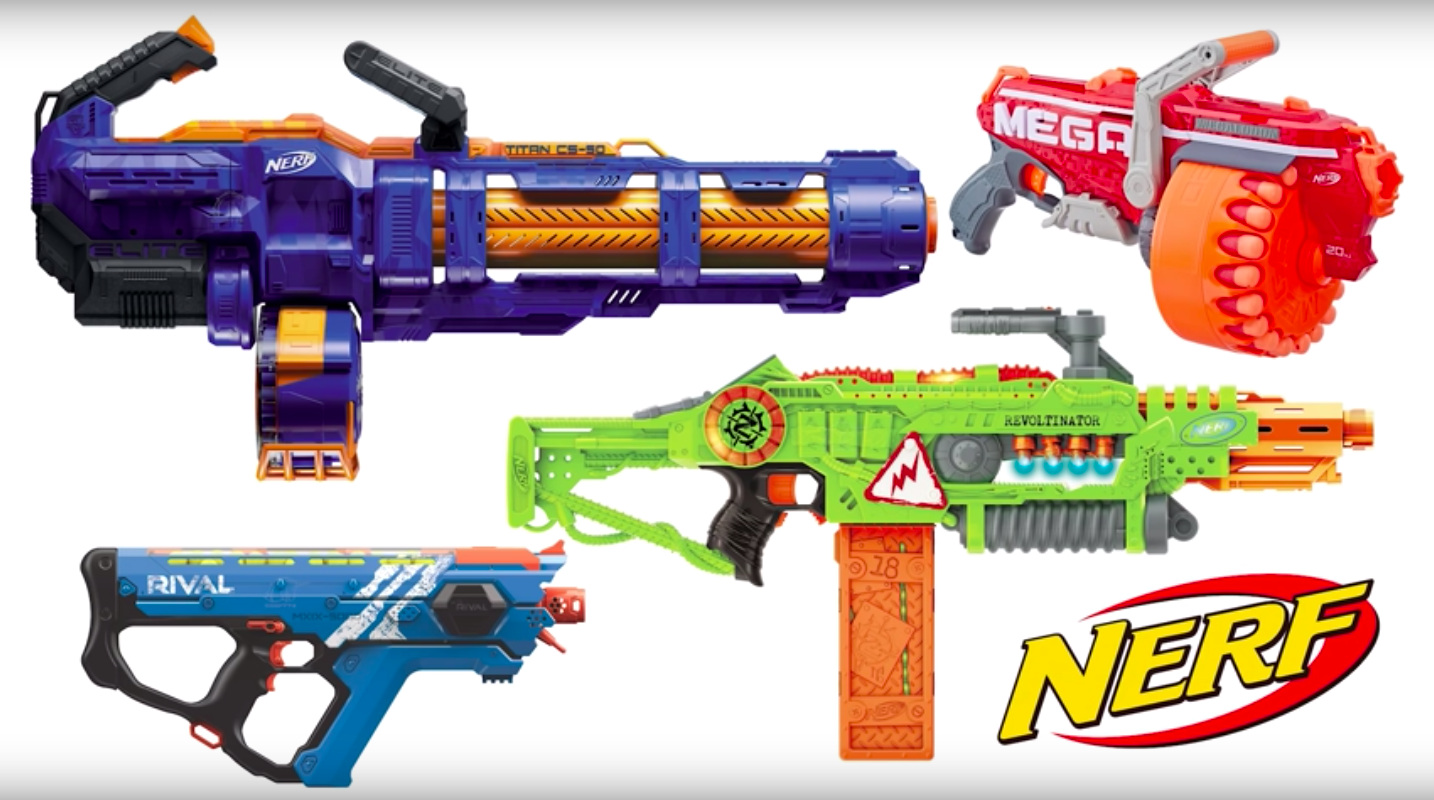 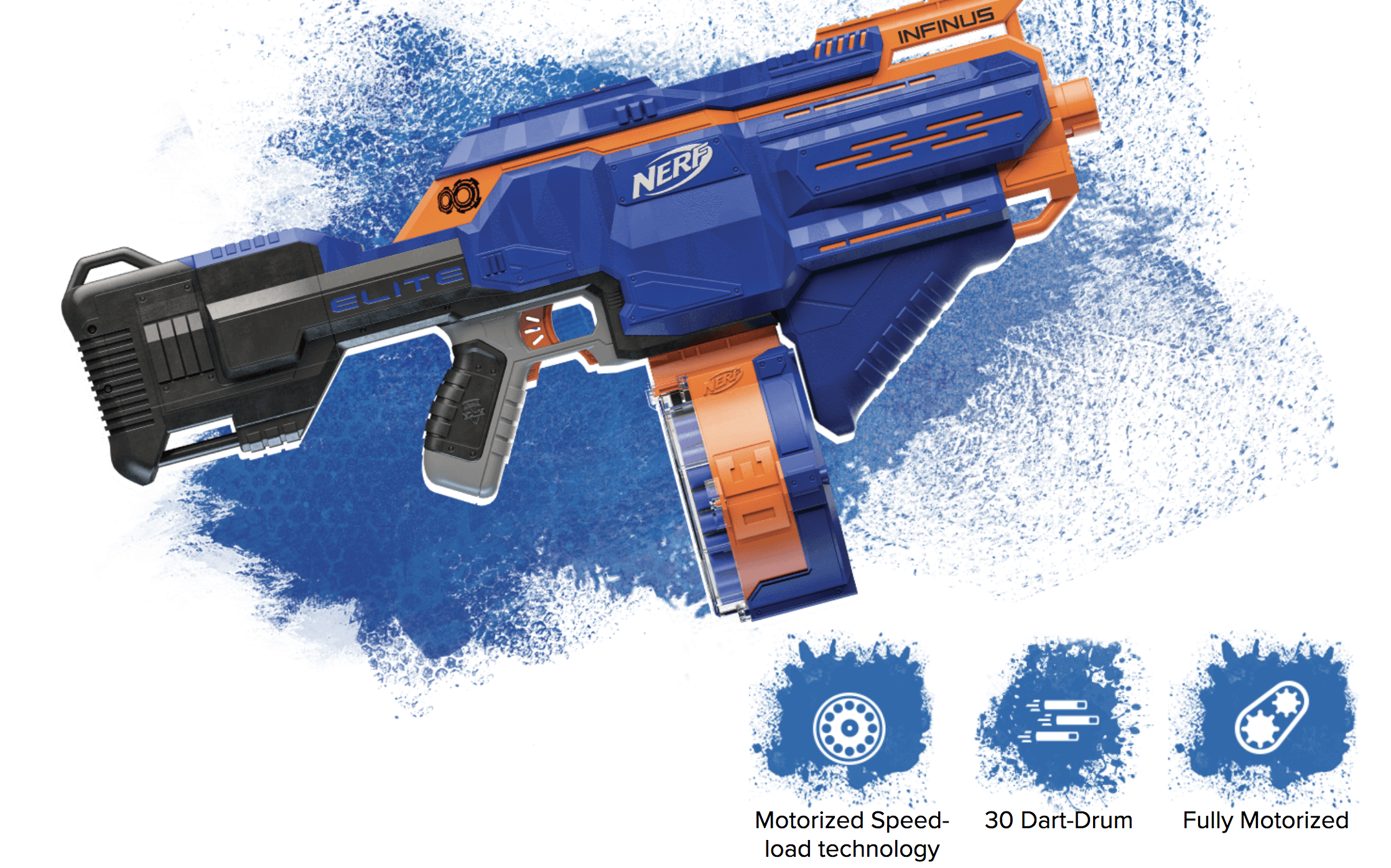 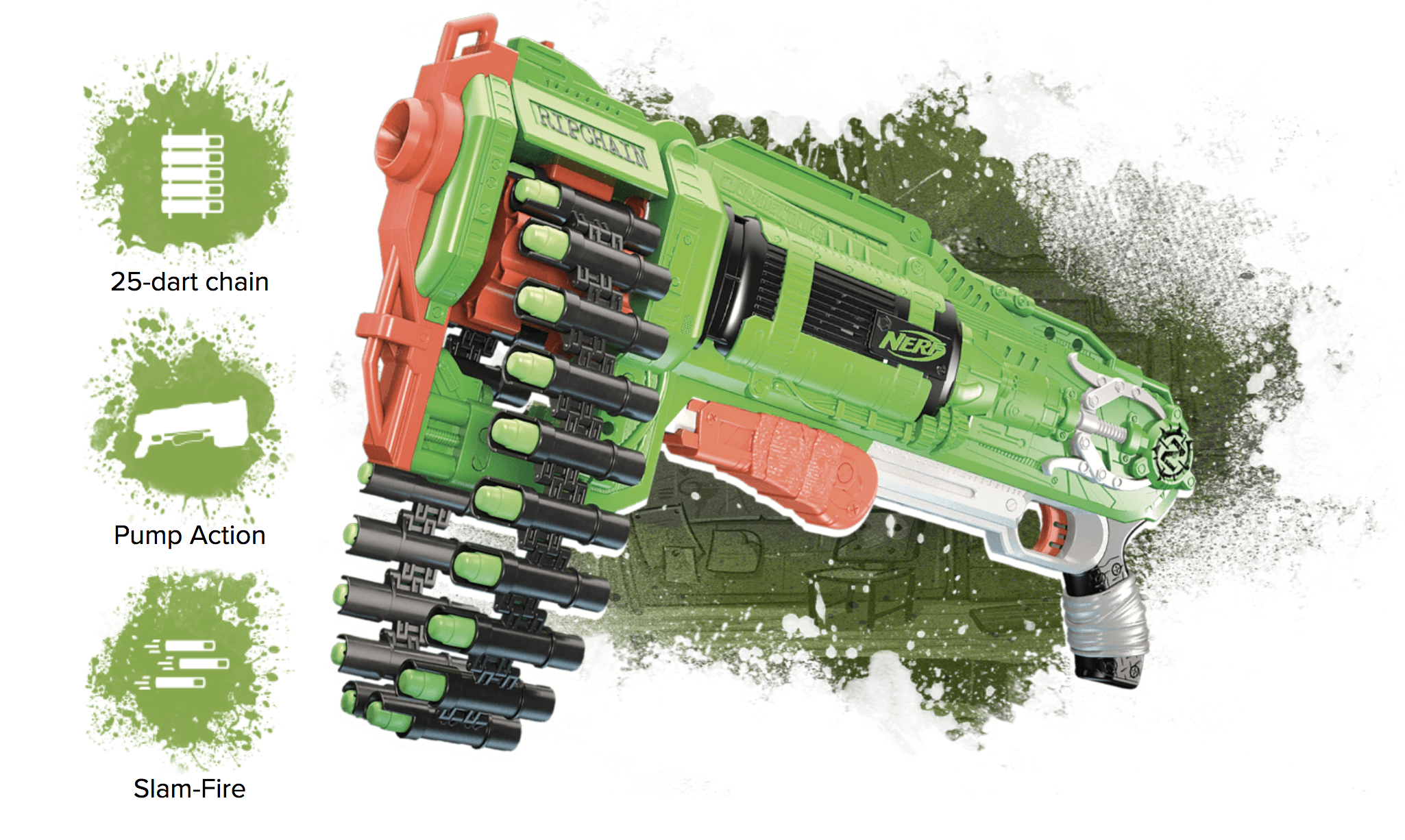 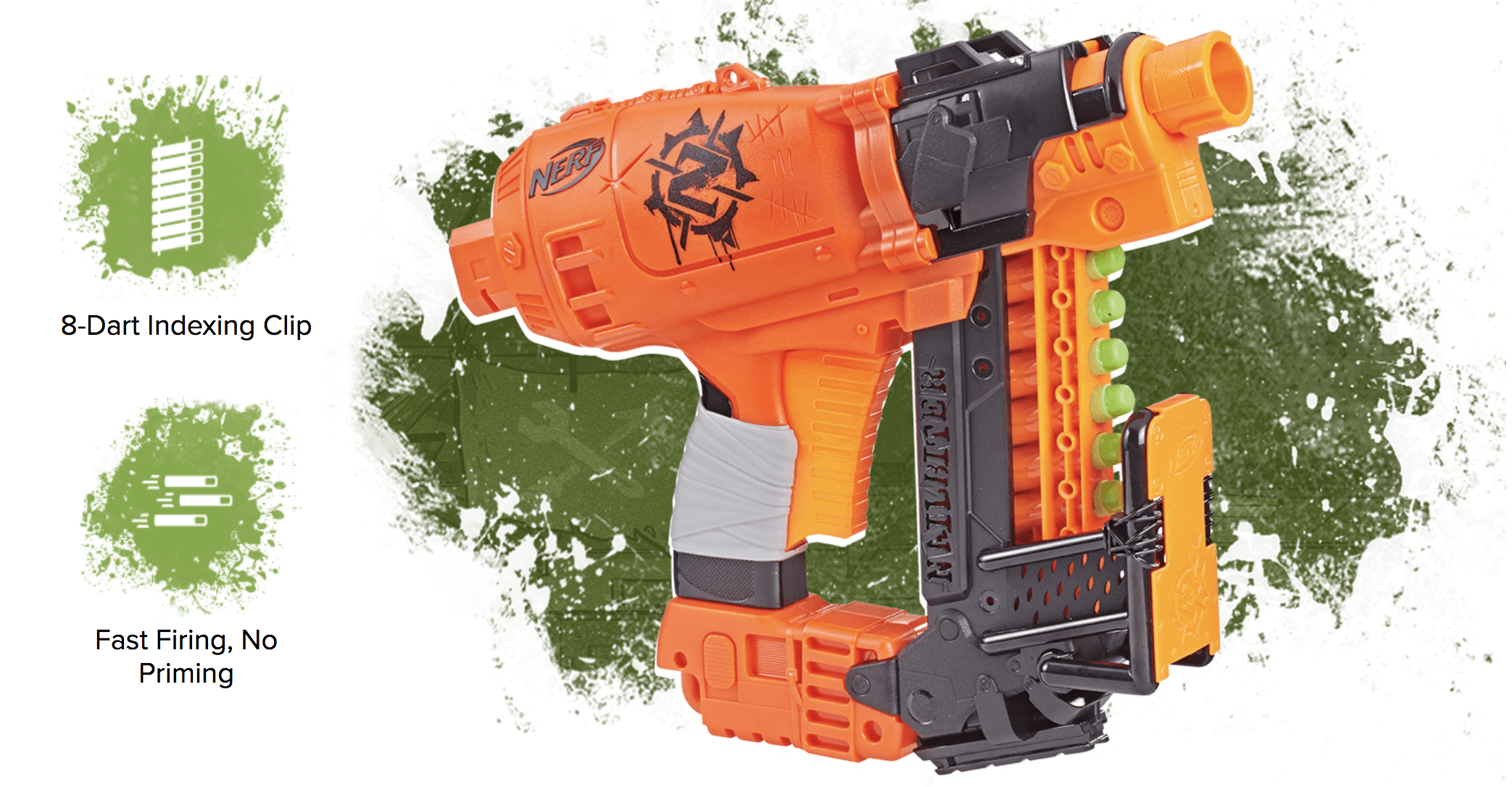 Hahaha! Normal, responsible toys for a country in the grips of a gun violence epidemic.

Hasbro makes $1.85 billion a year on these “blasters,” now the bread-and-butter of the Nerf empire, as schoolchildren are routinely terrorized by active-shooter drills designed to prepare them for a random mass killing. Why, yes, the Titan CS-50 is a new $100 gatling-style device with a 50-dart drum, and, according to Popular Mechanics, this “full-auto, flywheel-powered monster has a spinning barrel to make it all the more menacing.” I, for one, am glad there’s an “awesome” Nerf tank drone now. Thanks, Wired!

Look, I get that one can’t complain about Nerf guns (that’s what they are, no matter the marketing) without sounding like the worst kind of helicopter parent. Moreover, I loved Nerf-dueling with my little brother when these dart-slingers took off in the ’90s, so let me preempt the right-wing talking point now: I’m a big crybaby hypocrite. Owned. By and large, the ammunition is physically safe, minus the occasional lost eye or traumatic retinal dialysis, injuries that may have something to do with the ascendance of “high-impact” ball-shaped Nerf rounds and overbuilt guns that blast them at up to 70 miles per hour. The fandom, too, is doing its part to beef up the Nerf line with extreme mods. 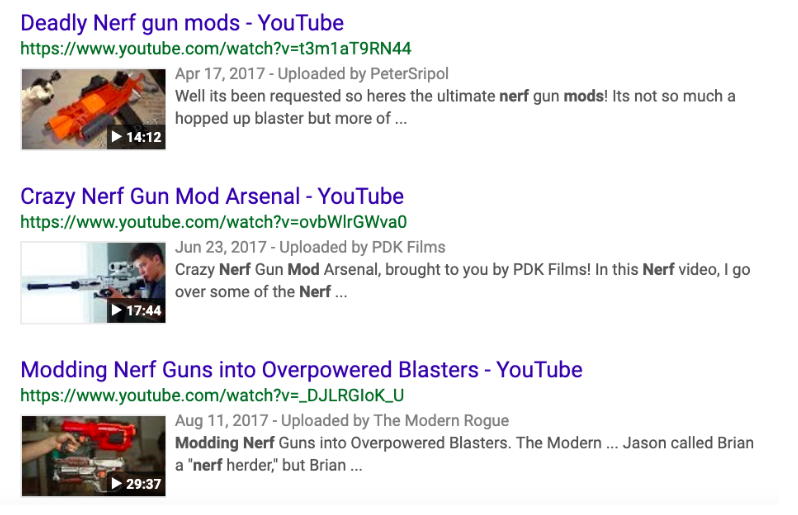 If you asked 10-year-old Miles Klee whether he needed that kind of firepower, he’d probably beg for it, just to have an advantage in the next skirmish — and that, I think is the crux of what bothers me about Nerf warfare as an adult: It’s an arms race.

This is the military-industrial complex for tykes, always pushing toward bigger, badder automatic weapons with more cryptofascist insignia. The graffiti-style helmet on one of the Rival blasters is practically a ripoff of the skull design associated with vigilante comic book character the Punisher, a logo embraced by shitty cops and soldiers who want to openly advertise their bloodlust. The NRA would likely prefer that moms and dads buy their little ones actual rifles as soon as possible, but hey, this’ll do as a placeholder.

After the Sandy Hook Elementary School shooting in 2012, some wondered if toy guns would finally fall out of fashion, even despite the exaggerated shapes and neon accents intended to differentiate them from genuine firearms. Nope! We’re still arming our youth for the arrival of Nerf-zombie hordes. More to the point: We’re making sure our boys, already hyped on the sanitized, PG-13 deaths of the Marvel cinematic universe and video games, see an arsenal of munitions as both necessary and a source of fun. Most won’t grow up to try anything crazier than a round of paintball now and then, but all will have a deep association between gunplay and dominance. Even the defenders of Nerf’s battle gear say it’s a good outlet for boys to “to act out power and victory and triumph,” as if there were no other way for them to feel validated.

It’s true that I can’t foresee, in my lifetime, an American landscape where kids aren’t at least shaping their hands into pistols to blow each other away. And if our country can’t adequately control deadly firearms, I can’t imagine a crackdown on their symbolic counterparts, either. I only find it sad that Nerf, created for the purpose of low-key novelty sport for the family, now rakes in a majority of its profit from increasingly aggro plastic cannons that now realistically imitate and valorize the weaponry used in our hellish overseas conflicts. And that’s saying nothing of the immediate lesson in Nerf combat: The rich kids win because they have the rocket launcher that came out yesterday, thereby ensuring you’ll go home and ask your parents for an upgrade.

I figure if anyone has a shot of reorienting the brand toward its peaceful origins, it would be Reyn Guyer, the entrepreneur who dreamed up the Nerf ball in the first place. To that end, I’ve reached out for his take on the evolution of Nerf guns over the past three decades, beginning with 1989’s “Blast-a-Ball” concept, amazingly innocuous in comparison to what we see today. Does he support Nerf disarmament? Will he offer a solution to the state of Nerf carnage? I dearly hope so. Until then, watch your back. 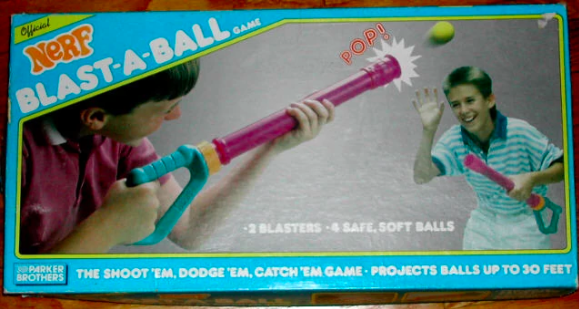