My Month With a ‘Bottom Coach’

From mitigating poop, to pain, to societal pressure, these bottom coaches help tops like me flip the script

From getting it, to eating it, to having it, welcome to Ass Week, MEL’s weeklong exploration of the body part du jour.

When I came out of the closet 20 years ago, one of the things that assuaged the anxiety of telling everyone I was gay was telling myself I was a top — the penetrator in bed rather than the penetrat-ee. (I considered including the distinction when coming out to my mother, like a consolation prize of sorts, but couldn’t get the wording right.)

There’s still, however, the matter of the fencepost.

And so, a few days into the new year, I enlist Ken Howard, founder of GayTherapyLA, as my anal advisor. The bearded fortysomething with a whispery baritone isn’t surprised to learn why I’m seated in his dimly lit West Hollywood office. Over a blaring white-noise machine, he leans back and explains that, around 40, many men begin to question things that have been there their whole lives. “It’s time to come down to brass tacks about how you want to express yourself sexually,” he encourages. To help me express myself, I’m asked to complete the following sentence: “To me, being a bottom means…”

“Subordinate, submissive and feminine,” I reply.

“You say those like they’re bad things,” Howard challenges, noting he used to hang out in Laguna Beach with tough Marines who all tended to be submissive bottoms. “They considered it a status symbol,” he says. “Like being able to run a mile with a bunch of weight on your back.” (Or in it.)

I didn’t want to just take Howard’s word for it, though. And so, to bolster the coaching staff that would help me embark upon a new life as a bottom, I asked four additional ass aficionados to share their do’s and dont’s on taking a D with me, too:

Together, over the last month, my band of brown belt brothers have counseled me on preparing my ass — and mind — for penetration.

For instance, regarding my feminine concerns, Alvear challenges me to consider the last time I checked myself for “acting like a girl.” “Do you cry at movies?,” he asks. (Sometimes.) “Is that bad?” (I guess not.) “Trust me, every bottom has a moment where he wonders, Wait, did I just skip down the hall? Consider every gendered judgment you make,” he directs. “And be patient. It takes time to unblind yourself from lifelong assumptions.”

Beastly Bottom, meanwhile, notes the importance of the word “hold” while offering a quick biology lesson. There are two muscles in your rectum, he explains, one you can control (the outermost sphincter), and one that’s involuntary (the innermost sphincter). “You can loosen up your hole as much as you want,” he says, “but if that inner sphincter doesn’t wanna open, that’s where the pain happens.” Gentle pressure is required, so I’m instructed to have my partner begin to penetrate the second sphincter while I repeat, “hold, hold, hold.” (Beastly assures me it typically loosens up in 30 to 60 seconds.) “Any good top knows you’re gonna need to hold,” he vows.

Position-wise, Beastly recommends taking an assertive stance on the first dip. “Tell him you’re gonna sit on his dick, or ease back into him doggie style. First-time bottoms shouldn’t get in a position where all of the top’s weight is forcing his dick into you at a pace you can’t control.” Sitting on a cock allows you to control how much you’re penetrated, agrees Cheves. “There’s no question that from a physical standpoint, that’s the least painful way to bottom,” he declares.

Unfortunately, though, it’s not necessarily the most pleasurable, explains Glickman, who has spent his career recommending that straight men get anally penetrated . The most important thing with prostate play, he tells me, is “stroke don’t poke.” Which may require trying out different positions to see what works best. “It changes from person to person,” he explains. “If you’re at an angle where the head of his cock is banging into your prostate, a small shift of your hips will result in it gliding back and forth over it instead.”

I haven’t laid eyes on my own asshole since “Dubya” was president, so aesthetically speaking, I ask Beastly what tops will be expecting down there and he explains tastes run the gamut. “I’m a naturalist, so my answer would be not to touch a thing. In the same way that if you only brush your teeth once a day, the person who falls in love with you will learn to deal with that, they’ll get used to your butthole looking the way it does. It’s like chest hair. People who like hairy chests will say, ‘Don’t you dare trim it!’ So some guys are turned on by hairy holes, others prefer smooth.”

As I’m in the second camp, Howard recommends I book an appointment at Smooth Cheeks, where owner Gabriel Suarez specializes in beautifying the bottom playing field. When I arrive, Suarez invites me to take everything off except for my socks (it’s a little chilly), and stand on all fours on a massage table. “The good thing about waxing the inside of your butt is it never breaks out,” he explains, painting my brown eye with a generous coat of piping hot lacquer. “And super smooth is great for getting rimmed. Alright, here we go… One, two, three—”

All at once, the entirety of my asshole hair is stripped off by what feels like a flaming York Peppermint Pattie. For Saurez, though, it’s old hat. He averages five such procedures a day, and at an affordable 40 bucks, it’s cheap enough for pretty much anyone who wants to “open up their hole for the sun,” as Suarez puts it.

On that note, Glickman suggests an (un)dress rehearsal before opening night. Whether that’s with a trusted friend, a sexological bodyworker or even a sex worker, he recommends taking the pressure off of what will likely be a tense encounter. “It’s a lot harder to interrupt things and say, ‘Wait a minute, this isn’t feeling right,’ or, ‘This has been fun, but I’ve had enough’ because your partner’s wants, needs and desires will be at the forefront. Whereas with a professional, you can treat it like a hands-on, paid training session.”

Alternatively, Alvear says dry(ish) runs can be done at home using nothing more than fingers, toys and deep breathing. In fact, they must be done in order to mitigate the pain on gameday. “Your body needs time to adapt,” he explains. “The idea that you’re going to be able to magically stretch your sphincter the very first time you bottom is ridiculous.” That’s why Alvear invented the “Sexhalation Method,” a step-by-step guide to expanding the sphincter. The mantra: Don’t insert a penis into your rectum; exhale and relax onto it. 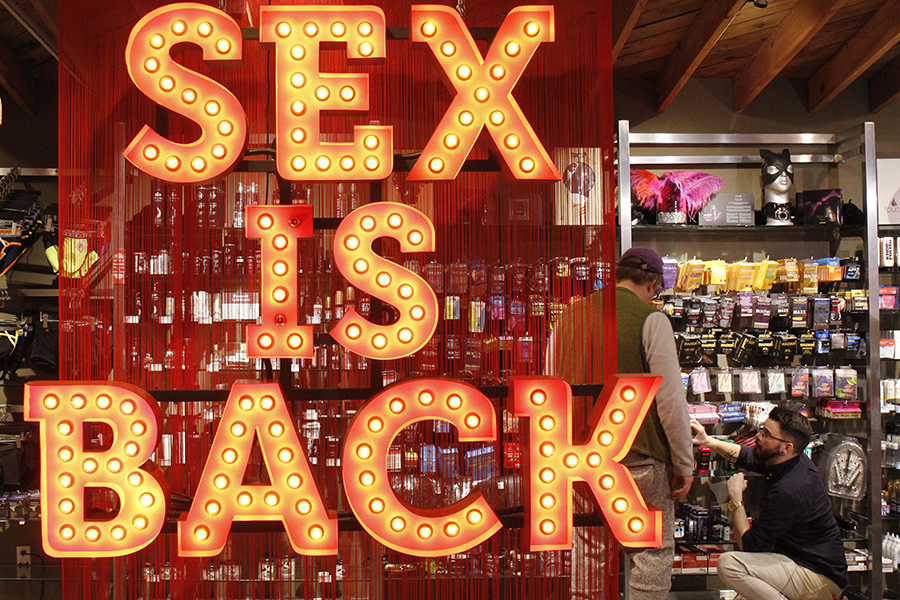 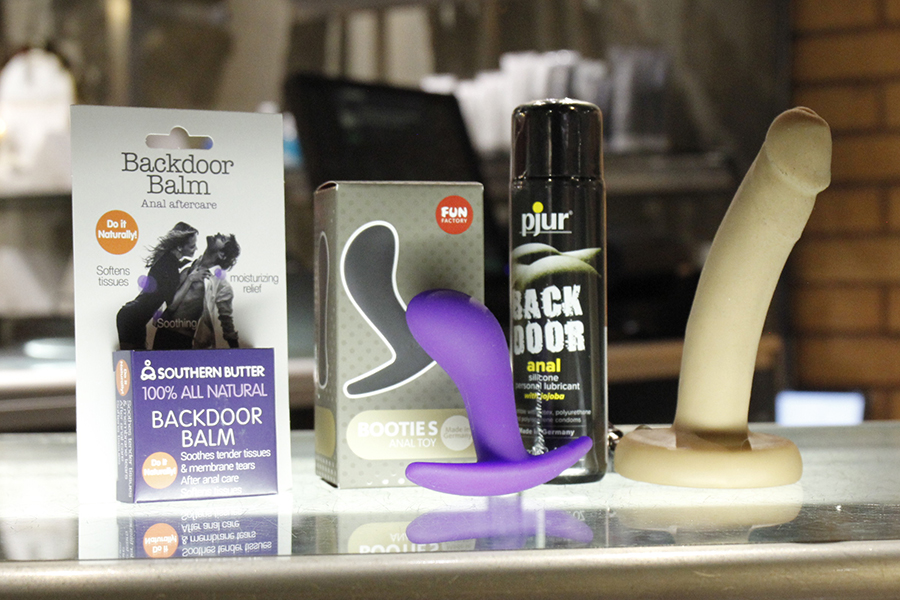 Howard also recommends picking up a bottle of Pure for Men, a “cleanliness supplement” that’s marketed to gay men to regulate bowel movements. “It makes your stools softer and better formed,” he explains. “Some guys say they don’t even need to douche with water because you eliminate in totality.” As Lawrence Johnson, founder of Pure for Men, tells me, “Historically, one of the reasons ‘top’ gay men don’t bottom is discomfort with ‘accidents’ and cleanliness issues. Pure for Men’s secret sauce is a proprietary blend of water-soluble and insoluble fibers. Metamucil is straight up psyllium husk, a great soluble fiber that brings bulk to your movement as it passes through your digestive tract. But Pure for Men also has insoluble fibers — chia and flaxseed — that provide a physical scrubbing as they move through your tract. So in addition to binding to free-floating particles like Metamucil, Pure for Men scrubs anything else that’s left along the walls of the tract, making sure that everything comes out — which is the name of the game for bottoms.”

But not all bottoms. “I don’t respond as well to pills,” explains Cheves, who prefers Metamucil for regulation along with a healthy diet — i.e., lots of veggies and fiber. “The more vegetables, lean meats and bifarious foliage you eat, the more cleaned out you’ll be and leave nothing behind, which is when we get into trouble.” Alvear, on the other hand, says not to overthink my diet, though he does add, “I wouldn’t eat a big burrito before bottoming.”

As for douching, Cheves says I want my body to do 90 percent of the work, so when I go into clean before sex, I should only be picking out the leftovers. For Beastly, such work is done via a daily douche in the shower, “because a), I’m a slut and you never know; and b), I just like the feeling of a clean hole.” He recommends the Ergo Flow Shower Shot, a small device that clips onto your shower head. (“P.S.,” he adds. “Invest in some Drano.”)

Now that I’m groomed, stretched and douched, Howard sends me to Beth Moore, a colorectal specialist, to inspect my hole and make sure everything’s ready for business. She removes a stubborn skin tab and sends it to the lab to make sure it’s not something more serious. (It isn’t.) Similarly, Howard has me get a full lineup of STI tests at my doctor, which likewise come back negative. (Small fist pump.)

While there, Howard also encourages me to get a prescription for Truvada, aka PrEP, which, when taken daily, offers more than 99.9 percent protection from contracting HIV. (Tops, of course, take PrEP too, but bottoms are at greater risk for contracting HIV due to the sensitive lining of the anus being more susceptible to cuts and abrasions during sex.)

“Since the advent of PrEP, you need to know a majority of guys are refusing to wear using condoms,” Howard warns. As a Gen-X’er whose earliest gay memory came in 1987, solemnly circling the the AIDS quilt on the National Mall with my mother, this takes my breath away. “If you’re willing to bottom without a condom, that’s going to make you much more popular with tops,” he presses. (Millennials killed condoms, too.)

Upon further review then, PrEP seems like a no brainer — until I get the bill. 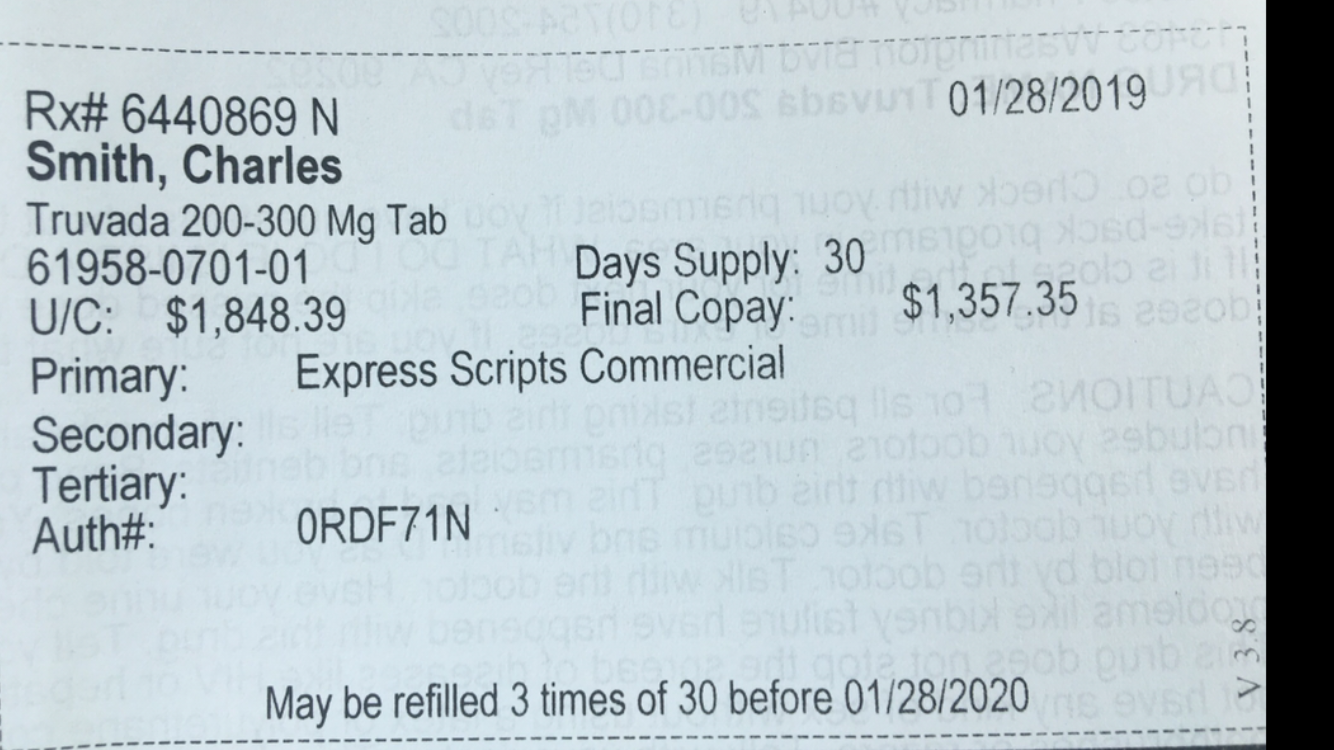 Even with my PPO employer-based health plan, a 30-day supply of Truvada is $300 more than my rent. Unsurprisingly, gay activists are calling bullshit, arguing a lifesaving drug is meaningless if people can’t afford to take it. “If there is any example of the dysfunction in the American pharmaceutical system, it is this case,” James Krellenstein, a member of the AIDS advocacy group ACT UP New York, told VICE last year. “We have the most effective tool for ending the HIV epidemic, and one reason we’re unable to scale up is because it costs so [much] unnecessarily.”

I obviously have less lofty goals, and 10 months to achieve them to make good on my New Year’s analution. Periodically I receive encouraging texts from Beastly. A sample text: “There’s no such thing as too much lube.” Howard also suggests I set up a role-play scenario on gay dating apps. “Role play is a sexual variable, like leather, rubber, sports gear and wearing panties. Partially because it’s true, and partially because it’s hot, you might explain to your partner beforehand, ‘This is actually my first time getting fucked. So why don’t I be the pledge trying to get in the fraternity and you be the pledgemaster?”

Then, last night, seemingly out of the blue, I went back and forth with a guy on Adam4Adam for two hours. TopBlkHunk9, a “ripped, 35-year-old black top” was in search of a “beefy bottom,” fitting (pun somewhat intentional) my 2019 life goals to a T.

So who knows what the rest of the year will bring.