Mountain Dew Is an Underrated Mixer

If it seems trashy, that’s because it’s supposed to be

There is no beverage more closely associated with being “white trash” than Mountain Dew. Even the name, a reference to its Appalachian origins and a slang term for moonshine, is suggestive of hillbillies. The early marketing even referred to it as “hillbilly joy juice,” featuring a mascot named Willy the Hillbilly.

But I feel the same about Mountain Dew as I do Joe Dirt: They’re making fun of us, yes, but in some ways, they’re representing us, too. I’m not from Appalachia, and today I probably look a lot more like a coastal media elite. But growing up in a rural region of Western Massachusetts called the Hilltowns, I come from a community of hillbillies. This might be why the first mixed drink I ever began to hold close to my heart is the criminal combination of Barefoot Pink Moscato (or whatever other shitty pink or white wine I could get ahold of) mixed with Mountain Dew. My best friend and I had a brilliant name for it: WineDew.

I’m not even big on sweet wines or sodas, but somehow the combination worked, even if only by its ridiculousness. We’d pretend it was a new product we’d developed, and we’d DIY ridiculous marketing taglines and images to “promote” the concoction. 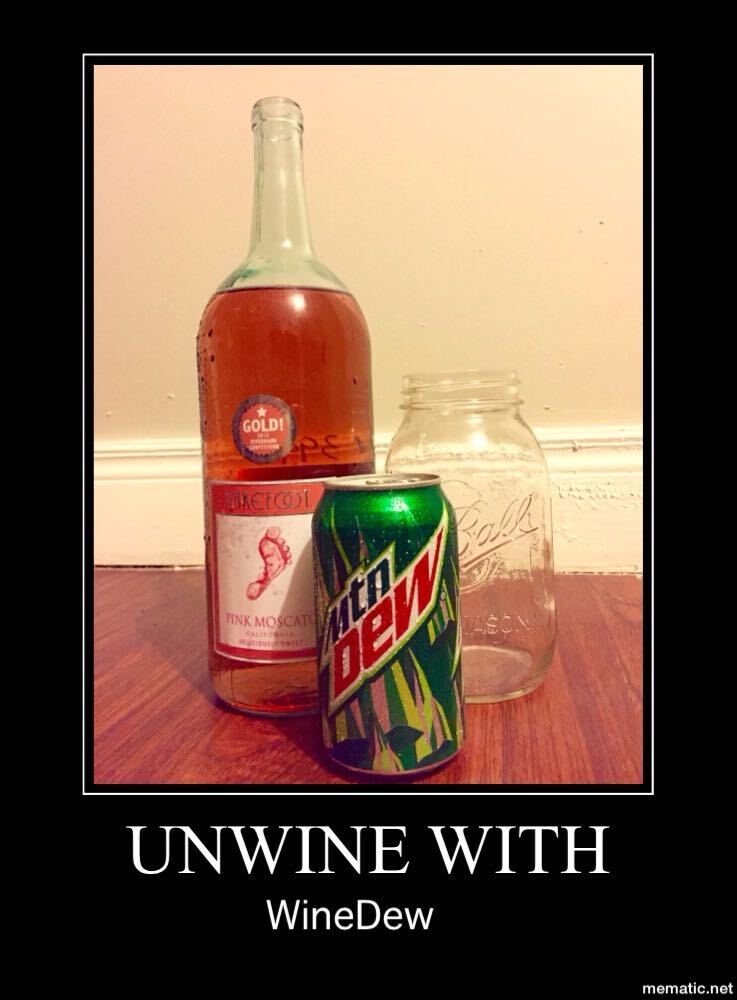 It’s been a few years since I’ve had a WineDew, but Mountain Dew (technically now stylized as Mtn Dew) still holds its weight as a mixer. In fact, it was designed to. According to The Appalachian Archives at East Tennessee State University, Mountain Dew was developed in the 1930s in Knoxville, Tennessee, by the Hartman Brothers, who specifically sought a mixer for their whiskey. It passed through a few hands and took inspiration from lemonade-flavored soda creator Bill Jones in Virginia, before becoming the Mountain Dew we know today.

Yet while Mountain Dew was created as a mixer for whiskey (or, as the name suggests, moonshine), it goes with just about anything. Whatever works with lemonade probably goes just fine with Mountain Dew, too. In season four of Mad Men, the ad agency is tasked with developing a marketing plan for the soda offering suggestions for cocktails. “Vodka and Mountain Dew is an emergency,” Peggy Olson says at one point.

Maybe WineDew is a bit egregious, but Mountain Dew and whiskey, or most any other liquor for that matter, is the perfect simple drink. I’d bet a Mountain Dew Baja Blast blends seamlessly with tequila. Although today’s Mtn Dew aligns itself with extreme sports and gamers, I still think of it as the idiotic drink of my Hilltown summers –– and that’s just as it was originally intended.