Uncasing the Mystery of the Cursed Viral ‘Meat Clown’

His name is Billy Roll, and European children love to pluck out his eyes and wear his face like Ed Gein

The image of the deli counter might have been grainy and distorted, but the clown was unmistakable. There he was, clear as day, staring back at me, smiling forth from a roll of lunch meat, existing as if he belonged next to the ham and salami. Where he resided in the real world was a mystery, but he was everywhere online. In fact, as I quickly discovered, internet searches for “clown meat” was a fool’s errand. Instead of answers, meat clown queries merely begat more meat clowns — meat clown merch, meat clown memes, meat clown commercials. 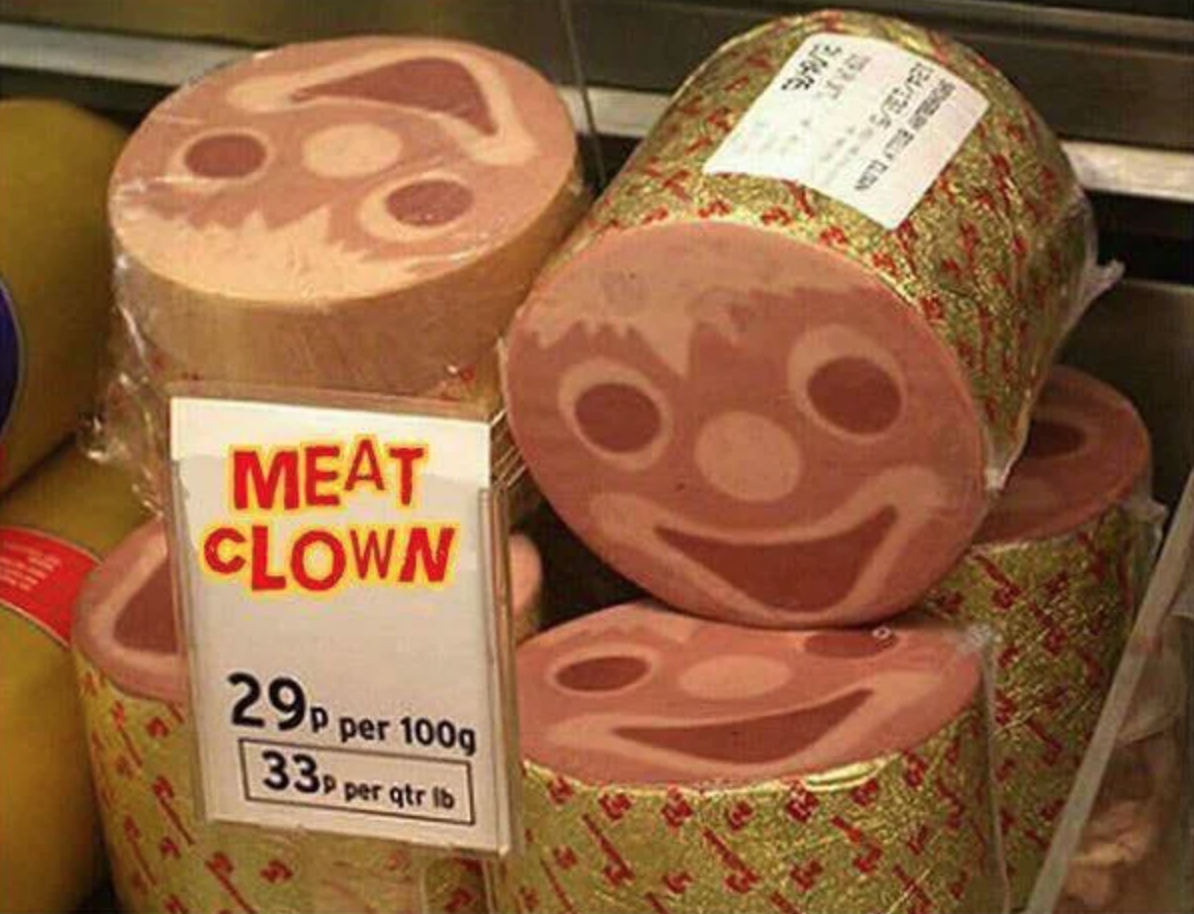 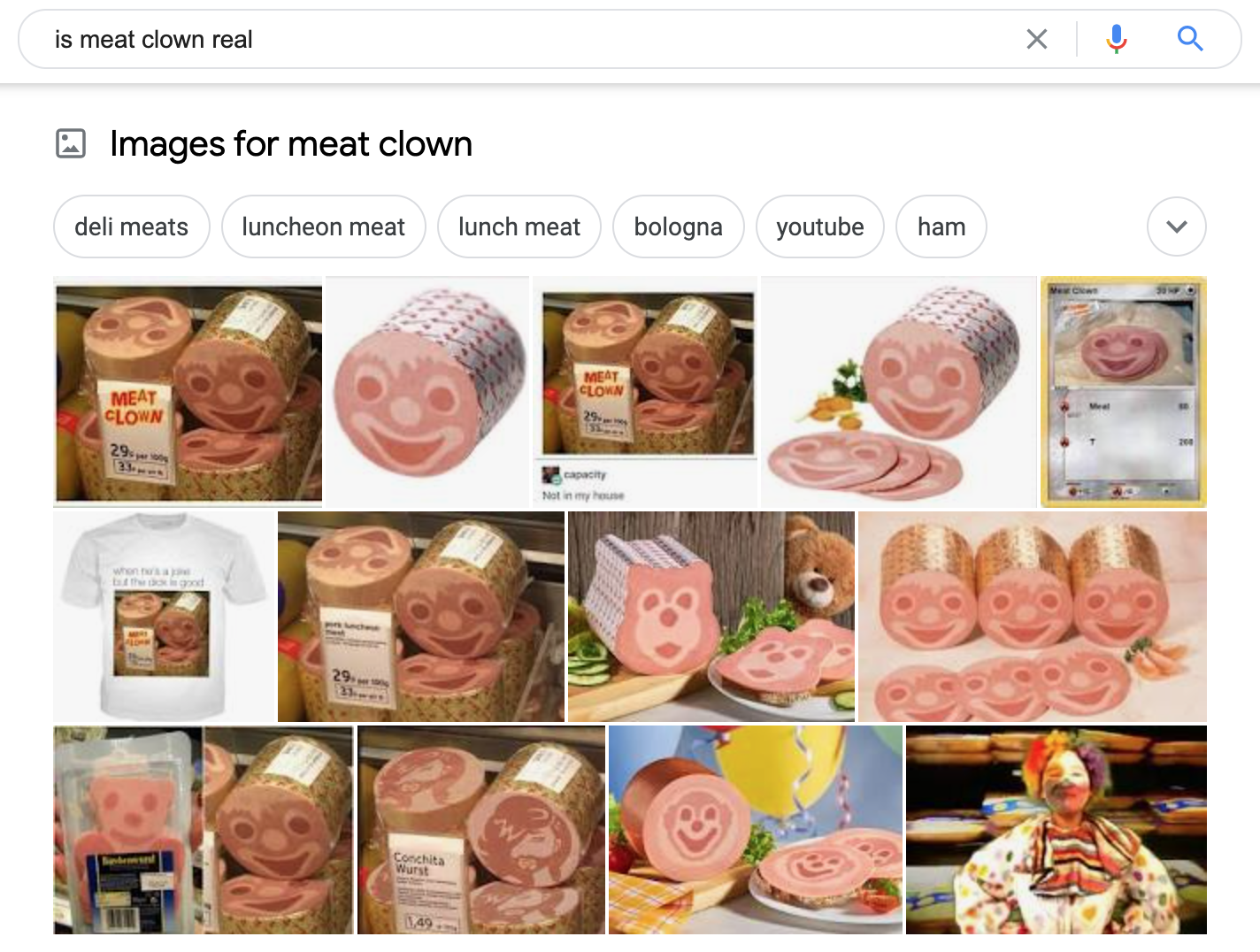 As it turns out, though, he’s definitely very real, as much a part of our meatspace as you or I. He has a name, too: “Billy Roll.”

Billy Roll is manufactured by the Feldhues Group in Ireland, where he’s considered “a sandwich filler beloved of a generation of Irish children.” Per Feldhues’ website, “Billy, the smiling sausage” was born in 1986 after a technological breakthrough allowed the company to produce “a clown face in the meat slice,” which was the “world’s first character meat product for children.” (“No one else in the world has been able to prepare meat products like we do, and our process is a secret,” a Feldhues rep bragged to the Irish Times in 2019.)

The company offers other meat shapes and characters as well. One is “Billy Bear,” a meat roll cut into the shape of a bear head, and “Happy Clown,” a meat roll with a different clown face. (Whether that denotes the existence of an “Angry Clown” meat roll is unclear; the Feldhues Group didn’t respond to my questions.) They even offer customizable meats for all your meaty branding needs.

What, though, of the children whose sandwiches are adorned with clown meat? Does it delight them in a Bozo’s Circus kinda way, or scare them shitless, like Pennywise?

“As I remember, the eyes popped out, leaving perfect circles, and the mouth could come out with a bit more dexterity,” says freelance writer Donna Bloss, who grew up in Cork, Ireland. “It’s like perforated paper — easily tearable.”

“Once the eyes and mouth were removed and graciously eaten, came the spectacle: Billy Roll is now my face,” Bloss continues. And after putting the meat clown’s gaping eye and mouth holes over her own, she’d eat whatever remained of the buttery deli meat “with utmost pleasure.” “It was my favorite school lunch. If my mom came home and there were Billy Rolls in the shopping, I was very excited,” she tells me. “I remember opening my sandwich at lunch, bread having become stuck to the meat with the butter, and wanting to pick at the face.”

“My brother and I used to beg our parents to buy us Billy Bear ham for our sandwiches when we were little, even though it’s clearly just super-processed gross meat that as adults we wouldn’t dream of eating,” laughs Tabby Farrar, who similarly grew up eating Billy Rolls in the U.K. “You used to be able to buy it from the deli counter in the supermarket alongside all the proper meats, by the slice, which is hilarious. Imagine working at the deli, slicing honey-roast ham and expensive cheese all day, and then you’ve got to slice a series of faces off a big log of bear-faced ham. Ridiculous, but also absolutely brilliant.”

Farrar says she’s seen some in the media trying to denounce the meat clown and bear, “claiming things like ‘British people are disgusted by these Irish food items,’ but I can absolutely assure you that it’s nonsense.” She adds, “All my friends at primary school would see having Billy Bear ham sandwiches as the coolest thing ever. I guarantee you that if I mentioned Billy Bear to any of my friends, they’d all have fond memories of it.”

And so, long story short: The meat clown isn’t the ghoulish nightmare the internet would have you believe, but merely a roll of meat with a face. European children pluck and eat its eyes and mouth before wearing the grisly leftovers in the manner of Ed Gein.