It’s a regular McD’s order, just with barbecue sauce and a celebrity endorsement. What the hell, it’s only $6 — bring on the diarrhea

If there is mystery to the new Travis Scott Meal at McDonald’s, it’s because 1) it’s become so popular that it’s frequently sold out, and therefore, hard to get your hands on; and 2) there’s nothing mysterious about it at all. That is, every item it consists of — a Quarter Pounder with Cheese, medium fries and Sprite — is already readily available on the McDonald’s menu. It’s ingenuity, or “lit”-ness as the McDonald’s marketing promises, seems to be in the very minor, Travis-Scott-dictated wrinkles — the bacon and lettuce atop the burger, the tangy BBQ dipping sauce for the fries, the potential to ask for extra ice with the Sprite. And perhaps the corresponding merch?

As our esteemed social media editor Alyson Lewis points out, “Typical that his meal would be repackaged menu items. That’s like his whole musical style anyway.”

Maybe, though, we were missing something. Maybe its simplicity was its genius. Maybe a Quarter Pounder with bacon transcended a Quarter Pounder without it (and even, bacon itself). Maybe French fries coated in tangy BBQ sauce should have always usurped ketchup. Maybe extra ice makes McDonald’s Sprite slap even harder.

Nick Leftley, Senior Editor: As much as I’ve ranted before about dumb fast-food innovations like the Papadia, the one thing I’ll say for those absurd culinary atrocities that pop up with the wearying regularity of slasher movie monsters (your Double Downs, your cheeseburger-stuffed-crust pizzas), is that at least their showy stupidity makes them somewhat worthy of acknowledgement, even if only to point out how awful they are. This? I have no idea what this is. It’s… a regular old McDonalds order? A burger, and fries, and a drink? I don’t know what I’m supposed to make of that. It feels like some vast in-joke that somehow made it out into the world with a multimillion-dollar marketing plan carelessly shoved up its sweater.

I do, however, have some suggestions based on this for other marketing opportunities Travis Scott may wish to engage in:

Anyway, I ordered it, it was gross (I haven’t eaten a McDonald’s outside of MEL taste tests since some time in the late 1990s, and as much as you think you like them, trust me, quit for a few years and you’ll wonder how you ever ate them). And, well, that’s it. Oh, except that they were out of regular Sprite (which, how?) so they gave me Tropical Berry Sprite instead, which tastes exactly like Tums, which was appropriate, because that’s precisely what I reached for right after eating this colossal waste of everyone’s time.

Hand Over All Your Fast-Food Needs to Travis Scott

Lauren Vinopal, Staff Writer: I intended to ingest my Travis Scott meal the only acceptable way I’ve been taught to eat fast food — while driving, which distracts both from my dietary choices and doubles-down on the overall recklessness.

Fortunately for everyone on the road, though, the Quarter Pounder topped with ketchup, cheese, onions, pickles and bacon appeared messy enough for me to pull over. I appreciated the simplicity of the burger and the bacon was crispier than I thought. Still, the glistening bun and perfectly-held-together insides (despite my concerns to the contrary), made it feel as though I was eating a display of food rather than food itself, and served as a reminder that I was really eating some synthetic imitation of the ingredients. Much like banana flavoring never fully tastes like the fruit itself, the seeds on the bun line up too symmetrically, the cheese is slightly too cheesy and the phrase “FRESH BEEF COOKED WHEN YOU ORDER” in all caps make it seem like the undercover cop version of food.

Fuck it, who am I kidding?

By the third bite, I was a completely different person who liked the burger. My only complaint is that I was dipping fries in barbecue sauce long before it was cool (humblebrag, I know). As I washed it all down with a Sprite that soothed my impending nausea, I had more fear and respect for the McDonald’s menu than ever before and would 100 percent trust Travis Scott with my Burger King and Wendy’s orders going forward, too. At the very least, for six bucks, it’s one of the more affordable ways to sedate yourself via food coma.

The Case of the Missing Barbecue Sauce

Ian Lecklitner, Staff Writer: I had a couple of serious problems with the Travis Scott Meal. For one, again, the only difference between the purportedly “lit” meal and a normal Quarter Pounder with Cheese meal is the addition of bacon, lettuce and a side of BBQ sauce, which is underwhelming on its own. But true to form, my local McDonald’s sent me away without the side of BBQ sauce, meaning the highlights of my famed Travis Scott Meal — the meal so popular that McDonald’s is experiencing supply shortages due to its release — were a couple slices of limp bacon and wilted lettuce. And so, I was left feeling mostly duped and bloated.

The Case of the Missing Travis Scott Meal

Miles Klee, Staff Writer: The McD’s a few blocks away from me is a drive-thru-only location, but as I pulled up to the order window, I saw a sign that read, in black Sharpie, “SOLD OUT STRAIGHT UP.” This, I knew, could only refer to the extremely in-demand Travis Scott Meal I was meant to try. On the off-chance I was wrong, I asked for one anyway, and confirmed that I was shit out of luck.

On a philosophical level, I wondered how this could happen with something that isn’t a true specialty item — surely their supplies of fries, BBQ sauce and Sprite were nowhere near exhausted. My guess is a bacon shortage did them in, or possibly even a glitch of the Quarter-Pounder burger patty supply chain, some higher-up failure to account for the success of this marketing gimmick. Or maybe these McDonald’s employees were justifiably pissed with corporate for dumping this viral headache on them as they continued to work through a pandemic, and unilaterally declared the Travis Scott special to be unavailable. If so, I salute them.

Choosing not to press the issue, I ordered some spicy McNuggets, which I had no idea the chain is now offering. I found them to have a pleasant heat factor and a far more satisfying crunch than the original product. So while my fast-food journey in no sense went as planned, and cost a great deal more than I hoped, I cannot say it ended in disappointment. Travis Scott Meal: (?)/10. Spicy McNuggets: 8/10.

The Case of the Missing Sprite

Do I blame Travis Scott for this? I went to the McDonald’s drive-thru around noon on a workday to pick up his special-menu-item meal, and it turns out that my local store didn’t even have the beverage. Undeterred, I opted for a Coke, paid my six bucks and change, and drove home. Regrettably, I did not listen to any Travis Scott either to or from the restaurant.

Honestly, since I hadn’t had McDonald’s in a while, it was nice to be reacquainted with the chain’s salty, cheesy wonder. The Quarter Pounder with cheese, bacon and lettuce (and so many onions) really is a marvelous fast-food burger. The way the ketchup and onion and cheese hit your taste buds at the same time? Just glorious. And McDonald’s fries remain the world’s greatest fries. Because this promotion came with barbecue sauce, I decided to use the entire container, putting it on my fries and burger. This was a very good decision, and I am proud of myself for my ingenuity.

Overall, the Travis Scott Meal was an utter delight. (A Coke tastes damn good with it.) And unlike Astroworld, it doesn’t go on forever. If anything, it was over way too fast.

The Taste of Monotony

Joseph Longo, Staff Writer: I walked a full mile to the nearest McDonald’s in Flatbush for this infamous burger. By the time I made it home, the fries were stale, the burger was soggy and my hot coffee was cold. (Big mistake with my drink choice here. Don’t be different. Get the Sprite.)

As one does now in the pandemic, I ate my lunch while doomscrolling through Twitter. About 10 minutes later, I pulled myself out of my extremely online coma and realized there was no more meal. I’d finished the entire burger and fries without once registering what I ate.

So what’s my review of the Travis Scott burger? It takes like any other McDonald’s Quarter Pounder — I think.

Maybe the Special Ingredient Is Community?

Quinn Myers, Staff Writer: Long before the pandemic hit, when McDonald’s paired with Uber to finally provide delivery in this country, they opted to center their marketing around the millennial and Gen Z semi-sardonic movement of “staying in.” Back then, people stayed in because they couldn’t afford going out, were too depressed to do so or both. Still, McDonald’s saw that as an opportunity to brandish their hot new delivery orders with stickers reading, “Aren’t you glad you stayed in?” and “Going out is overrated.” 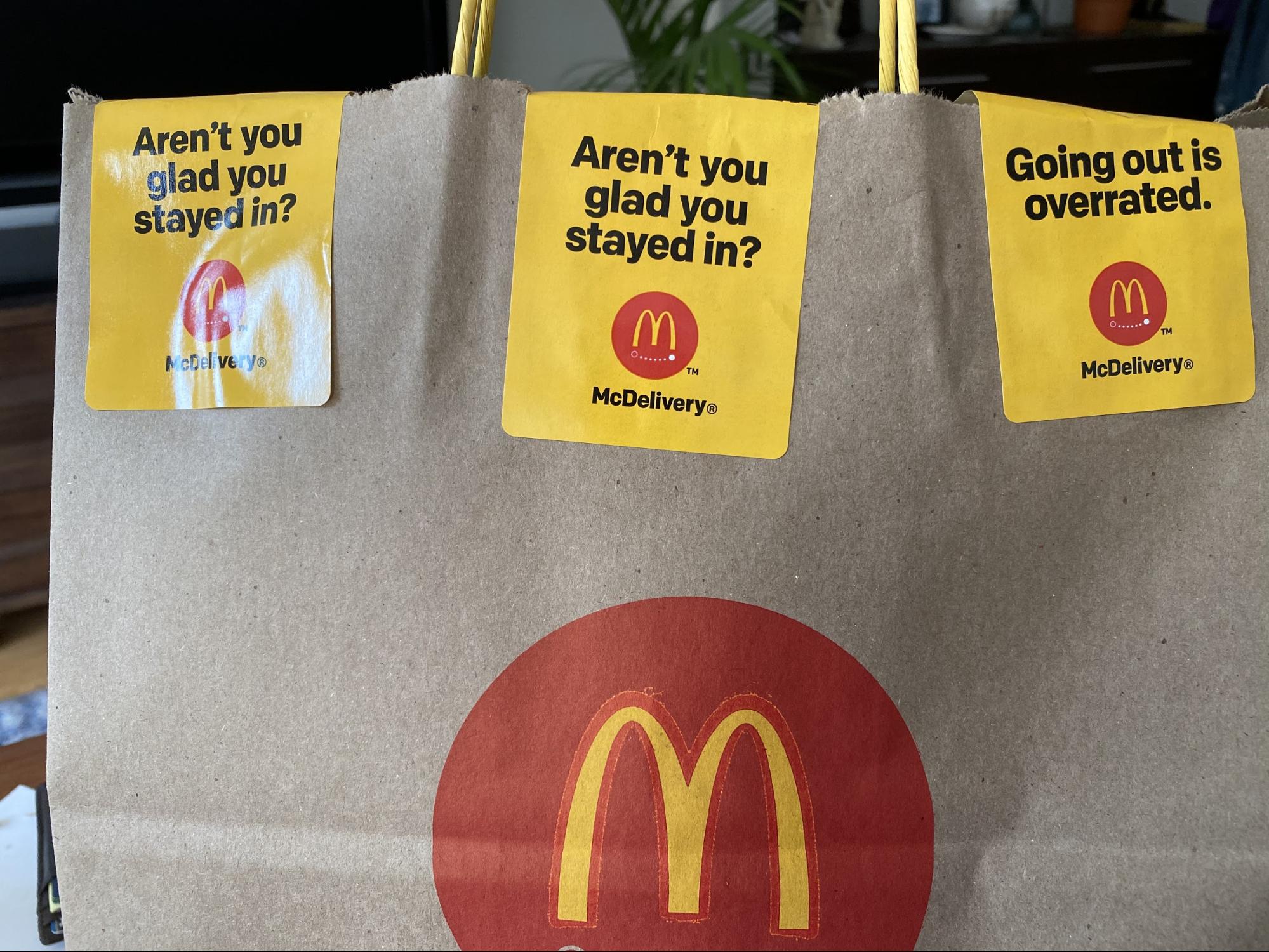 Well, that apparent void between McDonald’s marketing executives pulling the levers and those of us miserable wretches stuffing our mouths with their cheap food has produced yet another home run — sending droves of teens to local McDonald’s in the middle of a pandemic to wear thin their already exhausted workforce. This Travis Scott Quarter Pounder with bacon and lettuce has gone viral if only because people are so desperate to have some semblance of collective joy that we’ll eat this greasy piece of meat with soggy buns that… Okay, it looks pretty good: 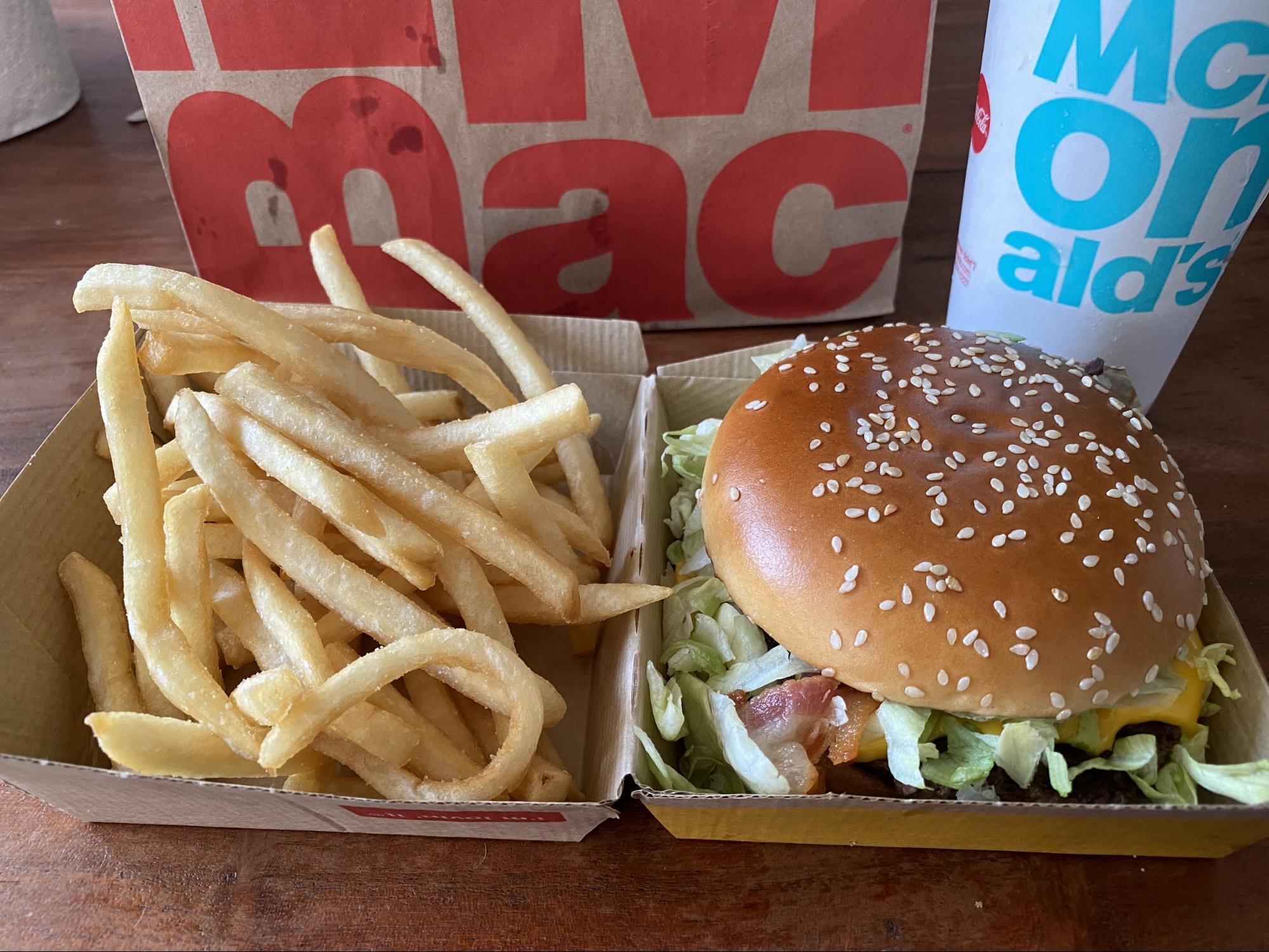 However, actually consuming this burger reminded me of why it’s been years since I’ve eaten anything that’s not a McNugget or ice cream from McDonald’s — while pretty tasty at first, within minutes of the burger entering my body, I felt like absolute shit. Looking back at the mess below, disgust and shame washed over me. 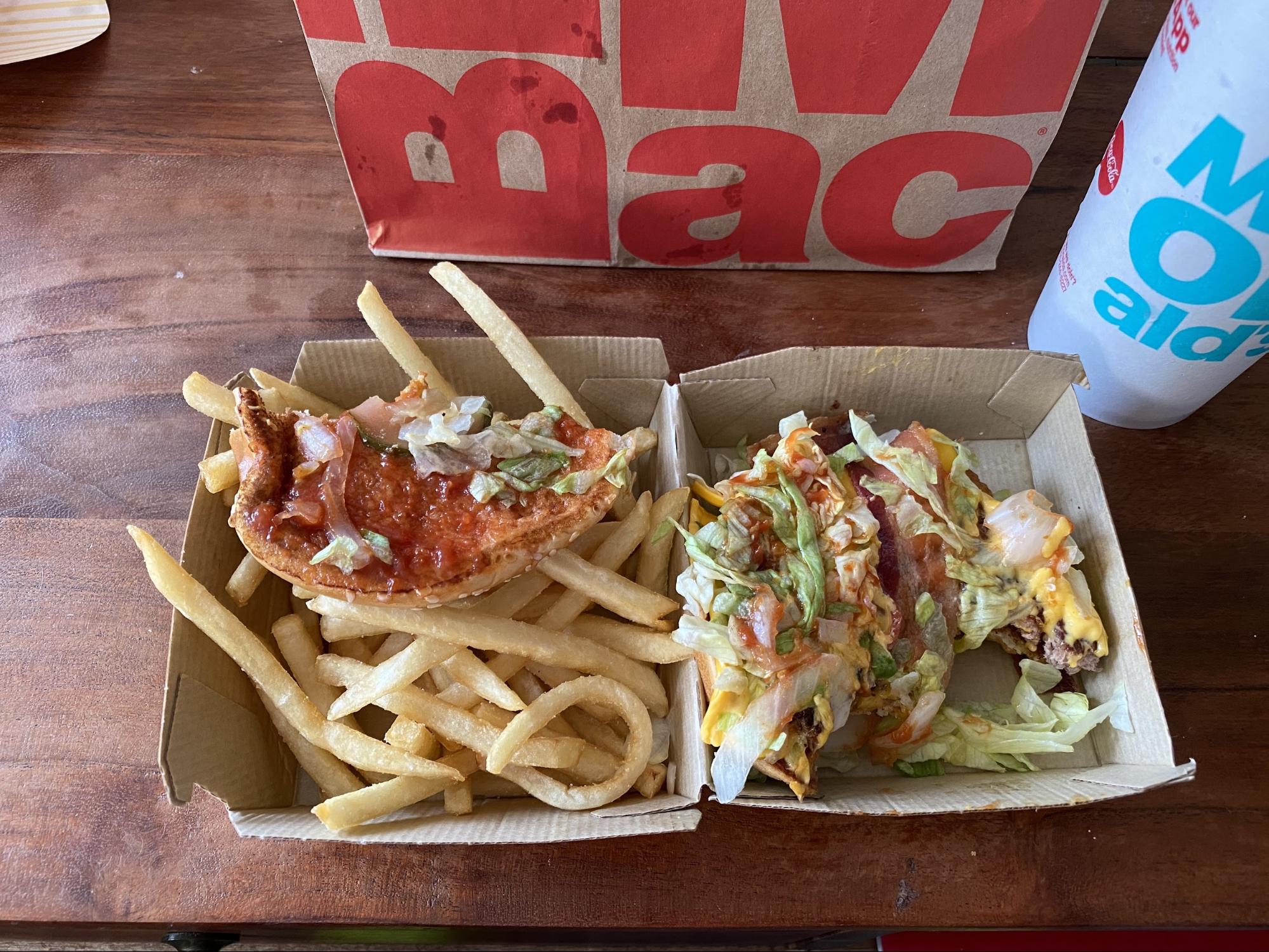 Like my fries, which were also left without their companion packet of BBQ sauce, I found myself feeling more alone than ever before. In a frantic search to feel anything else, I reached for the Travis Scott signature Medium Sprite with Extra Ice. Certainly a brain freeze from chugging extra-cold Sprite would overshadow my existential dread, I reasoned. Alas, the Sprite didn’t carry the requisite amount of ice, and I sunk further.

Then it dawned on me. This wasn’t about the burger at all. The Travis Scott burger is about feeling a sense of community again! People are coming together and celebrating life! Reinvigorated, I reached out to the only other human I knew who shared this Cactus Jack experience with me: 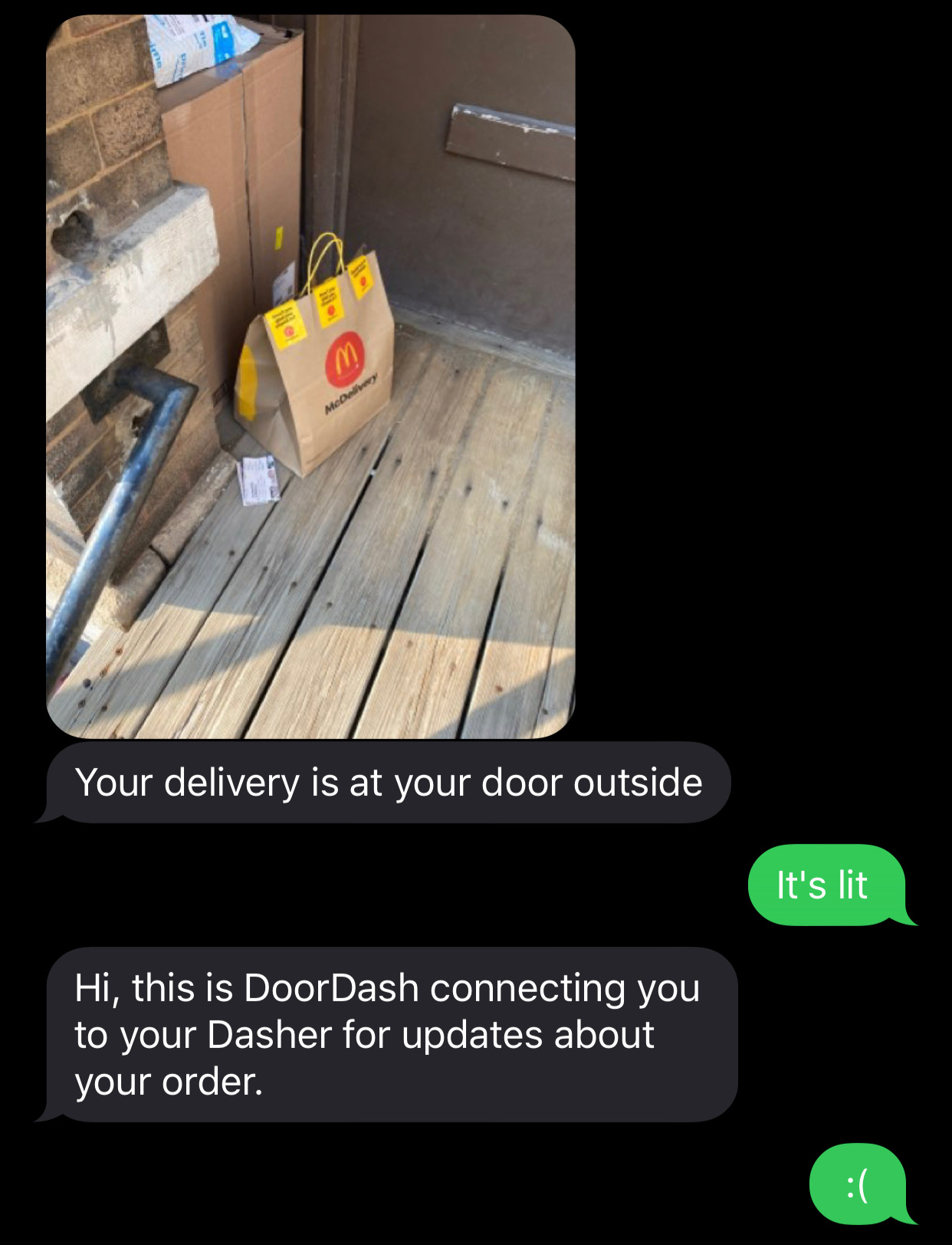 Maybe McDonald’s was right in the first place. Maybe going out is overrated.