DIY CBD Seltzer Is the Chillest Drink Hack of the Summer

It’s really simple to recreate a bougie-tasting Cann, Vybes or Recess CBD spritzer at home — for a quarter of the price of the trending brands

Remember the Great CBD Cocktail Boom of 2018? When you couldn’t go out to a bar crawl without seeing some guy in a leather apron dripping hemp oil on top of a whiskey sour for a $6 upcharge?

It felt sort of like a satirical gag in the ongoing gentrification — and corporatization — of marijuana. Here was a product completely divorced from the high of smoking pot, now championed as a kind of health supplement that also looks pretty when squirted into a glass.

CBD stands for cannabidiol, and it’s one of a multitude of cannabinoids that give pot its psychoactive and therapeutic traits. We’re only just starting to understand the spectrum of cannabinoids in marijuana and what effect each has on the human body. What’s clear so far is that CBD is non-psychoactive (unlike its more popular sibling, THC) but still holds a litany of medical benefits. It’s why CBD is used to treat stubborn, debilitating epilepsy in young children — it can be powerful in the right doses, but won’t get you “high.”

That’s great for the kids, but less so for adults who want to feel, well, something after getting a dose of CBD. Turns out, the thing that coaxes out and highlights the mental effects of CBD is actually THC; without the latter, CBD can just feel extremely subtle. The cause of death for the CBD cocktail trend is officially the government cracking down on the stuff, but I also think it has to do with people realizing that CBD doesn’t make sense as a purported boost for an alcoholic drink that completely overwhelms the compound’s mellow sensations.

Fast forward to 2020, and a different trend is rising: non-alcohol CBD beverages that claim to chill you out, with gorgeous graphics on their cans and aesthetic names like “Recess” and “Vybes.” My favorite of the bunch is Cann, which has become a breakout hit with mainstream potential thanks to delicious flavors like grapefruit-rosemary and a blend of 2 milligrams THC and 4 milligrams CBD. That little sprinkle of THC helps, in my opinion, Cann live up to its marketing as a “social tonic” that gets you a little faded but nowhere near drunk.

But, just like every other CBD drink on the market today, it’s wildly expensive. Cann is $24 for a six pack of little 7.5-ounce drinks. Meanwhile, Recess clocks in at about $5 per 12-ounce can. It’s basically the price of an actual happy hour gin-and-tonic somewhere, which is baffling considering we know exactly how much active ingredient is in a CBD drink.

I can personally attest, though, that it’s really simple to recreate a bougie-tasting CBD spritzer at home — for a quarter of the price of the trending brands and not much inconvenience. The biggest issue is getting high-quality CBD tincture, which is an extract made with oil, alcohol or glycerin. You can buy pure CBD tinctures online, but I strongly prefer a CBD-THC blend and fortunately have access to legal marijuana products in California — like Mary’s Medicinals, the one I chose for my DIY Cann. Recreating the flavor of Cann’s grapefruit-rosemary beverage is particularly easy, as the heavy lifting is done by an infused simple syrup. If you tried my hibiscus tea recipe, the concept is the same: Mix a cup of white sugar with a cup of boiling water, then stir in your chosen flavorings, in this case three sprigs of fresh rosemary and the peel of two limes, trimmed of any bitter white pith. Once that’s cooled into a syrup, all you need is a can of grapefruit seltzer and the right dose of CBD oil.

In my case, I grabbed a pint glass and squirted in the suggested dose of .25 milliliters, which instructions noted contains 5 milligrams each of CBD and THC. I added 2 ounces of the infused syrup on top of the oil, using a chopstick to swirl the mixture together. If you’re using an oil-based tincture, you may notice little droplets of fat not quite coalescing with the sugar-water mix. While there are ways to correct this (by adding a pinch of cooking emulsifiers like xanthan gum or maltodextrin), I really don’t think you need to fuss with it — just give it a strong mix. Next, I added ice, most of a can of seltzer, a squirt of lime and stirred it all together.

It doesn’t come in a pretty can, but in my opinion, it hits the same exact mark as pricey pre-made CBD drinks, both in flavor and “high.” I like the gentle, spacey feeling that kicks in about 15 minutes after drinking it down, and although CBD tinctures are most effective when dropped under the tongue and taken straight, there’s something pleasant about sipping a beverage with a relaxed pace instead. You can make all sorts of creative flavor combinations by toying with simple syrup infusions, different seltzers and fruit juices. I, for one, would like to test out pomegranate syrup, or maybe a dose of blood orange juice or a syrup made with fresh ginger. 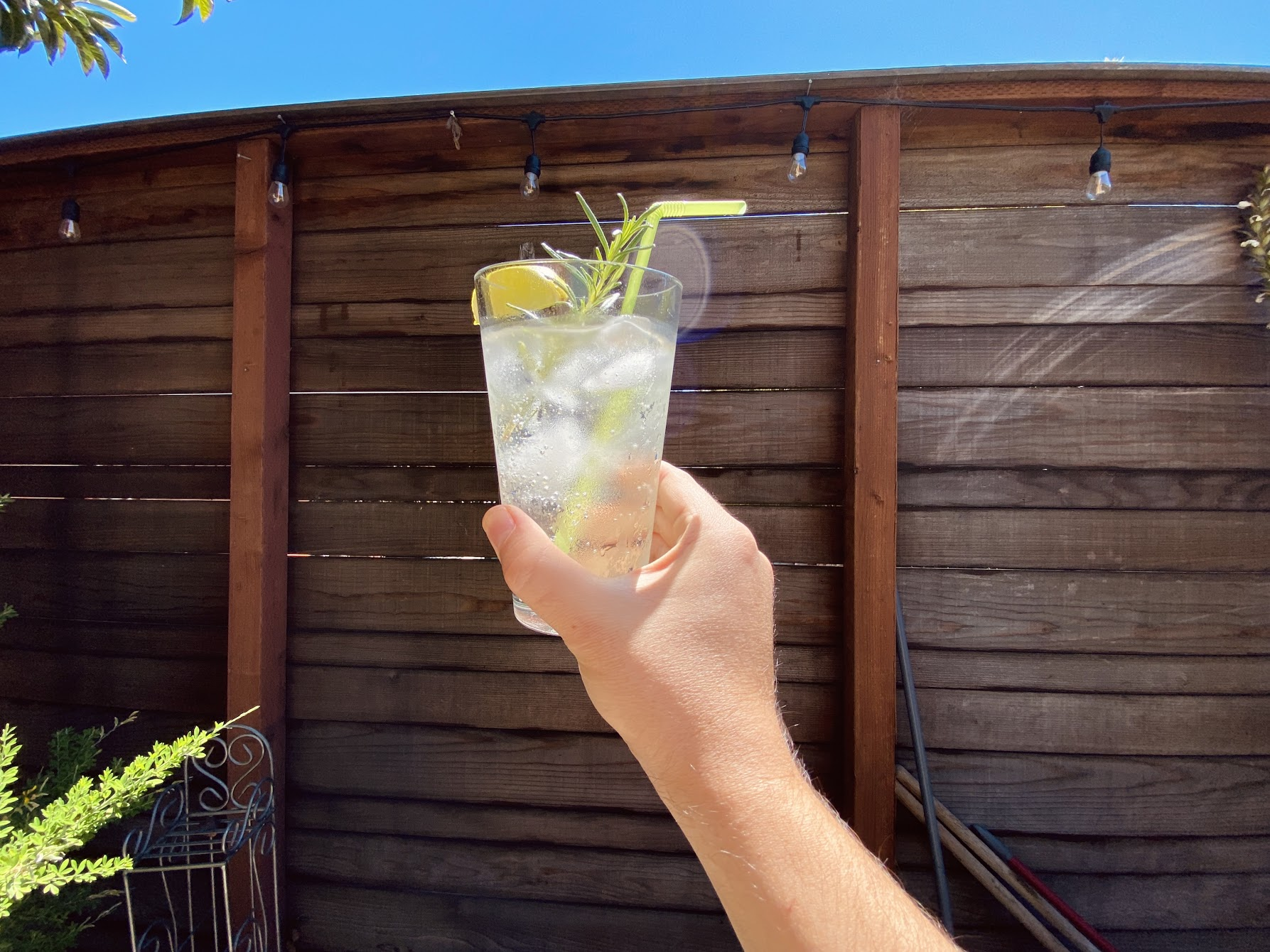 Best of all, the cost per “dose,” even using my top-shelf extract taxed at San Francisco rates, is about $1 or less. To me, $4 to $6 is closer to a treat than a daily routine. But a buck and some change for the whole drink? That sounds like a good deal.

With respect to the pre-packaged CBD drink brands, there really isn’t much ingenuity at all in this at-home hack. It just so happens that whipping up a refreshing, non-alcoholic tonic that still gives you a nice buzz is only one step more challenging than mixing a vodka soda.