‘Looking for Fun’ on Dating Apps Is Some Sadistic Shit

On both gay and straight apps, ‘looking for fun’ has become an ominous signifier of the criminally boring

Recently, in the waiting room of my dentist’s office, I found myself, as I often do, mindlessly flicking through profiles on gay sex apps. Not as a way to troll for dick necessarily, but more so because lately, I’ve been fascinated by the ways in which men on these apps choose to represent themselves to each other.

Gay hookup apps have developed their own language made up of a tangle of emojis, idiosyncratic slang and, of course, thinly veiled innuendos, all of which bleed out into their pictures, bios and DMs. The intricacies are endless, but also obvious — an eggplant emoji in someone’s display name represents a dick, and means they’re looking to top. A crystal emoji is an invitation to partake in/buy some methamphetamine.

But, there’s one particular word so common to the apps, so inane and so jejune that I haven’t been able to stop thinking about it: “Fun.”

“I love popcorn, being with my friends, the beach and having fun!” 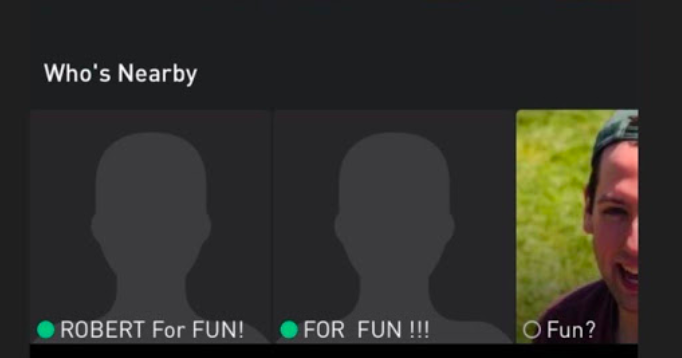 Is there any single word that could possibly hold less meaning? Is there a person in this world who would not claim to like fun? More importantly, is there a reason why “fun” has become the most frequently used euphemism for fucking on gay sex apps?

As I scrolled through these empty-headed entries, questions abounded. Unwilling to let them go unanswered, I promised myself I’d get to the bottom of this mystery — just after my dentist replaced my molar crown.

I started my research at the source — i.e., on the apps themselves. I searched through Grindr and Scruff for guys mentioning fun, even going so far as to download Tinder and set up a profile (which was harrowing, to say the least).

I swiped through endless earnest profiles of guys who “love fun.”

I sent “taps” and “woofs” and messages to guys on Grindr and Scruff with names like “Fun Top,” “Looking for Fun” and “Good Guy for Fun.”

I did it all, and let me tell you, my findings were bleak.

On Tinder, where everybody inexplicably looks like a Property Brother, “fun” is something that you add to your profile as a dismount to the omnipresent list of hobbies. It’s something to suggest you’re not a weirdo, just as loving dogs, eating pizza, going hiking, and for some reason, enjoying bourbon, have become signifiers of inoffensive and normal people. “Fun” is everything and nothing. “Fun” is immaterial and amorphous, and yet, for Tinder users, it’s vitally important to round out the picture one presents to the world as “sane, chill and LTR-oriented.”

On Grindr and Scruff — where no one looks like a Property Brother — “fun” was also a placeholder word, but for different reasons. When I asked people what it meant to them, most of them replied with a list of their preferred sexual practices — eating ass, sucking dick, fucking, 69, kissing and so on. It was a stand-in for normal, garden-variety gay sex, and talking to these so-called “fun” guys left me bored as hell.

Still, I was undeterred by their surface-level answers and endeavored to push them harder. When I asked why he employed the euphemism, Scruff’s “Fun Man NYC,” a 56-year-old who bravely chose to wear a sweater vest in his profile picture, he replied, somewhat excruciatingly, that “someone just suggested it.” It meant “nothing” to him, and he was sure that “99 percent of people didn’t read it.”

His answer had signifiant undercurrents of defensiveness, and I wondered if the banality of “fun” was his way of masking the self-consciousness a man in his 50s could so easily fall prey to on these demonic apps.

Next up: “Fun,” a tan, smirking, fortysomething on Grindr. He purported to be looking for “Fun. Naked. Fun. 3way,” and had a similar response to Fun Man NYC. “It’s just open-ended,” he said. “It invites [conversation] to see what’s on a boy’s mind.” Then he sent me a minute-long video of him fucking a faceless twink.

It seemed, at least from these fine fellows, that fun-seekers knew it meant nothing. It was a slick, glossy word that offered potential mates little to latch onto, and its draw was in its ambiguity, which, for some reason, they found desirable.

It occurred to me, in my quest to understand the fleeting and infinitely mutable nature of “fun,” that my scope may have been too narrow. Perhaps the pool of gay men I was interrogating weren’t allowing me to see the full picture. So for my next trick, I recruited my two straight friends to see if “fun” occupied a different space in the murky waters of heterosexual digital dating.

“I generally take it as a sign that they’re a dumb person and not very interesting,” Maggie, a 26-year-old D.C. resident and seasoned app user, writes via text. “I’ve just seen it as like, ‘Wow this person is fucking basic if that’s all they can say about themselves.’”

Some part of me had assumed that “fun” was just a euphemism in gay circles, but if straight people are using it too, its cultural etymology must be deeper than I thought. But if “fun” as a nothing-word isn’t unique to the homosexual experience and we all consider it meaningless, why do we use it so often?

For some definitive answers, I turned to amateur hookup guru Jesse, another friend of mine who spends way too much time on dating apps. Jesse, you should know, isn’t a professional. He’s just a Guy Who Fucks™, but I knew he’d have something wise to add. “It’s an effort to protect oneself from committing,” he says, sagely. “Rejection is a real fear on sex apps. Any sort of vulnerability invites a rejection. If you say you’re looking for fun, who can reject that? It’s so vague.”

What’s more, he adds, it’s a sign of laziness. “They’ve seen other people write ‘looking for fun’ on their profiles,” he theorizes. “They know it’s a space-filler, and they don’t really care.”

But what about people that deem themselves fun? For some, it isn’t just something they’re looking for — or something they enjoy — but a word they use to define who they are. When they look in the mirror, they are Fun Top. In that context, could that also be another means of eschewing vulnerability?

“By saying that you’re a ‘fun top, or bottom, vers, etc.,’ you’re insinuating that there exists a not fun top, and even, perhaps, that many other tops aren’t fun,” Jesse continues. “People call themselves ‘fun tops’ to delineate themselves as someone who’s exciting, who has ideas, who’s fun. So, then, chances are if you call yourself a ‘fun top,” you’re probably not. You’re reaching toward an aspirational kind of fun.”

In other words, deeming yourself “fun” is more about declaring what you aren’t than what you are. What a fascinating paradox it is, then, that the very moniker someone chooses to declare themselves a fun and exciting person has the exact opposite effect on their audience (namely, me).

It all comes down to vulnerability and fear in the end, as so many things do. But I shouldn’t lose all hope — one conversation I had in the midst of my field research was a searingly bright spot in the dreary swamp of “fun” guys. One man, at the very least, knows the true meaning of fun: 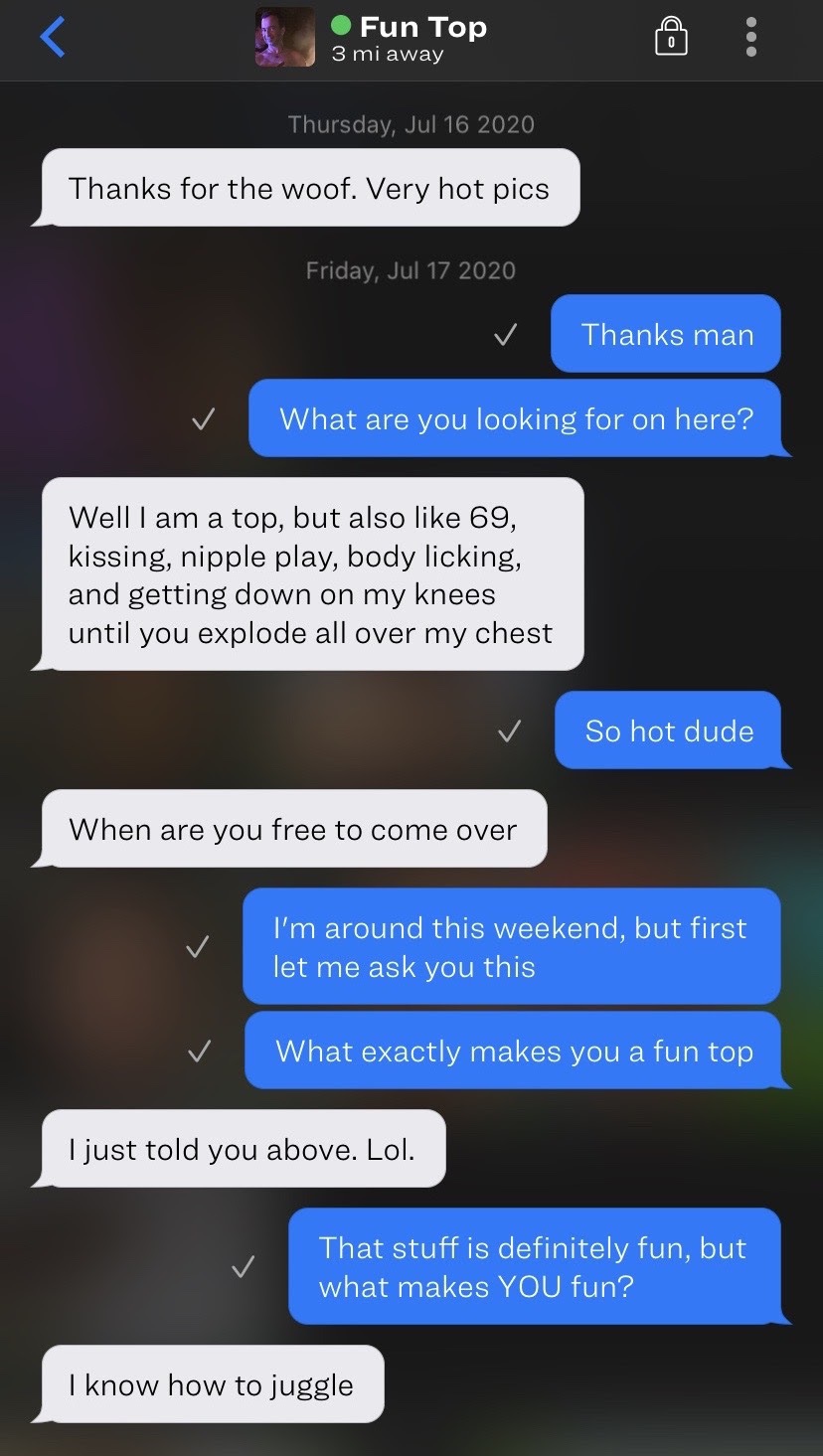 Sam Stone is a Brooklyn based writer who focuses on culture, entertainment, food, humor, and gay shit more generally. His work has appeared in McSweeney's, Slackjaw, Points in Case, and various other corners of the internet.