Literal Cow Boys: The Men Who Keep Cows As Pets

‘Honestly, you don’t pick a pet cow. It chooses you.’

The myth of the American cowboy is in the image of a self-sufficient man in a lawless land — soft-spoken, reliable and comfortable in the silence. In the wilderness, a cowboy’s best friends could have only been his thoughts and the herd in front of him.

Good thing, then, that cattle have distinct, wonderful personalities that become visible to anyone who spends enough time with them. We’re a long way from the 19th-century peak for cattle drives across America’s heartland, when upwards of 59 million cattle were moved by men on horseback from Texas to Kansas and beyond. But while cowboys aren’t so ubiquitous in the 2010s, many men still find out, one way or another, that a cow can be much more than a source of meat and money. For the literal cow boys who raise and care for a pet cow, spending time with these massive animals feels pretty much the same as having a family dog.

I spoke to three men who, from a young age, worked with cattle and learned that they’re sensitive animals who often tout an affectionate streak. These cowboys never intended on having pet cows — but they can’t imagine anything better now.

My family is all beef farmers. My father, my uncle, my grandfather, it runs for a lot of generations. As a young man, I went away from it a bit, but returned to it and made it a career. I suppose it’s in my blood — you never really get away from it. I thoroughly enjoy working with cattle, and I’m still excited to wake up every day.

Growing up in this world, I’ve always bonded with cows, and I had pet cows all through my childhood. For people who don’t understand it, I just say they’re like big dogs. They’re really, really docile and affectionate. I had one cow who would kiss me every single day. It’s unbelievable. We’ve always had dogs as pets, too, and a cow just seems like a large version of that.

The hard part with a pet cow is when they start to get a little too friendly, and they start pushing you around a bit. A dog can run up on you in a hurry, but if a cow does it, it can be dangerous. A small nudge can hurt! It’s not something that you can train out either — a cow will bump you if it wants to [laughs]. It’s also funny to think about how stubborn they can be. A pet cow, more than a non-pet, if you will, has a mind of its own. You’re not going to make an animal that size obey unless it wants to.

Even though I’m a beef farmer, it’s difficult with any of the animals when they go to slaughter. I’ve grown more used to it, but it always hits hard. The way I deal with it is that, these cows that are born with me, I just make sure that they get good treatment and they’re happy. If it’s a pet cow, obviously it’s even harder to let them go because of age or sickness or whatever. Honestly, you don’t pick a pet cow. It chooses you. 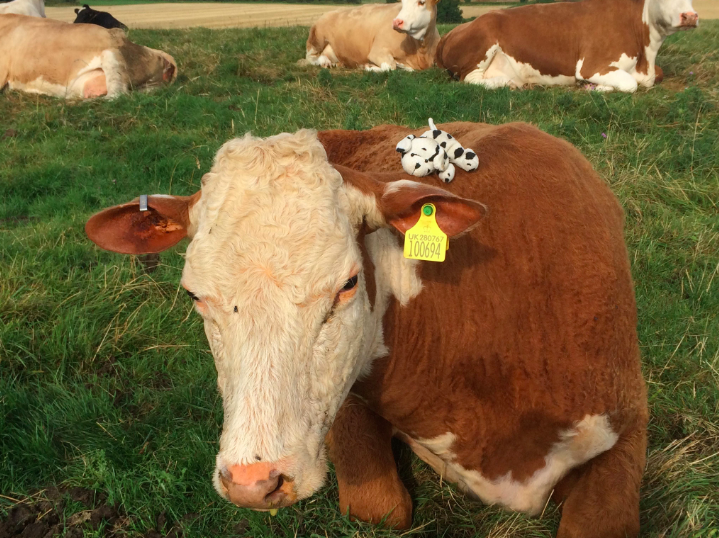 We notice it from a young age, because certain calves are just more cheeky; they’ll come up straight away and lick your hands. Naturally, the sons and daughters of a pet cow also tend to learn from their mothers. They see the mom getting stroked, and they become more and more inquisitive about it. Also, when an animal is doing poorly, we tend to mother it a bit more and take close care of it. Bonding can happen then, too.

Miracle is an example of that. She was born deformed and wasn’t supposed to survive. She had like 12 hours to live. She had a bad underbite, and it looked like a bad situation. But as I was taking her to the vet, she started suckling on my finger. And I said, “If she can suckle, then I can give her a real chance.”

Her birth defects made it impossible for her to have a calf, but she became a pet. We bottle-fed her and kept her because, after a certain point, she was just a bit of a legend. She was sort of normal size, but looked odd. She was born with very patchy hair, and I used to put sunscreen on her! But we’ve used her as a surrogate mum, since she took to looking after calves very easily. Bless her, she raised two calves for us. 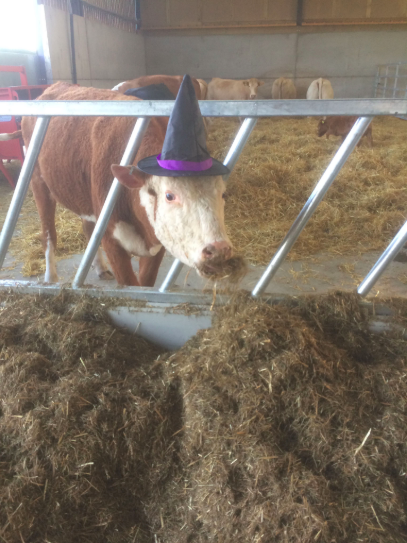 People in the village knew her, and she’d run up to them like a big dog. She was only three and a half before we had to put her down — she got injured badly. People still talk about her today, and I think of her all the time. My company is named for her, after all. I don’t know why she fell into my life. But she had a will to live, and I wanted to help.

Vince: I got into livestock in high school, as part of a 4-H group, when I’d show different animals. It was just part of growing up, and raising animals was something that a lot of people did. When I got older, I actually met a guy who had two Watusi cattle. I’d always wanted one, so when I found out he was going to have a calf, I told him that if it’s a bull, I wanted to try and train it. That was the first Watusi I ever got, after seeing one for the first time in 1985. I thought it was incredible — their horns are so massive, and they’re beautiful animals. 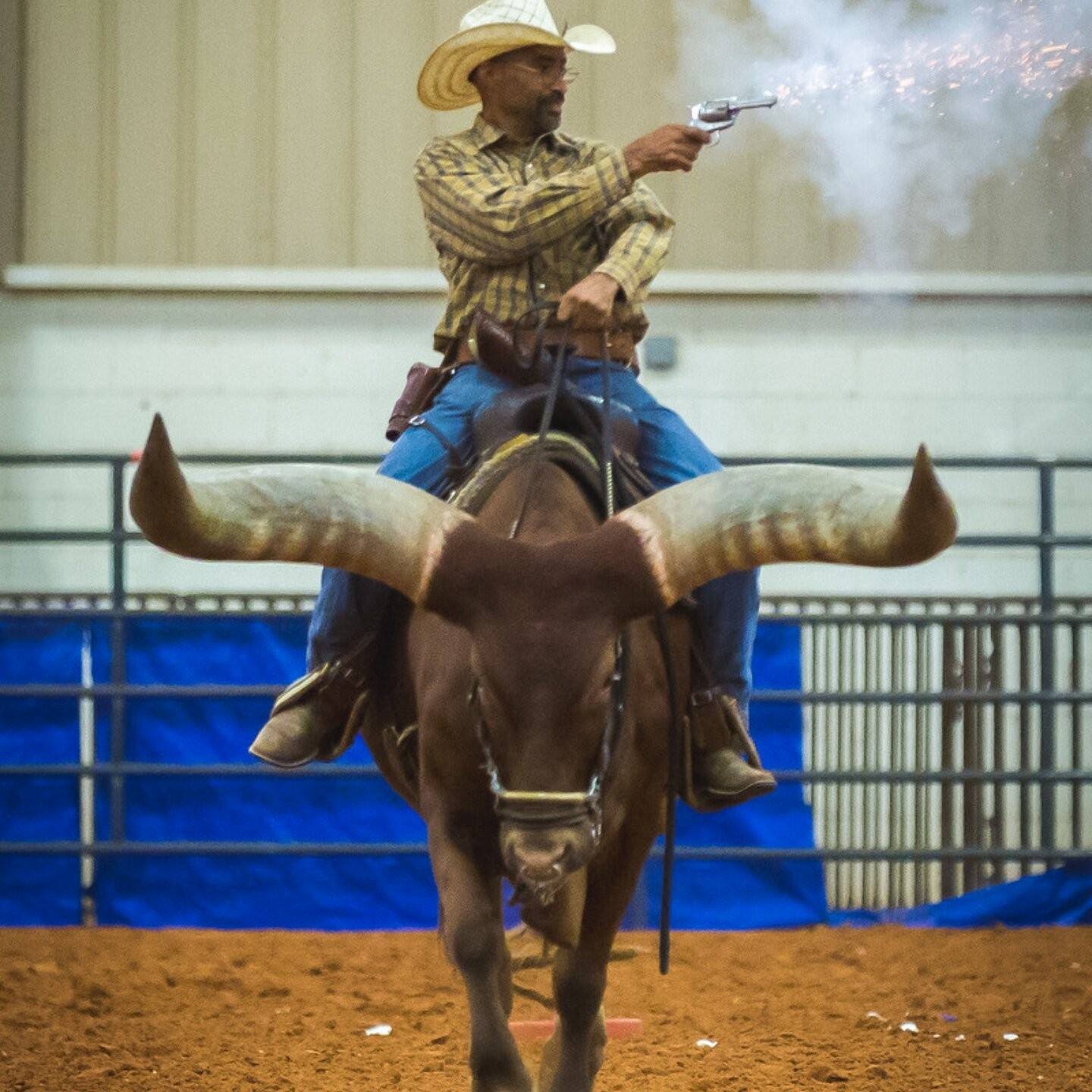 They look pretty intimidating, but Watusi, like all breeds, can be quite gentle. The more you work with them, and if they’re raised around people, they can be much more docile. I worked with Oliver from a very young age. He took to the training pretty good. He’s given me new experiences after all these years, and I think he views me as a best friend.

Michelle, Vince’s wife: Or a father. Their bond is very unique. You definitely won’t see it anywhere else, not with an animal like that. If Vince walks off, Oliver will stand there looking for him. You can see it in his eyes: He wants Vince around him at all times. He’s 15 years old, and he’s been that way the whole time.

Vince: I noticed the bond from a pretty young age, when I’d take him to events to show him. Whenever I had to leave to use the restroom or something, if I was gone too long, Oliver would start hollerin’, making a fuss to everyone around him. The funny thing is, he tolerates pretty much everybody, but he doesn’t like everybody. A lot of kids want to pet him wherever we go, and I joke to them that they have to let him sniff their hand, to test whether they’re a good kid or a bad kid. In reality, there’s only a very few people that make him huff and back up.

Michelle: I’ve seen people offer a lot of money for Oliver, enough money for Vince and us to live a completely comfortable life, but he’s never taken an offer. He loves Oliver that much. And what Oliver does for Vince, he just won’t do for anyone. I wouldn’t even try myself to go out there and put a halter on him.

Max: We raise beef cattle, and our son, who was attending college and working as a ranch hand, received two calves from the rancher he worked for. Their mother died shortly after giving birth to them, which were named Thelma and Louise. He brought them home and raised them as what we call “bucket calves” — feeding them by hand with a baby bottle that’s the size of a bucket. Louise ended up dying, but Thelma survived, and when she was 3 years old, we turned her out with the herd, and she was bred.

She just kind of seemed like a pet from the start, because she was a bucket calf, but cows all have their own personalities. It’s fun to see them interact, both with each other and with us. But Thelma had a distinct identity — kind of a grump, actually, and a bossy cow [laughs]. I think I like that about her. Thelma always could find us; she’d be the first one at the pickup. She’d lick you upside the head if she wanted, get real close to ya.

Barb, Max’s wife: She just kind of grew on us over time, and it coincided with our son being killed in a car accident nine years ago. It was shortly before she calved, with her first. Because of the circumstances and the timing, she became very special to us.

Max: I did raise a cow myself as a bucket calf when I was young, like 40 years ago, and she was very special. I also had a bull back then that weighed probably 2,200 pounds and had big ol’ horns. Despite his size, every day, he’d come out and wait for me to scratch his back. Thelma has a lot of silly habits like that. Her favorite thing is probably when I’m caking the cows — feeding them this special “cake” that runs from a spout while I drive the truck. She’ll just stick her mouth on that spout, running beside the pickup with cake spilling everywhere, until she gets so much in there that she’s forced to chew.

Barb: Thelma’s the only one of our cows that grew horns, and she’ll use her horns to her advantage when she eats. She’ll push the other cows out of the way with them.

Max: But my favorite part is when Thelma has her babies. She’ll come right up to me and lead me to them. A lot of cows, they won’t let you get anywhere near their calves. But Thelma wants to show them off. Three years ago, she even had a set of twins — a boy and a girl. A lot of times, a mother cow won’t accept both of them, but Thelma did. She was real proud, and we could walk right up to her babies and it didn’t bother her none.

She’s 11 or 12 years old right now, and this is about the time when you’ll cull them, age them out, but not Thelma. She won’t be sold off once she gets old. We’ll keep her here, and she’ll do whatever she wants. When she dies, she’ll be buried here.