Can Leo Save the Pangolin? DiCaprio Battles Organized Crime in a Movie-Worthy Trafficking Saga

Wildlife smuggling is a multibillion-dollar industry controlled in part by multinational crime syndicates. One powerful global figure on a crusade to halt it: Oscar-winning actor Leonardo DiCaprio

The illegal shipment was intercepted on its way to Vietnam. The smugglers were Vietnamese nationals tripped up by the Ugandan authorities. Their smuggled contraband had been shipped into Uganda from neighboring South Sudan, although the Ugandan authorities were convinced it originated in the Democratic Republic of Congo, a common smuggling route.

There were three freight containers in all. Behind a false front of lumber, the Ugandans discovered what they were after — elephant tusks and pangolin scales by the ton, a confiscated haul valued at $3.5 million.

Similarly, in 2019, authorities in Singapore seized a shipment of smuggled wildlife contraband shipped from the Congo, which, again, was headed to Vietnam. It, too, was a mix of elephant tusks (8.8 tons’ worth) and pangolin scales (11.9 tons’ worth). The total cost: Roughly $36 million, 16,000 dead pangolin and 300 dead elephants. It was the third major seizure of smuggled pangolin scales and ivory in Singapore that year alone.

Elephant tusks and pangolin scales are often shipped together from Africa. The reason is simple: Smugglers know the two wildlife products are typically headed to the same black markets in Asia. That said, when bundled in African countries like Benin, Kenya, Cameroon or Cote D’Ivoire, shipments of pure pangolin scales are still lucrative enough for organized crime to make steep profits from them without any ivory. And so, the smugglers bag up pangolin scales and ship them off on their own, much the same way cartels smuggle cocaine.

Today, wildlife smuggling is a nearly $25 billion industry run in part by multinational organized crime syndicates, many of whom are also drug traffickers and militants in need of black-market funding. Still, wildlife trafficking largely remains in the shadows, mostly because combating it isn’t a priority to any of the many nations involved. This also means, if current depopulation trends continue, the endangered pangolin is headed for certain extinction in the next two decades (or less).

What exactly is a pangolin, you’re probably asking yourself?

Imagine if an anteater and an armadillo had a love child. That’s a pangolin. 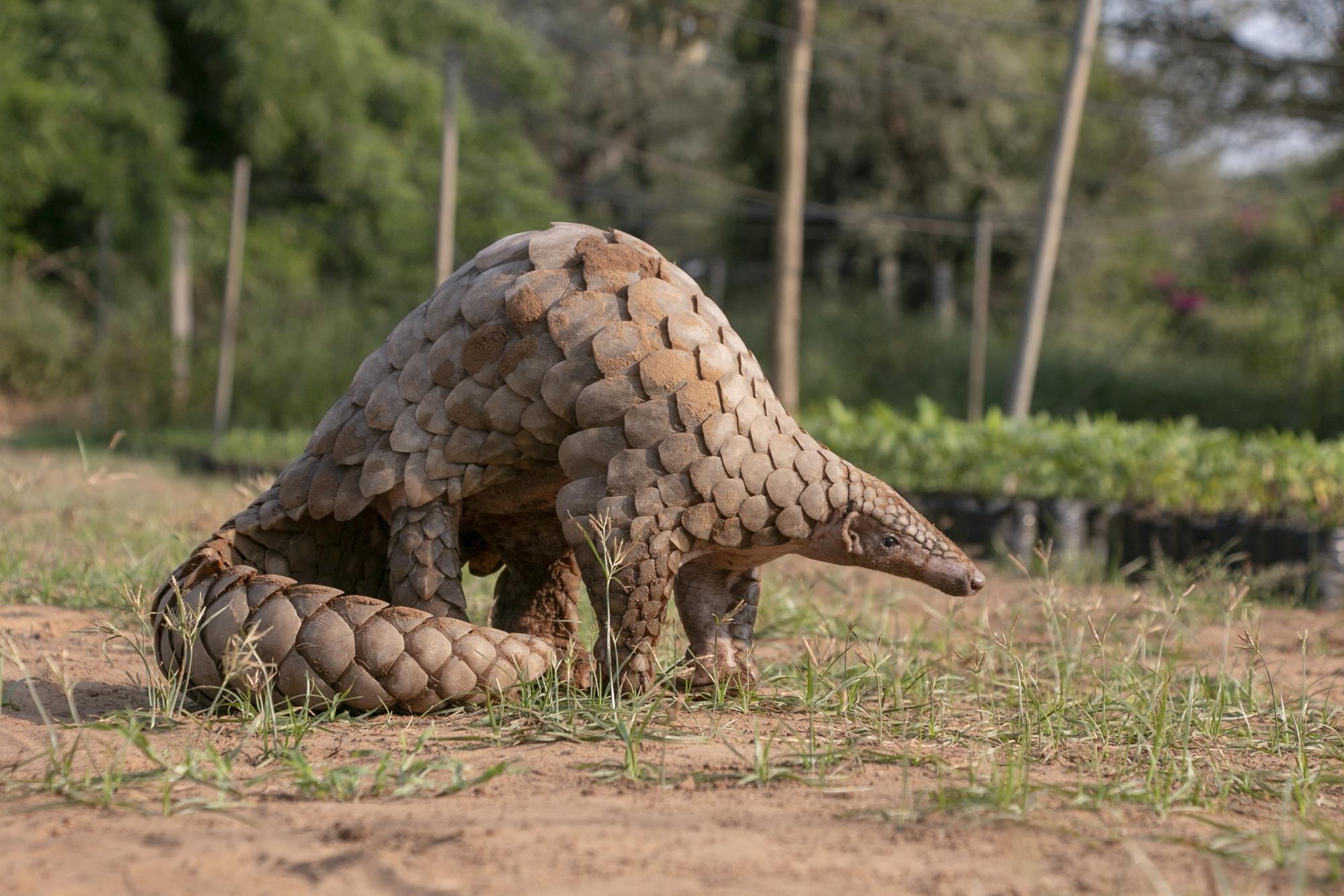 There are eight species of pangolin (all of which are endangered) — four from Asia, and four from Africa. Its meat is considered a delicacy. It’s also highly valued for its keratin-based scales, which are considered a cure-all in many traditional Asian medicines and used to treat a wide range of illnesses and conditions (from high blood pressure to limp dick). In Africa, however, pangolin scales were previously considered a waste material, and generally thrown away. But now, thanks to unquenchable demand from Asia, the former trash has become quite a treasure, especially for crime cartels. As such, today, one pangolin is killed every five minutes.

Luckily, though, all is not completely lost for “the world’s most trafficked mammal.” There is one powerful global figure on a crusade to rescue it from the clutches of wildlife traffickers — Oscar-winning actor Leonardo DiCaprio. He’s been steadily fighting to save Pangolins since at least 2016. If anything, the ardent environmentalist has made it something of a personal cause. 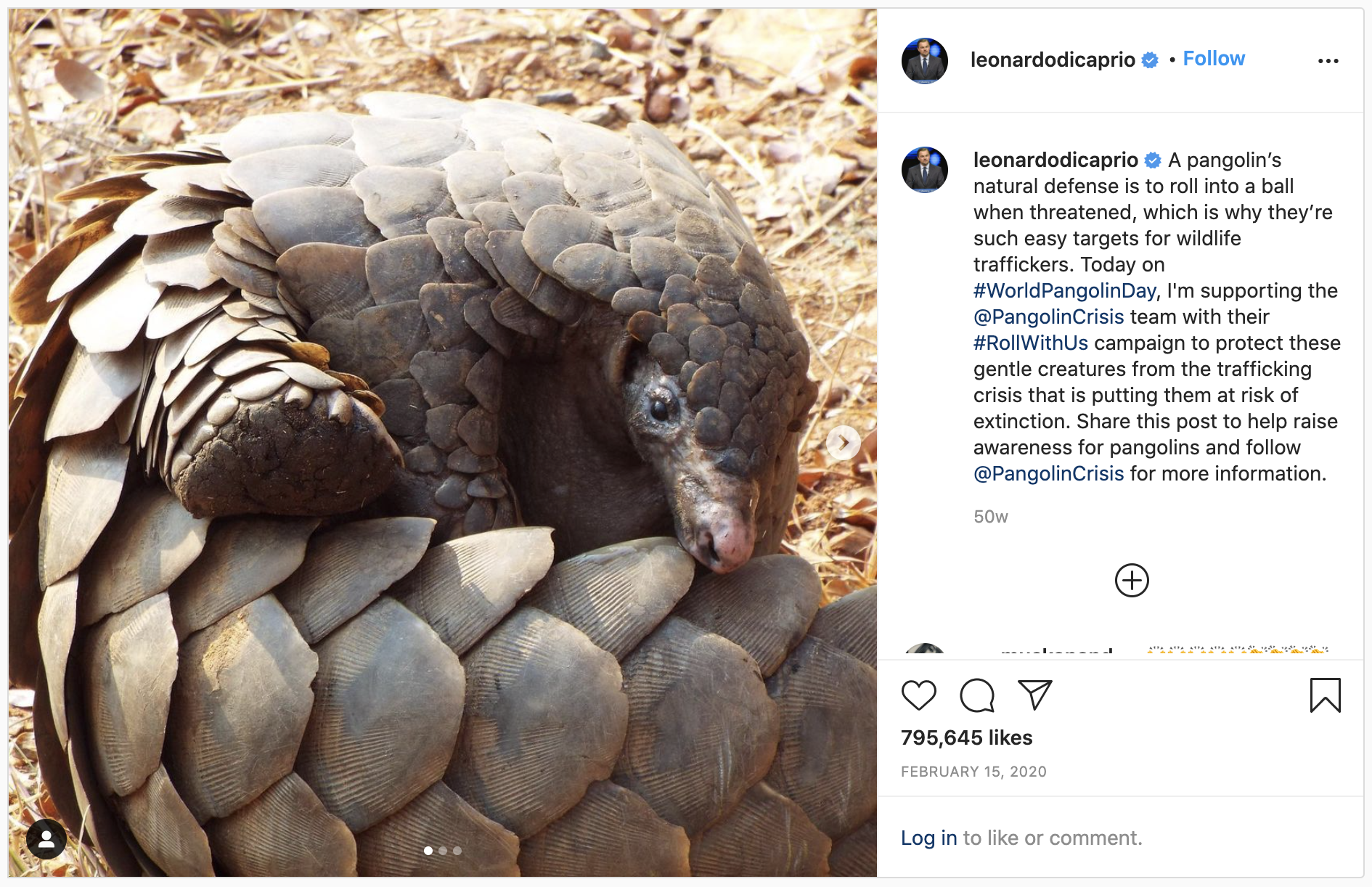 In particular, his eponymous environmental organization has partnered with Save Pangolins to create the Pangolin Crisis Fund. Together, they’ve committed to eliminating “the demand, trafficking and poaching crisis that puts pangolins at risk of extinction, and to also raise awareness of this little-known animal.” To aid in those efforts, they’ve also enlisted the help of the Wildlife Justice Commission, an organization that conducts undercover investigations to reveal the criminal trafficking networks that smuggle wildlife, as well as the Environmental Investigation Agency. As a combined force, they’re taking specific aim at financial crimes like money laundering that are necessary to operate vast smuggling networks (putting their trust in the old adage, “follow the money”).

As these numbers indicate, in the past, conservation efforts have primarily focused on poachers and smugglers (i.e., the little fish). That’s akin to trying to win the War on Drugs by busting the corner dealers and their lookouts. Any nation that intends to fight wildlife crime must be more innovative than using law enforcement as a big stick. Which is why DiCaprio and company are advocating for shifting the focus from small players to the big bosses who profit the most from meeting the illegal demand. Besides, if we’ve learned anything over the years, it’s that you’re far more likely to bust organized crime operations with accountants than more cops and guns.

In fact, the pangolin’s other big celebrity defender — Prince William — has been arguing this for a while now, suggesting that to save the planet’s wildlife, nations must engage in an “Al Capone strategy.” Which, again, is pretty much the same call as DiCaprio’s: Follow the money.

All of which is to say, the fight to save pangolins from extinction has drawn together some rather strange bedfellows — a Hollywood icon, a prince, Asian crime families, African smuggling networks and corrupt law enforcement. Or to put it in movie terms, it’s sorta like if John Woo had reimagined The Freshman.