Some say you can’t be sexual while pregnant. Lena the Plug said keep the cameras rolling

Lena is a porn pro. (A former co-worker gave her the nickname “Lena the Plug” long before her entry into the adult world in 2016, referencing her well-connected status as a “plug” who has “everything you need.”) The petite brunette currently rakes in around seven figures a year thanks to her millions of followers across YouTube, OnlyFans and social media. Like many adult content creators, she saw a spike in her income during the height of the pandemic as fans were forced to jack it in isolation. Only unlike them, Lena’s big payday seemed to coincide more with her pregnancy than the pandemic, as she continued to shoot semi-acrobatic content until late in her third trimester.

Some of her followers even expressed outdated (and medically unfounded) concerns about the baby’s health, worrying that some of her more boisterous sex acts could harm her fetus. “So many people believe that having sex when you’re pregnant is dangerous,” Lena says, laughing as she points out that her midwives actually recommended vaginal penetration as a way of spurring labor when her due date came and went.

Criticism aside, Lena says that her pregnancy coincided with her most financially successful months to date. She’s not entirely sure if the boom was due to her pregnant body, or again, just a reflection of the demand for porn at the height of the pandemic. Still, she tells me that she set a personal income record mid-pregnancy, making around $100,000 in a single day. “The pandemic was really good for all sorts of entertainers,” she explains. “I made more money during the pandemic than I’d ever made, because people had such a need for that content. I did lose a few subscribers, but I also gained subscribers who were really into [my pregnancy], so it kind of balanced out.”

Now, Lena is nearly a year postpartum and fully sans baby belly, but she’s still trying to reconnect with her body. “I don’t feel totally like myself,” she says, echoing the same sentiments many women have after giving birth. “I used to masturbate every day, and now it’s such an afterthought. I’m so exhausted and out of touch with my wants and needs; I’m breastfeeding like a cow all the time. It’s hard to feel like my body is mine at the moment.” That sense of uncertainty makes her job even more of a grind, especially now that she’s attempting to juggle her mom persona — curating her Lena the Mom Instagram and posting tours of her infant’s nursery on YouTube, for example — while contorting herself into a pretzel and annihilating her partner’s dick for the camera.

Sexual uncertainty is also a common sentiment in the postpartum community, with entire blog posts (and peer-reviewed studies) dedicated to reconnecting people with their post-baby bodies. But while postpartum sexuality is a very real issue, it’s rarely discussed so publicly, especially among porn performers. That transparency is the appeal for Lena’s fans, many of whom are pregnant or recently postpartum themselves. After she posted about her traumatic birth experience on Instagram, followers flooded her comments with their own stories. “My birth experience was almost exactly the same,” wrote one commenter. “It’s so nice to know I’m not alone,” wrote another. 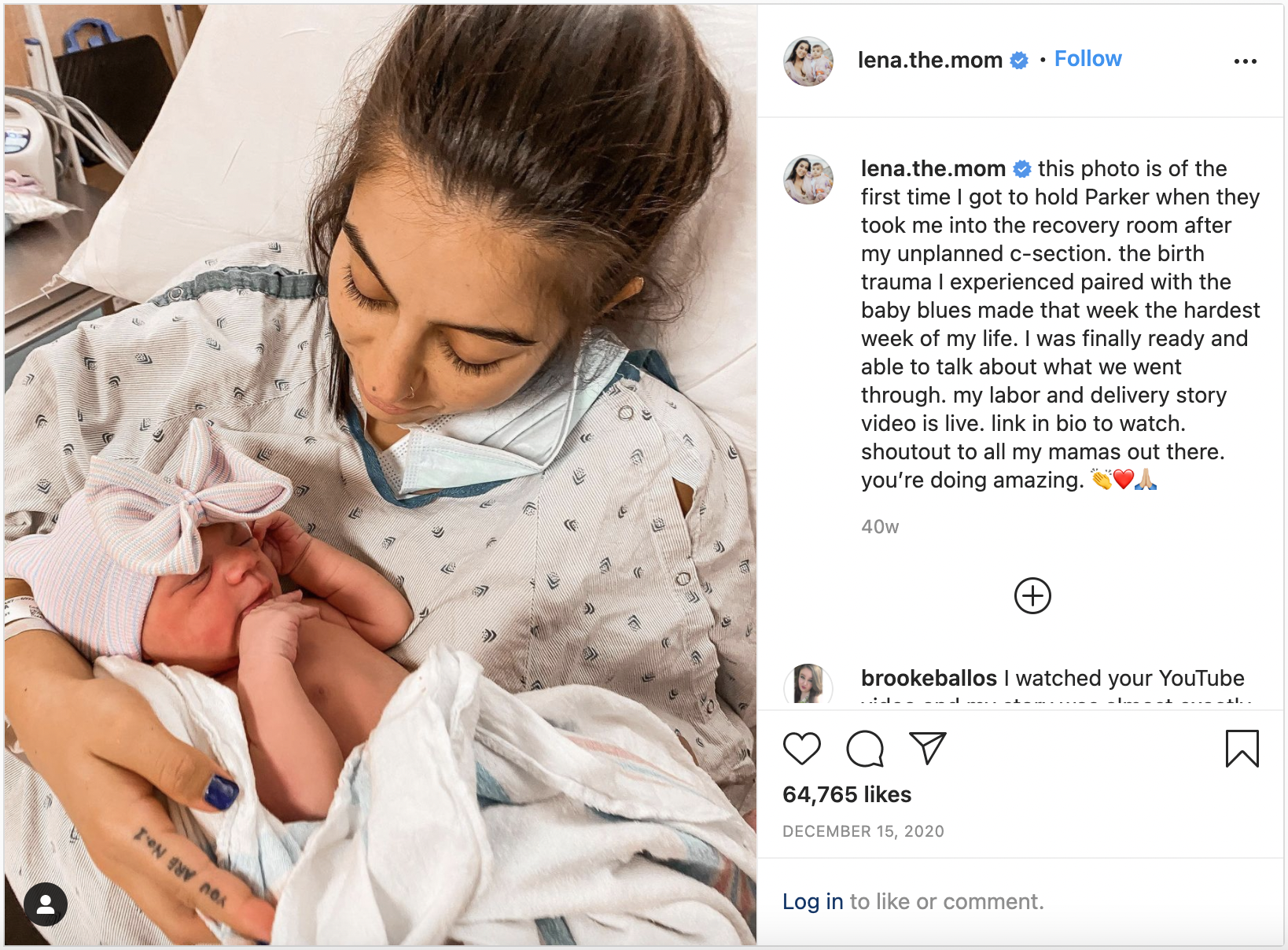 Meanwhile, Lena’s male fans are enjoying a bit of an education. “You were amazing for [your fans] before and now you have a lovely child that you are obviously loving to pieces,” one wrote on one of Lena’s many breastfeeding Instagrams. “Thank you for sharing the person that you are.”

It’s clear, however, that Lena operates in a way that doesn’t allow fans to pick and choose which Lena they get. They either get all of her — nipple play of both the sexual and breastfeeding varieties — or none of her: Lena the Plug and Lena the Mom are inextricably intertwined. It’s an intentional choice, and one that she feels strongly about, especially given the double standard she sees with her male partner. “I’d get comments like, ‘This is wrong, what about your kid? What’s she gonna think in the future?’” Lena tells me. “But my partner never saw those sorts of comments. You start to think, ‘Why am I the only wrong party in this situation when I’m performing with the father of the baby? Why aren’t dads held to the same moral standard as moms?’”

For the moment then, she’s mostly focused on piecing together her postpartum life — public or otherwise. “It’s been hard having to reignite a sort of love with myself,” she says, echoing another common postpartum issue. “I’m just now seeing some glimmer of me coming back to life.”

That sense of self is dramatically different from what it was two years ago — but if any of her fans have a problem with it, they can go find another lap to cry on. Lena’s is full.

Lillian Stone is a freelance humor writer and reporter. She has two thoughtless little dogs and writes jokes from her Chicago apartment where the theme is Grey Gardens, But Sexy.