Once you see it, you'll never be the same

Authors of cosmic horror, H.P. Lovecraft prime among them, have spun tales of abominations so inconceivable that to merely glimpse their alien geometry drives a person insane. Reality unknits itself in the presence of their uncanny power. But these monstrosities are not always fictional. Had you scrolled through Twitter back on July 9th, 2009 — a Thursday toward the dawn of that social network — you may have encountered one. Perhaps you were listening to the Black Eyed Peas’ “I Gotta Feeling,” which had topped the same band’s “Boom Boom Pow” on the charts, and wondering what was next for Sarah Palin, who had just resigned as governor of Alaska. Suddenly, there it was: a tweet from director Kevin Smith, fated to live in infamy for years to come. 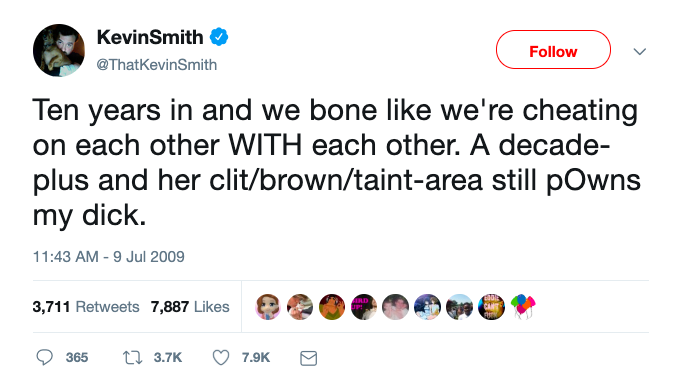 Yes. Drink it in. Let the words flow through your body, tickling the extremities — and, of course, your taint-area. Know what it’s like to experience psychosomatic blindness. Yes.

I’ve screenshotted Smith’s tweet in my journalistic habit of preserving web content the author may choose to delete later on, yet I doubt this was strictly necessary: It’s been a full 10 years, and the tweet proudly stands, much as Smith’s dick had stood loyally erect for his wife in the course of the decade prior. I can only surmise that it still does, and that today marks at least 20 years of pOwnage. Congratulations to the couple.

But, putting Kevin and Jennifer’s horny wedded bliss aside for a moment, we must deal with the ramifications of confirming it this way: Smith’s “cheating on each other WITH each other” tweet, hereinafter referred to as “The Tweet,” is universally reviled. Many have noted their personal disgust at The Tweet, while nobody, to my knowledge, has ever defended The Tweet as good, except in ironizing fashion: It is so mind-bogglingly awful that it is, in fact, excellent. None of this, I’ll reiterate, is a judgment upon the intimacy of the Smiths, who seem like nice people, as entitled to hot sex as anyone else. Nevertheless, the fact remains: The Tweet is viscerally offensive. It should not exist.

Last year, the A.V. Club referred to The Tweet as the “worst” of all time, causing a commenter to reply, “Boy I really want to live in the sweet land of milk and honey that is the universe where this is actually the worst tweet ever.” This, I believe, is an accurate appraisal of The Tweet’s net harm: It is an atrocity felt only by those who place themselves in its unyielding clitoral path. It is not hate speech, harassment or abuse. It contains no threat of or incitement to violence. It neither exploits nor exposes someone, with the possible exception of Jennifer, who hasn’t appeared to register an objection. Narratively, it has acquired the function of that Lovecraftian eldritch being, since none but the arrogant, foolhardy adventurer — in this case, the extremely online sort — will stumble across it. For that reason, it is also a sign of no return: Abandon all hope, ye who enter here. To read The Tweet is to perform an incantation that cannot be recalled.

Here’s where it gets complicated. In 2014, on the five-year anniversary of The Tweet, Smith posted a reply announcing that Jennifer was the true author, that The Tweet was the outcome of a bet between them, and that it was intended to mortify him as well as his followers. Months later, he wrote a Facebook post to the same effect. “I’d been on Twitter for a little over a year or so at that point and one of my favorite things to do was write sex Tweets about (and to) my wife, @JenSchwalbach,” he explained. “Go back and read Tweets from that era: lots of talk of ass-eating and whatnot. And what fueled my sex tweets were how much my wife HATED them.” When Jennifer had finally had enough, he said, she challenged him to let her tweet the most heinous filth she and several consulting friends could muster — with a promise that he’d never delete it. Smith agreed, little suspecting the tweet would endure. Instead, he came to realize he could never outrun it: “The amount of online mockery I’ve been at the receiving end of due to that Tweet is immeasurable. People tell me to delete it all the time, but I can’t: I gave my word,” he wrote. “It’s not a great story, but it’s something of a morality tale.” 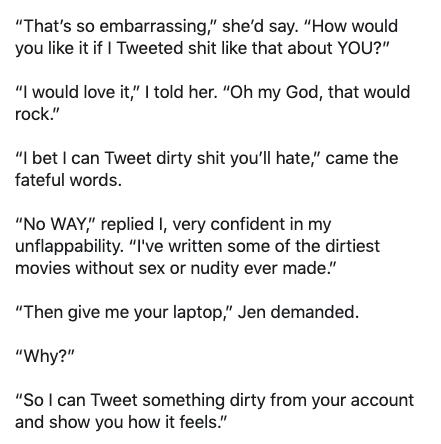 Few were convinced. On Twitter, Smith’s reveal earned accusations of revisionist history, obvious backpedaling and straight-up lies. Were he telling the truth, this would naturally be a fitting continuation of his punishment — doomed to forever protest that he wouldn’t have tweeted the cursed “clit/brown/taint-area” chain of characters in earnest. But should we trust his account?

That The Tweet came at a period of Smith reveling in verbally graphic sex talk — as throughout his filmography — is both a point for and against him. It creates the environment in which he’d blithely send The Tweet for simple shock value, but it’s also plausible incitement for Jennifer wanting revenge. Where his story falls apart is at the claim that he, chastened, decided to quit “sex-tweeting” her afterward. In December 2009, he posted this:

Then, in early 2010, this sequence (which reads from bottom to top, per the numbers): 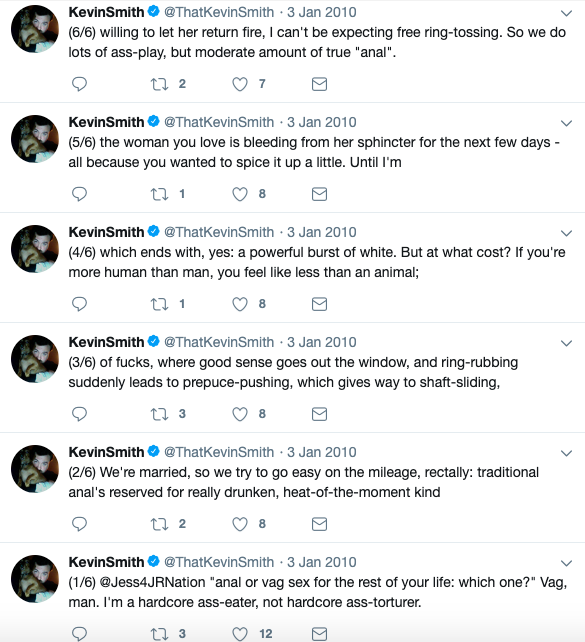 And later that year… I think you may be able to guess where this is going:

How could Smith, in 2014, declare “lesson learned” when the behavior that supposedly led to a reckoning didn’t cease? Unfortunately, when MEL reporter Quinn Myers reached out to Smith’s reps for comment on this piece, he was turned away. “Thank you so much for thinking of Kevin but he is unavailable for press at this time,” they wrote.

We are then left with another shred of evidence Smith offered in the Facebook update, and it hinges on what is arguably the single most upsetting part of The Tweet: the phrase “pOwns my dick.” According to Smith, he initially foresaw that “nobody would believe the Tweet came from me because pwn was misspelled — and as a longtime denizen of the internet, I’d know how to spell it.” Smith’s prescriptivist attitude toward the verb “pwn,” a variant of “own” with deep roots in programmer and hacker slang that likely originated as a typo, is a nerdy affectation entirely in keeping with his public and artistic persona; it has the undeniable ring of truth. One can also imagine Jennifer and her pals exploiting this linguistic anxiety, for while Smith was obviously comfortable with smut, the cultural taboo of botching leet speak would still have been a bridge too far. Indeed, it might’ve been the sole promise of humiliation for a guy who loves giant jorts.

As I warned you, once you have let your mind wander into the misty, pungent realms of The Tweet, you cannot find your way back out. The maze is without escape or center. It is just that baffled string of anatomy, the adulterous-faithful passion, that pOwning unto eternity. It is we, I think, who are pOwned, trapped in a sext to nobody and everyone, a non-sequitur of immortal disquiet, all of it hinged on jargon so archaic as to scan like Middle English. In the end, I am forced to conclude it is this word betraying Smith’s convoluted deception. Already skeptical of the notion that Jennifer, tired of Kevin tweeting about her ass, would repay him by tweeting about her ass, I find “pOwns” to be a resolutely Smithian choice of phrase, and the overall rather sweetly submissive conceit — that his wife’s perfect body dominates him in every way — is straight out of one of his screenplays. I wish I could leave it at that, but I know The Tweet will revisit me, and that I’ll see something I missed before, the seed of new doubts and theories. And so I beg you, Kevin, from one Jersey boy to another, for the sake of closure:

Just pOwn up to it.