When it comes to streetwear, the ‘Jesus Is King’ rapper is more ahead of the curve than we think

As the internet shits all over Kanye’s latest album, Jesus Is King, I’ve found myself obsessing over the first batch of his new merchandise. Sure, Kanye has made risky, sometimes unconventional choices when it comes to fashion — from the ugly Yeezy slides to the bizarre Yeezy runners. But as I look at the stretched-type, washed-out, Microsoft Word-style graphics and Jesus clipart on his new shirts and hoodies, I can only wonder if Kanye saw the “graphic design is my passion” meme one day and thought, I could charge $150 for that.

Kanye’s new collection is a play on “bootleg” merchandise — i.e., unofficial, low-cost and cheaply produced items, often sold in parking lots outside concert venues and on sites like Etsy and Depop. They’re usually blatant knockoffs of the originals, produced with lower-quality materials and cheaper printing that results in color-fading after a few washes.

In recent years, however, bootlegs have developed an aesthetic appeal all their own and become a core part of streetwear culture, a scene in which Kanye reigns supreme. And after West discovered 17-year-old Austin Butts, who goes by the name “Asspizza,” selling knockoffs of Pablo shirts outside his pop-up store, he incorporated the bootlegs into his official collection. Speaking to Dazed, Butts made an unexpected but profound statement about Kanye’s approach to merch design: “Something cool about these tees is that they’re based on old memorial tees. Technically, the Pablo shirts are bootlegs themselves.”

It’s for that reason that bootlegging Kanye merch is a precarious game. As Jay, a 30-year-old from Pakistan who sells bootleg merch in London’s Camden Market, tells me, “Kanye stuff sells pretty well, especially when there’s new stuff he’s coming out with. The problem is that there’s a lot of people who can make imitations of his stuff. A few years ago, you could sell by having a clear image or better-fabric T-shirts, and people would buy things because of the quality.” But now, he says, it’s easier than ever to get good-quality shirts printed and even easier to find accurate patterns. He should know: One of his best-sellers had been a version of the official I Feel Like Pablo shirts, a template that he and other bootleggers had found uploaded on a popular hip-hop forum. 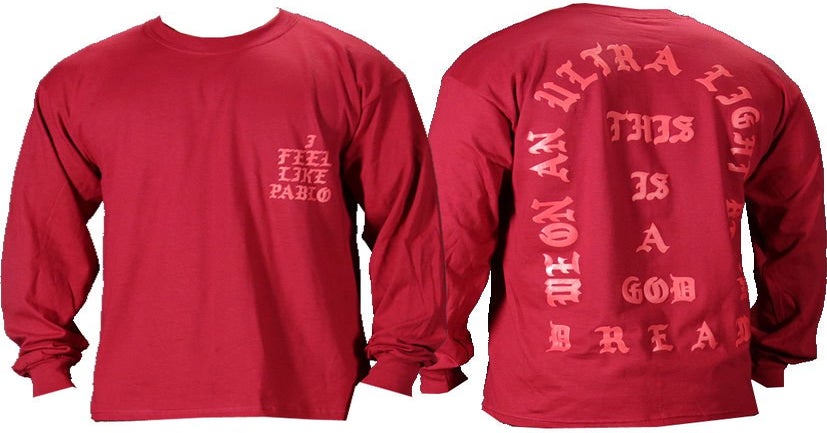 Jay explains that it would be fairly easy to recreate Kanye’s new line of merch, too. For financial reasons, though, he’s mostly hesitant to do so. “There are more people who are making their own shirts and selling them on the internet,” he says. Thus, it’s harder for him to sell them at a price where he can make back the costs of using wool-blend material and longer-lasting color printing. “I make more money selling older shirts that are cheaper,” he says.

If Jay is hesitant to produce more Kanye bootlegs, it’s probably also because of the way online shops like Etsy, Grailed and even eBay, where Jesus Is King bootlegs are already on sale and are advertised as “limited stock,” have dominated sales of bootlegs. As bootleg re-seller Marcus Campbell, a 21-year-old  in Baldock, U.K., says, “Bootlegs are part of the culture in merch. There are some people who would rather, actually, buy a bootleg than the real thing.” Campbell speculates that this is because people will actually wear bootlegs. “With the authentic ones, which are expensive, most people keep them in their original plastic packaging; they don’t want it to be damaged,” he explains.

Another reason, he suggests, is that bootleg merch — especially the flawed imitations with small mistakes in printing or coloring — can hold its own value. “I saw a green-and-purple Yeezy tour shirt once on eBay that went for a few hundred pounds. It wasn’t official merch, but it was one-of-a-kind.”

Is Kanye, then, ahead of the curve when it comes to fashion? And what exactly is he trying to tell us with his god-awful designs?

Karl Smith, a former editor at Hypebeast, says Kanye is mimicking the earliest bootleg merch, a style that was more familiar in the 1990s. “Other fashion brands like Raf Simons, Balenciaga and Ader Error have released pieces that borrow heavily from bad bootlegs, too,” he explains. “So [Kanye’s] riding a nostalgia wave rather than causing it himself, which is profitable but not groundbreaking.”

To Smith, the pivot to bootlegging isn’t just an aesthetic trend, it represents the solidification of “hype” in the economics of fashion. There’s a profitable industry emerging here, one in which Marc Jacobs and Gucci bootleggers have gone on to collaborate with the fashion houses themselves. “Bootlegging is very much the business of hype incarnate,” Smith says. “In recent years, with the memeification of culture, bootleggers now have become part of the conversation.”

Simply put, it doesn’t really matter how Kanye’s merch looks, or whether he made it on Microsoft Paint in an afternoon — he can still cash out. More importantly, knockoff wear doesn’t tank the value of the originals. Instead, it signals how difficult it is to cop real Kanye merch, making it only more coveted.

So while the reviews of Jesus Is King may not be great, the new merch line — along with the devoted fans who are eager to snatch it up — suggests hypebeast economics is alive and well and that Kanye will make a killing from sales.

Is that part of his religious journey? Only God can judge.