Joe Rogan’s Fans Are Dying to Get Inside His Head

Podcast kingpin Joe Rogan undeniably exists at some critical wavelength of contemporary masculinity. I realized this in a bar one night when eavesdropping on a couple of dudes who spoke with giddy excitement about their favorite episodes of his show, The Joe Rogan Experience; they praised an interview with Jordan Peterson as especially “rational.” That didn’t surprise me, but what they told the bartender a few minutes later did: Although they sounded like good friends, they’d only met the night before — one guy had picked up the other while driving for Lyft. It seemed they’d hit it off during the ride while discussing their love of all things Rogan.

This lies at the heart of Rogan’s appeal: He brings bros together so they can dive deep. The intersection of his favorite topics — martial arts, UFOs, edgy comedy, libertarianism, psychedelic drugs, nootropics, cryptocurrency, conspiracy theories, sex/gender, fitness, the military and general philosophy — presents as a figurative man cave in which nothing is taboo and “free-thinking” guests like Alex Jones can push fringe-y, reactionary nonsense.

In theory, it’s a big cave, with room for everyone… as long as you’re a man. According to Media Matters, over 91 percent of the people booked on JRE are male. So while Rogan’s audience is more ideologically diverse than you’d imagine, it does heavily skew toward what journalist Devin Gordon termed the “middle-bro” in a recent piece for The Atlantic. “Joe loves these guys,” Gordon writes, “and his affection has none of the condescension and ironic distance many people fall back on in order to get comfortable with them. He shares their passions and enthusiasms at a moment when the public dialogue has branded them childish or problematic or a slippery slope to Trumpism.”

While they’re not a universally toxic mass of alt-right goons, they do want a place to feel comfortable, without worrying that someone might get offended.

For that reason, I find it more interesting to study Rogan’s devoted fanbase, and how they engage with the thousands of hours of content he’s given them, than the actual interviews. If you’re as bored by Joe’s hobbyhorses as I am (do you really need to hear him rant against circumcision for eight minutes?), you may still find the r/JoeRogan subreddit, which has 425,000 members, fascinating to read. This is where dudes complain that Rogan’s CIA guests are there to spread disinformation and propaganda, or that Neil deGrasse Tyson kept rudely interrupting him during an appearance last month. It’s a portal for debate as to whether Joe could have played Joey on Friends.

But when they aren’t cooking up fun hypotheticals or critiquing JRE segments, the Roganites are examining Rogan qua Rogan. One posted this week, “I wish I could watch Joe Rogan play Quake,” as it “would probably be so cool to analyze his strategies and the way he plays.” A few hours later, someone expressed concern that Rogan, with his busy schedule, may have too little time for this family, kicking off a tangent regarding why he rarely mentions his wife and three children on the show. It’s as if, after consuming so much Rogan, they need even greater access — to get entirely inside his head. It makes a lot of sense, as the podcast itself was an outgrowth of demand for more Rogan material from fans who devoured the material he was putting out with video editor Brian Redban in the mid-2000s.

And indeed, the combination of JRE’s hangout vibes and bro-fundity could account for an emotional openness not usually associated with the Basic American Male. One r/JoeRogan thread in particular caught my eye the other day: “Does Anyone Have A Hypothesis As to Why Joe Seems to Be So Much More Angry An[d] Irritated Lately?” the original poster asks, noting that Rogan has sounded a bit snappish with guests and his producer, Jamie Vernon, of late.

A few believe he’s jacked up on testosterone, or perhaps tense from periodic slowdowns in physical activity. “As someone who’s gone from working out 6 days a week to not at all. Things that you normally don’t give the time of day, irritate you real quick,” a user writes. Below this is a psychological explanation: “He probably is antsy for a new challenge. Outside of stand-up and podcasting. But he’s been typecast into this role, and he will work it as hard as he can.”

It could be that he’s off weed, or strained by “Sober October.” There’s a rumor that he was recently semi-outed for cheating on his wife, and speculation that he’s grappling with his age (he just turned 52), or worried that YouTube will demonetize his channel. “It feels like Joe is deeply unhappy with *something* going on in his life right now,” one redditor affirms, even as a lone contrarian accuses the entire forum of always ginning up “People magazine drama bullshit.” 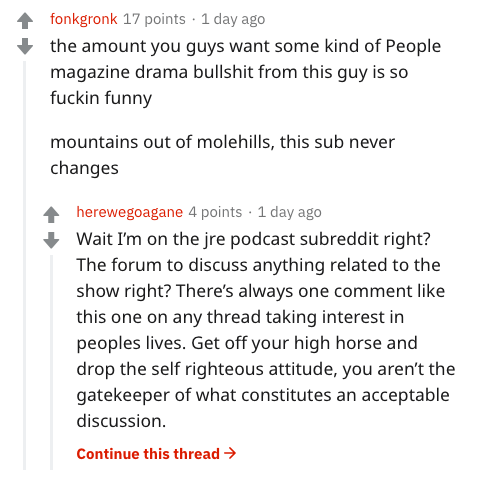 That Rogan’s listeners want to mindhunt their hero — to pinpoint his core — is perfectly in keeping with his “I’m gonna be real with you, bro” ethos. But it also means they’re well-attuned to his less appealing qualities, anger above all. They’ve spent serious time with the man; they know when someone or something has rubbed him the wrong way, and they want to get to the bottom of it. Here you can read them analyzing his rage issues via his career transition from steroidal meathead to pop intellectual (the aggressiveness stems from anxiety, claims a fan, and has been soothed in part by cannabis, though others appear convinced that Rogan has long been insecure in his height). Here they fret over his treatment of Jamie, saying he’s too short-tempered when his employee tries to jump into the conversation (“I think it’s because Joe holds himself to impossible standards, and he applies his employees to that same standard,” someone charitably suggests.)

Whatever these men are taking away from The Joe Rogan Experience, they’ve also begun to intuit moods, motives, inner lives and interpersonal dynamics. Their flawed hero has given them a map to the contradictions of masculine identity. 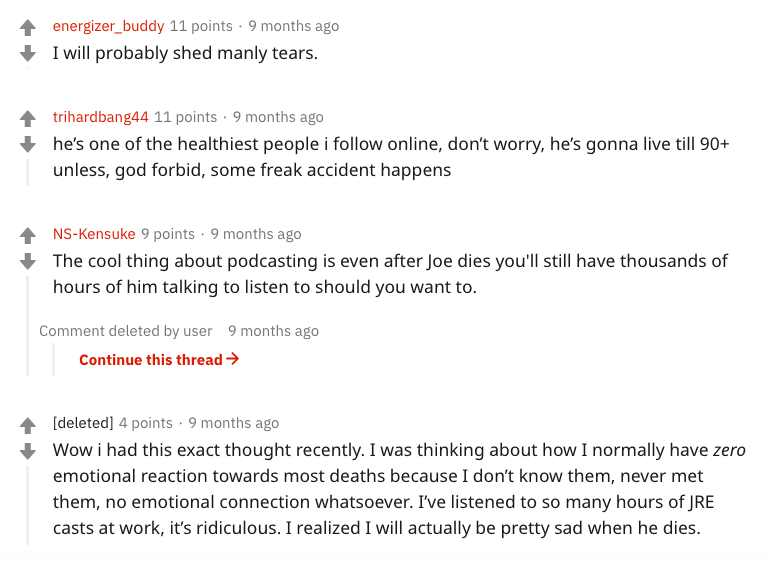 It might be too far a stretch to say that Rogan is improving men’s emotional literacy overall — their focus remains largely on him, of course — and any positive impact he’s had in this regard is problematized by extreme views aired on the podcast. Yet I can’t deny a tickle of optimism at the idea that their close attention to a bro whose job is to ask Bernie Sanders about aliens has led to enhanced awareness of how people feel and communicate, or the value of introspection. Joe’s obsession with DMT and the like has everything to do with “expanding your mind,” and it’s possible the heart expands as well.

That’s why it’s such a pity his range of guests is so narrow and male. Thousands of guys tune in with the goal of self-improvement, and were that process to include a widening of one’s empathy, the subjects ought to come out of a bigger pool. These listeners are observant, active and curious. Why not give them something to really chew on?