On his podcast, Joe Rogan tackles the big issues. Politics, philosophy, the unexplained and the unknown — the meaning of it all. In one episode, he and his frequent guest Michael Shermer (a historian of science) discuss life after death. Shermer makes the point that since we cannot hope to find out what happens after we die, short of dying ourselves, we need to focus on how to live. Rogan agrees. “There are fascinating things to contemplate,” he says, “but ultimately, you really, for practicality’s sake, you really should be paying attention to life.”

But for a guy who seems obsessed with how to be, whether in terms of fitness routines or intellectual curiosity, Rogan has a fanbase, and a digital footprint, that constantly alleges his unexpected demise. At the age of 53, with millions of dollars in the bank and no apparent health issues, he is unlikely to perish from any natural cause in the near future. But you can turn up countless examples of people insisting he’s died in a freak accident.

The YouTube comedy channel International Enquirer, for example, last year posted a video titled “A Tribute to Joe Rogan – Gone Too Soon,” styled as a captioned news clip without voiceover. “While on a hike with his dog, he slipped off a cliff,” the text reads. “His brains were later found in the passing of his dog’s bowels.” The video goes on to speculate that he was murdered by the U.S. government for promoting the keto diet and criticizing the Food and Drug Administration.

Or, here’s a redditor sharing the image of a tombstone for Rogan, setting 2058 as the year of his death and alluding to the T1 fiber-optic internet he claims to have paid $10,000 a month for in the 1990s in order to play the video game Quake online without annoying lag. And how about a chyron that states Rogan has been found dead in his apartment, “likely due to a marijuana overdose” — something the podcast host would reject as medically impossible? According to Know Your Meme, jokes and fake announcements about Rogan’s death have been a trend for at least a decade already. The internet being what it is, each iteration begets more content — and search interest in “Joe Rogan death” has ticked steadily higher in this period. The Google algorithm will even serve up related queries like “did joe rogan died today 2020” and “joe rogan dead tmz 2020,” which suggests people are trying to confirm each new rumor that he’s passed away.

After a parody death notice made the rounds in 2014 (this time it was a DMT overdose), Rogan himself refuted the story, adding that he’d had nothing to do with it, as he’d “never [been] much of a prankster.” A year before, he’d dispelled a different hoax regarding the purported death of Appalachian folk dancer Jesco White. Rogan puts a great premium on “the truth” in his work; it makes sense he’d be set against whatever he considers fake news. 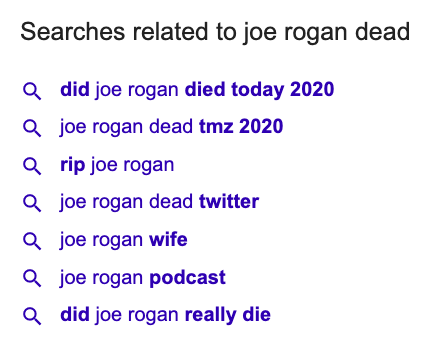 Why, then, do we have so many memes that reference Rogan’s departure from this mortal coil? Why stage a reaction video where you pretend he’s suddenly croaked, and why do people spam Twitter, NFL Twitch streams and UFC live chats with the hashtag #RIPJoeRogan?

On the surface, it’s just silly trolling: State something false for your own amusement, and once in a while you may briefly fool someone. (You can watch former NFL running back Arian Foster get derailed in a Twitch stream by a commenter who wrote “RIP Joe Rogan 1967-2020 rest easy,” breaking off his stream of thought to check Google.) Over time, the repetition becomes the gag. It’s filler, stuff to clog up timelines and chat boxes. The equivalent of saying, Hey, I’m here.

That #RIPJoeRogan is technically misinformation, whatever the humorous intent, draws an arrow back to Rogan’s podcast, on which he’s occasionally pushed false narratives and, most recently, aired dangerous skepticism toward the coronavirus pandemic. He has mocked face masks even while bragging that he has access to frequent testing and as his pals get sick. There’s a stoner enthusiasm to Rogan that lends itself to unreliability and overstatement, and that’s reflected in media coverage (e.g., the headline “Joe Rogan Almost Died While Gaming”).

His listeners are keenly aware of this; they probably enjoy disagreeing with and roasting him as much as his critics, if not more. Spreading accounts of his death is in some way a playful response to his habit of distorting fact, not to mention his “edgy” brand of anything-goes comedy. It’s also a way to anticipate or prepare for a loss that’s bound to be devastating for the bros of this community. Moreover, the continued riffing creates a celebrity conspiracy that runs counter to the ordinary kind. Instead of Elvis or Tupac remaining secretly alive and well, Rogan is inexplicably dead in middle age. All the same, he’s unpredictable enough, and occupies such an odd, individual tier of fame, to lend the memes a hint of plausibility. For now, it’s usually easy to brush off “Joe Rogan died” as idle spam, but one day he really will die, and the years of crying wolf may cause some hours of confusion. Which will, perhaps, complete the gag — Rogan existing in a superimposition of life and death, no longer conscious but survived by his unaccountable influence.

I wouldn’t be surprised if his loyalists, or whatever’s left of them, start saying “Joe Rogan lives” after that. The most consistent lesson of Rogan’s prolific output, and the psychedelic journey to the center of mind, is that reality bends to perception. 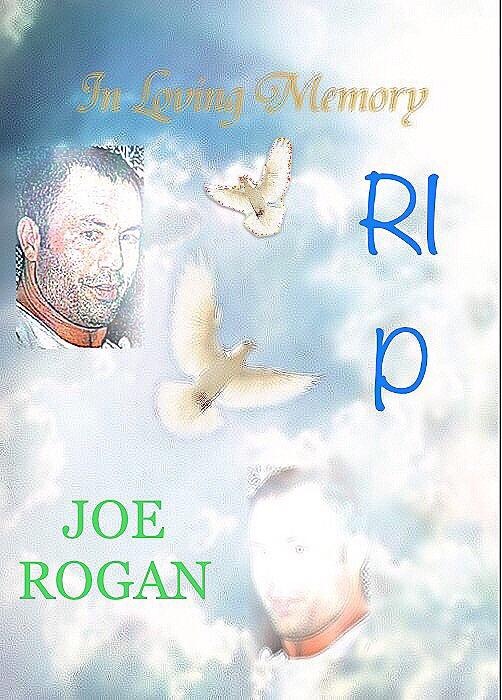