The Far Right Is Grasping at Fringe Jill Biden Conspiracies

From Tucker Carlson to QAnon posters, the right is already cooking up crackpot theories about Dr. Jill Biden’s control over the president. Where have we heard this old, sexist talking point before?

The American right isn’t particularly scared of President Biden. They’ve spent so long disparaging him as feeble and mentally unfit that it would strain even their rarely coherent narrative to say he’s some kind of ultra-effective, neo-Marxist supervillain. Even now, the memes and chatter perpetuate the notion that he’s a confused old man in over his head and, if you subscribe to the lie that the 2020 election was stolen, an illegitimate head of state besides.

Where it comes to assigning blame for the Democratic agenda, the conspiracist element of the GOP is more likely to focus on governors of blue states (Andrew Cuomo, Gavin Newsom), top congressional figures (Senate Majority Leader Chuck Schumer, House Speaker Nancy Pelosi) and various progressive women (Reps. Alexandria Ocasio-Cortez, Ilhan Omar and the rest of the “Squad”). With Biden himself perceived as something of a puppet for the party, it’s essential to figure out just who’s pulling the strings, and some have begun to speculate his real boss is standing right next to him: Dr. Jill Biden, First Lady of the United States, his wife of 44 years.

While a lot of the smears and crackpot theories about Jill Biden are just beginning to percolate in conservative and fringe forums, Tucker Carlson has already floated a version of this content to his millions of viewers on Fox News. In a segment oozing with petulant sarcasm, the cable host gushed about the authenticity of the First Couple’s love: “No, ladies and gentlemen, Jill Biden is not Joe’s caretaker. She isn’t his nurse. She’s his fully equal romantic partner. … The Bidens’ affection is totally real. It’s in no way part of a slick PR campaign devised by cynical consultants determined to hide the president’s senility by misdirection.”

Carlson’s message, of course, is just the opposite: that the incapable president’s actions are directed by a shadowy cabal, with Jill holding the most intimate and direct control over the supposed leader of the free world. It’s the same messaging you’ll find in online corners of the fringe right. 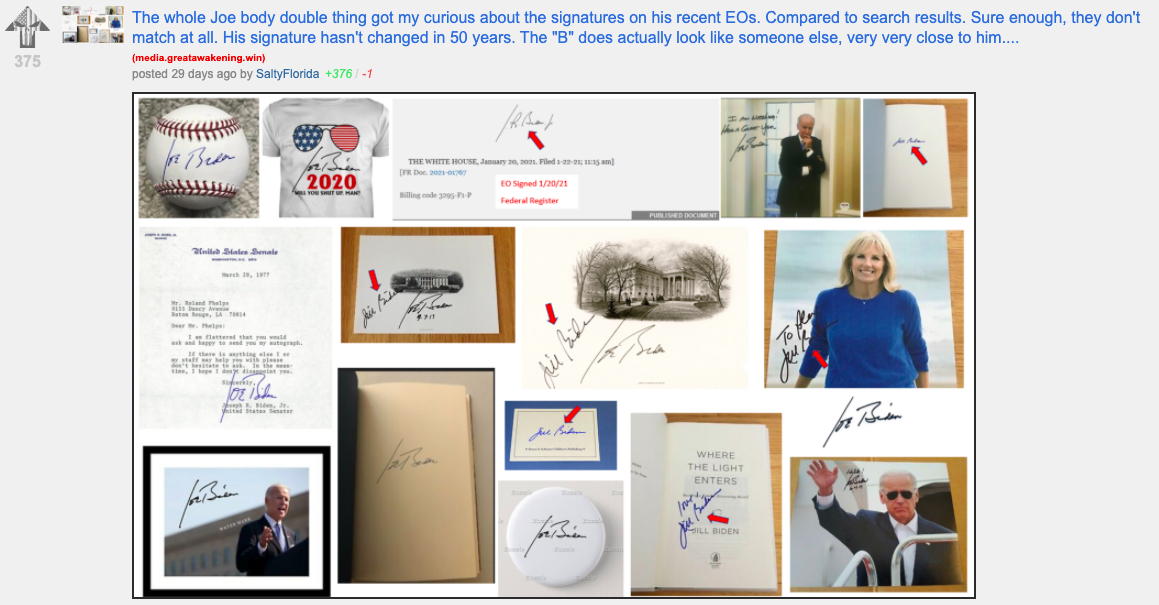 On the QAnon and 4chan boards, the graphic above, purporting to show that President Biden’s various executive orders were in fact signed by his wife, makes the rounds with some regularity. (Its “evidence” is that Jill and Joe Biden sign the letter “B” similarly.) The unfounded claim appears to have been forwarded by far-right fake-news site the Gateway Pundit, which in early February published the suspicion of an unnamed “Missouri pharmacist” that Biden’s signatures had been forged in order to conceal his shaky handwriting. The alleged resemblance of the E.O. signatures to the First Lady’s penmanship led Gateway Pundit founder Jim Hoft to wonder: “Is Jill Biden more than her husband’s handler?”

He and others already take as a given that Jill assists Joe with basic tasks that he finds difficult in his old age. Here, like Carlson, he not-so-subtly cast her as the real power behind the throne.

The groundwork for this conspiracy theory was laid during the campaign, when conservatives looked for any scrap of proof that Dr. Biden was running the show for her ailing husband. You might even trace it back to the Clinton 1990s, when Hillary saw her approval ratings plummet on the perception that she had overstepped her experience and role as First Lady by taking a lead role on healthcare reform (ultimately a failure that cost the Democrats dearly in the 1994 midterms). Ever since, she has been vilified as a power-hungry Lady Macbeth, a woman whose ambitions, per the most outlandish rumors, carry a body count.

Years later, First Lady Michelle Obama would become the target of transphobic myths that suggested she was the “real” man in the White House — InfoWars’ Alex Jones presented what he called photographic “proof” that she has a penis, and weirdo Republicans continue to argue that her physical features can only be those of a transgender woman (meaning, in their bigotry, that she isn’t a woman at all). 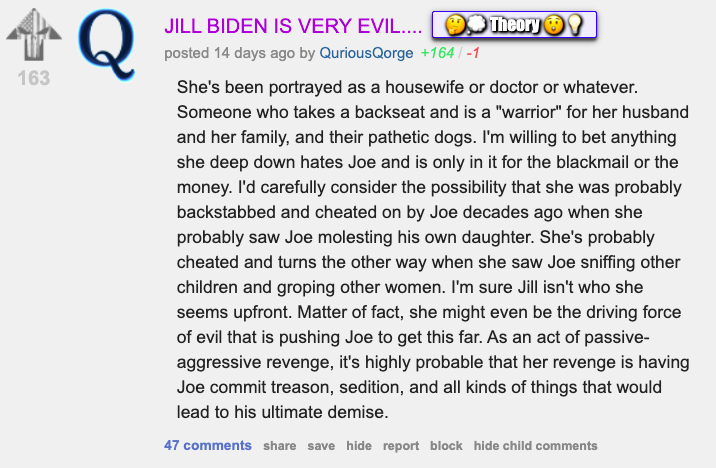 The angle of attack on Jill Biden is adjusted for the conditions of the marriage — the wildest things you’ll read are posts from people who believe she orchestrated the car accident that killed Joe Biden’s first wife, Neilia, and their daughter, Naomi — but the underlying dogma is the same. American conservatism, from the mainstream to the hardcore post-reality movements like QAnon, is deeply Christian, fixated on traditional family and gender roles. The right’s continued fawning praise for First Lady Melania Trump as beautiful, elegant and feminine rests in the assurance that she knows her place alongside Alpha God-Emperor Trump and otherwise keeps out of his way, no more than a symbol of his virility.

The wives of Democratic presidents, conversely, must be Machiavellian shrews, eternally dissatisfied with their position of subservience and clawing their way to greater influence. Behind every male Democrat in office, some believe, is a woman who nagged him there. This characterization has the added bonus of framing the Democratic presidents, from Bill to Barack to Joe, as weak, henpecked and emasculated. Thus do these partnerships betoken the decay of marriage under liberalism.

As ever, these folks could likely stand to deal with their own familial issues before going down another rabbit hole. And while illegible graphics that show how Jill Biden was secretly sworn in on Joe’s behalf will hold little appeal to anyone not already in this coalition of fascist cults, it’s surely the kind of thing we can expect in the months ahead. More evidence, as if you needed it, that Trump was neither the beginning nor end of the feverish paranoia that defined his presidency.