The fringe right is hungry for another junk food conspiracy

Poor Comet Ping Pong. The pizza restaurant and concert venue in Washington, D.C., is forever saddled with the debunked “Pizzagate” conspiracy theory advanced by fringe right personalities during the 2016 election. Leaked emails from the account of Hillary Clinton campaign chair John Podesta supposedly proved the eatery served as a base of operations for a powerful cabal of Satanic, pedophilic Democrats; this viral hoax led to threats, harassment and even a shooting in which no one, thankfully, was injured. Some Pizzagaters backed off the idea afterward, but others doubled down, seeing the gunman as an “actor” in a “false flag” plot to discredit them.

Since then, and through the presidency of Donald Trump, what remained of the Pizzagate scene has been largely subsumed by the internet cult known as QAnon. Followers of “Q,” a cryptic poster whom they regard as a highly placed individual or group with access to top-secret government intelligence, are likewise sure of a massive human-trafficking scheme overseen by the Democrats, the “Deep State” and others. To the extent that they care about financier Jeffrey Epstein’s well-documented operations in that underground market, it’s only to accuse Hillary of having him killed in prison. Far more appealing to Q folks and their fellow travelers is the art of collaging a map with red yarn to show how seemingly mundane details all web together as proof of secret, terrible machinations that sabotage America and destroy the lives of innocents.

Now, in 2020, it’s starting to feel as if QAnon is too diffuse, too eternally delayed. Where is “The Storm,” they talk about, or the “Great Awakening”? This hive needs something familiar and solid to latch onto. Something like Pizzagate, but different. Enter Jeni’s Splendid Ice Creams, an upper-end brand based in Columbus, Ohio, with 47 stores and nationwide retail distribution. Haters have likened the product to “Ben & Jerry’s with an added tablespoon of salt per pint,” yet it’s quite popular with at least two customers: House Speaker Nancy Pelosi and the presidential campaign of former Vice President Joe Biden, who continues to putter his way to the nomination. In fact, you might easily get the impression that it’s the official dessert of the Democratic party.

What’s more, Biden is plainly obsessed with well-stacked cones; in 2016 he visited Jeni’s headquarters and proclaimed, “My name is Joe Biden, and I love ice cream.” A dairy processing plant at Cornell University created a new flavor for him, honoring the vast archive of memeable photos in which Biden devours scoops of vanilla chocolate chip. Ice cream is inseparable from his image, and it’s abundantly clear that Jeni’s is his preferred ice cream.

Where will the QAnon sleuths take it from here? Pizzagate proved that the simplest recipe for an arcane right-wing conspiracy is [junk food] + [Democratic machine] + [election year], and we’ve got those ingredients at a steady simmer again. So where a rational observer might note that Jeni’s founder Jeni Britton Bauer is a long-time supporter of Biden and former President Obama, or that Biden and Pelosi are supporting a swing-state business, the truthers can begin their work. 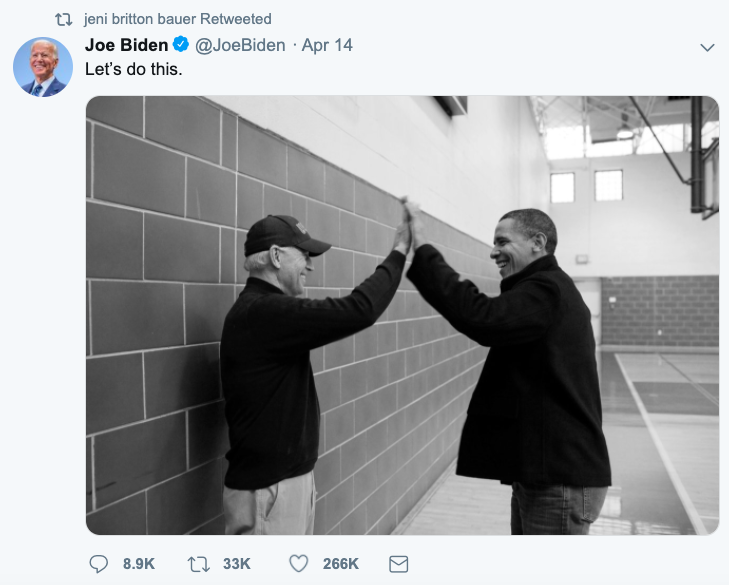 The trick, as ever, is to turn this ice cream into a symbol of polarizing politics, or better yet, moral depravity. Hit the obvious point first: “Limousine Liberals” are out of touch, buying expensive ice cream while millions are forced to apply for unemployment. Next, bring in some deeper background: Bauer has previously advocated for companies to sever ties with the National Rifle Association over the crisis of mass shootings — therefore her ice cream is explicitly anti-Second Amendment.

Sooner or later, though, you’ll have to unearth the clue that links your targets to occult ritual, child rape and shadow regimes. In this case, that link takes the form of Les Wexner, billionaire chief executive and founder of L Brands, which owns Victoria’s Secret and Abercrombie and Fitch, among others. The Ohio clothing entrepreneur was a mentor to Bauer, she’s said in the past; he also happens to have been good pals with the late Epstein, to whom he gave his power of attorney and significant assets to manage. He’s been accused of complicity in Epstein’s preying on women, though without facing real consequences on that front. Wexner and Bauer serve together as trustees on Ohio State University’s Wexner Center for the Arts, where Bauer once worked as a student employee.

With me so far?

Once you’ve got the two-degrees-of-separation from Epstein gotcha (for some reason this is always far more damning than Trump being actual friends with the guy), it’s open season. Sure, the eye on an ice cream server’s bird tattoo is part of the code. The various Jeni’s flavors — like the pizza toppings at Comet Ping Pong — all correspond to different victims and tortures. And the fact that Bauer’s first establishment was called Scream Ice Creams is surely not insignificant.

Before you can wrap your head around this confection, the conspiracists are sprinkling other weird shit on it. Upon digging up a Bauer interview on the food site ChefsFeed, the analysts eagerly dissected the header art, amazed to see a joke bathroom sign with a pentagram that says “Employees Must Carve Slayer Into Forearms Before Returning to Work,” plus a hand gesture that Madonna made in a recent Instagram video. It’s the same art that ChefsFeed uses on every “20 Questions” interview, but who cares! It’s a piece of the puzzle.

Congratulations, Democratic establishment. Because you couldn’t diversify your taste in ice cream (or keep the damn freezer closed), you not only look like the wealthy elites you are, but you’ve given QAnon and friends the means to build a towering edifice of bullshit that may be, in the very near future, impossible to ignore. The libs need to stick to their lattes and arugula — consumables that speak of status but fail to stimulate the more deranged elements of popular imagination.

It’s crowd-pleasers like pizza and ice cream that lead to the darkest rabbit holes.