Here’s a concept for you: shame.

It gets a bad rap, shame does. In fact, we shame each other for shaming — reminding one another not to publicly judge other bodies and sexualities, cultures and individual struggles. There is, in progressivism, a push to destigmatize that which falls in the natural scope of human experience, and broadly speaking, that’s a good thing. We need a trend that cuts against the foundational Puritanism always resurfacing from the American DNA. Too much shame is stifling and destructive for society — the basis of witch hunts. But it still has value in certain forms. This type of shame evolved for a reason. “A positive aspect of shame,” writes author and psychotherapist John Amodeo, “is that it tells us when we’ve hurt someone, when we’ve crossed a boundary that violates a person’s dignity.”

An ounce of that shame would have prevented New Yorker writer and CNN analyst Jeffrey Toobin from masturbating in a video conference with colleagues and peers. If not the potential shame of scandal, then perhaps the inward shame of knowing that you have sexually gratified yourself while you were meant to be communicating in a professional, albeit virtual, environment. Millions of us have worked from home for months, using this kind of connective technology, without exposing themselves, or, more to the point, even risking that exposure. There are small, understandable accidents — a spouse walking by in the background in their pajamas, or noisy eating from someone who forgot to mute — and then there are offenses that, in almost any job, would get you fired on the spot. (Or at least force your employer to settle a hefty lawsuit.)

So far, Toobin is “suspended” and “on leave” from his coveted legacy media gigs, which in practice means he is “on vacation.” His mostly male defenders — both tacit and open, including writers at Vox and the Atlantic, plus a CNN anchor — are chiding those who voiced disgust with his behavior. Since Toobin did not intend to touch his bare genitals in full view of his co-workers as they ran an election simulation, these men argue, the act should be forgiven as an honest mistake. 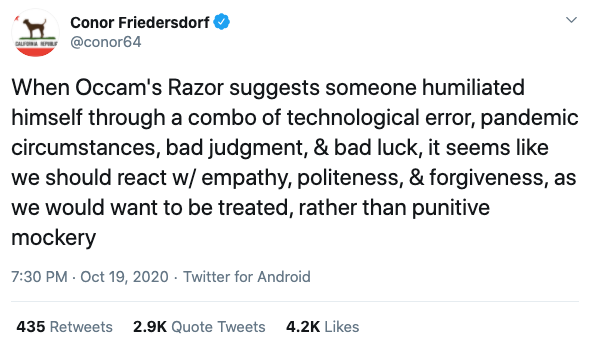 But when you do something wrong, you aren’t often trying to get caught. Where it comes to intent, what matters is that Toobin deliberately pleasured himself in a meeting. It’s not something that happened to him, around him or outside of circumstance. He made a choice.

Is it really so harsh to allow for consequences here? Or not rush to normalize what Toobin did, whether by conflating it with healthy, private self-pleasure, or suggesting that he fell victim to an uncontrollable, inherently masculine urge? CNN’s report — remember, Toobin works for them as well — even frets that he’s “been sidelined at a pivotal moment in the run-up to the presidential election,” as though his disappearance from cable news is too dear a price for us all to pay over this transgression.

But truly, who gives a single rotting fuck what Toobin would have said on TV today, tomorrow or November 3rd? He must not have thought it was all that important, given how he, uh, multitasked in the prep session. Indeed, he managed to literalize the masturbatory airs of the pundit class as a whole. He and the other talking heads are not gifted with special, vital insight as to the state of this country, and they end up revealing only their blind spots. The denialism that looks to separate a man’s infamy from his achievements and perceived importance leads to misunderstanding abuse of power and remains a tiresome hallmark of the #MeToo discourse.

To brush past what will forever be termed the “Zoom Dick” as a technical mishap or unfortunate timing is to reinforce the absence of accountability that grants prestige and influence to men who can’t be bothered with the simplest expectations of conduct. First-graders can be relied on to keep their pants up; at the age of 60, what’s Toobin’s excuse? Maybe he’ll plead sex addiction, or claim a pertinent mental health diagnosis. Fine. I don’t care. Good luck in the fight or whatever.

But anyone attempting to justify a cock shot on an editorial call is lowering the bar down into hell. The boundaries between the office and home are blurrier than ever, yet they have not dissolved. It’s insane to demand empathy for a Harvard Law creep who does not evince the minimum of respect for the staff at the magazine which affords him a lucrative reputation, and may now shield him from the fallout that would haunt or destroy a less privileged career.

Cry cancel culture if you must. No one possessed of any common sense is having it. We’re past all that, and you’d damn well better catch up. It’s time to develop the kind of shame that stops you from beating your meat while on the phone with a couple dozen non-consenting people, or from rationalizing this as an ordinary response to pandemic stress and the insurgent male libido. The shame that would force a company, and its wider industry, to atone for creating the spaces where these violations occur again and again.

It is overwhelmingly the white men in charge of institutions — as opposed to the vulnerable and marginalized, routinely shamed for asserting an agency that makes the old gatekeepers uncomfortable — who have no grasp of this positive shame. They are so without it, they have the gall to say that being outed as a toxic harasser or serial predator is oppression equal to that of an immigrant told to “go back,” a trans person taunted and threatened online or a woman driven out of her chosen field by the embedded misogyny that brands her an idiot, bitch or slut.

Shamelessness breeds more of the same, and in the last few years, we’ve seen the extreme results of that cycle. Draw the line, and do not budge, for at this very moment, Toobin’s friends and suck-ups are planting the idea that this was everyone’s fault but his own. They’re wrong. Let them be humiliated in kind.