Jake Tapper, What Are You Even Doing, Man?

What happened to the obsessively even-handed and dignified news anchor? CNN killed him and replaced him with clowns like this

Jake Tapper, what on earth are you doing? Bro! Bro. Come on. This is enough. Please.

Jake, I’m not getting it. You’re a successful CNN anchor and political talk show host with an impressive résumé. You’ve covered major, chaotic stories on the ground and were quicker than most in media to see the “weapons of mass destruction” ploy in Iraq for the sham it was. And you look like the platonic ideal of a clean-cut TV newsman. You’ve got everything going for you, but I still have to wake up in the morning and find you cluttering up Alexandria Ocasio-Cortez’s mentions with inane questions like these: 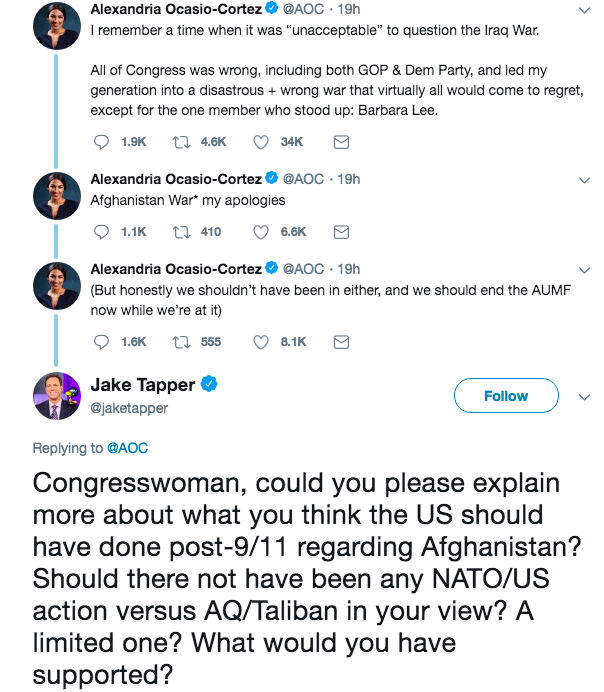 Here’s my question: Why? Why ask this? What would you learn? And do you have a time machine? It no longer matters what we might have done instead of invading Afghanistan, because the invasion happened and it’s now a generation-long human rights atrocity. We’re battling a half-dozen existential threats as a species, but you’re miffed that a congresswoman pointing out the dumb futility of war has somehow offended the troops. To paraphrase Capote: That is not journalism — it’s just posting.

But, okay. Maybe you love the military, or the defense complex or plain old American interventionism, which hasn’t had a positive result in [checks clock] about 75 years. Maybe I could ignore this one smarmy tweet pressing AOC on a position that is, at least, noncontroversial, and in most ways an apolitical truth. Although your little outbursts of propriety are becoming more common, aren’t they, Jake? Gosh, it was only a couple of days ago that you patted yourself on the back for basic subway etiquette.

This is… insane, to me? I saw someone give up their seat to an elderly or pregnant or disabled person almost every day I rode the subway. The answer makes no sense, and that’s before you, uh, identify yourself as the chivalric hero of this “anecdote.” My guy, I’m worried — you don’t even understand how quote-tweet/reply bait works.

I guess you were too eager to touch, once again, the subject of decency, a favorite hobbyhorse. It’s this topic that has you laundering the anti-democratic line that voters confronting their elected representatives in public are “mobs” and need to learn some manners. It’s what persuades you to book guests like Stephen Miller, who is never there to voice the good-faith argument you’d like to hear, or Rick Santorum, a walking, talking irrelevance to all but a microscopic and hateful fringe. And then there’s your crush on Fox News.

This is the part that really confuses me, Jake. While you try to live up to some nonexistent model of a completely objective, universally trusted midcentury newscaster — you’re such a both-sides guy, you don’t even vote! — you claim that “decency and truth” are the arenas in which you feel compelled to take a side. Fox News would seem to be the most glaring example of disdain for those values within your industry, but 10 years ago, well into their efforts to smear Obama, you went to bat for them as a “sister” organization to ABC and a legitimate news source.

And I don’t quite understand how you can attack Trump’s lies while excusing the propaganda company that writes them. The president obviously can’t be separated from Rupert Murdoch’s empire, as Jane Mayer recently wrote in a New Yorker investigation, “The Making of the Fox News White House.” Even the nativist birther nonsense that propelled Trump into a campaign was the result of a Murdoch invite to spew it weekly on Fox & Friends. Pretty cool.

Part of me suspects we’re watching the slow demise of the obsessively even-handed and dignified anchor role you aspired to (in fairness, you have won an Edward R. Murrow award), as yelling “Sir! SIR!” to the corrupt and powerful isn’t cutting it anymore. Your territory is being ceded to the centrist wonks who offer braindead “analysis,” like CNN’s Chris Cillizza and Brian Stelter, both afflicted with what Libby Watson called “the Both Sides virus that afflicts the Objective Newsman [and] the pathetic, gutless devotion to a false notion of ‘civility’ above all else.”

But these two won’t fare much better than you, Jake, since they inherited your unwillingness to admit that Republicans lately offer nothing but grift, spite and resurgent white terror. Someone who cared about the facts might have the courage to say as much to their massive audience.

Unless it turns out that you don’t particularly care what your viewers think, either.