The L.A. baker will see your traditional American sweet-potato pie and raise you this subversive Filipino version

Isa Fabro is a baker in L.A. whose pies and desserts have won viral attention and critical love. She centers many of her dishes around ingredients from her Filipino heritage, including this subversion (of sorts) of the classic American pumpkin pie. Fabro is the third in a trio of people we’ve interviewed who bring a uniquely cultural perspective — and dish — to the Thanksgiving holiday.

Thanksgiving is particularly special to me because my birthday happens at the same time, more or less. So maybe that’s why I’ve always loved pie in a different way. It reminds me of that blend of Thanksgiving and my birthday, when we used to go to McDonald’s as a bunch of little kids, getting Happy Meals and feeling so special because my mom made a reservation there for us. There’s also the pictures I have where it’s Thanksgiving and there’s a turkey on the table but also a birthday cake and pie. [Laughs]

My family is pretty middle class, so a lot of times, creating that classic Thanksgiving meal was a very commercialized process. There would be a pie that we bought from the grocery store. I can still name all the brands: It was an Entenmann’s pie, with Dreyer’s vanilla ice cream on top. We did easy, fast recipes for gravy and casserole. We also had the cranberry jelly out of the can, which still looks really beautiful in a way, cut up into medallions that miraculously hold together.

In celebrating this kind of meal, my family was trying to adopt new traditions of being in the U.S. Becoming aware of that process helped me to assimilate because my parents were so new to it.

As I got older and started working in restaurants, it became just one big blur of having to work through my birthday, Thanksgiving and Christmas. But in the last several years, having left the restaurant world behind, I’ve been able to settle down and think about what I really want to do. That’s why I ended up doing so much pie — it reminds me of Thanksgiving and my own birthday as well as served as a major way for me to reconnect with being Filipino. It’s only recently that I’ve started learning about why I’m here in America, what’s happened in terms of colonialism and why food is created in certain ways (and not others). I’m learning about history, finally.

This is my culture, but it’s also a culture that I didn’t have any serious connection to. It’s hard to explain, but I had this feeling of nostalgia — of missing something. But with me, it’s more like I’m missing the idea that I should miss something. I had a Friendsgiving last year where I baked pies, and I purposefully avoided the classics like apple and pumpkin. I did that stuff in some of the restaurants I worked for, and there was no fulfillment in it for me, other than just doing a good job. I must’ve made the ube-pili nut pie that’s become so popular — it’s even become familiar to people who otherwise have no idea what ube is or where pili nuts grow. And once I started making pies with ingredients like ube, people were coming up to me saying, “Thank you for making this, because it reminds me of something I had in the Philippines,” or “Thank you for sharing our food with people and making them interested in our culture.”

You know, I did my first wedding recently, which was fun. But people have also brought my pies to funerals. There were two funerals last month, and I remember mentioning, “Oh, I’m really sorry that you lost a loved one.” And they just told me that they hoped my pie could make some people happier than when they first walked in.

Food has always been linked to this idea of feasting together and of sharing something, whether it’s Thanksgiving or a general celebration. But it becomes so much more powerful when it can evoke a sense of nostalgia. 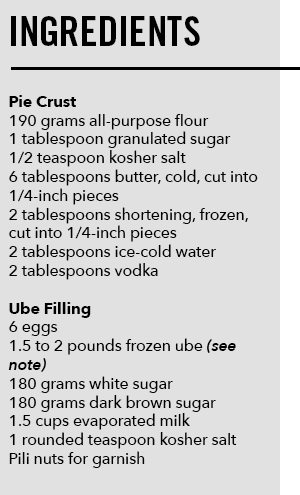 Note: Frozen whole ube is available at many specialty Asian markets. You can substitute fresh purple sweet potato with some simple prep: Prick the sweet potato all over with a fork, wrap in foil and roast in a 375-degree oven for 45 minutes or under tender. Peel while hot and set aside.

For the crust, using a mixer, combine the flour, salt and sugar. While the mixer is running at medium speed, add in the butter chunks and mix until it breaks down into little pea-sized bits of butter throughout. Then lower the mix speed and add the shortening, beating until you again see little bits and pieces of fat in the flour. Slowly stream in the combined vodka and ice water. Mix only until the dough turns shaggy and starts to stick together.

Plop the mass onto a flat surface or cutting board sprinkled with flour, and form it into a flat disk. Cover it with plastic wrap and refrigerate overnight.

For the filling, if using frozen ube, grate it by hand using the finest setting on a box grater. Mix the grated ube — or warm sweet potato — with the sugar in a large bowl (the bowl of a stand mixer, if you’re using one). In a smaller bowl, crack the eggs and whisk them thoroughly until the whites and yolks are completely mixed.

Using your choice of mixer, start blending the ube and sugar together on low and slowly stream in the egg mixture until it combines. Do the same with the evaporated milk. Once all the ingredients are blended together, set aside.

For final pie assembly, take out the rested dough about 30 minutes before rolling, so it can warm up. Heat the oven to 350 degrees. Then grease a standard 9.5-inch pie pan using butter.

Once the dough is pliable, roll it out on a floured surface to a diameter of about 14 inches wide. Lay it into the pie pan, and then prick the bottom several times using a fork. You need to par-bake the crust before filling it, so line it with a piece of parchment paper and then add “pie weights” to shape the crust correctly (pouring in dried beans works fine, too). Finally, protect the outer crust from burning by using skinny strips of greased foil. Bake for 20 minutes.

Remove the weights and the paper and fill the crust, keeping the foil edges on. Crank the oven to 400 degrees and bake for another 20 minutes. Turn the pie and bake for 20 more minutes, until the crust is golden and flaky and the center is soft. Garnish with a sprinkle of crunchy sea salt and crushed pili nuts (or, if you can’t find them, macadamia nuts).