It is, without question, the color orange

For the last few days, I’ve tried to reach out to the people at Sunny D with no success. Voicemails go unreturned, emails have bounced back, their Facebook account failed to respond and even my tweets at them have gone ignored. It’s okay though. I’m not taking it personally, because I already know the answer to my question: “Is Sunny D orange juice?”

The answer, quite simply, is “no.” To be fair, Sunny D doesn’t say it’s orange juice on the bottle either. Instead, it describes itself as an “orange-flavored citrus punch” — whatever the fuck that means — but when I was a kid in the 1990s, which was during the heyday of Sunny Delight, I always just figured it was OJ and never thought twice about it.

In reality, Sunny D contains just five percent juice, and the main ingredients are water and high-fructose corn syrup. “This drink is essentially a water and sugar cocktail with less than two percent by volume of any actual juice in it,” explains Dana Hunnes, a dietitian at UCLA Medical Center and author of Recipe for Survival: What You Can Do to Live a Healthier and More Environmentally Friendly Life. “It’s a mixture of chemicals, high fructose corn syrup and alternative sweeteners, along with salt and colorings.” 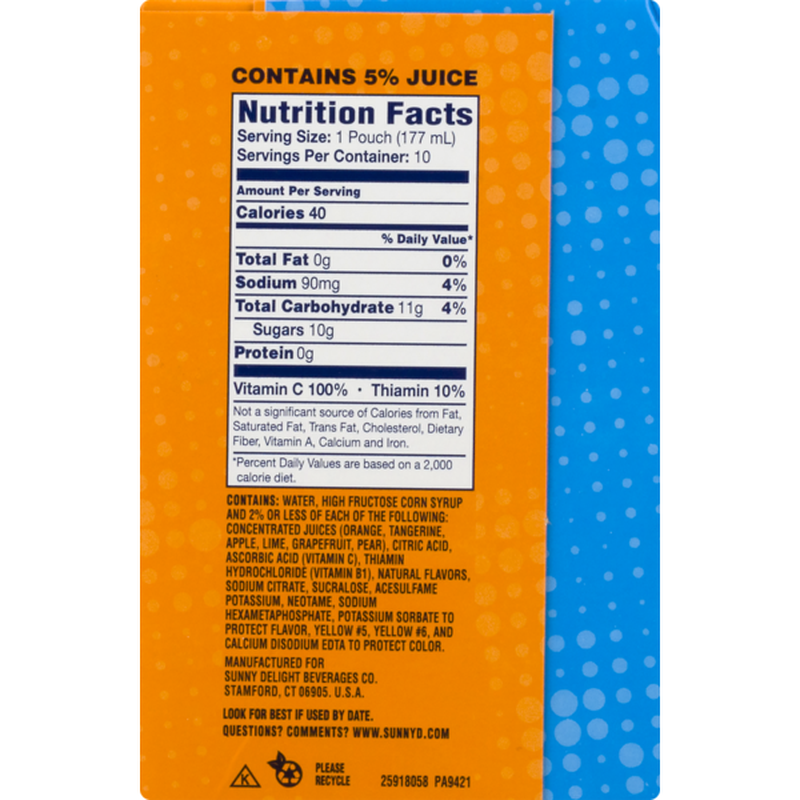 She goes on to say, “High-fructose corn syrup is a type of processed sugar product that’s known to be lipogenic [fattening], especially in the liver. Acesulfame potassium is an alternative sweetener that has been banned in several countries and may be carcinogenic. Neotame is also an alternative sweetener that has been found to be deleterious to health. Finally, food dyes are known to be carcinogenic. So, really, Sunny D seems like a carcinogen in a bottle and not healthy by any means.”

Hunnes is far from the first person to feel this way, as Sunny D has received complaints for decades about its deceptive advertising and how it could easily be mistaken for orange juice thanks to its labeling — which is orange and has fucking oranges all over it — as well as its taste. In 2001, there was a big uproar over the product made by the Florida Department of Citrus, which complained that Sunny D — particularly the “Florida Style” Sunny D — misled consumers into thinking it was orange juice.

If anything, the old-school marketing of Sunny Delight made it seem like it was a better alternative to orange juice, as the commercials used to feature kids deliberately pushing aside orange juice to get to Sunny Delight. It then touted all the vitamins that are in there and ended with the slogan, “The good stuff kids go for.” And, yeah, it does have vitamins, but Hunnes says the Sunny D bad far outweighs the Sunny D good.