Is a Corn Dog a Sandwich or a Popsicle?

It’s on a stick and it’s surrounded by bread, so it’s got to be one of the two, right?

Before we get started here, it must be understood that a hot dog — when on a bun — is a sandwich. I know we don’t look at it as a sandwich or think of it as a sandwich, but it most certainly is a sandwich — that’s settled. Merriam-Webster’s dictionary declared that the hot dog is a sandwich, as do the laws in several U.S. states. Ruth Bader Ginsburg even said it was a sandwich, so, unless you can accept that fundamental truth, it’s going to be really difficult to proceed onto the subject of whether or not corn dogs are a sandwich as well (much less a popsicle).

It’s hard to say exactly where queries such as these originate, but the corn dog debate seems to have been popularized by a Twitter user named Alex Crawford, who tweeted this out at 3 a.m. in 2018 and was shocked to find that it went viral:

If you think about the question, there are compelling reasons for both options — a corn dog is meat inside of bread, like a sandwich, but it’s also on a stick, like a popsicle. So it’s a valid question for sure and certainly worthy of investigation. For Crawford, he says, “It’s both; it’s neither. More popsicle than sandwich, though, I would say.”

Given that, I’m going to start with the popsicle argument.

Not to be pedantic, but “popsicle” is actually a brand name, not a word. I should actually have been capitalizing it all this time as “Popsicle” in fact, and because the Popsicle brand doesn’t sell any corn dogs under its label, then a corn dog can never be a true Popsicle — only a Popsicle brand Popsicle can be a Popsicle. An “ice pop” is the proper word here, and an ice pop is defined as being a milk-based or water-based frozen snack — not beef-based or pork-based or lips-and-assholes-based.

A corn dog is also not a frozen food, or, at least, it’s not consumed frozen, which is why food historian Julia Skinner says that she’s on the side of a corn dog being a sandwich. Even when a corn dog is frozen though, it still couldn’t be considered an ice pop, because it’s not milk-based or water-based. Frozen corn dogs also didn’t begin to be sold until the 1960s, several decades after the corn dog’s origin, so are the pro-ice-pop crowd saying they only became ice pops starting then? Such an argument hardly holds water.

A corn dog is most certainly a “pop” though, as in, the colloquial term for any food on a stick. While people have been putting food on a stick for centuries, the word “pop” in this way derives from “lollipop,” which originally just referred to candy that can be “popped” into one’s mouth (or “lolly”). Lollipop specifically began to mean candy on a stick in the early 20th century, and when the inventor of the ice pop, Frank Epperson, first began selling his product, he described it as a “frozen lollipop,” which eventually became shortened to an ice pop.

All this aside, I personally find the sandwich argument to be a bit more compelling, if only because the definition of a sandwich is more liberal than the definition of an ice pop. “Two or more slices of bread or a split roll having a filling in between” is how Merriam-Webster defines a sandwich, which is why they eventually chimed in on the hot dog debate, declaring it to be a sandwich. A corn dog, however, doesn’t consist of a roll or any slices of bread — the corn bread is batter, which is indeed different. As one redditor put it, “Batter is not a bun, otherwise chicken tenders are sandwiches.”

During the days of the hot dog debate, Mental Floss looked to the law to settle the issue. In the piece, they found that New York State has some of the most liberal definitions of what a sandwich is, writing: “Sandwiches include cold and hot sandwiches of every kind that are prepared and ready to be eaten, whether made on bread, on bagels, on rolls, in pitas, in wraps, or otherwise, and regardless of the filling or number of layers. A sandwich can be as simple as a buttered bagel or roll, or as elaborate as a six-foot, toasted submarine sandwich.”

The legal bulletin then went into an extensive list of what a sandwich is, including hot dogs, hamburgers, gyros and even burritos. Corn dogs, however, were not included on the list. Also, according to the USDA, a corn dog is not even given the distinction of being “sandwich-like,” which it does say of burritos and fajitas in its regulatory guidelines.

Given all that, it’s clear that a corn dog cannot be a sandwich or an ice pop, according to any of the definitions of either of those terms. As author, professor and food historian Ken Albala explains, “Of course it is neither. Popsicles are frozen, and sandwiches are only between bread. Corn dogs are an anomaly, like no other food.” To take that even further, I’d say that the effort to label the corn dog into any such group is to cheapen it and under-appreciate its brilliance.

To elaborate, the corn dog is an invention with a great number of originators, each claiming a bit of the history for themselves. Several hot dog businesses claim to be the first to come up with it, including the Cozy Dog Drive-In in Springfield, Illinois, whose current proprietor, Josh Waldmire, felt the corn dog was a sandwich when I reached out to him. These inventors all date the corn dog back to the 1940s, but a patent for a deep fryer for battered hot dogs dates it back even further, to 1927.

But to go back just one year more, to 1926, a restaurant catalog sold something called a “Krusty ‘Korn Dog’ Baker.’ This device is a waffle iron with a press shaped like an ear of corn, which is intended to have a hot dog placed in the middle of the batter. It even says, “The Krusty ‘Korn Dog’ is a corn bread waffle, shaped like an ear of corn with a ‘hot dog’ baked inside.” 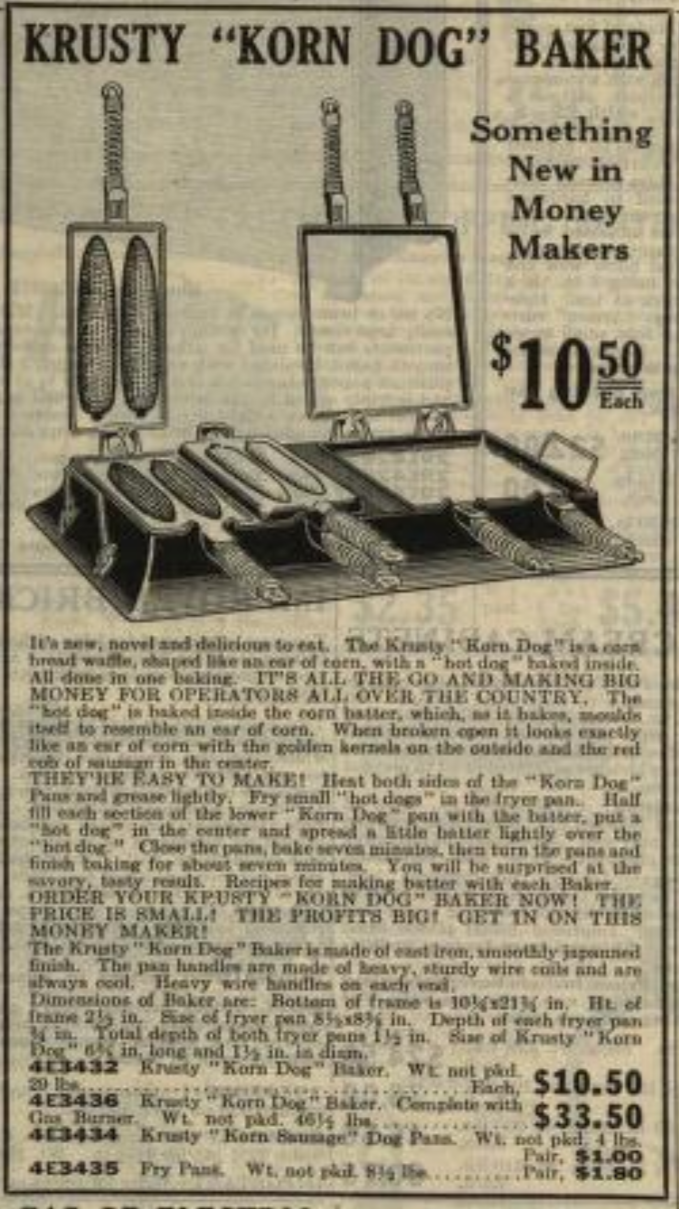 Now, by the next year, people had figured out that frying a corn dog was the way to go, and when it became popular in the 1940s, all corn dogs were fried, but for a brief, fleeting moment in 1926, the corn dog was indeed exclusively a waffle — and on that indisputable fact, there can be no waffling.