Inside the New Movement of Support Groups for Retired Men

They call themselves “PIPs,” or “Previously Important Persons,” explains Chuck Fink, the 69-year-old founder of Men’s Wisdom Works, a bi-monthly support group for men in Asheville, North Carolina who yearn for well-balanced lives in retirement.​

PIPs, Fink tells me, are former VIPs who once commanded attention but now can go days without interruption. Minions used to make reservations for them, but these days, they wait on hold for the next available agent. Suddenly, in retirement, a PIP finds himself unshackled from management teams and floats adrift, unmoored without the professional support he’s come to rely on. His smartphone is like a gun loaded with blanks, the daily flood of emails having shrunk to a trickle.

This morose phenomenon is well-known. Studies have found the probability of men developing clinical depression increases by nearly 50 percent in the two years after retirement, with suicide rates in the U.S. and Canada peaking at age 55.

In 2008, at age 58, Fink retired from a career in organizational development and sunk into a deep depression, fixing to be among the statistics. “I just wasn’t prepared,” he says, noting his daily schedule was comprised of two things: sulking and moping. His wife, who was excitedly building a new dog-walking business, dragged Fink to a conference called “Marketing to Boomers and Beyond” at the University of North Carolina, Asheville chapter of the Osher Lifelong Learning Institute, where the keynote speaker was then-AARP Vice President Rick Moody. Men and women go through the same emotions when they retire, Moody explained, but women handle themselves better by socially networking, personally disclosing and finding peace in transition. Men, on the other hand — especially older men — bottle things up.

“It was like a jolt of electric shock therapy,” Fink says of Moody’s speech. He leaned over to his wife and whispered that he was going to start a support group for men in retirement. Now, a decade later, Men’s Wisdom Works has 17 chapters throughout western North Carolina totaling more than 200 members.

The groups meet twice a month for two hours at breakfasts, lunches and happy hours (they total about eight to twelve men in size). Meetings begin with a check-in, where each participant gets three minutes to share what’s been going on in his life since they last met. A topic arises from the initial shares, and the rest of the meeting is spent delving into that topic. Recent discussions have included:

“Isolation is a killer, especially for older men,” Fink says, noting that social withdrawal in retirees has been linked to numerous medical issues, including dementia and early death. “We have guys who were big shots in their careers who come in listless and sad. We introduce ourselves, one at a time, explaining how we handled the existential crisis they’re experiencing. After a few months, the depression usually lifts.”

Men’s despair in retirement is completely understandable, says sociologist Lyndsay Green, author of Ready to Retire?: What You and Your Spouse Need to Know About the Reality of Retirement. “We know how integral having a sense of purpose is to well-being,” she explains. “Even if [the dozens of men she interviewed for her book] hated their jobs, they were proud to be making a contribution to the greater good. Having that suddenly stripped away in retirement can be very traumatic.”

In such a traumatic situation, the first thing Green suggests is acknowledging that it’s normal to miss your professional identity when it goes away. Similarly important: Admit that your workplace is going to quickly move on without you. “I was probably remembered for about 10 minutes,” a man in her book says, likening it to removing a bucket of water from the ocean. To assist in the transition, she recommends working with a retirement life coach, finding an encore career or joining a support group like Fink’s. “Another organization I love is called Men’s Sheds,” she says, which she describes as “a boys’ clubhouse for men.” 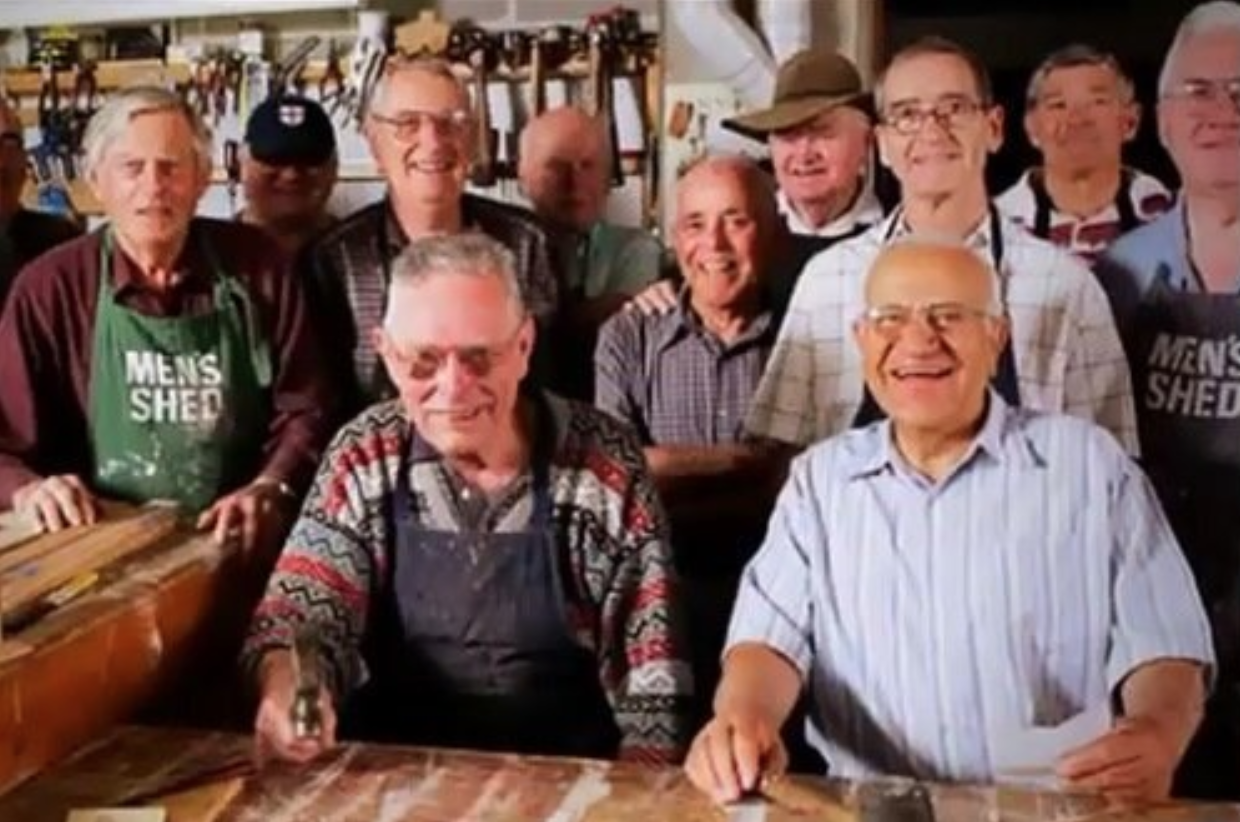 Men’s Sheds are fixed places where men can learn new skills and work together on community projects — e.g., building park benches, making toys for children’s hospitals, volunteering at food drives, etc. “We fix people’s appliances, build boat docks for those in need and do all kinds of community work,” says Mark Winston, a 61-year-old retired businessman and a founding board member of the U.S. Men’s Sheds Association. “We want to break the cycle of social isolation. When men retire, they lose their work identity, which is important for us guys. When they participate in a shed, they reconstitute their personalities, which helps a great deal on the path to staying active, feeling good about yourself, and not falling into pits of depression.”

“I was just sort of fluttering around,” says Gary Smith, a 71-year-old retired AT&T project manager with the Elgin Men’s Shed in suburban Chicago. “[Men’s Shed] gave me something I could really dig into. I’ve made two or three good friends. That’s the whole point of this — to get out of your shell, meet some new people and get back to doing things you know that you’d like to do, like woodworking.”

Men’s Sheds originated in the mid-1990s in Australia, where they now number more than a thousand, with an additional 200 in New Zealand. The movement has spread to Ireland and England as well, which have 400 and 450 sheds, respectively. The U.S. and Canada are slightly behind the curve, with 14 sheds concentrated in the Midwest and Hawaii and nine more in development. “I suppose the mere fact that Ireland had zero sheds in 2009 and is getting on 500 now means that there’s an unmet need out there that sheds are addressing,” says Turlough Kelly, communications officer with the Irish Men’s Sheds Association, who adds that many of their members played sports when they were younger. “They miss that atmosphere of the dressing room and fooling around. That was a major part of their life that’s now absent, but they find it again in the shed.”

“People assume men don’t talk, but they just do it in a different way,” says Barry Golding, a professor in the Aboriginal Education Centre at Federation University Australia and author of The Men’s Shed Movement: The Company of Men. “Men don’t talk face-to-face, they talk shoulder-to-shoulder whilst working on a project. Lulls in the natural cadence of those conversations is where one might mention a medical issue he’s dealing with, leading to a potentially important conversation.”

To wit: “Last night we were talking about nose problems at our meeting,” says 63-year-old retired school teacher Victor Maltby, President of the Hackberry Men’s Shed near Ottawa. One guy’s nose started bleeding while the group was building horse sheds for a therapeutic riding center, prompting a debate on the perils of nose spray.

Impromptu medical interventions are sometimes much more serious, though. Christopher Wilson, a 71-year-old in Grand Rapids, Michigan, tells me he overheard someone at a shed in his native Christchurch, New Zealand, talking about a lump he’d recently noticed. “One of the guys said it looked an awful lot like a cancer prognosis his brother-in-law received and gave him the name of his doctor,” he tells me.

“While we’re carving donation boxes for a local thrift store, Bob might mention that he needs to get his prostate checked out,” adds Winston. “Another guy will chime in and say, ‘I’ll go with you. I haven’t had mine checked in a gazillion years.’ As a result, their physical health improves, their mental health improves and they have the shared satisfaction of being on a mission together, both in and out of the shed.”

Shedders also consider bereavement duty to be sacred. “A member’s wife died two years ago, and then his daughter died suddenly a few weeks ago,” Maltby says. “We all showed up at the wake, and he burst into tears. His sister said, ‘You guys are from the shed?!?! He talks about you all the time!’”

Golding credits this philosophy to the late Dick McGowan, a former vice principal in South Australia and de facto founder of the Men’s Shed movement who believed that all men needed three things beyond paid work: somewhere to go, something to do and someone to talk to. Or as McGowan once wrote, “The most important factor is not what goes on there [in a Men’s Shed]. The ‘what goes on’ is the cheese, the bait if you like, to encourage our male population to come together in a familiar setting, to have somewhere to go which is theirs, to do something of male interest, or choose not to, and to have contact with their fellow residents and the wider community. In short, the most important factor is engendering the DESIRE to go there, to have a reason for getting out of bed in the morning, to have a sense of achievement of production, of security in knowing they are still people of worth.”

To that end, David Helmers, executive officer of the Australian Men’s Shed Association, thinks the very terminology we use to describe retirement is all wrong. “You work your whole life, save up and plan to retire from work one day. But we should be retiring to something, not being removed from something.”