The Disturbing Reason Incels Are Obsessed With Teenage Love

'I get so fucking enraged when I see a teenage couple. Makes me want to go Elliot Rodger'

Incels, or “involuntarily celibate” men, have plenty of time on their hands: time to seethe about sexually active men and unattainable women, time to share their miseries and self-reinforcing gender narratives online. Theories exchanged on incel forums — which propagate and survive despite the occasional crackdown or deletion — tend to become baroquely incoherent as the community spends weeks and months delving into them, fleshing them out. You could fill an encyclopedia with what they’ve written on the “few millimeters of bone” that determine whether you have the right skull shape, for example.

One popular analysis, however, holds to a simple idea. David Futrelle, who tracks and writes on toxic masculinity at his blog We Hunted the Mammoth, saw it rehashed a few days ago on the message board Incels.is. The post that caught his eye said, among other revolting things, that “no love is as pure as Teenage Stacy worshiping your dick.” His fellow incels seemed to agree. “I get so fucking enraged when I see a teenage couple,” wrote one. “Makes me want to go ER.” (“ER” as in Elliot Rodger, who in 2014 embarked on a deadly mass shooting, ostensibly to “punish” women for rejecting him.)

Looking back, you find this idea has been in circulation for a minute. There are memes that posit a kind of “deadline” for losing your virginity — one accepted as non-negotiable: 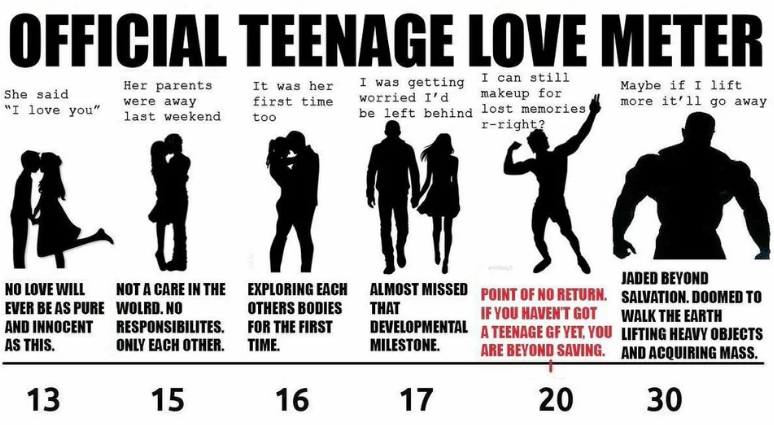 Incels upload photos of happy high schoolers with captions like “Daily reminder that you missed out on teenage love.” Others refer to the imagery as “potent suicide fuel.” 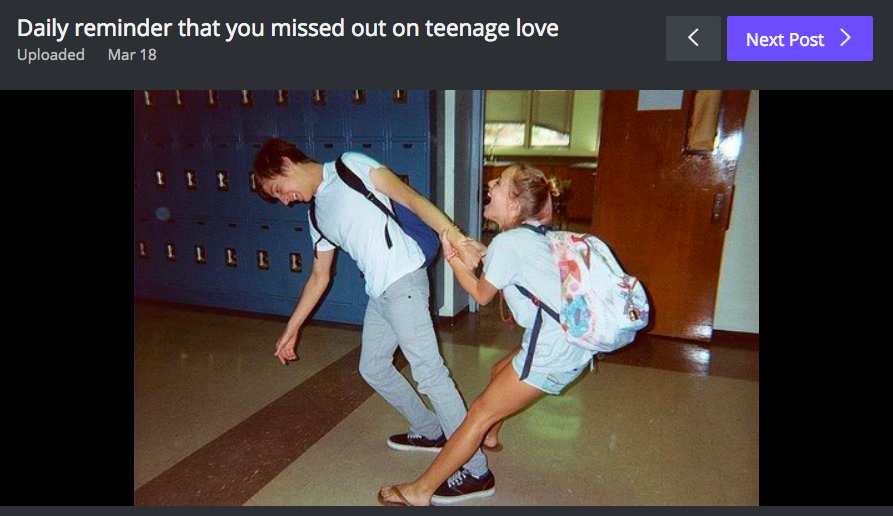 Even men who claim not to be incel complain that they never had boyhood romance:

Nostalgia for an Invented Past

Young love can no doubt be a treasured milestone on the way to a fulfilling adult life, but that’s not exactly what the incels are claiming here. For starters, while some allude to emotional affection, this “teenage love” is more often defined by the physical — everything from a touch to kissing to sex. They also see early carnal knowledge as necessary to proper maturation, which means the lack of it functions as an excuse for their current bitterness, as well as a reason to give up any daydream of companionship in the future.

If any of this sounds vaguely familiar, it’s because it’s not far off from what actual teenage boys believe — or what raunchy comedies have led us to imagine they believe, anyway: that you’ve got to get laid before it’s too late. Even guys who started fucking in their 20s, incels argue, are essentially dead inside.

This trope, then, is best seen as proof that the incel’s powers of reasoning are frozen somewhere around the ninth-grade level, and largely informed by pop-cultural representations of youth instead of the empirical truths that puncture Hollywood’s reductive and idealized take.

Not truly aware of what they’ve missed by not dating in adolescence, they choose to enshrine the relationships-that-weren’t as a fleeting form of purity that would have saved them. It’s nostalgia for an invented past.

“Teen love is the best love there is. We will never know how it feels,” an incel wrote on Reddit’s r/Braincels earlier this year, rendering the fallacy in the starkest possible terms. How can you know something’s “the best” if you only live with a fantasy?

Yet the incels buy in, eager to explain why they cannot free themselves from a dungeon of their own design. Predictably, they also turn to junk science in order to legitimize the notion that men are irreparably broken by not engaging in intercourse immediately following puberty. Here’s a Reddit post titled “If you missed out on teen love it’s over and here is why” (sics throughout):

When you are a teenager (12–17) you sexual organs have matured and now you are physically capable of having sex. Girls’s sex organs are mature from an even younger age but when they are jaibaits they start growing pubes on their p***** and their hormones kick in.

Naturally, that claim led to a discussion of whether “hormones” are the same as love. 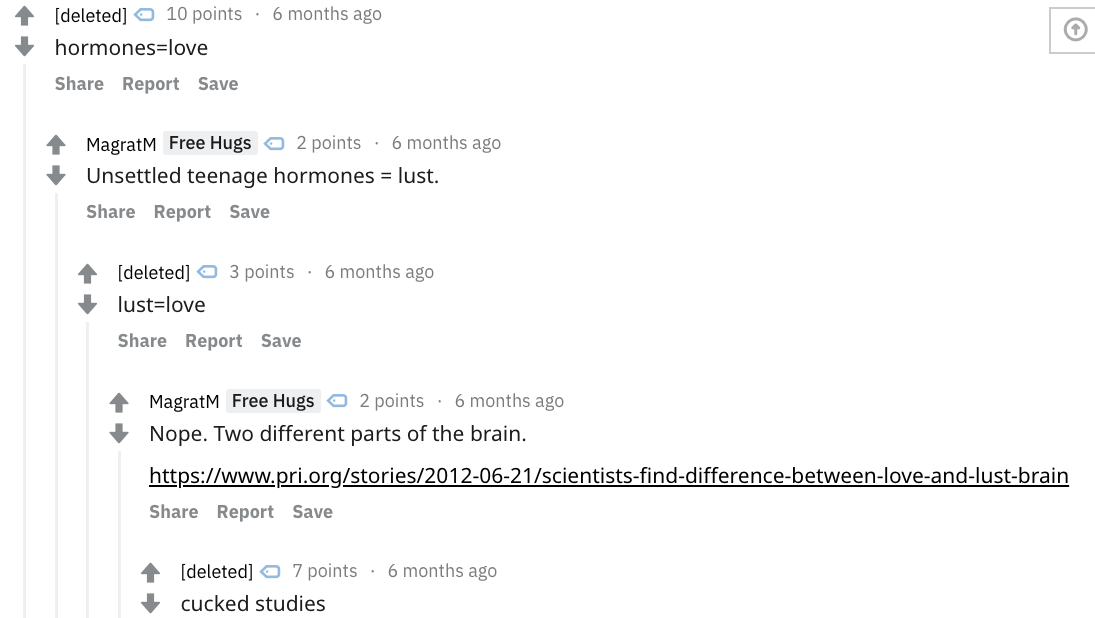 Elsewhere, you can read a dude who maintains that incels are so hung up on teenage love — and its dopamine high — that they can’t enjoy conventional geek entertainment.

Or check out this guy, who wants to persuade us that teenage love “is the most precious thing in life” and writes, all of three sentences later, that fucking is “the one thing that matters the most in life.”

When you read enough of this, a fuller picture begins to emerge — and the more you understand the comment, in the first screenshot of this piece, about “some ancient 25 year old (at best) used up slut.” However incels attempt to garner empathy for the very sharp hurt of teen loneliness, they are never just mourning an absence of carefree adoration, if indeed that enters their calculations.

No, they are grieving the lost access to women — to girls — untainted by previous partners and experiences.

It’s the same resentment that leads men to think vaginas stretch and slacken with the entry of each new penis. It’s a zero-sum game, and getting there first is what counts. Why else would one incel advise another to “move to a country where the age of consent is 13”? That won’t be teenage love, as he’s no longer a teen. It will only be sex with a virginal child.

The innocence they yearn for isn’t theirs, but someone else’s — the female vessel for their hormonal desire. So they’ve discovered a way to hate women twice as much: for “depriving” them of bodily gratification in adulthood, and for not providing them with the kind of fairytale sexual awakening that almost nobody gets, anyway — a perfect, rapturous, nubile (and thus mythical) bliss that may have sent them down a brighter path.

This is their origin story. And is it any surprise that they see the libidinous Stacys, not the virile Chads, as the villains? There are many ways to launder your misogyny, but the stain doesn’t quite come out.