In ‘Industry,’ We Can’t Stop Watching the Money

This Gen-Z HBO series features ambitious new hires at a cutthroat London bank who screw and do a lot of coke. But for them (and us), what’s most addictive is the prospect of rubbing elbows with the very rich

Back in the bad old days of the 1980s, there were TV shows like Dallas and Falcon Crest that followed the exploits of terrible rich people. These primetime soap operas seduced their audience by letting viewers live vicariously through the characters’ myriad scheming, which was inextricable from all the money in their world. Perfect little Reagan-era fantasies of conspicuous consumption, these shows were populated with beautiful men and women all trying to outsmart everyone else, occasionally taking time out to have sex with one another. It was kill or be killed, screw or get screwed.

Portraits of the One Percent have hardly gone away, especially in recent years when shows like Succession and Billions have become a sensation, once again showing us how truly awful people become when they get too close to money. Maybe Succession’s Roy family could have been decent human beings if they weren’t so obscenely wealthy, but then they wouldn’t be the Roy family — that lethal hunger for power was fostered because of their riches. So what’s the appeal for the rest of us? Why do we poor commoners care about these petty turf wars?

Because we’re endlessly curious how the other half lives. Plus, we’re no better than these characters: We’re not immune to the allure of money, either. Even if we don’t have it, we’re vain enough to be charmed when a show invites us to rubberneck in that upper echelon. For an hour every week, we can pretend we’re rich, too.

The HBO series Industry (which premieres November 9th) has a soapy, Succession-like aura, although it doesn’t concern a family — at least not one connected by blood. Set in an elite London investment bank and focused on a group of temporary new hires (or “graduates”) who are trying to win permanent placement, the series follows along as young, hot, ambitious people do drugs, have sex, make deals and try to impress their bosses. The financial jargon is delivered with machine-gun velocity — good luck trying to make heads or tails of it if you’re not steeped in the nomenclature — and the characters’ work-hard/party-harder mentality is just as ferocious. In 1987’s Wall Street, Michael Douglas won an Oscar advocating that greed is good. All these decades later, greed remains as addictive as the cocaine that Industry’s protagonists snort up.

HBO made the first four installments of this eight-episode series available to critics, which will give you a good sampling without necessarily convincing you that you can’t live without knowing what happens next. There are five main characters, each of them starting at Pierpoint & Co., a cutthroat, elite bank and trading house. There’s Yasmin (Marisa Abela), a spoiled princess who seems a little too timid to survive among these sharks. Robert (Harry Lawtey) is the sort of blond, strapping dude you’d assume you’d see dozens of at a place like Pierpoint: He’s cocky, snobby and thinks nothing of staying out all night at the clubs. David Jonsson’s Gus is the most buttoned-down of the graduates, wielding a haughty demeanor that lets everyone know he has higher aspirations — like being Prime Minister. Eager-beaver workaholic Hari (Nabhaan Rizwan) hopes that sheer diligence will land him a permanent Pierpoint position.

But it becomes clear that Industry will be told chiefly from the perspective of Harper (Myha’la Herrold), the sole American among the five. As a Black woman from an unimpressive upbringing — she didn’t attend a top-flight college, and as we’ll quickly learn, she has to hide some embarrassing secrets — Harper feels at a distinct disadvantage to her colleagues. But she’s just ruthless and assertive enough that it may not matter.

Created by relative newcomers Mickey Down and Konrad Kay, Industry initially has the vibe of a reality-show competition in which we see which of our contestants has the stuff to get hired. (One of the characters drops out unexpectedly early on.) But soon, that element of the show becomes less important, instead embedding us in this high-stress environment as Harper and the others fight to establish their niche. Harper’s emotionless boss Eric (an excellent Ken Leung) quickly takes a shine to her: He sees in this fellow person of color an outsider like him who had to prove to others that he belonged. Eric is as close as Industry gets to a Gordon Gekko type, and it’s not even that close. That doesn’t make him any less intimidating, though. Sometimes threateningly clutching a baseball bat as he roams around his desk on the trading floor, he’s an unsmiling, hardass mentor, and he expects results — and Harper quickly discovers what the consequences can be if she screws up.

Of course, sexual frankness is hardly that novel on HBO, nor is the notion that this series is meant to be a generational snapshot. (Sexual assault, sexism and racism are all addressed in passing.) So far what hems Industry in is that, every direction it turns, you feel like you’ve been there before. (Even the indecipherable financial-speak, which the writers don’t bother defining, will remind viewers of Margin Call, the 2011 thriller that similarly wowed us with the intricacies and posturing of the investment world and its complicated terminology.) And the obligatory cautionary tales abound: It won’t shock you that Harper and some of the other characters learn that repeatedly pushing themselves to their breaking point has negative repercussions. (Being young and hungry and powered by stimulants can only defeat sleep deprivation for so long.)

So why keep watching?

For the same reason that those poor schmucks at the end of The Wolf of Wall Street hung on every word Jordan Belfort said about selling that pen. Through four episodes, Down and Kay get you adequately hooked on the whirl of numbers, the swaggering strut of modern salespeople, the intimate dinners where the big deals get orchestrated, that intoxicating feeling that you’re close to the movers and shakers. You can practically smell the money in every shot — not so much from the sometimes-lavish production design but in the very atmosphere of every conversation and every worried look on the graduates’ faces as they contemplate their next move. When the only goal is to get rich, how much money you have defines you. The drugs and the sexual conquests are just additional ways of keeping score. Industry encourages us to play along with its perverse game. 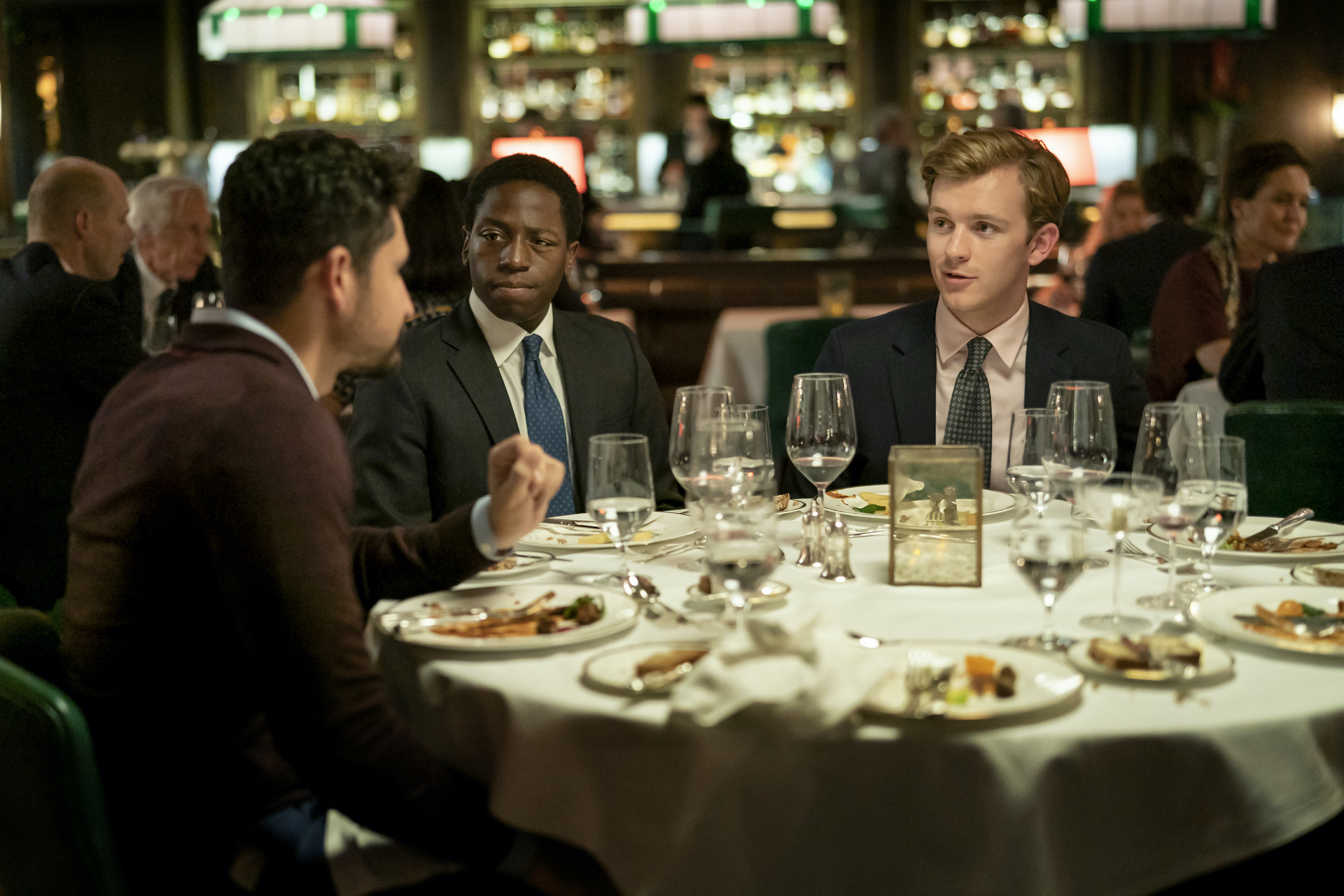 There are no apparent sociopaths on the show, but Industry is clear that people like Eric are the bad guys. (On a few different occasions, periphery characters mention how gross and immoral the banking industry is — and it’s telling that our protagonists mostly nod and agree, having no illusions about the coldhearted profession they’re entering.) But unlike Succession, the show doesn’t flaunt a “Oh, they’re so bad” glee about its protagonists. That may be, in part, because no one on Industry so far has done anything as unconscionable as what happens on that brilliant Brian Cox series. But, weirdly, that turns out to be a weakness of Industry. The characters are obsessed with making a killing, but they’re not memorably monstrous — honestly, they’re mostly just fairly benign young capitalists. (The worst thing anyone does in the first four episodes involves a kinky game of drawn-out sexual torment.)

That said, though, the series’ lack of clear-cut maliciousness is disturbing in its own way. We’ve gotten so used to TV shows and movies that depict the rich as evil that Industry almost seems sweet in its matter-of-fact portrayal of these aggressive social climbers. Like us, the characters are on the outside looking in, wondering what real wealth and power might feel like. Harper and her fellow graduates are just learning the ropes of finance, just beginning to be sucked into the realization that their trades and deals can reshape the world. What’s scary is that these Gen-Z hotshots barely have their own shit figured out. They chase after unhealthy relationships, they conceal parts of themselves in the hopes no one learns the awful truth — and yet they have access to the mechanisms that make the planet’s economic system function.

The most enticing thing about Industry — and the most frightening when considering our actual reality — is that those critical decisions have been put in the hands of fuckable kids strung out on exhaustion, coke and hormones. They’re too young (and too poor) to be truly awful yet. But give them time.