In Defense of Hating Popular Things

Why loudly announce that you don’t care about ‘Avengers: Endgame’ or ‘Game of Thrones’? Because it’s fun — and human nature.

If you love super-popular stuff, then this is the month for you. On April 12th, Disney debuted the first trailer for the finale of the Star Wars saga — and also breathlessly revealed the movie’s title, The Rise of Skywalker. On April 14th, HBO launched the eighth and final season of Game of Thrones. And this Thursday, Disney unveils Avengers: Endgame, the much-anticipated conclusion to last year’s massively successful Avengers: Infinity War.

It’s a heady time for geek culture, which (because it’s been totally absorbed into the mainstream) is just another way of saying there’s lately been a bonanza of immensely beloved franchises out there in the world. And because those things are immensely beloved, you’d have to be living in a cave (or avoiding social media) not to be thoroughly inundated by discussion about those immensely beloved things, as fans eagerly await their arrival and dissect every little morsel of content that comes their way in the buildup to their release.

Amidst all that hoopla, it shouldn’t be surprising, then, that a different group of people took to the internet to let everyone else know, in no uncertain terms, just how little they care about those very popular things. Megan Reynolds, managing editor for Jezebel, declared last week, “I have never successfully sat through an Avengers movie, most likely because my tolerance for superheroes and bad CGI and the lesser Chris (Pratt) is fairly low.” Meanwhile, conservative commentator Ashley StClair put both superhero movies and Star Wars films on blast:

In fact, people seem to really enjoy trumpeting their complete disinterest in popular things, practically wearing their indifference like a badge of honor.

But as Newton’s third law tells us (I’m paraphrasing) for every pissy internet action, there is an equal and opposite pissy internet reaction. As soon as a group of people mocked these popular shows and films, another group leapt to defend the honor of these mega-successful franchises. 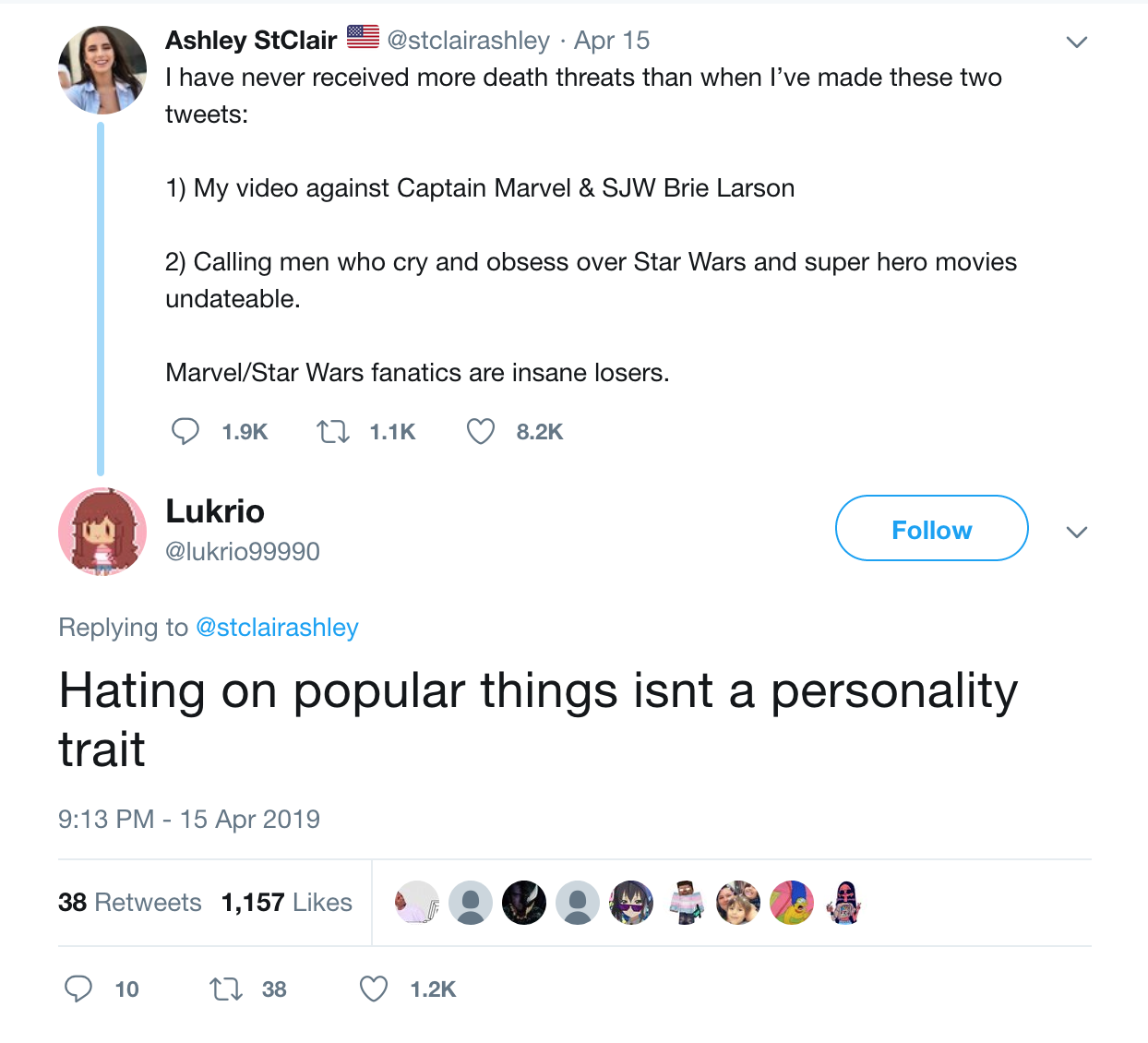 People ought to enjoy the stuff they love. (In fact, “Let people enjoy things” has become a popular Twitter rallying cry to shout down the anti-popular grumps.) The rationale is simple: Life is filled with so much that makes us sad, angry or anxious, and in these dark times, we cling to what we know will give us comfort and hope. It doesn’t hurt you if someone else is a fan of something you don’t like, so why begrudge them their pleasure? As Vanity Fair writer Joanna Robinson put it in the above tweet, “You’re not special and shiny and cool if you go around bragging that you’re above something that brings millions of people joy.” So why be that person?

For the record, I’m not somebody who’s much of a public hater. My general feeling is, hey, if you like something that I don’t, that’s cool — I’m not going to make a big deal out of it. But I’m all for people expressing their disdain for super-popular things. Sure, some of that disdain may be the act of petty, killjoy snobs, but even that has its place — and its value. It’s great to love popular things. But trashing popular things that are bad (or, at the very least, deeply imperfect) is just as great.

When it comes to April’s super-popular entertainment, I see the issue from both sides. I’ve never watched Game of Thrones, so I find its domination of mass culture to be largely amusing. Between that show and The Walking Dead, my Twitter timeline on Sunday nights is often filled with utterly indecipherable, hyperventilating gobbledygook about dragons, zombies, red weddings, this one crazy thing that happened, that one character whose death was so shocking and whatever Arya did in the most recent GoT episode. “Whatever, nerds” is often my response to all those tweets while I sit wondering why none of you are watching something that’s actually good, like ESPN’s Sunday Night Baseball. But I’ve been into Star Wars my entire life and am anxiously awaiting Avengers: Endgame. Clearly, anybody who loved Infinity War as much as I did has no business acting superior to popular entertainment.

I suspect that many of you are as inconsistent in this regard as I am: You’re fans of some mainstream stuff while being utterly disinterested in other stuff. As someone who’s into movies, music and sports, I often see this divide. Lots of my film friends think it’s adorable that anybody would take baseball or basketball seriously, mocking sports fans’ passionate devotion to “sportsball.”

So I wouldn’t be surprised if the “Let people enjoy things” crowd are the same folks who, when the Super Bowl rolls around, make a big show about how they’re not going to watch the Big Game. (And even sports fans are finicky: Guys who love baseball are likely to look down on football, and vice versa.) We all love some popular things while thinking everybody else is deluded for loving other popular things. It’s funny about human nature: The stuff we love has instant intrinsic worth and is, therefore, bestowed with deep emotional value. But everything that’s popular that we don’t like (or never bothered getting into) is clearly garbage — and the people who enjoy it are obviously naïve, basic or just plain stupid. I like what I like because I like it. It’s good because I say so.

There’s an argument to keeping our disdain to ourselves. Raining on someone else’s parade is just spiteful. (I still recall my mom admonishing my sister and me as kids when we made snide comments about someone else’s meal at a restaurant looking gross: “Well, you don’t have to eat it, do you?”) But there’s also something principled about talking shit about other people’s preferences. I don’t mean the person themselves — I mean what they like. (Although eviscerating a friend because of his terrible taste can be fun, too.) When you’re getting to know someone, it’s typical that you might ask them what their favorite movie, book or band is. We can learn something about someone by what they love. Likewise, you can just as easily be defined by what you’re not into.

Let me give you an example, because it just happened as I was writing this. A colleague Slacked me to ask if watch Game of Thrones. I replied that I didn’t. “SMH, Tim,” he wrote back. “How are you a critic!?!?” For him, it was unfathomable that I wouldn’t be up on one of the most critically acclaimed shows of our time. How could anyone who cares about popular culture not be watching Game of Thrones?

Here’s my response to that. If I watched Game of Thrones, I’m pretty sure I’d like it. Thousands of good reviews can’t all be wrong, although I have to say that I’ve sampled other beloved prestige-TV programs, like Barry and Russian Doll, and not nearly been as wowed as I was led to believe I’d be. Those programs’ popularity added to my frustration: This was what people were losing their minds over?

I don’t want to turn this into a debate about this hit movie or that acclaimed show being overrated. We all have different answers for what didn’t live up to the hype. My point is that we’re all susceptible to getting resentful about certain things’ unfathomable popularity. And so it’s understandable that we’d want to lash out, if for no other reason than to announce that we’re not willing to pledge allegiance to the same movie or album that everyone else worships. Sometimes, it’s important to remind ourselves and others that we don’t all see things the same way.

But there’s also another reason to express our derision for certain popular things. Last week, film critic and programmer Nick Pinkerton (who would rather sing the praises of art-house cinema like First Reformed than gush about Ant-Man and the Wasp, although he’s just as willing to champion unloved studio filmmaking such as Welcome to Marwen) wrote a Twitter thread taking aim at, as he called it, “consensus-obsessive LET PEOPLE LIKE WHAT THEY LIKE types.” For Pinkerton, as for a lot of us, the idea that we ought to cheerlead for big studio fare like Avengers: Endgame is a little gross:

Why should we be bullied into playing Follow the Leader? More and more, corporations control our lives, despite their cynical attempts to position themselves as our buddies or personal brands. Accounts like Netflix tweet in the first person, acting like they’re a flirty pal or BFF, not a massive company solely looking after its own interests while trying to sell us things.

Whether it’s Steve Jobs evangelizing about the cult of Apple or comic-book fans waging pointless “Marvel versus DC” wars online, corporations feed off our loyalty, just like professional sports leagues expect us to keep spending money supporting our favorite team out of some fealty to an organization we really have little connection to. (Jerry Seinfeld, a massive New York Mets fan, once famously admitted, “You’re rooting for clothes, when you get right down to it. We’re screaming about laundry.”) And whether we cheer for the Mets, Avengers: Endgame or The Rise of Skywalker, we’re essentially rooting for a brand or a logo or laundry. We’re attaching ourselves to a big, faceless entity that, honestly, doesn’t need us — it just wants our disposable income.

So what’s the solution? Do we all throw our smartphones into the ocean, get off the grid and reconnect with nature? God, no, that sounds terrible. (Have you seen nature? It’s so boring.) But I do think we should be allowed to vent our resistance to the endless marketing and culture saturation of super-popular things — and, conversely, be okay with other people complaining about how lame something we love is.

Last fall, I was one of the few critics who really liked Bohemian Rhapsody, and so I had to spend months hearing people tell me how dumb I was for enjoying that movie — a movie, by the way, that made $900 million worldwide and won four Oscars. Bohemian Rhapsody is the epitome of a super-popular thing, and many, many individuals hated it. Well, guess what? All those people hating it didn’t do a thing to keep the movie from making $900 million and winning four Oscars. And it didn’t change how I felt about the film. But here’s the thing: I’m sure Fox and the film’s producers don’t care how you or I felt about Bohemian Rhapsody. They’re probably all too insanely rich and successful to be bothered with such minutiae.

If you like a movie franchise or TV show that’s incredibly popular, congratulations: Lots and lots of other people agree with you. Avengers: Endgame can take the hit if your buddy thinks it sucks. More importantly, you can, too. It’s a little strange that we all get so defensive when other people don’t like what we like. Why would we even want other people to dig all that same stuff that we do? Then they’d be us, and that’s our job. I say, let people enjoy hating things.