The Oscar-winning screenwriter’s latest film, like all his best work, is about the frightening feeling of being trapped in one’s own head

It will not surprise you to learn that the young woman who’s the main character of I’m Thinking of Ending Things starts off the film by talking to herself. This is a common occurrence in the work of Charlie Kaufman, the Oscar-winning screenwriter of Eternal Sunshine of the Spotless Mind and the writer-director of Synecdoche, New York and Anomalisa (which he co-directed with Duke Johnson). His protagonists are often wrestling with their inner monologue — and even when they’re not, they walk around the world trapped in their own head, unable to beat back the despairing thoughts rattling around in their skulls. The mind is a prison in a Charlie Kaufman film, and there’s never hope for parole.

The young woman is played by Jessie Buckley, who’s in the passenger seat as her newish boyfriend Jake (Jesse Plemons) drives them so she can meet his parents. It’s a cold, snowy day on the Oklahoma highway — you can barely see out the windshield — and her internal dialogue is more active than her conversation with this guy. We piece together important details — they’ve been together about two months — but other key facts stay mysterious, like this woman’s name. Their relationship doesn’t seem particularly warm, and as we hear her thoughts, it becomes clear that she’s not entirely enthused about staying with this guy. But the truth is, she’s not enthused about much of anything. Mostly, she’s lost in her thoughts.

Early on in I’m Thinking of Ending Things, she tells herself, “Jake once said, ‘Sometimes the thought is closer to the truth, to reality, than an action. You can say anything, you can do anything, but you can’t fake a thought.’” Over the course of the next two hours, she’ll learn just how powerful thoughts can be.

I was advised before seeing I’m Thinking of Ending Things not to read anything about the film — or the 2016 Iain Reid novel on which it’s based — and I think that’s excellent advice for anyone who’s curious about this absorbing, confounding, ultimately fairly terrific film, which comes to Netflix on September 4th. It’s not as if Kaufman’s psychological drama has a lot of plot twists or third-act surprises — it’s not really a question of spoilers. But what makes the film so unsettling is its inscrutability, its ability to keep changing as you watch it. Kaufman’s earlier, equally anxious work has in some ways prepared us for this movie, which might be described as a horror film, albeit one where there are no kill scenes, ghosts, blood or bogeymen. Much like Buckley’s character, we get trapped, but the real cage is what goes on inside our brain as we’re watching. I’m Thinking of Ending Things is about a lot of things, and it’s up to you which one you want to obsess nervously over.

After an extended opening passage with just the woman and Jake in the car — talking aimlessly about whatever, yet slowly but imperceptibly building in friction — they arrive at the remote farmhouse where Jake’s mom (Toni Collette) and dad (David Thewlis) reside. (They don’t have names, either.) Stuck in the middle of nowhere as the snow comes down hard outside, the young woman notices that there’s something a little peculiar about Jake’s folks. The mom laughs a little too loudly. The dad is a little prickly. It’s almost as if they’ve been cooped up too long in that old, slightly spooky house — someone needs to open the windows and let some air into the place.

Ever since 1999’s Being John Malkovich, which was directed by Spike Jonze, Kaufman has conditioned viewers to expect surrealism to assert itself within his depressive, seemingly realistic stories. In that film, the ability to go inside the consciousness of revered Oscar-nominated actor John Malkovich was quickly treated as no big deal — just like Eternal Sunshine’s nonchalant revelation that there was a company that could help erase memories of a bad ex. In Synecdoche, New York, Philip Seymour Hoffman’s theater director essentially remade his reality as part of his ambitious new project, turning life itself into an intensely complicated stage piece. Kaufman thought nothing of adapting Susan Orlean’s nonfiction book The Orchid Thief into Adaptation, in which Charlie Kaufman (Nicolas Cage) and his goofy twin brother (also Cage) debate the relative merits of preserving one’s artistry in Hollywood. The man’s movies are very funny, very strange and deeply, deeply sad — and they seem to be a psychic X-ray of the fragile man who crafted them.

A large part of the appeal of Kaufman’s movies is that we’re well-acquainted with his self-critical, permanently defeated persona. If Eeyore had a knack for audacious movie premises — if he was a genius and not a stuffed donkey — he might be Charlie Kaufman. In a recent New York Times profile, Kaufman was asked how he was doing. “I think I’m the same, but I’m always anticipating the next thing,” he replied, and while he was presumably talking about his mental state in relationship to the pandemic’s shifting uncertainty, the quote sums him up nicely. Like his characters, he’s waiting for something bad to happen.

If you’re on Kaufman’s wavelength, you’ll be fully prepared for I’m Thinking of Ending Things, which shares with his earlier work an abiding fascination for how melancholy life is. As is often the case with Kaufman’s movies, there are two films going on simultaneously here — the one inside the young woman’s voiceover, and the one she observes around her — and it’s never entirely clear which is more forlorn. But the longer she stays at the parents’ house, the more apparent that something seems to be happening to the reality around her. Was that a picture of her as a girl on the wall? Or did she just imagine it? And why is the basement door locked up like that?

Meeting your significant other’s parents can be a nerve-racking experience, and it’s proved to be fertile comedic material for movies as different as Meet the Parents and Get Out. These types of films speak to a universal dread of being judged unworthy by our loved one’s progenitors — or, conversely, a fear that something abhorrent in the parents will hint at an equally monstrous quality within the person we think we adore. With its dark, wintry setting and foreboding tone — inexplicably, neither the woman nor Jake wear a seatbelt during the entirety of their long drive to the farmhouse, hinting at the potential of imminent danger — I’m Thinking of Ending Things constantly prompts the audience to prepare for doom. But the film is far more complex than a simple “in-laws can be a nightmare” satire. Ultimately, it’s a movie about being trapped with yourself, convinced that there’s something wrong with you, your boyfriend, everything around you. 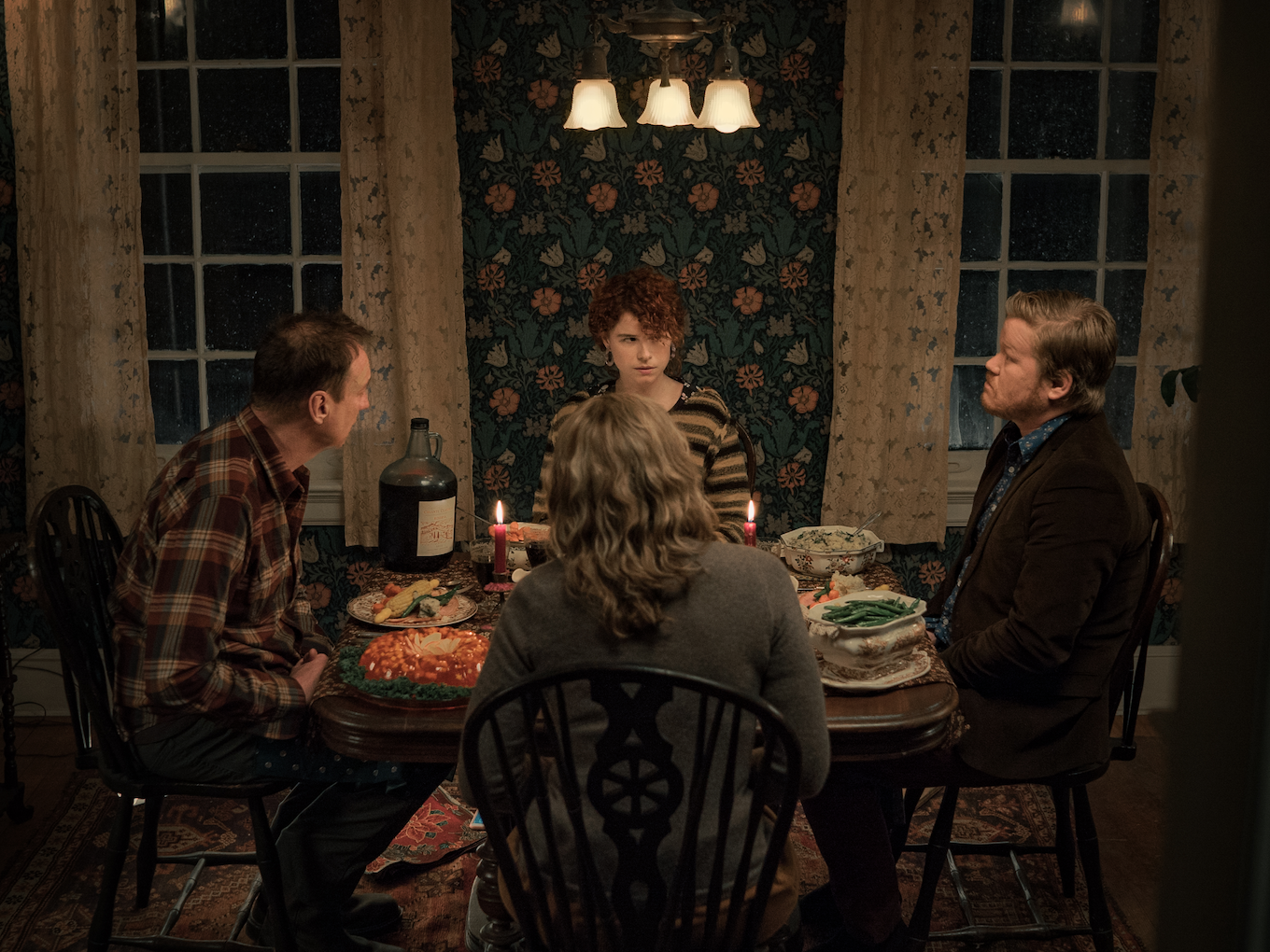 As with much of what happens in I’m Thinking of Ending Things, Kaufman and his actors shade things in such a way that, seeing the movie through the young woman’s eyes, we’re not sure what to make of certain plot developments. Because she has such a negative view of everything, it colors her interactions with the family members — and it seems to influence her interpretation of what starts to transpire. Are they holding her captive, or is she just being paranoid?

Like no movie in recent memory — perhaps not since Anomalisa, which used stop-motion animation to personify crippling depression with bittersweet accuracy — I’m Thinking of Ending Things communicates the internal inertia that infects people when they get overwhelmed by their own stinking thinking. The problem for this young woman is that her bleak worldview leaves her unable to navigate what might be a legitimately scary environment. (Plemons, Collette and Thewlis are all perfect at playing a completely ordinary American Midwestern family — they’re so outwardly wholesome that they give you the creeps.) But because everything in the woman’s mind is gray clouds and downbeat sentiments, the film’s growing unease seems to be a manifestation of how drearily she sees things. Maybe, like Jake suggests, sometimes the thought is closer to the truth.

I’m Thinking of Ending Things is the sort of film that will inspire lots of explainer articles and videos that will laboriously theorize what this odd digression means or what the movie’s audacious ending represents. But to literalize a movie that’s one spectacularly twisted headtrip is to rob it of its point — and its power. For all of us who’ve been accused of thinking too much, I’m Thinking of Ending Things feels like a cautionary tale. Like many Charlie Kaufman characters, the young woman cannot get out of her head. And because she never opens the windows of her mind, the terrors never get let out. The farmhouse is just another prison, but it’s not the one that really ensnares her.