Ranking IHOP Breakfast Items by How Healthy They Are

Whether you need breakfast for your kids or have a stoned craving for cereal-jammed pancakes, IHOP has you covered. But if you want something healthy, you may have to perform some menu gymnastics. For guidance, I asked nutrition researcher and processed food addiction counselor Joan Ifland to help me rank IHOP menu items by how healthy they are — from reasonable to death by pancake.

Pass the syrup, and pay attention. 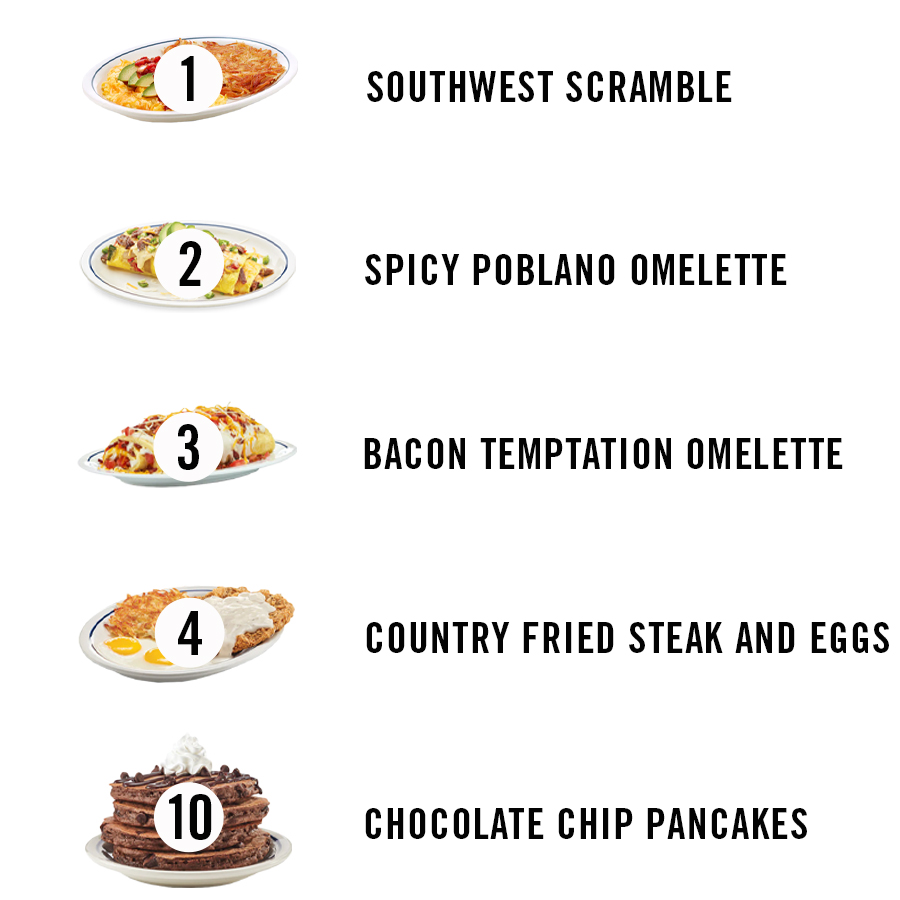 1) Southwest Scramble: The combination of scrambled eggs, cheese, salsa and avocado provides “good protein and vegetables,” says Ifland. Notably, salsa delivers a healthy dose of vitamins that keep your body functioning well, and avocado yields fats that strengthen your heart health. While the Southwest Scramble comes with your choice of a side dish — a tortilla, toast or fluffy buttermilk pancakes — Ifland says, “Skip the side dishes, and get a box of berries on your way home.” That way, you get more vitamins and fewer empty calories.

2) Spicy Poblano Omelette: Similar to the Southwest Scramble, Ifland says the Spicy Poblano Omelette provides “good vegetables,” including onions, bell peppers, and of course, poblano peppers. “Spices contain micronutrients,” she adds, which is another bonus, as is the avocado garnish. Also, spicy foods have been shown to boost metabolism and suppress appetite, which may stop you from ordering an additional side of pancakes.

3) Bacon Temptation Omelette: This bacon-loaded creation has unhealthy written all over it, which goes to show just how hard it is to eat well at IHOP. Still, Ifland says, “Bacon is a good source of protein and healthy fats, but it’s likely cured with a lot of sugar.” Sugar, of course, is one of the unhealthiest things you can eat. Also, to be clear, while bacon does lend some healthy omega-3 fatty acids, it also contains tons of saturated fats, which can raise your cholesterol levels, increasing your overall risk of heart disease and stroke. But hey, the Bacon Temptation Omelette is garnished with tomatoes, which is something.

4) Country Fried Steak and Eggs: The best thing about the Country Fried Steak and Eggs, according to Ifland, is “lots of protein to fuel your morning.” However, she recommends skipping the gravy, which adds unhealthy fats and calories, and scraping off the fried coating, a source of dangerous trans fats. At that point, though, you basically just have eggs and steak, which you could probably just order instead.

5) Chicken and Waffles: Ifland suggests skipping the waffles, which are basically just empty calories, and relying on protein in the chicken to at least pretend you ordered something healthy. But again, you might as well just order grilled chicken at that point.

6) Buttermilk Pancakes and Swedish Crepes (tied): Ifland says these dishes are both “made up of addictive ingredients, such as flour, gluten, sugar and salt.” While there are eggs in the batter, she explains that they provide no “meaningful protein.” So, without any real substance, Ifland says these dishes will only “set you up for cravings all day.” Bummer.

8) Stuffed French Toast: According to Ifland, the Stuffed French Toast is “a bit worse than the pancakes and crepes due to the addition of sweetened dairy,” which provides more sugar and could certainly pose problems for the 75 percent of our population with lactose intolerance.

10) Chocolate Chocolate Chip Pancakes: Besides being a sugar explosion (again), Ifland says, “This dish adds in caffeine, which impairs the nervous system. Caffeine has been shown to block calmness functions,” which is a nice way of saying caffeine will make you stressed as hell, bro. In other words, this is what I was talking about when I said “death by pancake.”

And that about does it. If you want to order healthy at the International House of Pancakes, start by steering clear of the pancakes.

Now don’t even get me started on the Big IHOP Pancake Burger.