Actually, the Internet Is an Iceberg

Famously, there is much more to an iceberg than what we see floating before our eyes. When the RMS Titanic struck the iceberg that caused it to sink, it happened below the surface of the ocean. Unbeknownst to the crew, the ship’s hull was torn open by an underwater spur of ice.

Sigmund Freud used the analogy of an iceberg to elucidate the difference between the observable activity of our conscious mind and what happens in our deeper, larger, subconscious psychology. Later, the American anthropologist Edward T. Hall would extend this principle to culture itself, arguing that stuff like food, art, fashion, language and holidays make up just the visible 10 percent of what’s really going on in society, with the rest of the iceberg composed of the internalized beliefs, values and systems that shape our behavior.

And now, of course, meme creators have their own dazzlingly overcomplicated take on the enduring symbol of the iceberg. 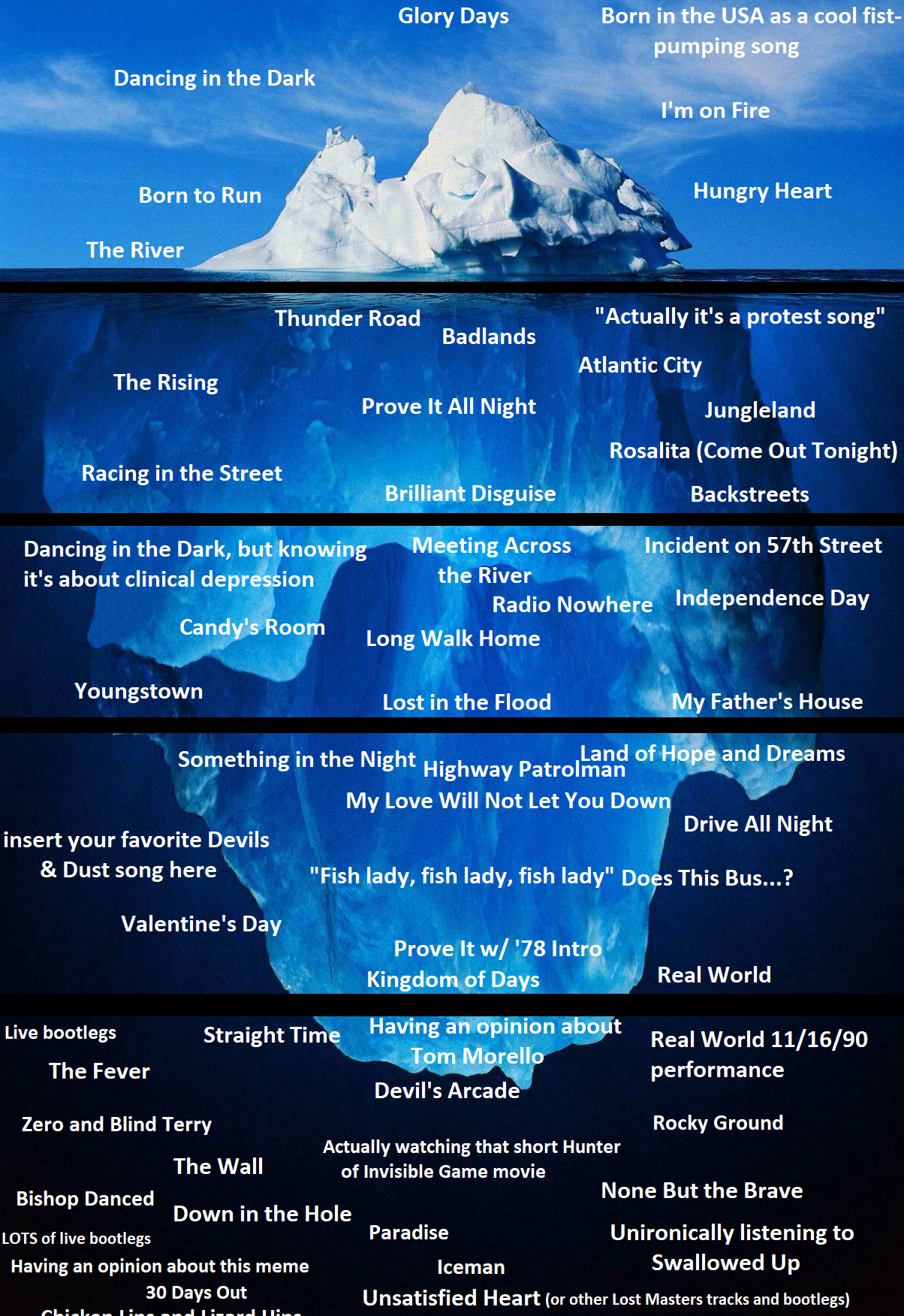 Here we have what I hope is a somewhat accessible instance of the form: a Bruce Springsteen iceberg. The various tiers mark out levels of fandom, and the lower you go, the more invested and knowledgeable a fan you are. At the exposed, superficial peak of the iceberg, you’re a dope who thinks “Born in the U.S.A.” is a patriotic anthem, but if you delve further, you realize the bitter irony of the song (it’s about a Vietnam veteran who finds there is no life waiting for him at home). Even then, you’ve only dipped a toe in the water, and barely explored the Boss’ discography, let alone become obsessed with bootlegs and tracks off his early 1990s records. All the way at the bottom of the iceberg is the condition of “Having an opinion about this meme,” which is, of course, impossible unless you’re well-acquainted with every last reference on it.

We often speak of internet “rabbit holes” — the long and winding paths an idle curiosity will start us on. By clicking and clicking, we’re slowly initiated into niche forums and crackpot theories, forgotten history and obscure artifacts. However, as the iceberg meme above demonstrates, it’s probably more accurate to think of the web as an iceberg: There are the obvious parts that everyone knows about, and they rest on a hidden ecosystem of content and communication. What we ultimately see on Facebook is determined by forces we tend to overlook, just as Springsteen’s biggest hits are merely the conspicuous parts of a musical evolution that spans decades.

Similarly, the shallower kind of conspiracy theories that spread on social media can be unwitting expressions of older and baser concepts. The popular demonization of George Soros as a left-wing puppetmaster, for example, derives from a source of plain anti-Semitism, but it’s far more palatable in the mainstream than Holocaust denial. Without knowing the ideological depths of its origin, a Fox News addict may not recognize this smear for what it represents. 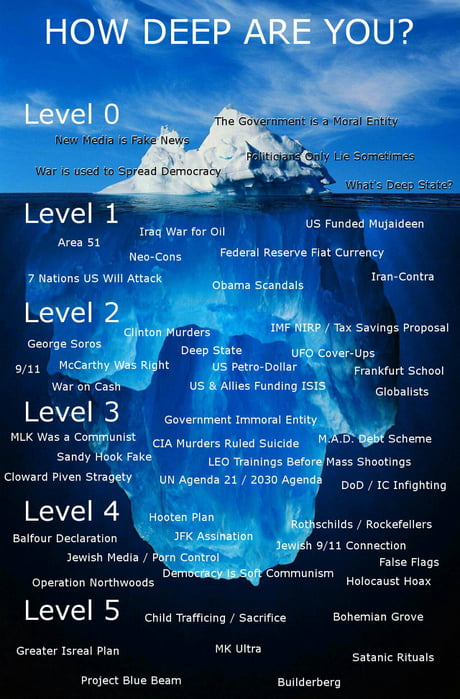 Turns out Freud and Hall gave us an invaluable template for understanding digital spaces as well as analog culture and the inner workings of the psyche. Nothing is ever just itself, or apart from the whole — it carries a great underbelly beneath. Therefore, any subject can be rendered as an illuminating iceberg: anime, death metal bands, Sonic the Hedgehog gamer lore, Garfield, world history, national flags, Star Wars, bananas, Netflix, classical music, Les Misérables (specifically the musical), the city of Philadelphia, political manifestos, sad movies, TikTok and Christianity have all been done already.

While the purpose of creating these is to reveal how anything simple or familiar in fact extends far below the floor of casual perception, there is also a satire of gatekeeping at work: The iceberg charts are said to have originated on 4chan’s /x/ or “Paranormal” board, where expertise in arcane “truths” — some being ridiculous conspiracy theories cooked up by the anons themselves — is the measure of coveted insider status. The more illegible and incoherent the meme, the funnier it is as a claim to total enlightenment.

Fortunately, human beings aren’t omniscient (what a burden that would be!), so no such diagram is complete. Thorough as you are, anyone else attuned to the topic may come along to point out what’s missing — that your supposedly full iceberg is merely the tip of another, grander, mysterious iceberg, its ultimate secrets concealed in the water that light doesn’t penetrate. The iceberg metaphor has always served to make us humble, whether it’s the story of the Titanic or a concept of the soul. We have to accept that some things are beyond us. But that won’t stop us from cataloging whatever isn’t, even if it leaves us more confused in the end.